In most cities, skate parks are still being built in the outskirts, in order to avoid potential conflicts between skaters and other public space users. They are hardly ever integrated into their environment, resembling an isolated set of strange artefacts that have been simply placed somewhere. The distance to the city, as well as the difference in shape with respect to traditional public spaces, keep skate park users and city residents apart and impede any interaction between skate parks and the urban landscape that surrounds them.

The Landskate Parks have changed this dynamic and have become a new and contemporary alternative of public space. They are not a sports area, a street, a square or a park…they are meant to be all these things simultaneously. These new meeting points unite both skaters and pedestrians, encouraging their interaction and helping potential conflicts not to arise. Their users are not only youngsters or adults who rekindle or continue their passion for skating, but also children who skate for the first time and parents that accompany them and increasingly, tourists from all over the world that come to Barcelona who are amazed by the immense street style possibilities the city has to offer.

It’s important for skaters and passers-by to find their own space, in order to feel comfortable. The skating elements have to be technically suitable and well adapted to all disciplines and levels, but not only that: the facilities have to be perceived by all as a part of the city through which they walk. In these Landskate Parks, all the elements are interconnected and they generate more complex systems that establish direct continuity with their environment. These new public spaces are not seen as isolated objects in the landscape, but as a non-detachable part of the area in which they are placed. They take on the textures and colours around them, connecting with the existing routes and allowing vegetation to approach them and embrace them.

Aureà Cuadrado Urban Sports Park (Les Corts)
Aureà Cuadrado Urban Sports Park is set out entirely as a skate square. The initial program requested the replication of a few famous skating spots from the city of Barcelona: the Macba wall, the platforms on Paralel, the curved tables at the Plaça dels Països Catalans or the slanting surfaces in Arc de Triomf. The project works within the limits of scope of intervention, making use of changes in level and retaining slopes, in order to place the skate elements, which are linked together according to a common sequence and language. In order to establish a strong continuity link with the surrounding landscape, the interior routes of the park remain untouched, the existing vegetation is brought closer to the interior and the materials used for the project are the same materials previously used in the area: concrete and Corten steel.

Nou Barris Urban Sports Park
The new Urban Sports Park in Nou Barris is located above a covered section of the Ronda de Dalt, one of the biggest traffic infrastructures in Barcelona. It is a renovated old skate run of which only a part was in use. There has been a long process of public participation, in which the co-operation of local users ha s been crucial in order to create a skate run that adapts to their needs. The skate park has three consecutive bowls, the mythical hellcurvin (the bowl that became famous world-wide through the great skater Tony Hawk’s computer game), a street area with multiple skating elements and a snake run. All the elements are linked with each other and with their surroundings, establishing a relationship of continuity with the public space in which they are placed, enabling the interaction between users and bystanders. In this project, due to the location’s large restraints, we have not worked with the vegetation but with the concrete’s colour, searching for a chromatic continuity with the soil of Collcerola Park which, almost touches the skate park at this point. We have tried to make the area look more gracious, reducing the impact of the existing terrace and playing with the artificial topography, in order to create an area with amazing shapes.

Mar Bella Urban Sports Park (Poble Nou)
Mar Bella Urban Sports Park has been designed as a multipurpose skating area. It is thought of as an artificial topography, a set of dunes and paths that follows the strategy of Poble Nou Park. The project is adapted to the terrain and makes use of its slope, allowing the long skating run from the city towards the sea front. At the top, closer to the road, there is a street area with benches, walls and handrails, that operates as an entrance door, along with a large bench that serves as a meeting point and viewpoint from where to start the descent. The next element, the snake run, is formed by a topography that allows long run skating with surfing-like movements. At the bottom, where the park just touches the dunes, there are two intertwined pools of different geometries and levels of difficulty. On both sides, there are benches and terraces to enhance the spot as a meeting point and a rest area, not only for users but also for people who are walking through Poble Nou park, or for those who are going or coming back from the beach.

El Prat de Llobregat
The skatepark is situated in a square, away from the urban center, where a group of wood and resin prefabricated skate elements already existed. The facility is considerably extended, recovering, on one hand, the existing elements and providing, on the other hand, with a new area of street league, a bowl and an beginners area. This skatepark has become a new meeting point for neighbors and users of all disciplines and different levels, thus revitalizing an urban space with mainly industrial uses. All this is articulated and organized to improve the surrounding public space as well, achieving a better integration of the new skatepark in the landscape of the city. 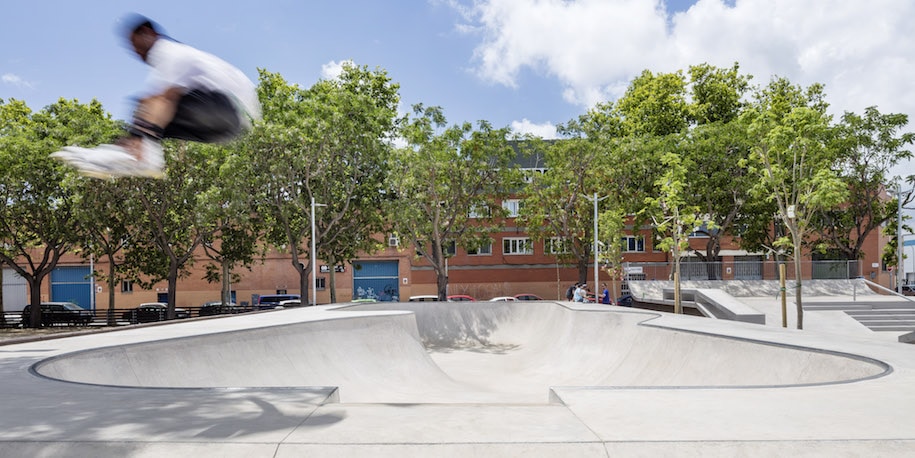 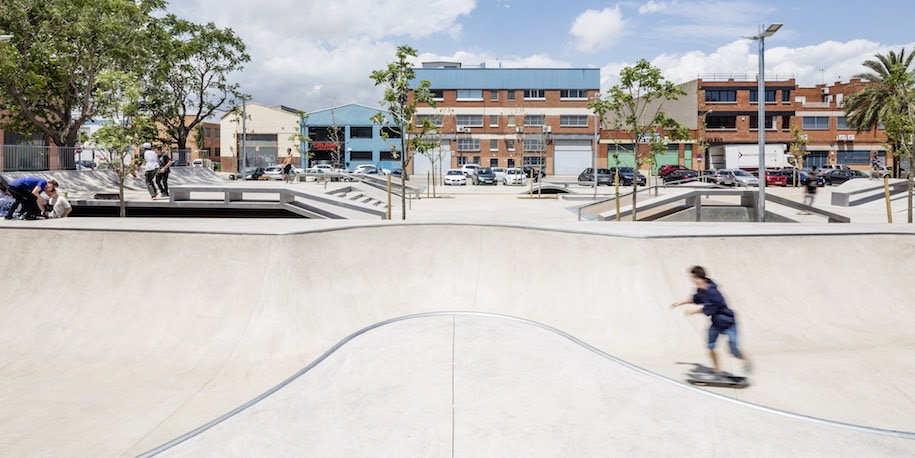 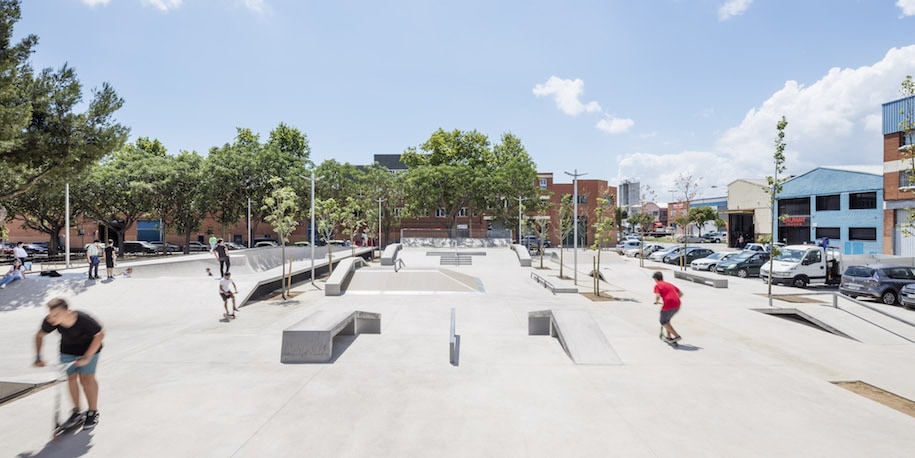 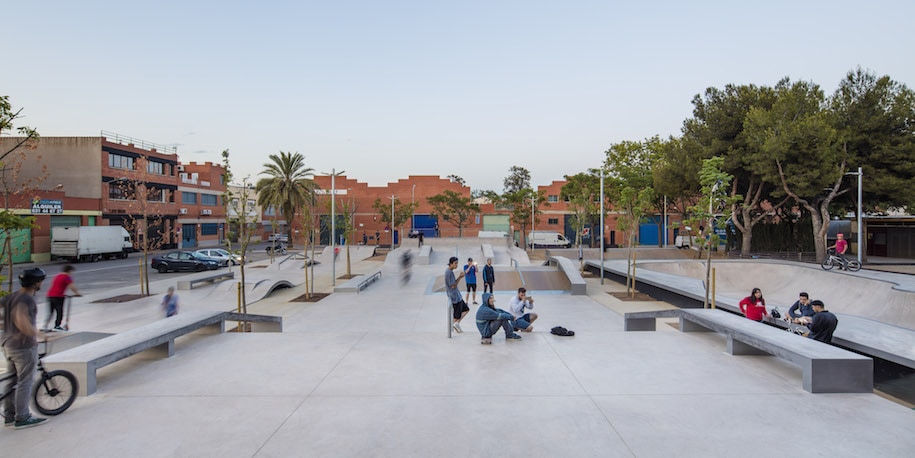 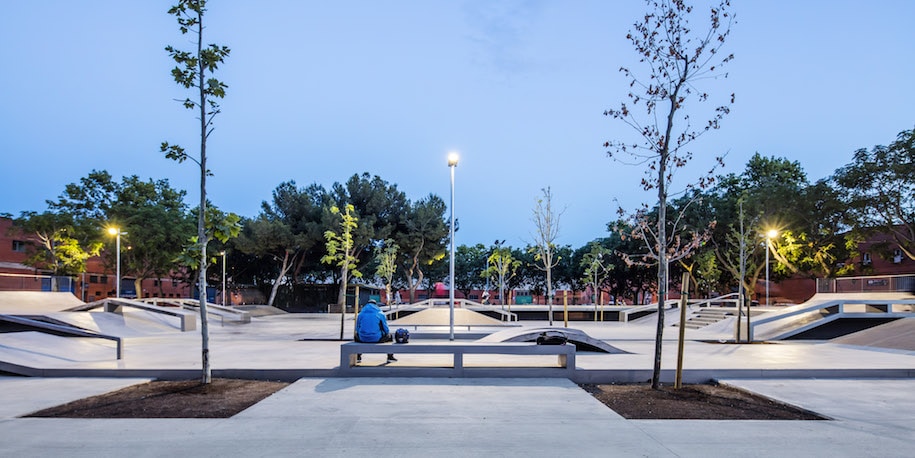 Baró de Viver
The Baró de Viver skate park lies within a residuary area of the large road junction of Trinidad, in the city of Barcelona. The presence of the surrounding intertwined roadways has inspired the general geometry of the design, which permits closed circuits in several lines. It is a multi-purpose skate with street elements such as walls, inclined planes, stairs, steps, platforms, benches, handrails, etc… Other particular elements, to give personality to the new skate park, are also introduced. Some of these elements are:  the pump track, the curved sushi plate, a snake fragment and the iguana tail. 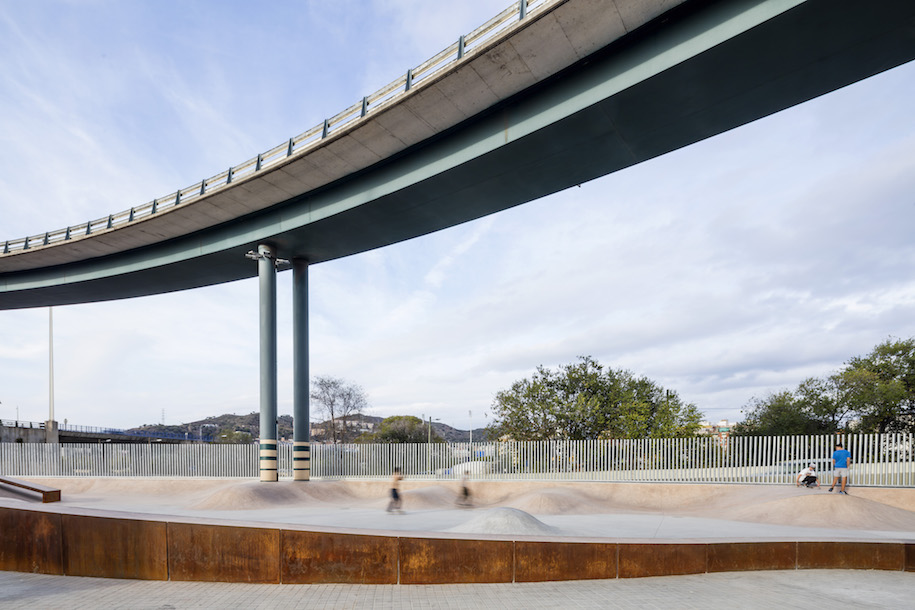 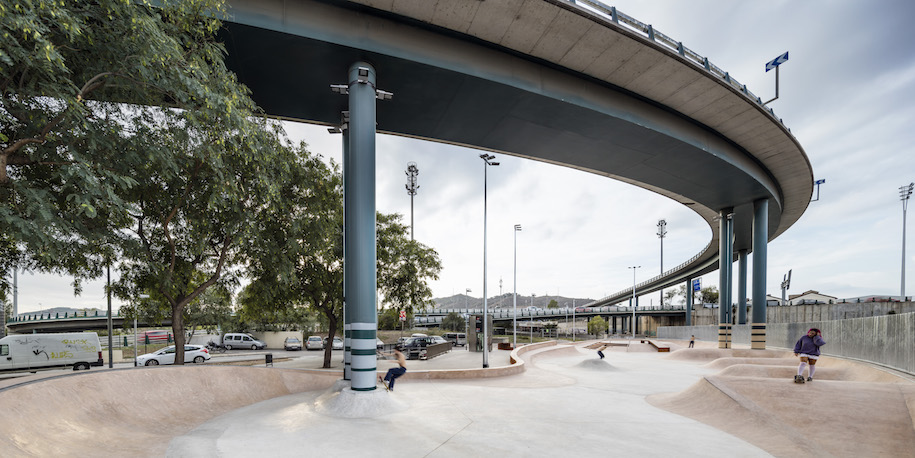 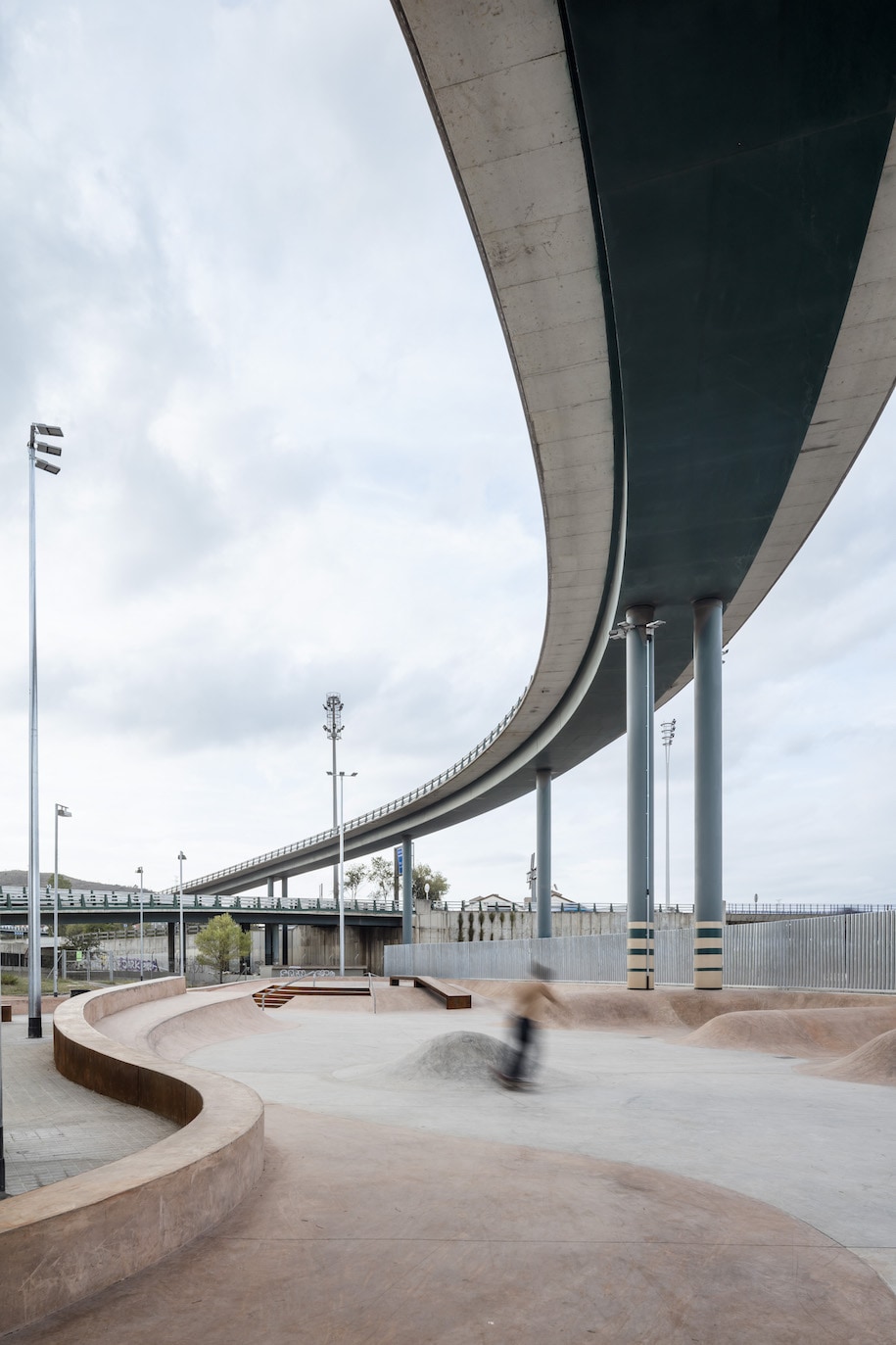 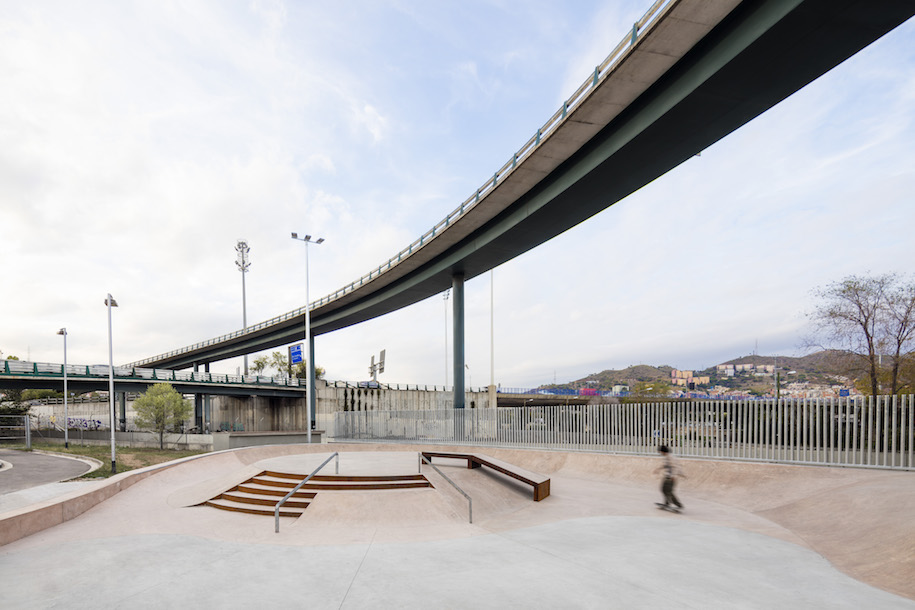 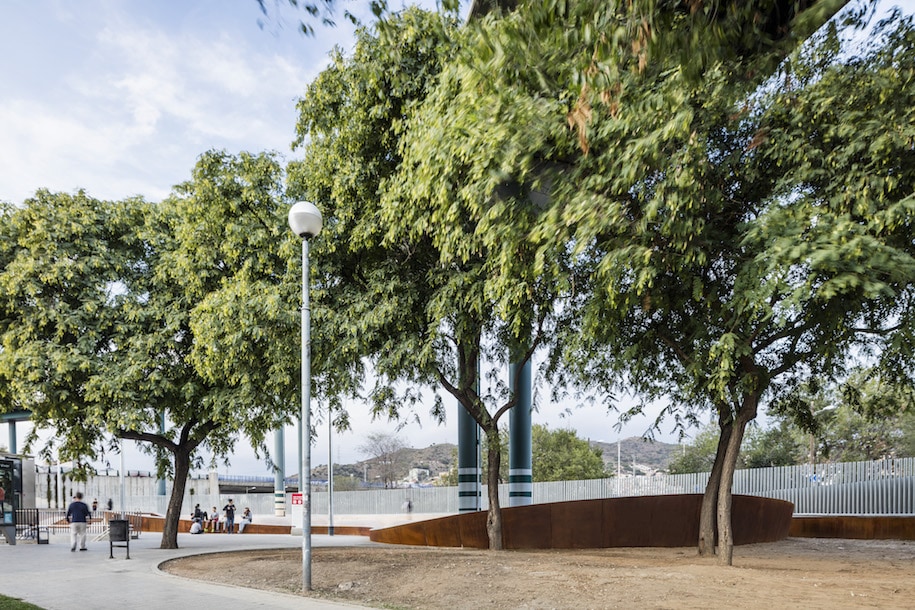 about SCOB – Sergi Carulla and Oscar Blasco are landscape architects. They founded SCOB Arquitectura y Paisaje in 2005. They teach at the Escuela Técnica Superior de Arquitectura of Barcelona and at the Italian Centre of Architecture in Milan. Their work has been recognised internationally through awards, contests and specialised publications. At present, they investigate landscape through other disciplines that go beyond architecture, such as cinema and literature.

The rights of the images are the property of Adrià Goula.

How does K-Studio, headed by Dimitris Karampatakis create the Architecture of Enjoyment?

"Wedge" residence designed by Facade architectural office, in the island of Lefkada, Greece.

by VALIA KAVALLAArchisearchhttps://www.archisearch.gr/wp-content/uploads/3.Wedge_Northeast-View-Zoom-370x700.jpg
SHARE THIS PAGE
WITH YOUR FRIENDS