PERISCOPE is the YES!Hotels antidote to the ordinary city hotel. Modern minimalism and award-winning architectural design create a Young, Energetic and Seductive urban haven, right at the heart of Kolonaki. The original building, from 1950, is now a tribute to clean lines and uncluttered spaces, balancing ergonomics with urban aesthetics. Form, color, and texture create a feeling of order and tranquility.

A creative idea of decaARCHITECTURE, Periscope is conceptualized as a container of surveillance installations. These installations are both interactive mechanisms and works of art. They allow guests to experience and scan over the city in various ways. Capturing the new urban conditions, with the omnipresence of surveillance cameras, Periscope plays on the theme of “periscopic” observation. The architects coordinated a team of artists, industrial designers, programmers, 3D animators, graphic designers and audiovisual experts to produce 13 site specific installations, which vary in scale and medium and multiply guests’ ‘eyes’ and ‘vision’. 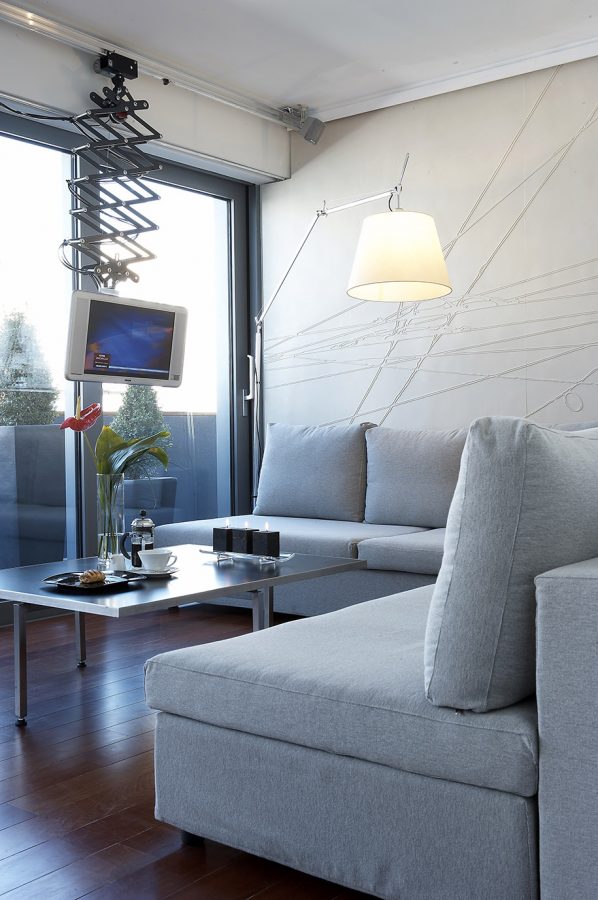 The philosophy of being at the center of action is expressed by Periscope ’ s ideal location and various stimuli which can be found in its spaces.

In the rooms, different images of Athens offer the viewer an imaginary trip in the city’s streets. This visual “puzzle” is completed in the Penthouse Suite. There a panoramic view of Athens in all its entirety can be found. The sense of “periscopic” surveillance is present in other areas of the hotel as well. Periscope’s guestrooms and public spaces boast specially commissioned art on the theme of a periscope observing, recording the buzzing metropolis.

Foremost is the custom-made periscope which captures a spectacular 360 degree view from the hotel’s top floor, relaying the images back to the ground floor bar and projecting them on two screens. Guests control the camera’s movement and hence the panoramic view from above through a specially designed joystick. PAN-TILT-ZOOM and see Athens for yourself.

Periscope has 21 rooms. Among them 4 Junior Suites and 1 luxurious Penthouse Suite, each following current trends in urban architecture and equipped with high quality facilities. The Penthouse Suite boasts a roof top Jacuzzi which captures Acropolis, Lycabettus and the rest of Athens in a truly panoramic view.

YES! Hotels will support ESO Conference 2017 by offering accommodation to its renowned speakers!