Architects Konstantina Tzemou and Tommaso Bernabò Silorata of DEPÓLIS design, architecture and urbanism practice along with architect Ninoslav Krgovic won 1st prize in the Conceptual Urban and Architectural Design Competition for the Independence Square in Podgorica, Montenegro proposing a multi-layered, transformable urban public space which speaks of a new flexible “commons” that adapts to diverse social, cultural and seasonal circumstances. 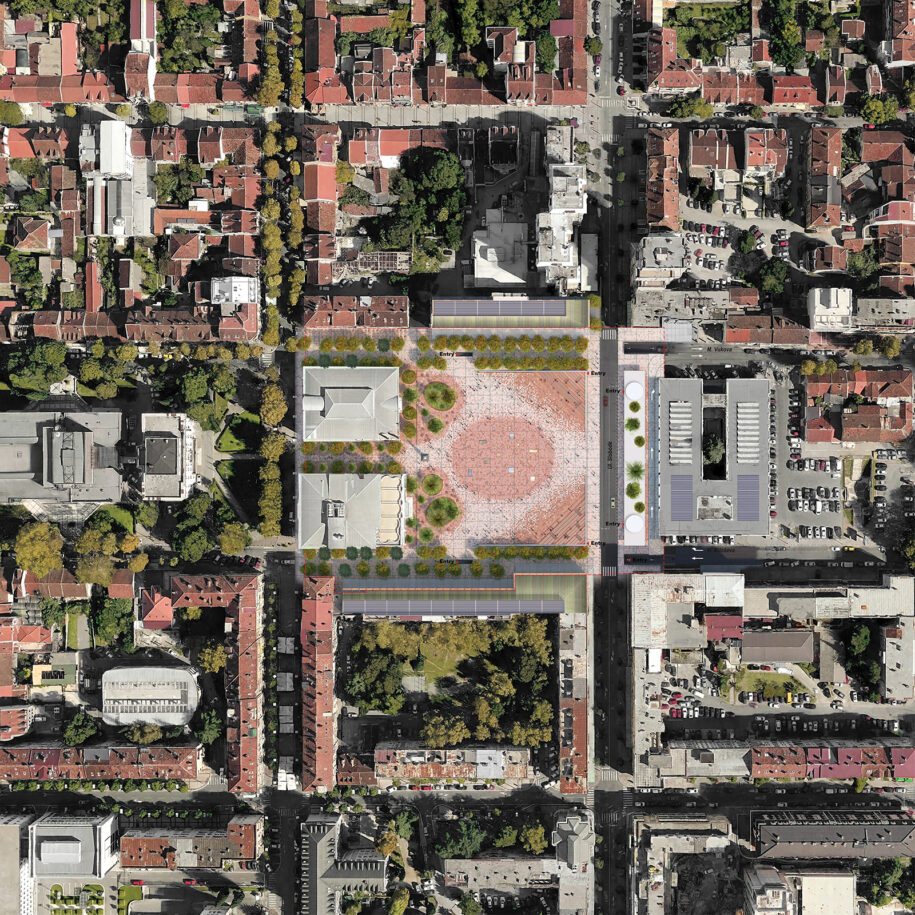 The proposal for Independence Square builds a strong spatial identity for the city of Podgorica by shaping an open-ended and inhabited landmark on site. The new Independence Square works as a multi-layered urban infrastructure that densifies the programmatic uses on site in order to achieve rich public life 24/7. The inherent urban characteristics of the space are enriched to create a new flexible “commons”, a transformable public space that adapts to diverse social, cultural and seasonal circumstances. 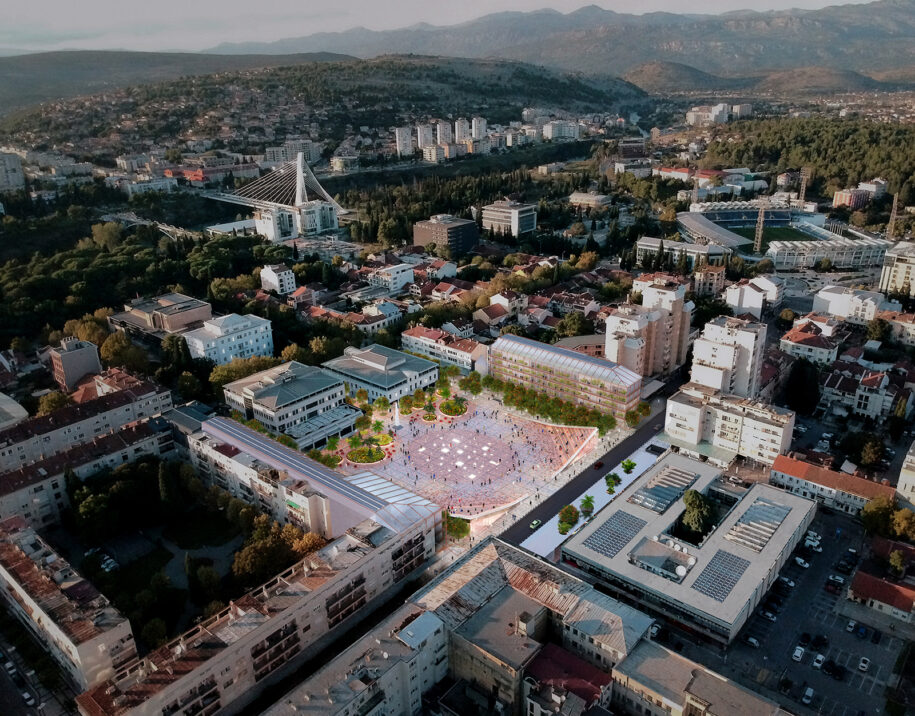 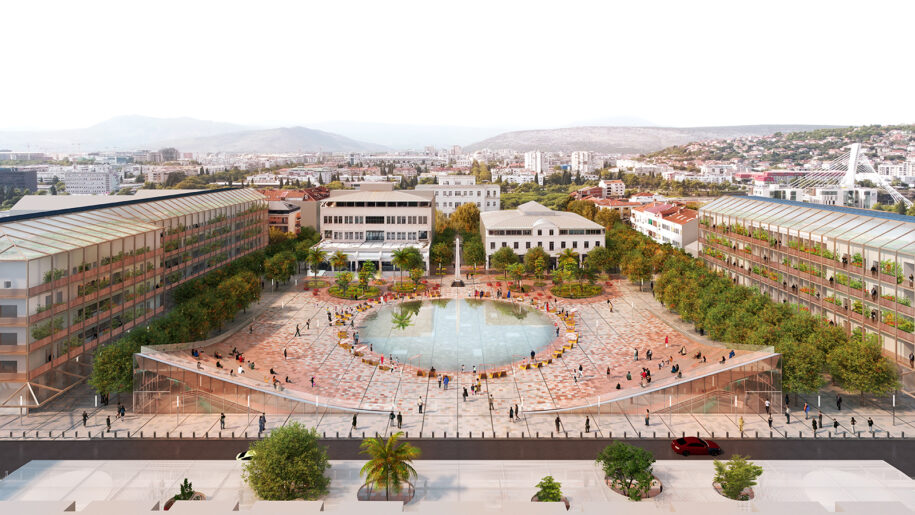 By establishing seamless connections between the levels of the city, Independence Square will function as the new epicentre of a continuous open-space and pedestrian network around the city of Podgorica. 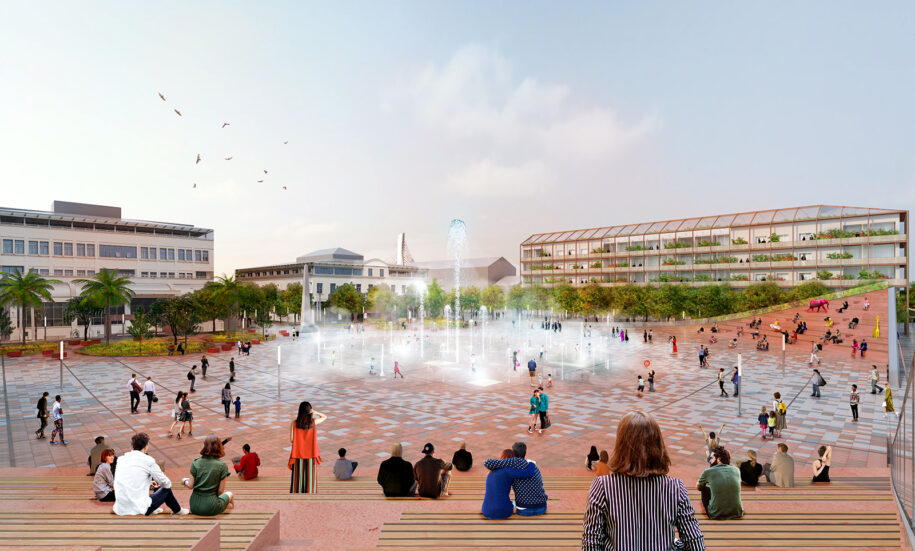 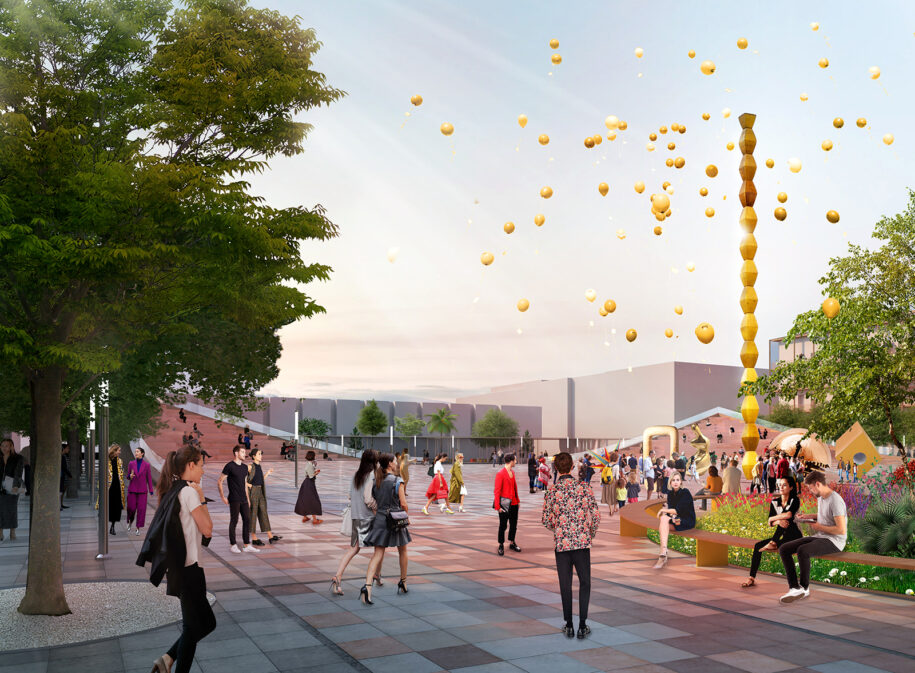 A TRANSFORMABLE SURFACE: Both a civic square and an interactive public space

The proposed design achieves maximum flexibility by freeing up the centre while providing critical infrastructure in order for the space to adapt to multiple events. A sustainable and transformable water feature at the centre of the square allows the space to become an interactive playground when it is on. Otherwise, once the fountain is drained away, the square transforms into an unobstructed civic space that can host large capacity events. 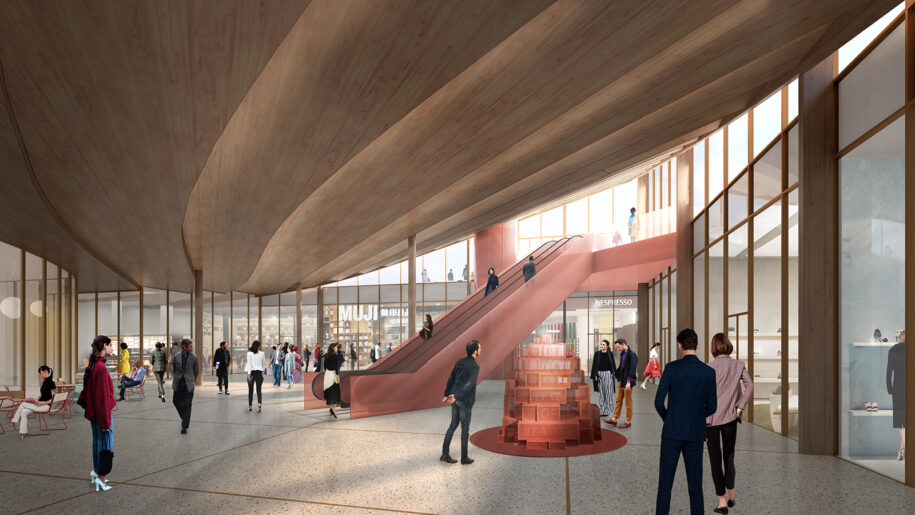 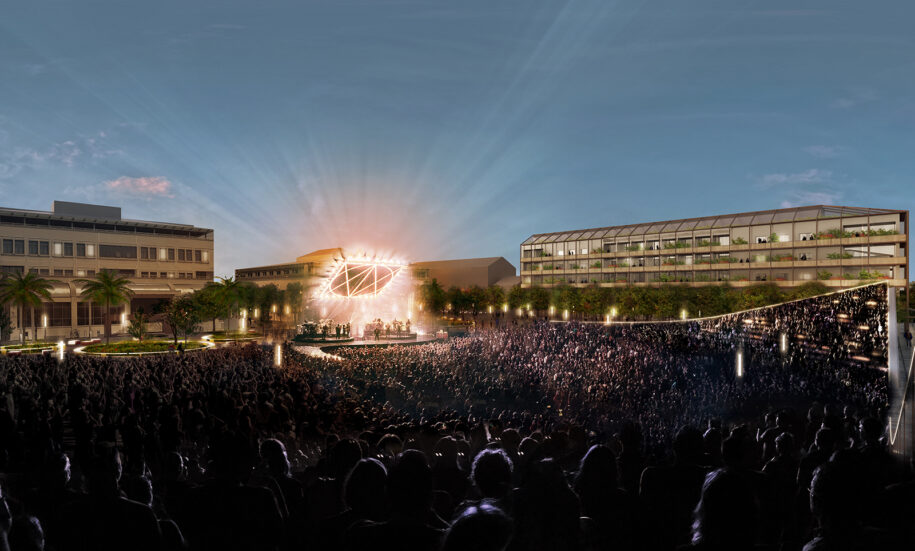 The urban equipment is designed to align with the idea of flexibility by offering a variety of seating configurations and elements for accessibility and comfort.

The proposal prioritizes natural and recycled materials like timber and concrete. Below grade the structural elements are concrete-based while above grade the project maximizes the use of timber. Permeable pavers throughout the plaza ensure a sustainable approach in terms of water management and green infrastructure on site. The color differentiation of the pavers enhances accessibility as it helps define zones of circulation as opposed to zones of pause and seating while maintaining the warm color palette of the existing plaza design. 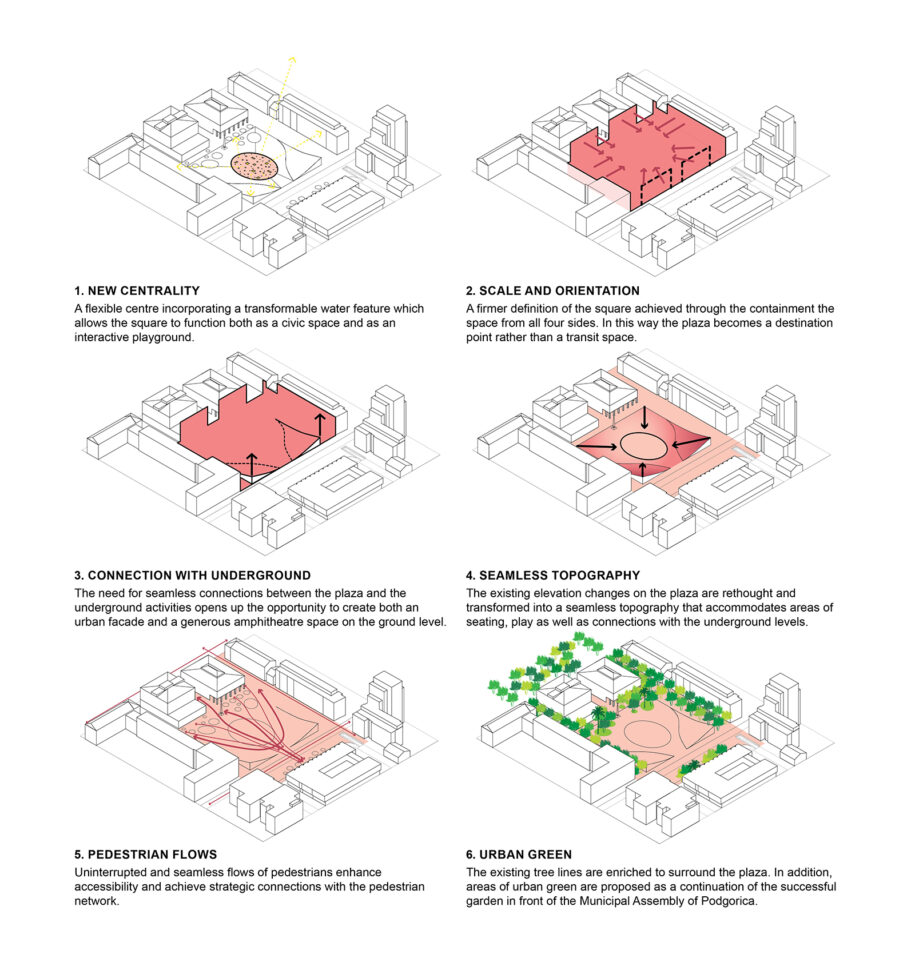 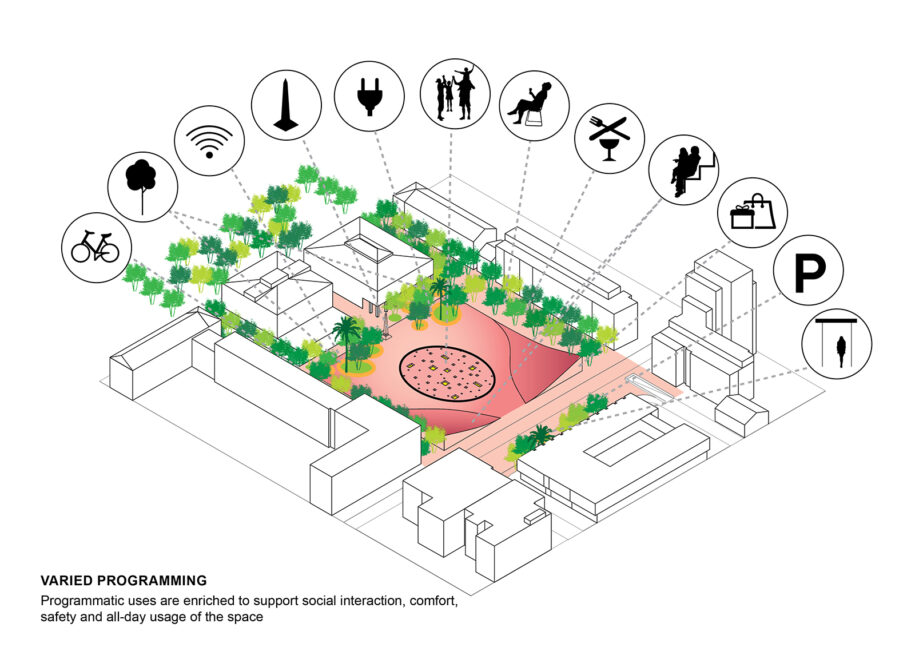 AN URBAN CONDENSER: Program densification above and below grade

The design proposes to densify the programmatic uses on site by introducing revenue generating uses below grade. More specifically the proposal looks at creating food-related retail space as well as a parking garage below the plaza, uses which will relieve the central part of the city from car traffic and will contribute to economic development. 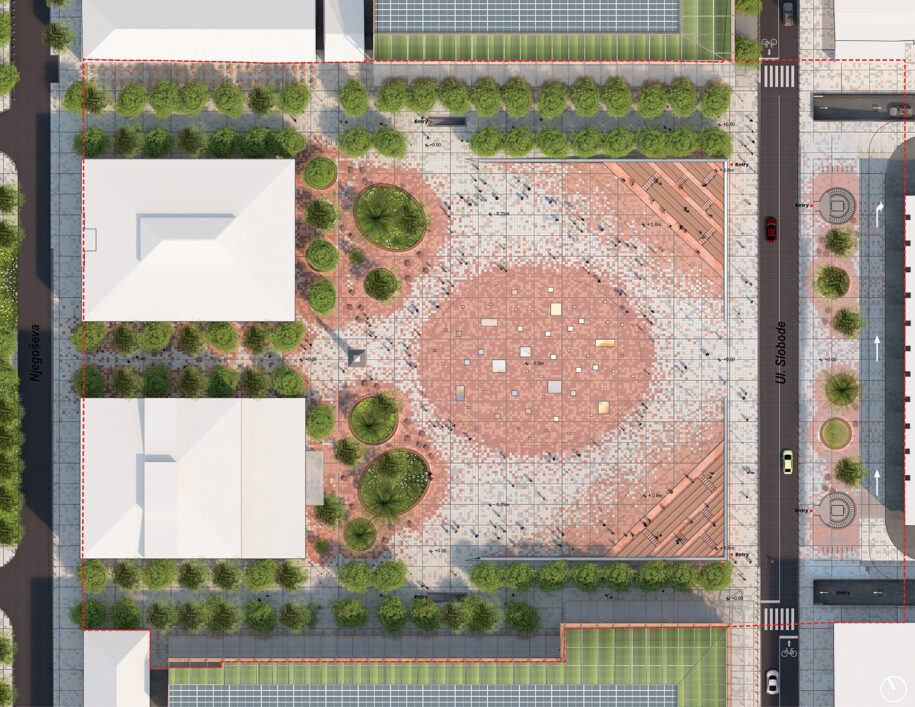 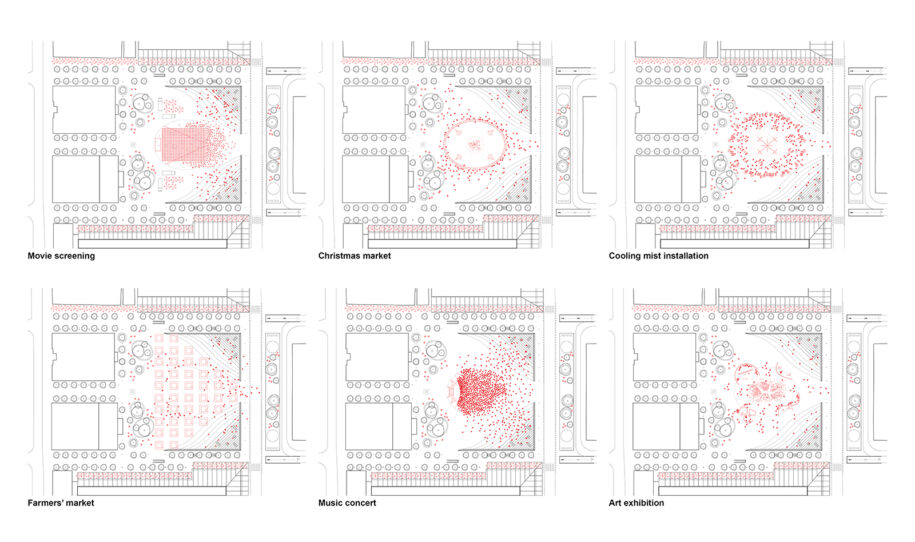 With regards to structure, the subgrade parking levels consist of a concrete retaining wall and raft slab structure, supported on either deep foundations, or thickened raft slab foundations in areas locations of high loads. The parking decks and plaza level consist of cast-in-place concrete flat slabs, supported on rectangular columns. This strategy reduces the need for complex formwork and increases clearance heights by eliminating the need for concrete beams. 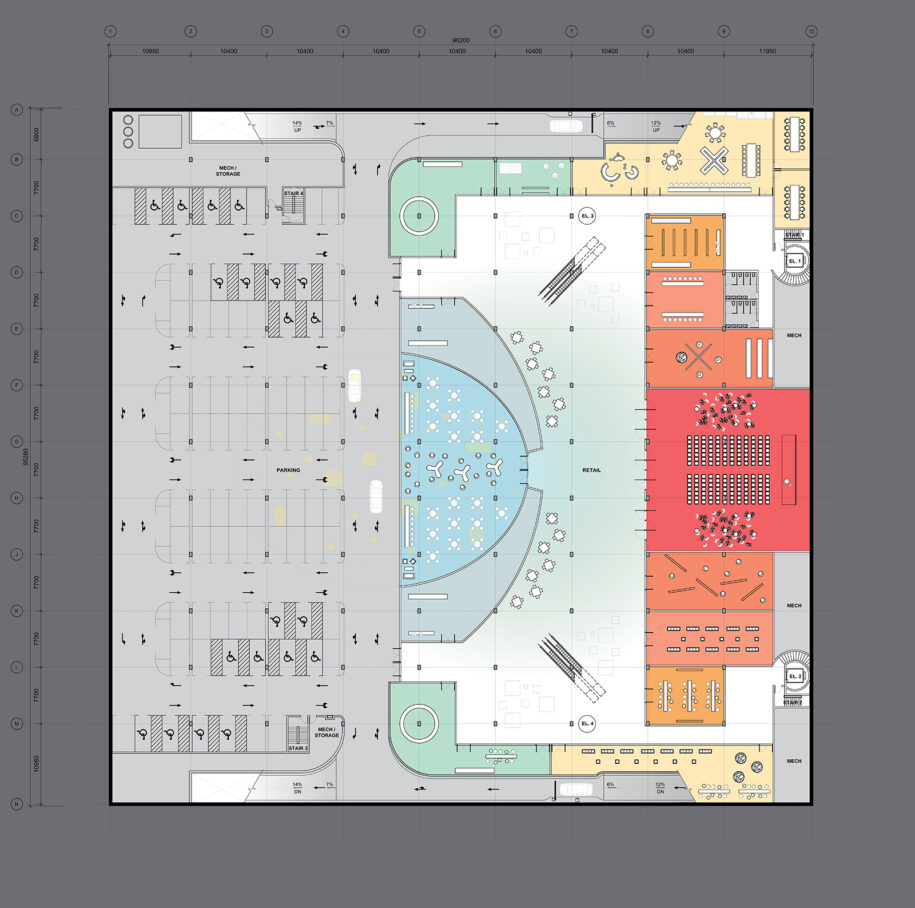 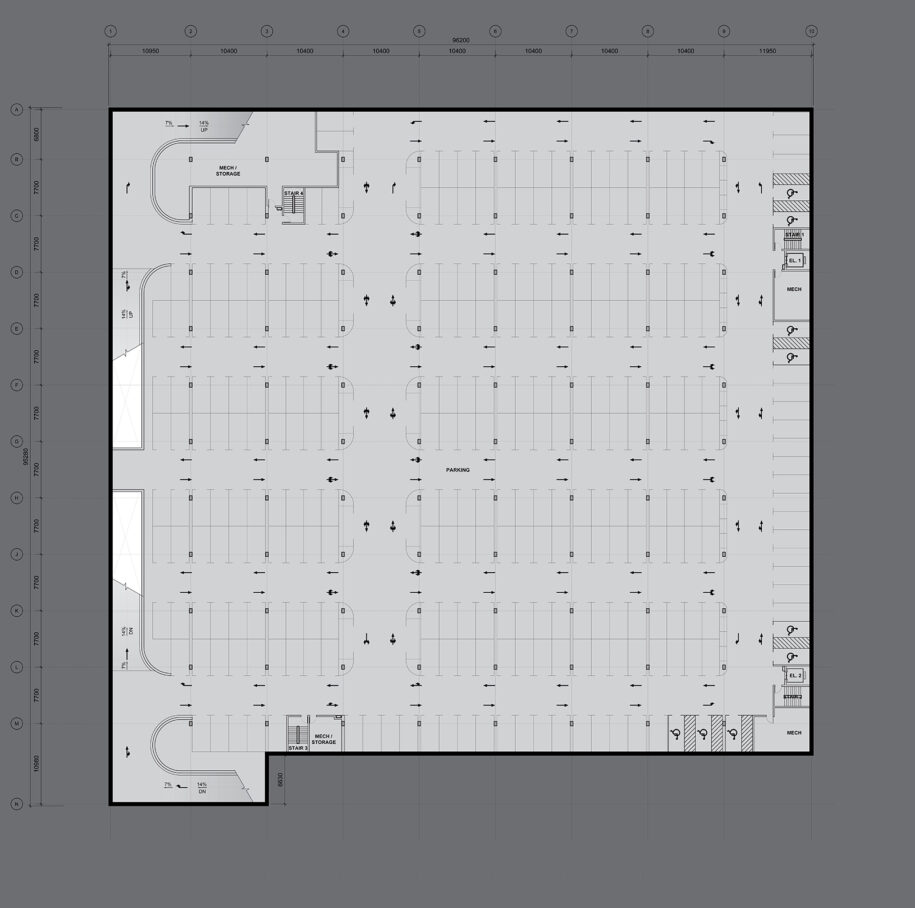 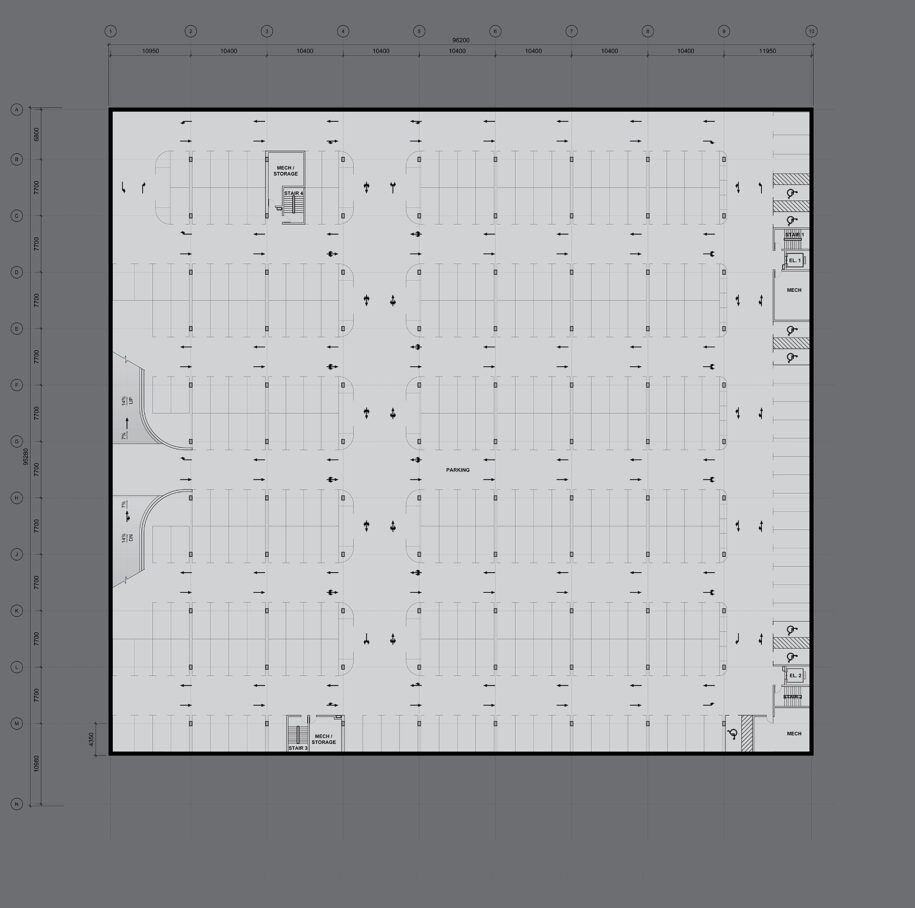 The above-grade structural system consists of a stepped, engineered mass timber system, forming the entrance canopies at the Eastern end of the square. The triangular sloped canopies are framed at either edge by shaped glulam beams, supported by rectangular glulam columns. Overlapping CLT planks step up together with the sloped glulam edge beams, supported on either end by the edge beam. The overlapping CLT planks are tied together by threaded steel rods, and step down to meet the concrete slab at the plaza level, which supports the lowest CLT plank along its long edge. At the plaza level, the penetrations in the concrete slab at the fountain are capped with laminated structural glass.

A TRAFFIC RELIEF: Streets to the people and cars underground

The proposal keeps Slobode Street in regulated mode by raising immersion bollards at the beginning and at the end of the site. On the surface of the square, pedestrian and bicycle traffic is planned with an open space for bicycle parking, and immersion bollards enable access to the square in exceptional situations and for deliveries. A three-level underground parking garage sits below the square, with the entrance from Novaka Miloševa Street and the exit to Miljana Vukova Street, which remain in one-way traffic regime. A one-way street in front of the Beko department store will connect Novaka Miloševa Street with Miljana Vukova Street and serve as communication for all the drivers that don’t want to use the underground parking garage. The underground parking garage has a total of 737 parking spaces, 36 of which are reserved for persons with disabilities, and 30 for motorcyclists.

The proposal takes advantage of Podgorica’s mild weather and comfortable climate to plan for the use of Independence Square year-round. Through permeable paving systems and green infrastructure techniques, rainwater is captured and reused to irrigate the planting beds on site, as well as for play and recreation through the interactive water feature. As Podgorica’s precipitation does not vary significantly month to month, the system is designed in a capacity to be utilized during all seasons. 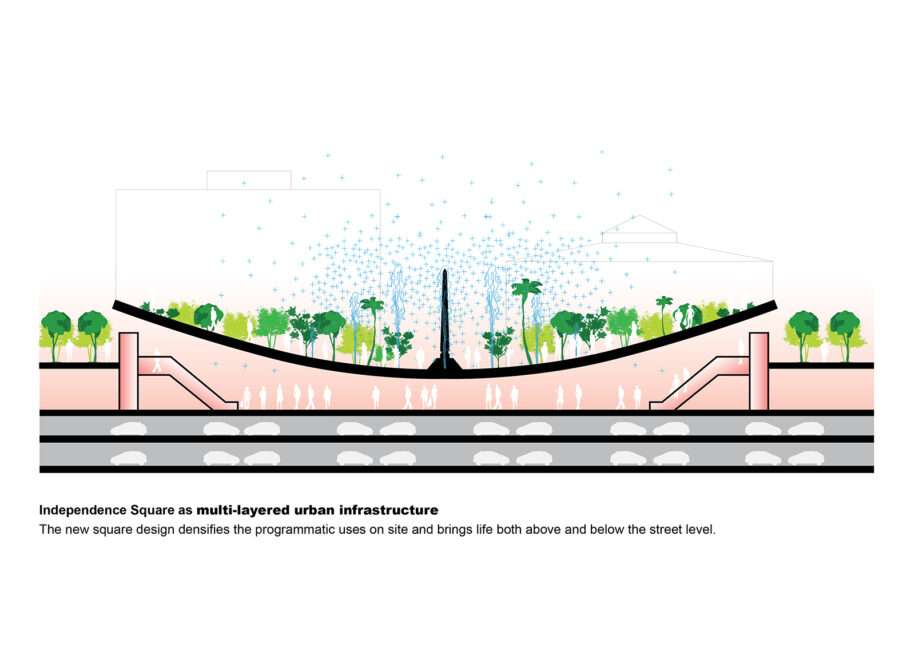 Based on the annual radiation analysis, the plaza receives well distributed radiation throughout the year. For buildings surrounding the plaza, a green facade system supported by a light timber structure is introduced that will extend the balcony space, visually unify the façade, and enhance the living conditions for the users. Reaching the top of the buildings, the green facade system will turn into an inclined roof system creating a micro-climate for urban agriculture on the roof. Since there are no obstructions and the roofs are flat, PV panels will be installed to help generate energy for the plaza and parking below, reducing the burden on the energy grid and helping further optimize the environmental performance of the Square.