High up in the Tramuntana Mountains of Mallorca with views overlooking the Mediterranean Sea mar plus ask architecture practice has built two small off-grid houses which blend as seamlessly and sensitive as possible into the outstanding natural setting consisting of thousand year old olive trees functioning as silent refuges for architects, artists and writers around the year. 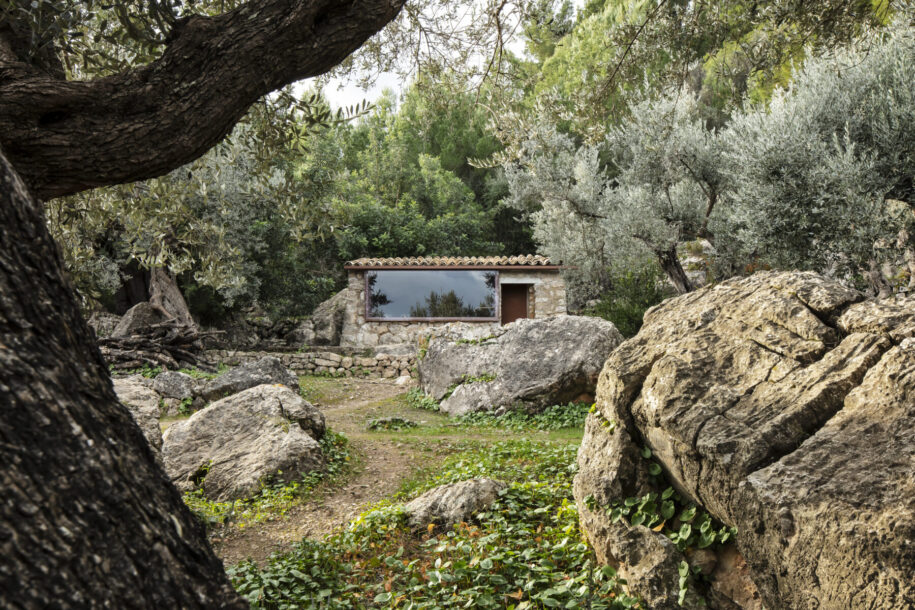 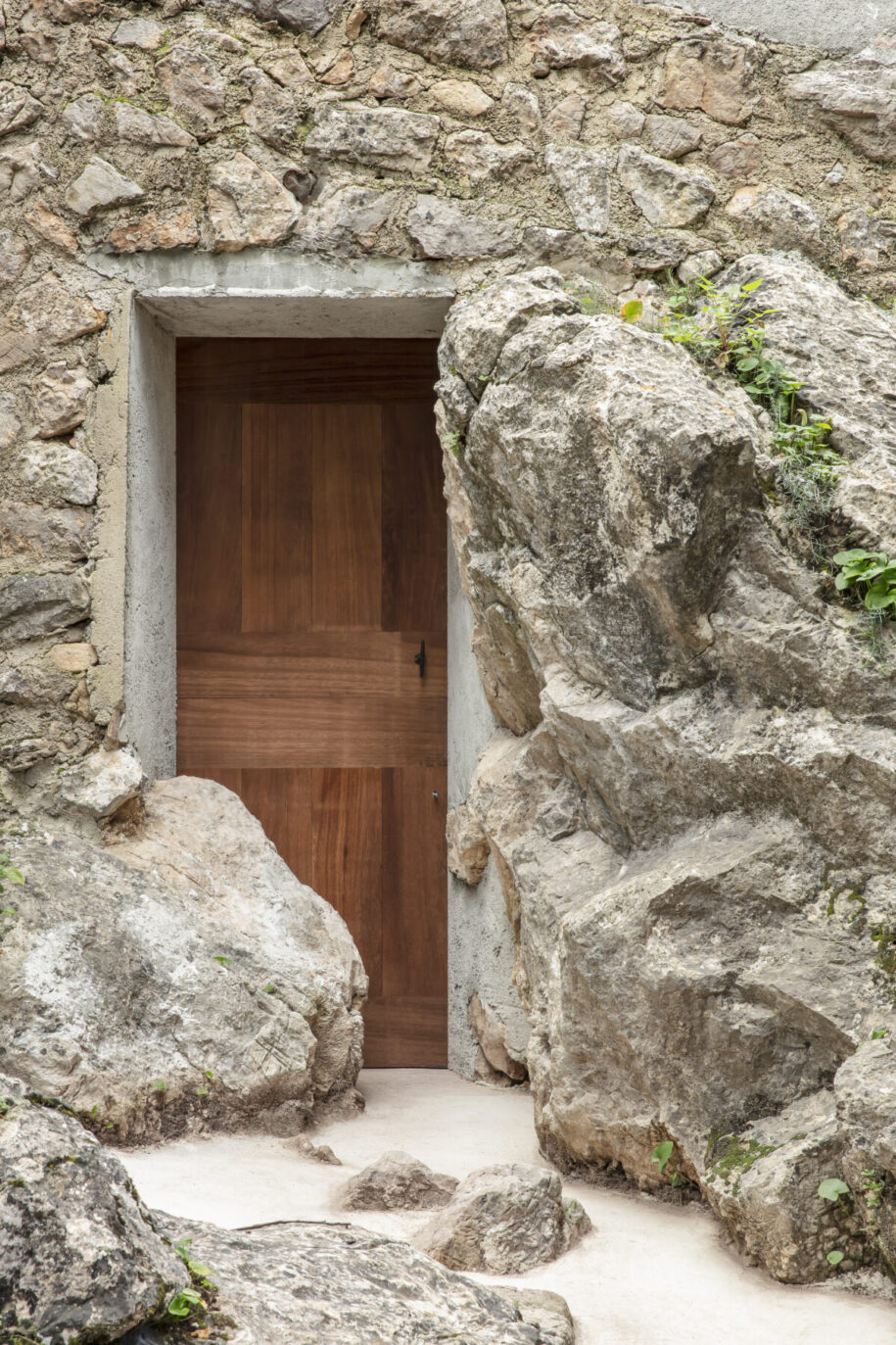 The houses are surrounded in all directions by thousand year old olive trees standing on man-made terraces of dry stacked stone, where only the wind and the bells of the grassing sheep can be heard. The incredible scenic mountain area is one of the most beautiful examples we have on earth of how well wild and human-made nature can intertwine seamlessly, a rare example where Man has given more beauty – than he has taken away from nature – which brought it into the Unesco World Heritage list. 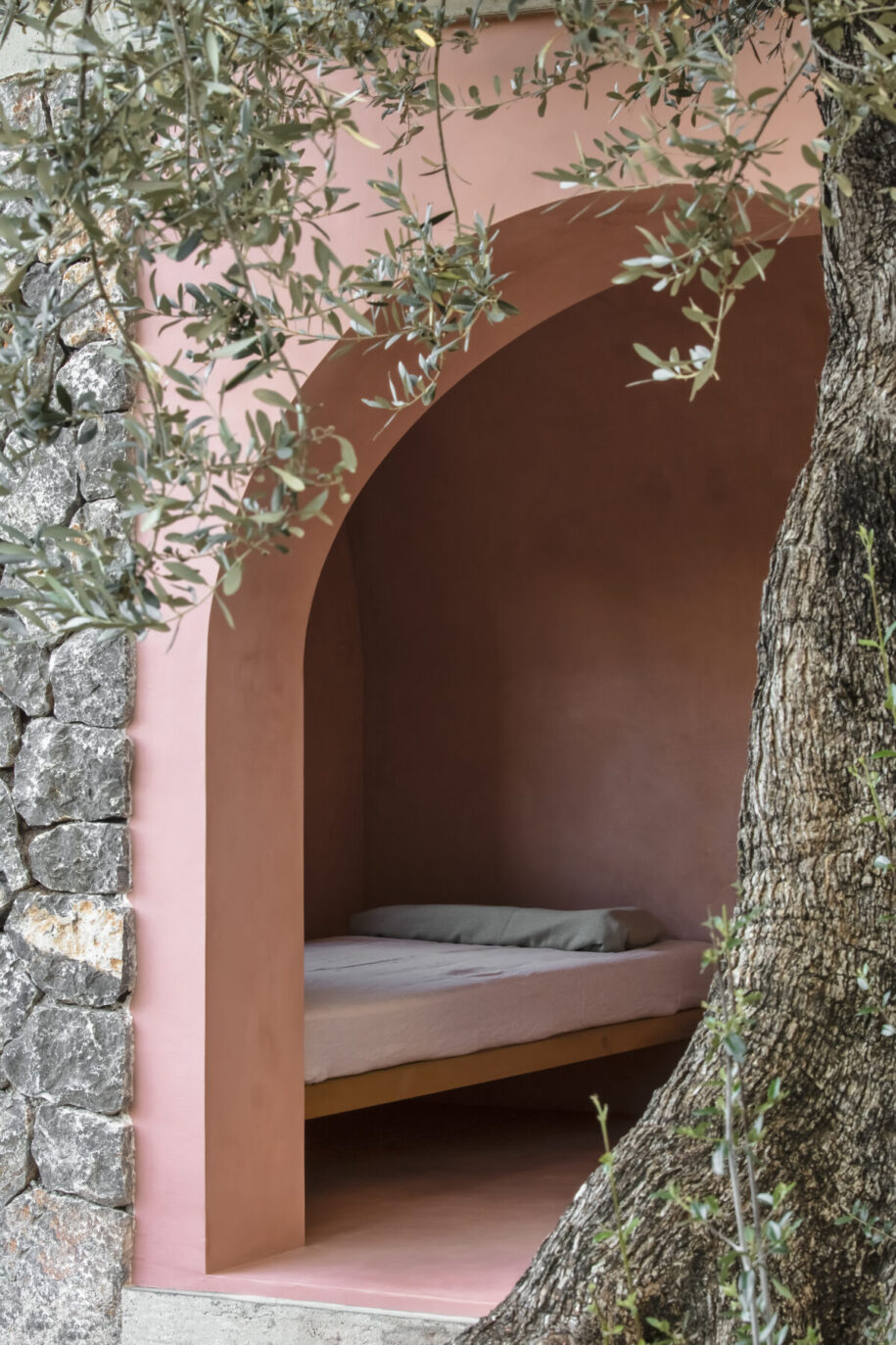 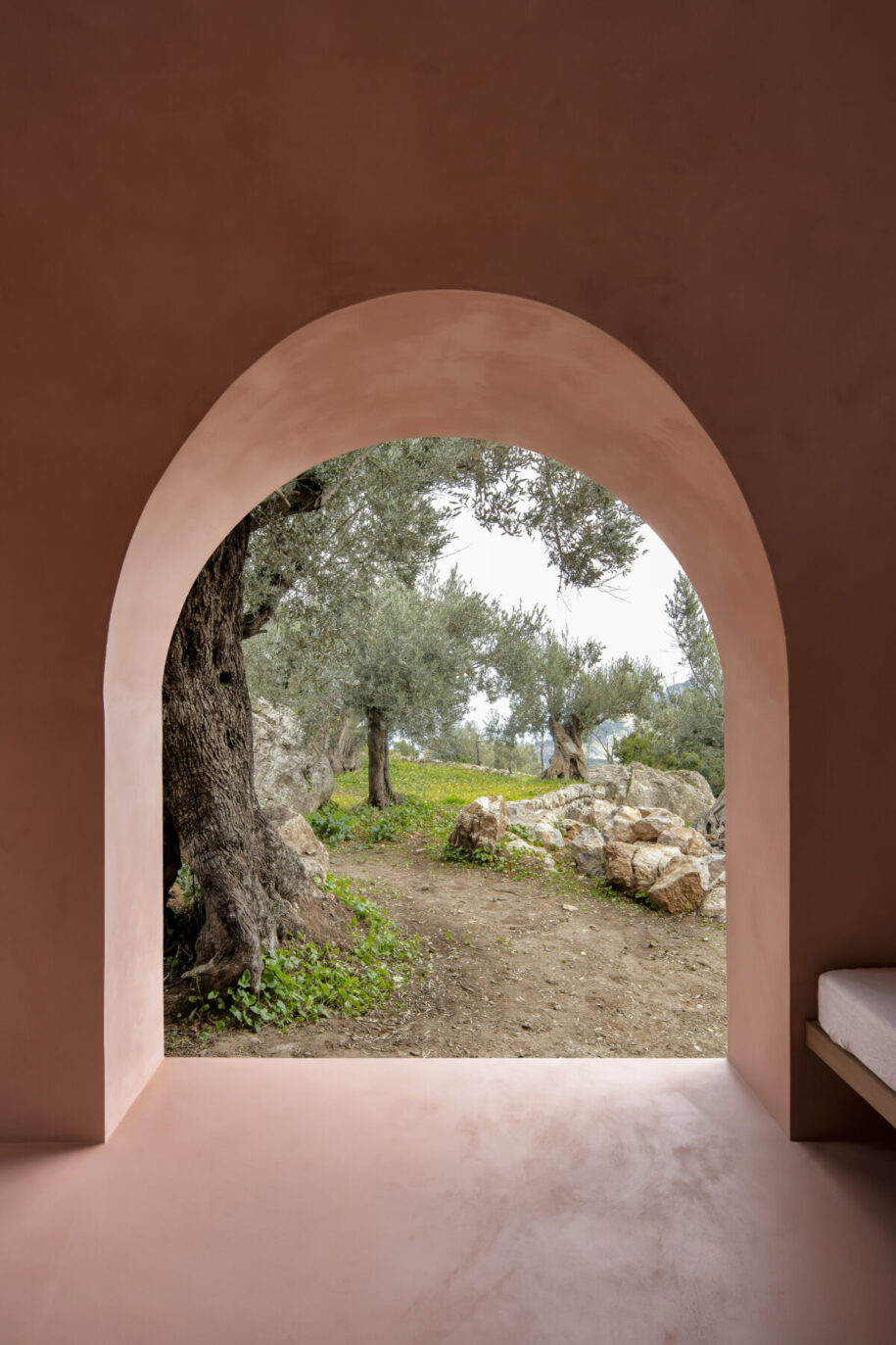 The houses blends into its surroundings as seamlessly and sensitive as possible into this magical setting by first breaking the needed footprint into two, while also reusing an old stone structure for the The Purple House a house for cooking and dinning, covered in a specific shade of purple stucco; the complimentary color to the dark side of the olive leaf. The reusing of the existing structure meant that only one new structure was needed which was even build into the existing terraces making the structure practically invisible being half underground, which keeps the house cool in the summer and warmer in winter. 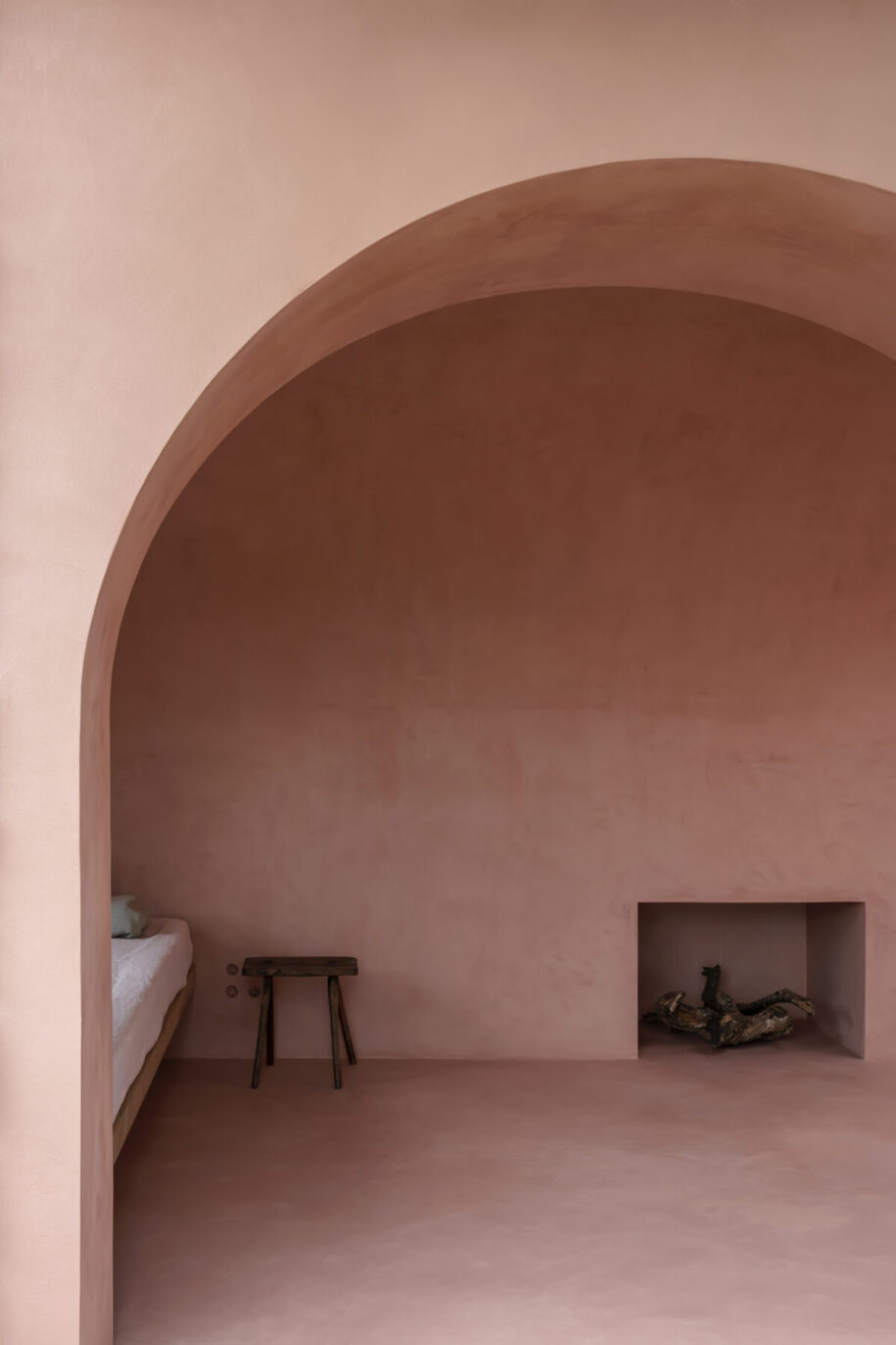 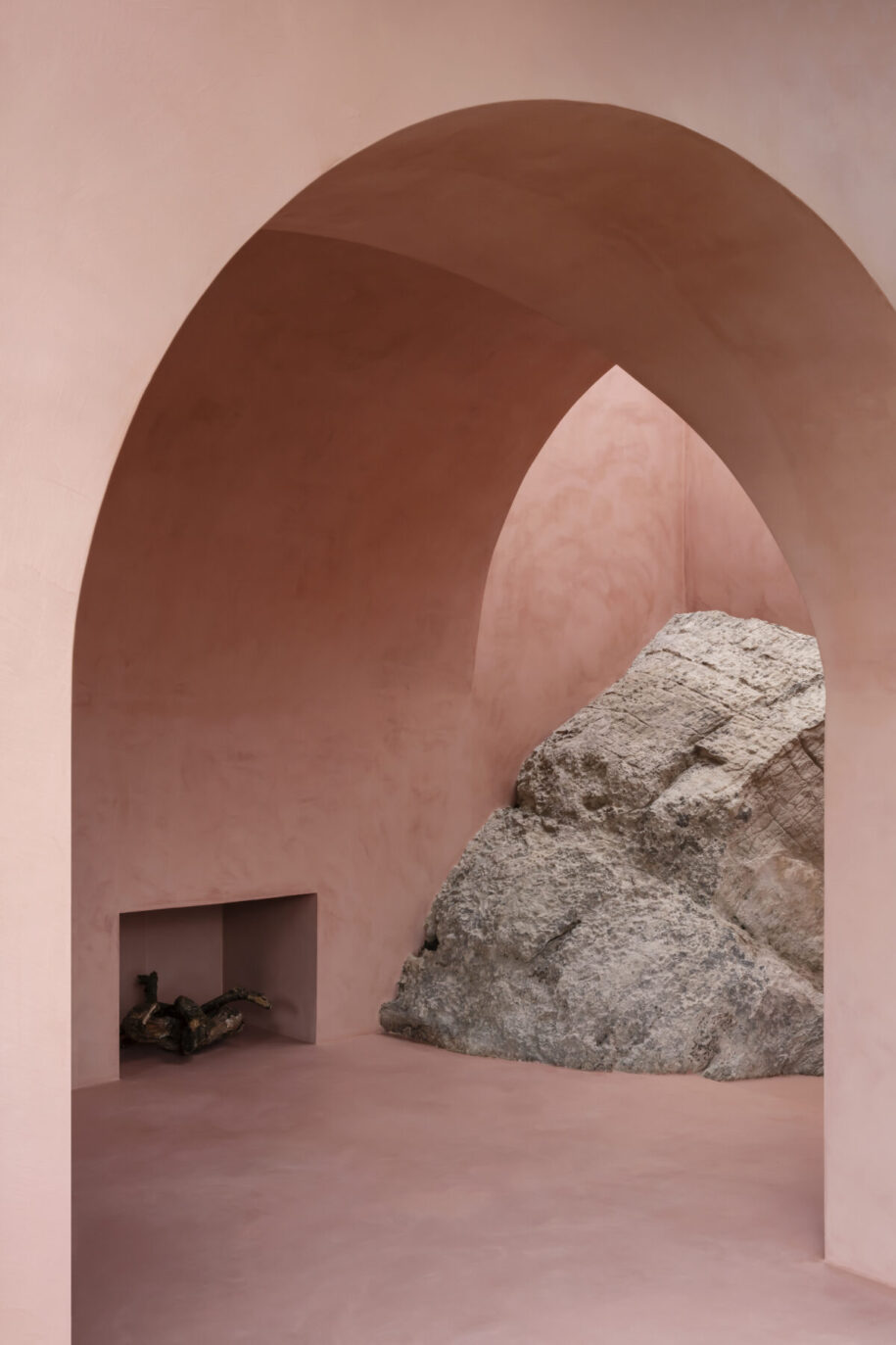 In one end of the new structure a vaulted ceiling dissolves seamlessly into a huge skylight under which a hidden shower is found next to an existing rock formation, which the house has embraced. Water for the shower is provided from a natural spring behind the house. A specific shade of pink, the complimentary shade of the matte lighter side of an olive leaf, was chosen to cover both walls, floors and ceilings, reminiscent of mans first home, the cave. 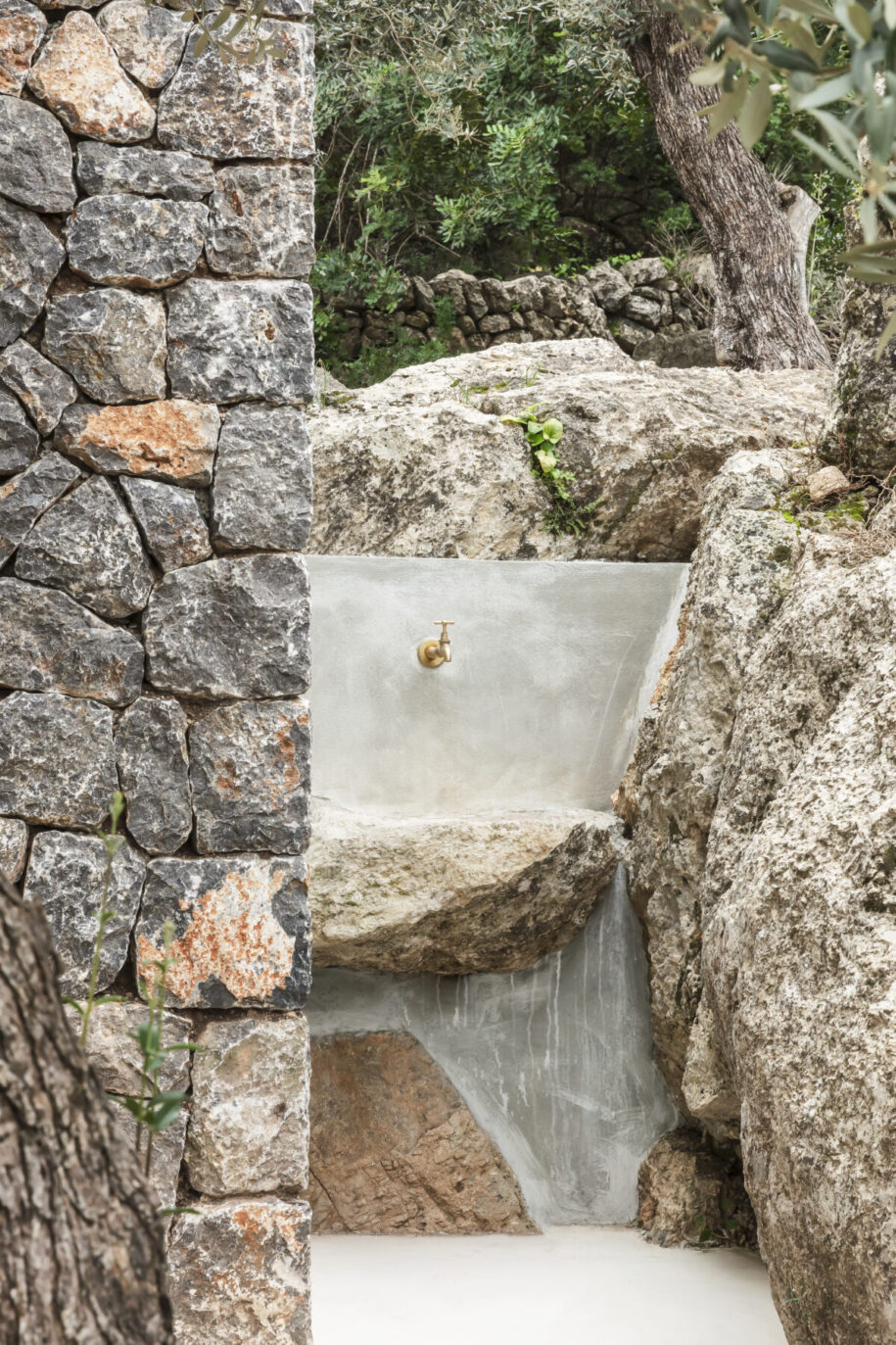 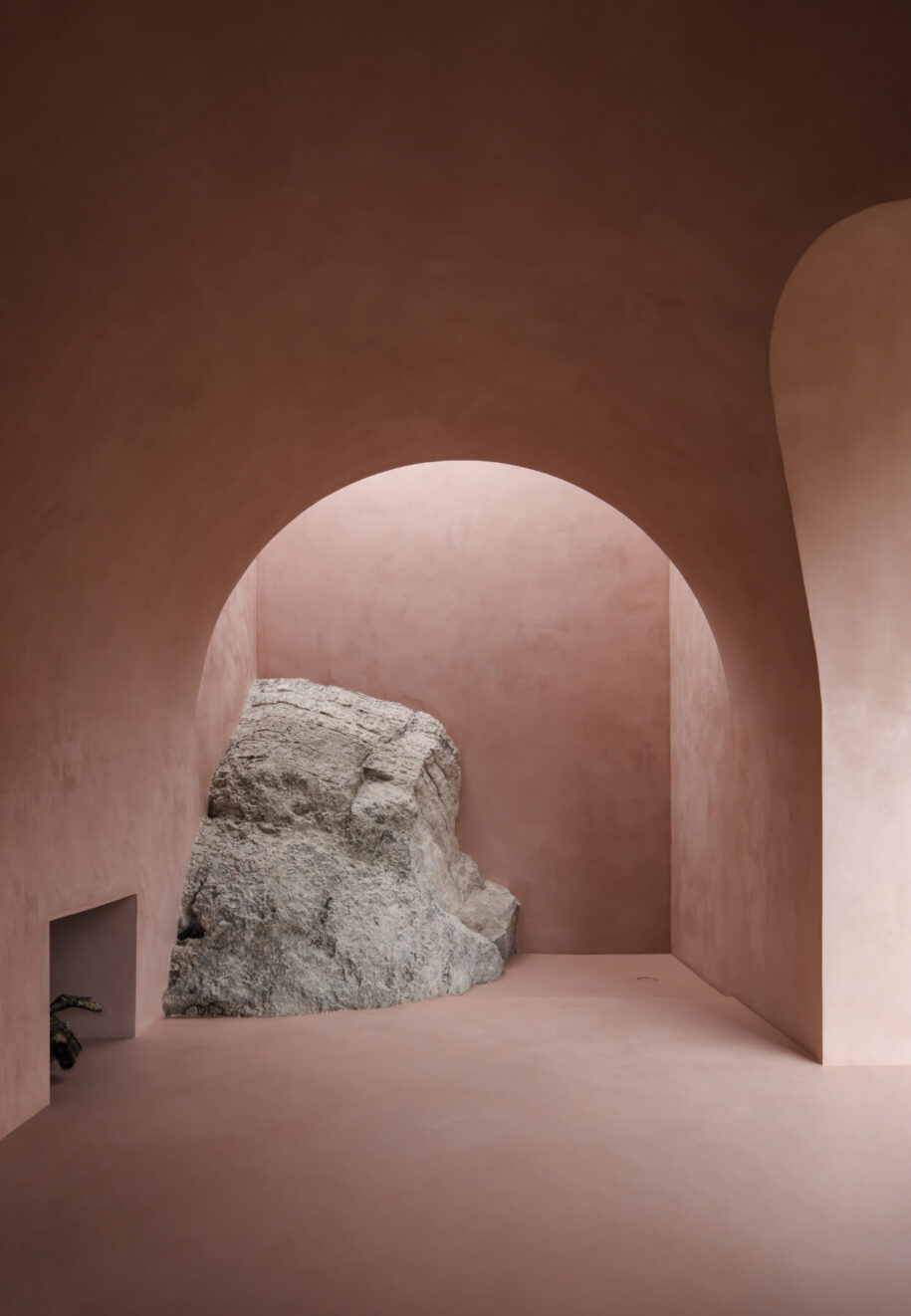 The complementary colors of the olive trees provides an optic effect when looking into the landscape which becomes vivid, more defined and crisp. 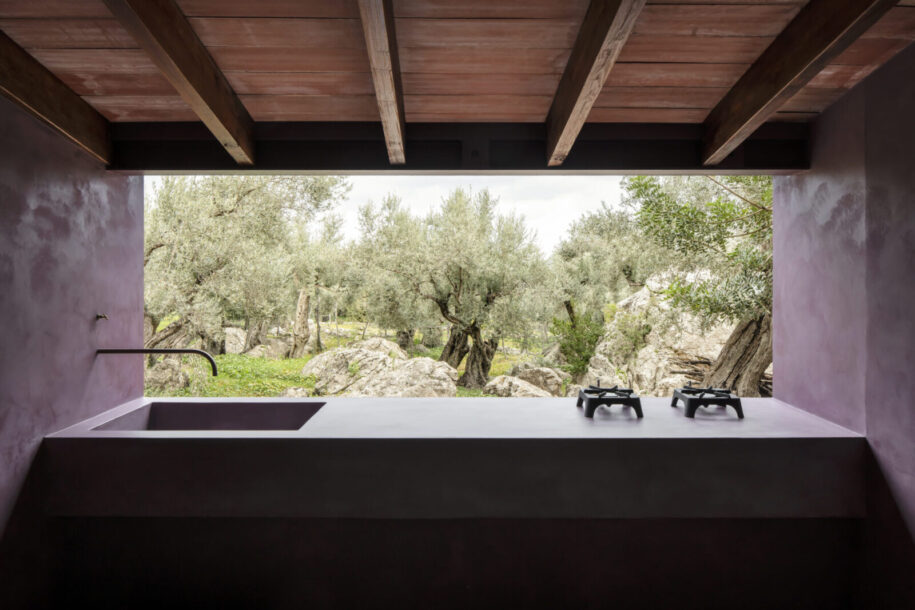 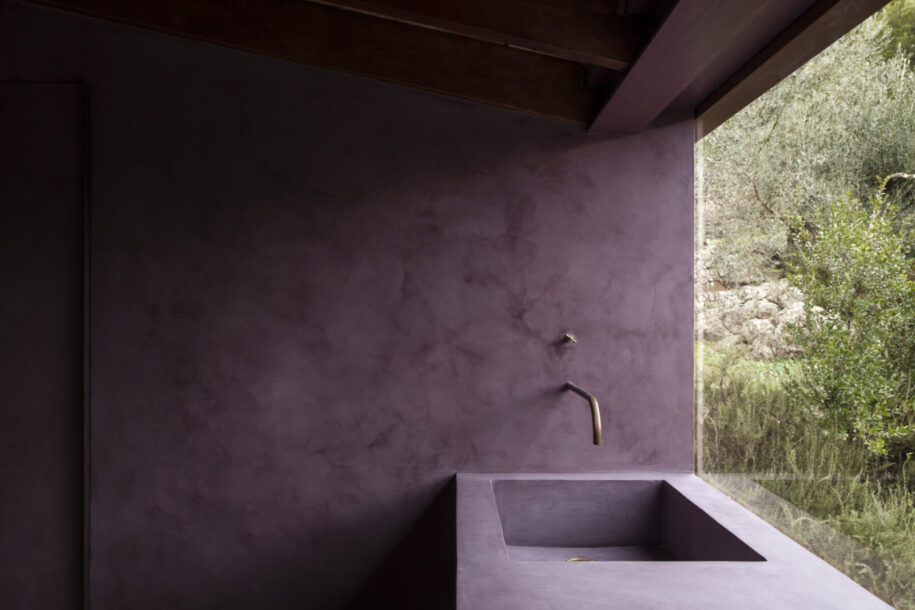 The two houses contains only the most necessary; a bed, a shower and a fireplace, while The Purple House is equipped with a bathroom, two gas burners, sink, wood fired oven, table and stools and a fridge powered by solar panels behind the house. 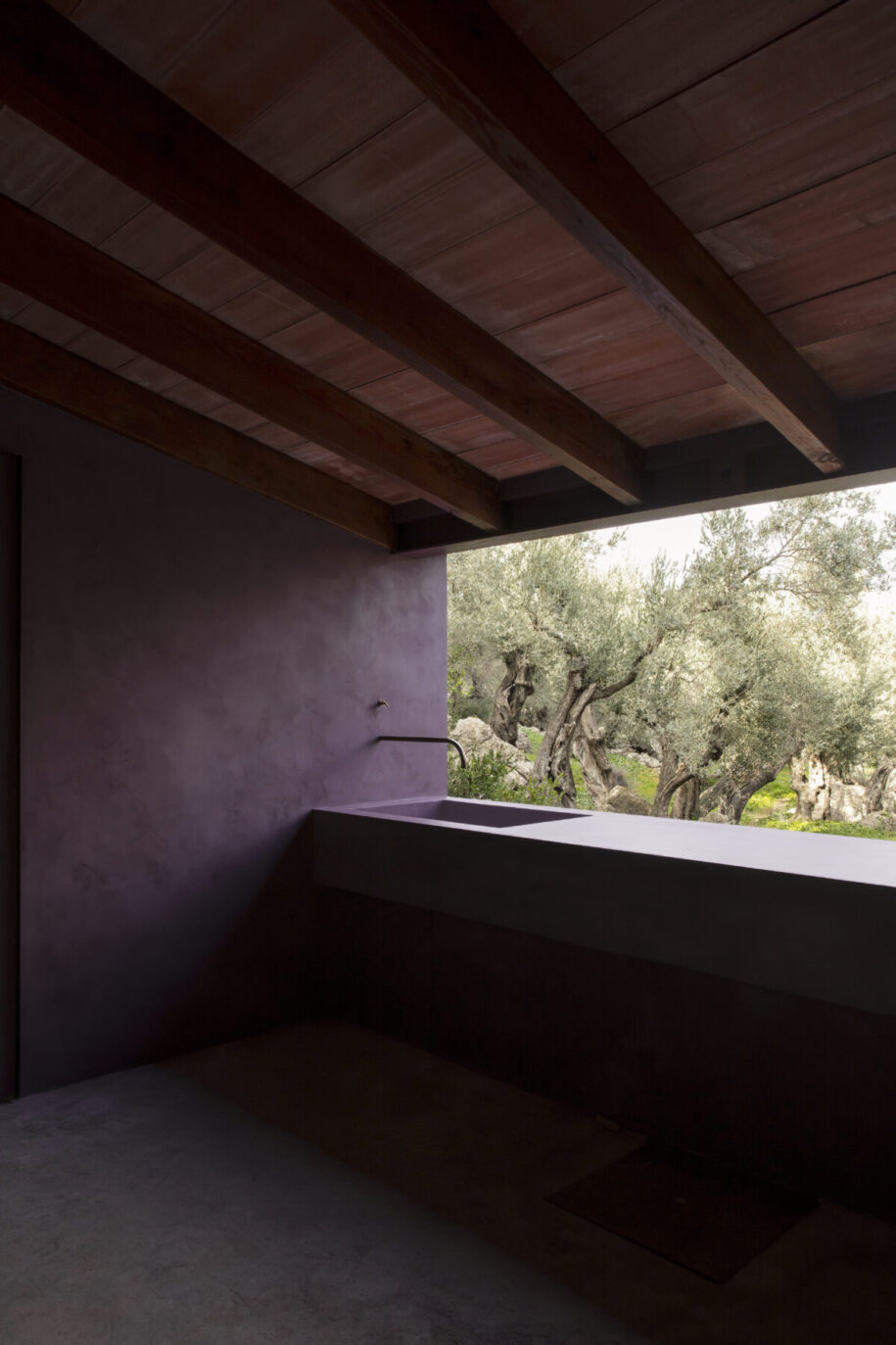 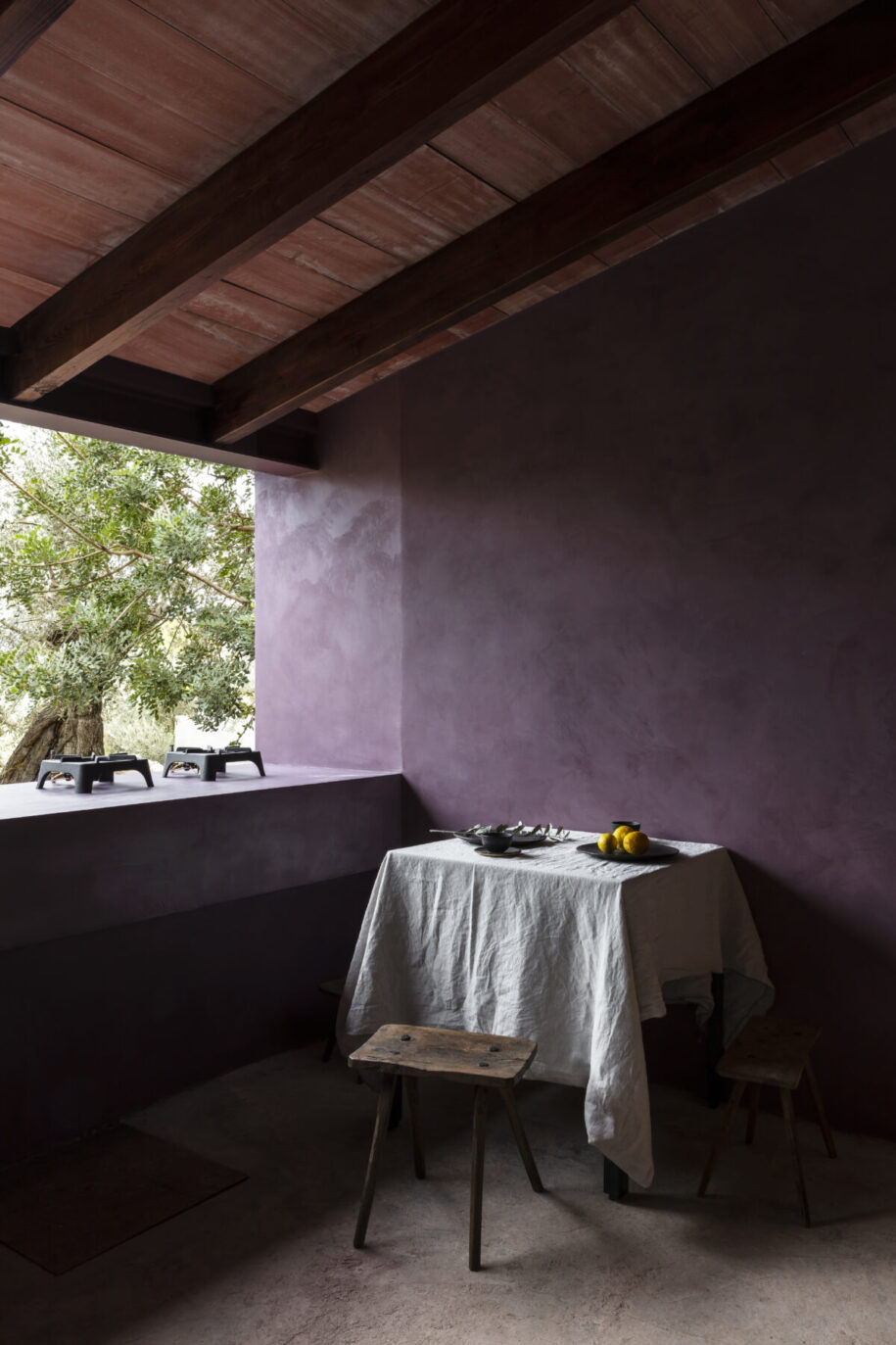 The Olive Houses are owned by mar plus ask and are offered as a silent refuge for other architects, artists and writers around the year. 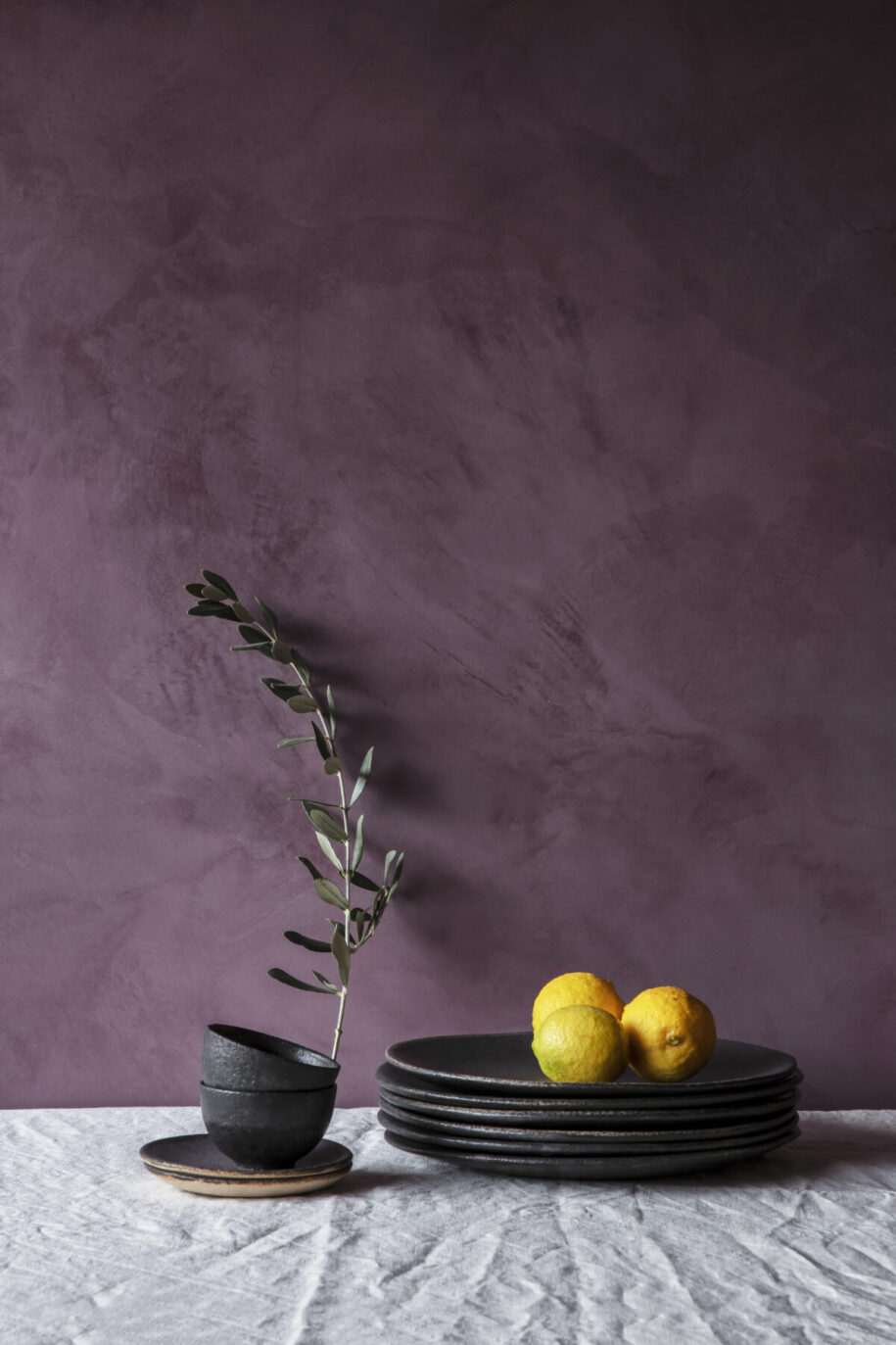 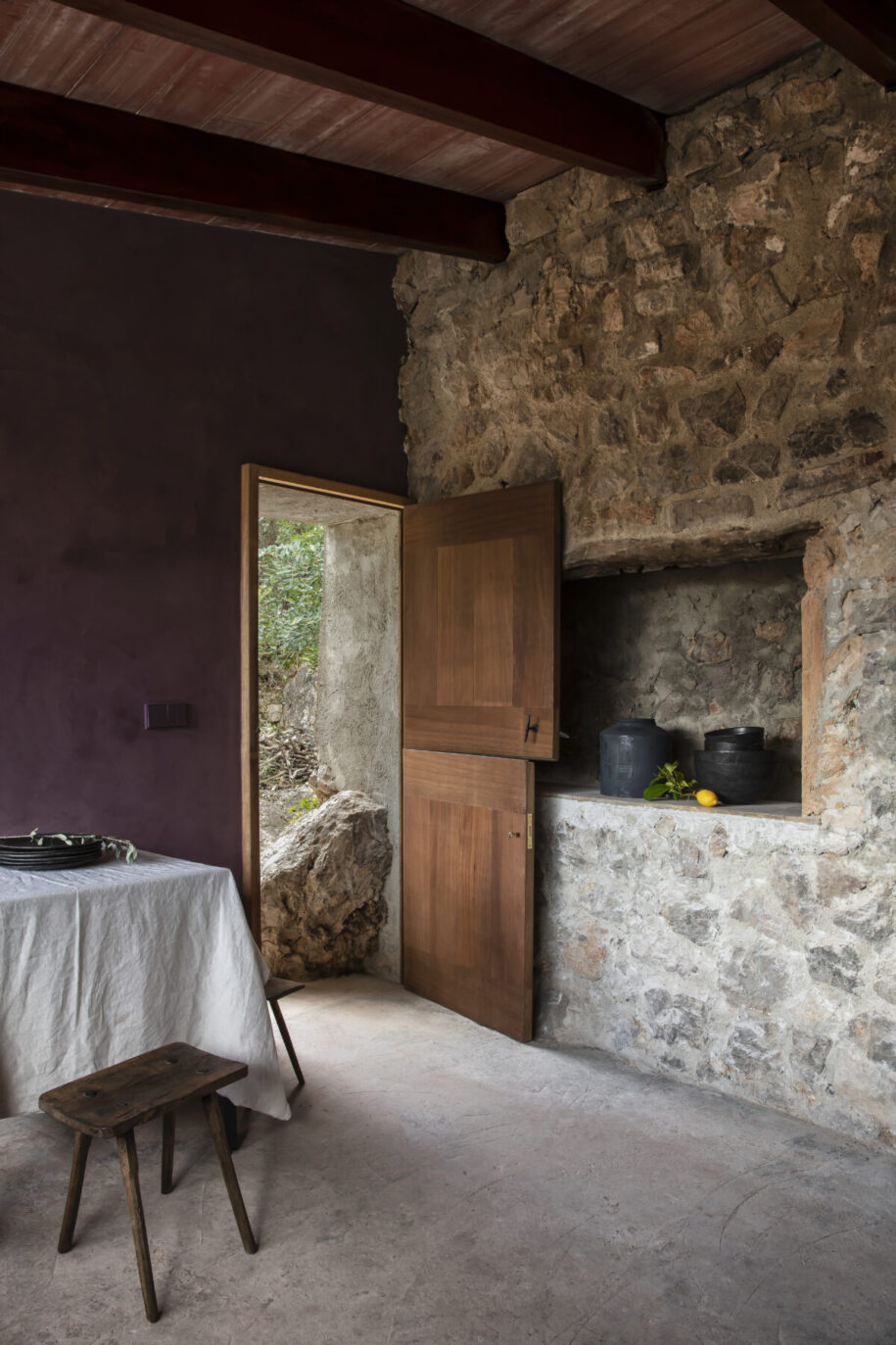 About mar plus ask

Established in 2015 by the architects Mar Vicens Fuster (ES) and Ask Anker Aistrup (DK). Mar plus ask is an internationally positioned yet locally engaged office with works within furniture design, residential architecture and retail spaces. The couple has received numerous awards and scholarships and are widely internationally published. 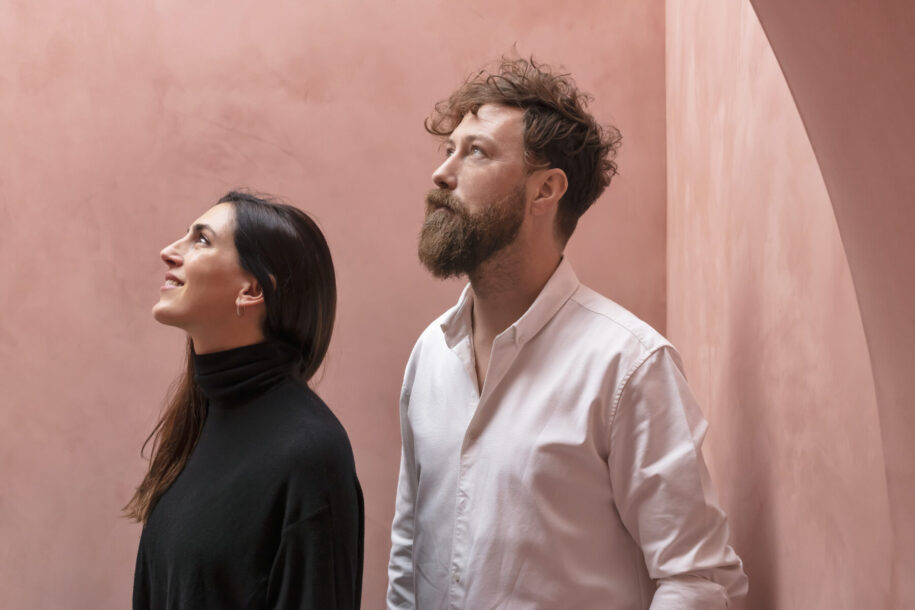 “We are dedicated to the making of meaningful objects and spaces, both simple and thoughtful. In dialogue with existing conditions, whether natural or built, we see constraints as a starting point for our design, rather than hindrance. We like spaces that are intimate with measured openings to the souroundings, that sculpt the natural light into our spaces, with shades and shadows that changes throughout the day, through the use of emotive and sensorial qualities of natural materials.” 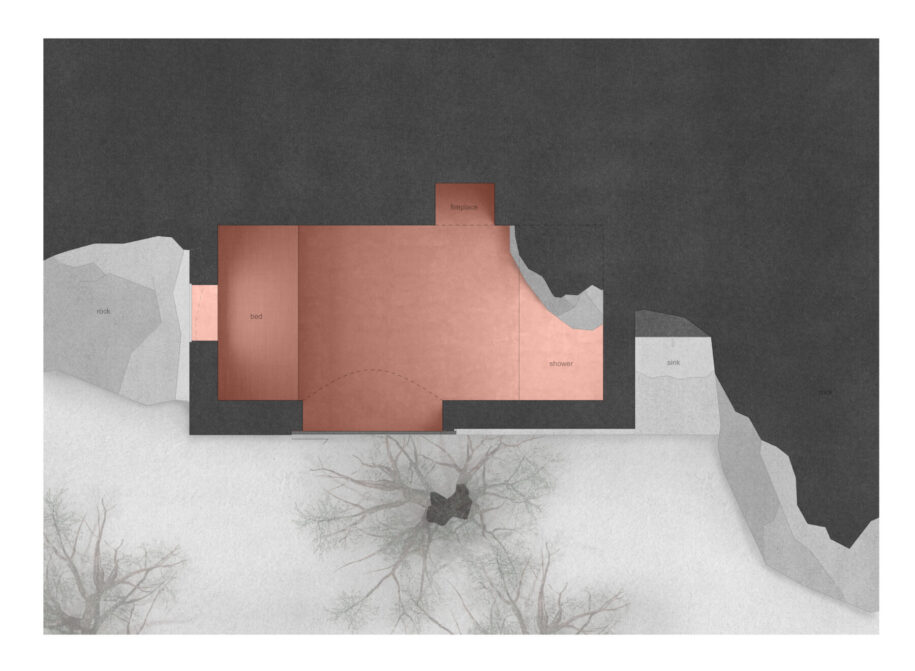 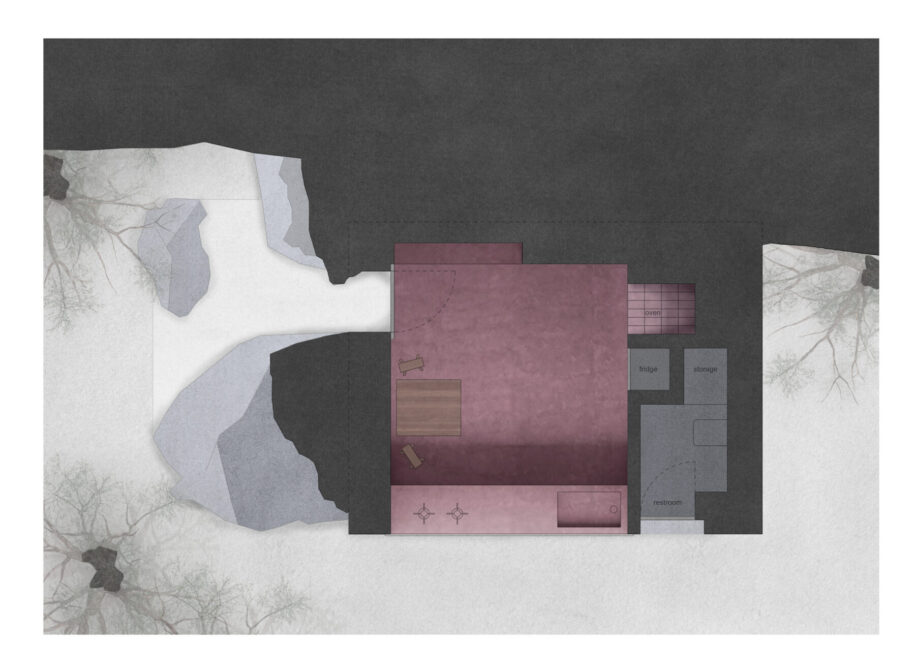