I AGREE
Archisearch https://www.archisearch.gr/wp-content/uploads/old-site/final-dubrovnik-image1-final.jpg
>01 / Linked – In. The site lies in between: In between the walled city and the evolving outer urban area. It could essentially become a link of the two. As a public, open, intermediate space with a distinct but discreet character, capable of accentuating the existing urban qualities: enclosure and openness. The density of the inner city, sharply defined by the curvilinear walls is in contrast with the looser growth of the exterior one. The site lies at the northern limit of the walled city. Its hollow exterior curve is dominant and the requested public hub embraces and reveals it. The massive, continuous stone curve is what generates the new, also essentially curvilinear scheme that is inserted in between: an urban green pebble.

>02 / Medieval Modernism. The inner city’s fabric is woven through streets on the north-south axis. This general structural tendency is preserved, running through the new urban scheme, the moat and the streets. Their axis is extended through the public space, carving the urban pebble, generating its inner life. The connectivity achieved through this natural extension goes beyond its functional merit. Running through the whole project, these north-south threads become a natural design tool through which the new, behind-the-walls center is sculpted, bended, excised, opened. 11 consecutive terraces are formed, developing an amphitheatrical succession of open and closed spaces, escalating from west to east.

>03 / Urban Landscape. The value of the new center lies in contrast. The intensive inner density and the massiveness of the fortifications may appear in their full vigor only through a bold but at the same time non-rivaling structure: Essentially a low, green, extensive, liquid urbanity. The requested development does not damage what is already present. In order to restore and strengthen the ambience of the walled northern curve of the historic city, the planned intervention is kept close to the ground. It becomes the ground itself: the contrast between the new smooth structure and the fortifications naturally fortifies the latter and restores the area’s identity as a whole. The roofs are all planted in order to form a terraced park that leads to the new central piazza.
>04 / Wall Piazza. The Northern Buza gate is now the least important of the three that are still active. It is indeed a small gate. But its positioning in the fortifications disposes of a unique trait: it lies in the center of a concave wall curve of 400 meters starting from the Minceta tower down to the Revelin Fort. This hollow curve, that connects the two towers makes the continuous stone view breathtaking. Buza gate could become equally important with Ploce and Pile but it has to be equally supported: by an effectively positioned piazza. The shape of the piazza is a triangle, excised from the proposed curvilinear scheme. Five of the terraces are bended so that the park reaches the piazza level naturally: Through another triangle; a great staircase in parts; a new theatre as well.
>05 / Open Theatre. Dubrovnik’s festive activities are multiple and reputed. The inner Stradun Piazza successfully hosts concerts, theatre and performances. The proposed new piazza is additionally enhanced by a latent open theatre. The divided triangular staircase that connects the terraces with the new public space can serve as an observation area or even be appropriately transformed into a seating area. The surfaces of the piazza as well as those of the theatre are stone-paved and become gradually greener as the triangular geometry gives way to the terraces. The street stripes that the historic city naturally generates become here sunlight incisions for a new closed space that is profitably juxtaposed to the great open one: A new Forum.

>06 / Green Forum. The commercial potential of the intervention relies on its high connectivity to the generated public area. The proposed Forum is a unified flexible space that directly refers to the new piazza. Its character could effectively fluctuate between an expo platform, a semi-open bazaar space, or a shopping mall. The bearing system of the roof is comprised of slender columns that support mezzanine and planted terraces as a rhythmical, metallic forest. Just below the triangle of the open theatre, an equally triangular piece of the piazza plane is essentially subtracted: the underground corpus of the project gets effectively revealed. It is the void through which the tourist terminal underneath is linked via the forum to the public realm of the new piazza.

>07 / Inconspicuous Terminal. A bus terminal is located exactly beneath the piazza. The moat street retains its position but gets covered so that motor and pedestrian traffic is separated. Consequently, maximum connection of the public space with the moat and Buza gate is achieved. Through the great triangular hole of its roof, escalators connect it to the level of the piazza. The development of the project below ground is as significant as the one above ground. The two are essentially interconnected: In order for the site to be liberated from the usual exploitation that would opt for the maximum permitted height above ground, it contrarily has to develop downwards. Apart from the terminal the two garages also follow this apparent design imperative.

>08 / Double Garage. The simple curvilinear scheme of the proposal proves its merits particularly in the organization of the parking spaces: an equally curvilinear peripheral motor movement is complemented by transversal secondary lanes that follow the north-south axis of the city streets. Both the peripheral and the transversal parking lanes are two-way. The parking space for the inhabitants of the inner city occupies two full levels and the parking space for the new facilities occupies the levels above. The garage’s bearing system follows a grid of columns that allows at the same time the proper, partially cantilevered support of the 11 planted terraces and their fluid content.

>09 / Liquid Facilities. Westward, the first four zones are occupied by the offices. The office zones are escalating towards the east, following the amphitheatrical propensity. The pedestrian lanes in between them are offering direct contact of the working spaces to the planted terraces as well as views of the fortifications. The flexibility of their design permits a future possible mingle with commercial uses. T­he last zone towards the piazza is occupied by a small boutique hotel whose entrance is at the level of the piazza. Next to it a necessary recreational mix of a bar, a restaurant and a café support the new piazza as well as the adjacent Forum.

>10 / Lateral Housing. The residential area is formed by three buildings that attempt to adapt to the existing urban fabric of houses by their simple geometry and proportions. The three volumes create the eastern limit of the proposal: two rectilinear and one necessarily triangular, following the new transversal road. The surrounding area that includes the open space of the preserved building is designed as a whole and is green: The proposed tree planting aims at condensing the existing vegetation of the moat. This mixed green-stone facade functions as a complementary vertical surface where the escalating horizontality of the terraced park is projected. The city walls remain nevertheless the main contrasting verticality.

>11 / Urban Pebble. Poet Lord Byron referred to Dubrovnik as the Pearl of the Adriatic. At the time, he approached it from the Sea. The experience that the walled city, perched on a rock of the Dalmatian Coast offers, is impressive: the verticality of the rocks is furthermore accentuated by the convex stone fortifications. Lord Byron was on board for his Grand Tour through the sea in 1811. Europan 11 called for the creation of a new approach to Dubrovnik: a land approach. A smooth urban green pebble, naturally corroded in 11 zones, in between the walled city and the verdant mountains, reveals to the visitor approaching from the North an astonishing setting: not just the fortifications and the urban jewel that they include, but mainly what embraces it all. The Adriatic Sea. 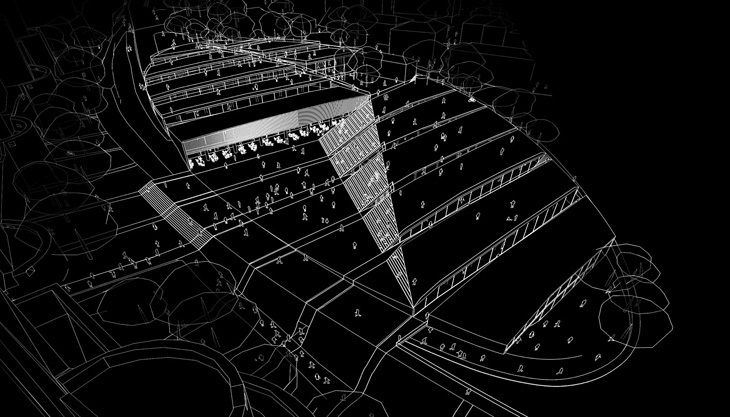