Ricardo Flores and Eva Prats / Flores & Prats Architects turned an old Building of the Pau i Justicia cooperative into the new Sala Beckett in Barcelona. The project is in open dialogue with history, reflecting the dense memories profoundly rooted in the culture of the historical industrial district.

The design of the new Sala Beckett -opened in 2016-  by architects Ricardo Flores and Eva Prats reflects the dense memories profoundly rooted in the culture of the historical industrial district, which had already undergone significant changes for the 1992 Olympics and has now become vibrant due to the presence of numerous artists and creative talents.

Having grown for 25 years through the commitment of the director José Sanchis Sinisterra, Sala Beckett has been a central place in the culture of Barcelona for some time. The institution runs now in its new location by Toni Casares, together with whom the architects Flores & Prats, winners of the competition announced in 2011, have worked for a long time to create a space capable of interpreting its important role and relaunching it into the life of Poblenou. 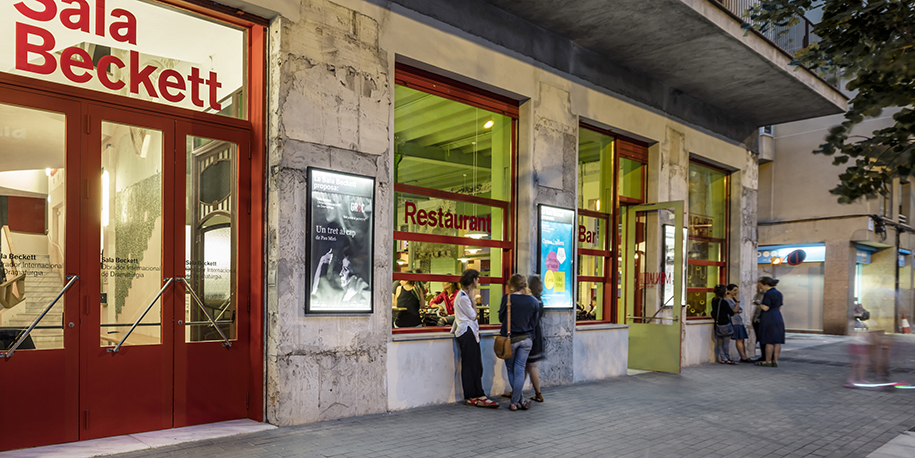 Ricardo Flores and Eva Prats spent much time learning about the production activities and theatrical experimentation, discussing with Toni Casares and the other future users of the new spaces. The architects visited Théâtre des Bouffes du Nord by Peter Brook and studied several cases, enabling them to develop a personal and profound awareness of the subject matter which they then reinterpreted inside the old building with their meticulous ability to dialogue with spaces and their histories.

The design of the new Sala Beckett reflects the dense memories profoundly rooted in the culture of the historical industrial district.

Flores & Prats note “the ruinous state in which we encountered was of interest, not because we wanted to restore it, but rather to take the ruin forward and make it a participant, with its unfinished character of superimposed periods, in a new reality that would continue to be updated on this foundation. (…) the challenge of the project is therefore to adapt the building to its new use without banishing its ghosts.”

The design by Flores & Prats stems from the spatial and decorative qualities of the existing building, a part of the identity assumed by the city of Barcelona at a time when the workers’ associations emerged along with their surprising capacity to create space for entertainment.

Each significant element has been carefully collected, from the frames to the doors, the poly chrome tiles, rose windows, the stratifications present in the masonry fabric and the plaster work. The design process included an in-depth study of the environmental characteristics, identified and developed through numerous drawings and detailed study models.

Toni Casares, playwright and director of Sala Beckett underlines that “the new Sala Beckett is a space where the audience member enters and breathes, understands, feels that they are not customers for an industrial product, but part of a dialogue, a person who makes sense of what is presented on stage.”

The building constructed in the 1920s was in ruins, however it had a high number of features that Ricardo Flores and Eva Prats have chosen not only to leave in place, thereby leaving substantial traces of the original building intact. They also wanted to project into the future, turning all the signs and stratifications of time and the uses of the building into a device through which to give further meaning to the drama- related research conducted by Sala Beckett.

The building is located at the intersection of Carrer de Pere IV and Carrer de Batista, in the heart of Poblenou. The corner opening in the façade makes the activities carried out on the inside visible and accessible. Most of the rooms located on the ground floor are used for public activities and this establishes a relationship of continuity with the urban fabric. Immediately after the entrance visitors come upon a welcoming, almost domestic setting. People can get a drink at the bar or sit in the restaurant while waiting for the performance to start, or they can sit on the benches or visit the box office to buy a ticket.

Characterized by high spatial articulation and surprising vivacity, the ground floor also has rooms that are not accessible to the public, such as offices and changing rooms for the performers, connected to the main performance area by a peripheral corridor that allows them to enter the stage from different points and thereby to accommodate the various stage structures planned in this room for 200 people.

Rehearsal rooms are located on the first floor along with another larger room, the former ballroom, which can be used both as a workshop and as a second space for performances. Other rehearsal rooms and service areas are found on the second floor.

The light that filters from above through a skylight into the entrance area gives rise to the complexity of the spaces and delivers a sense of unity to the whole building, gently reaching down to the ground floor. Here, in the lobby of the old cooperative, it guides the public towards the performance areas. 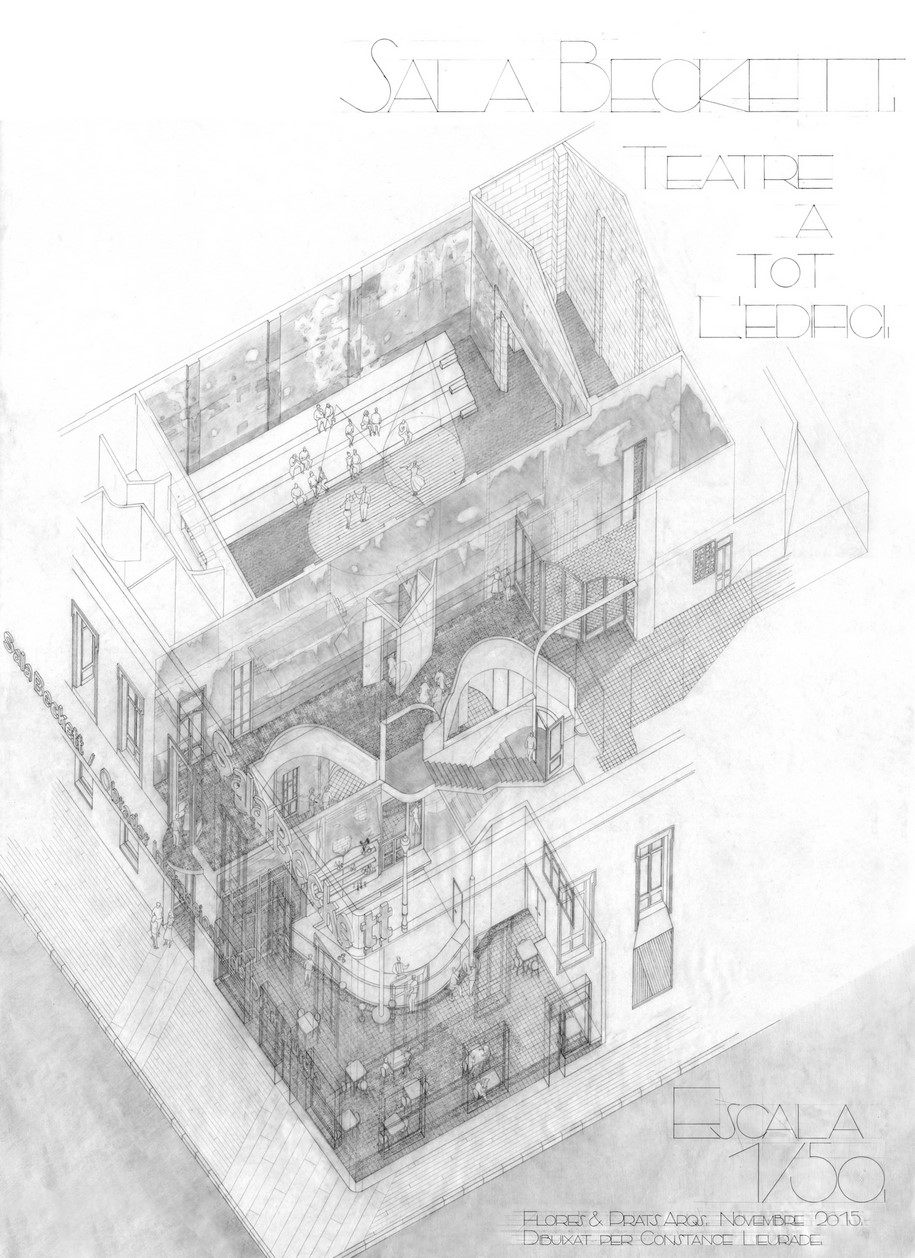 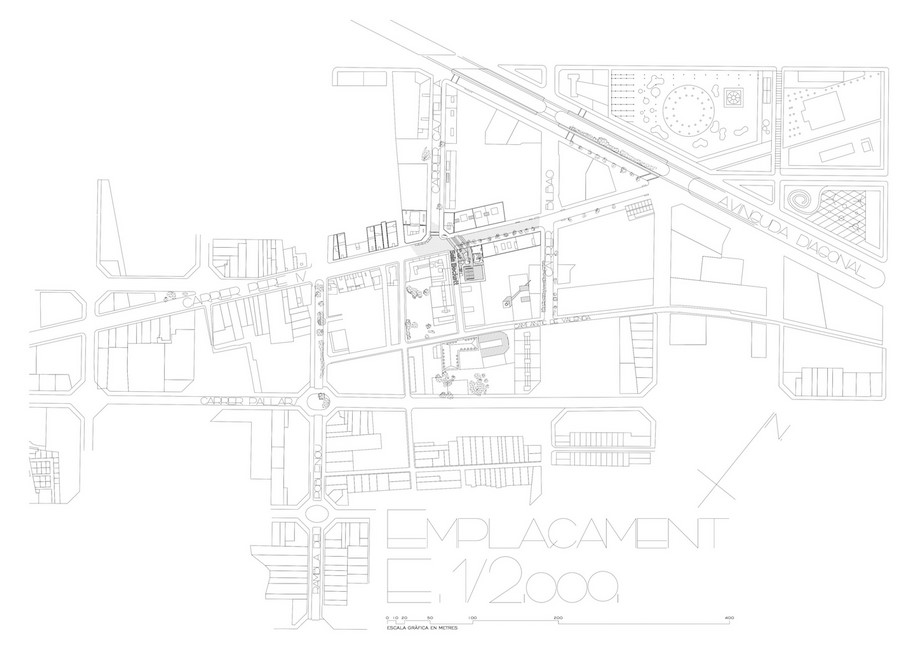 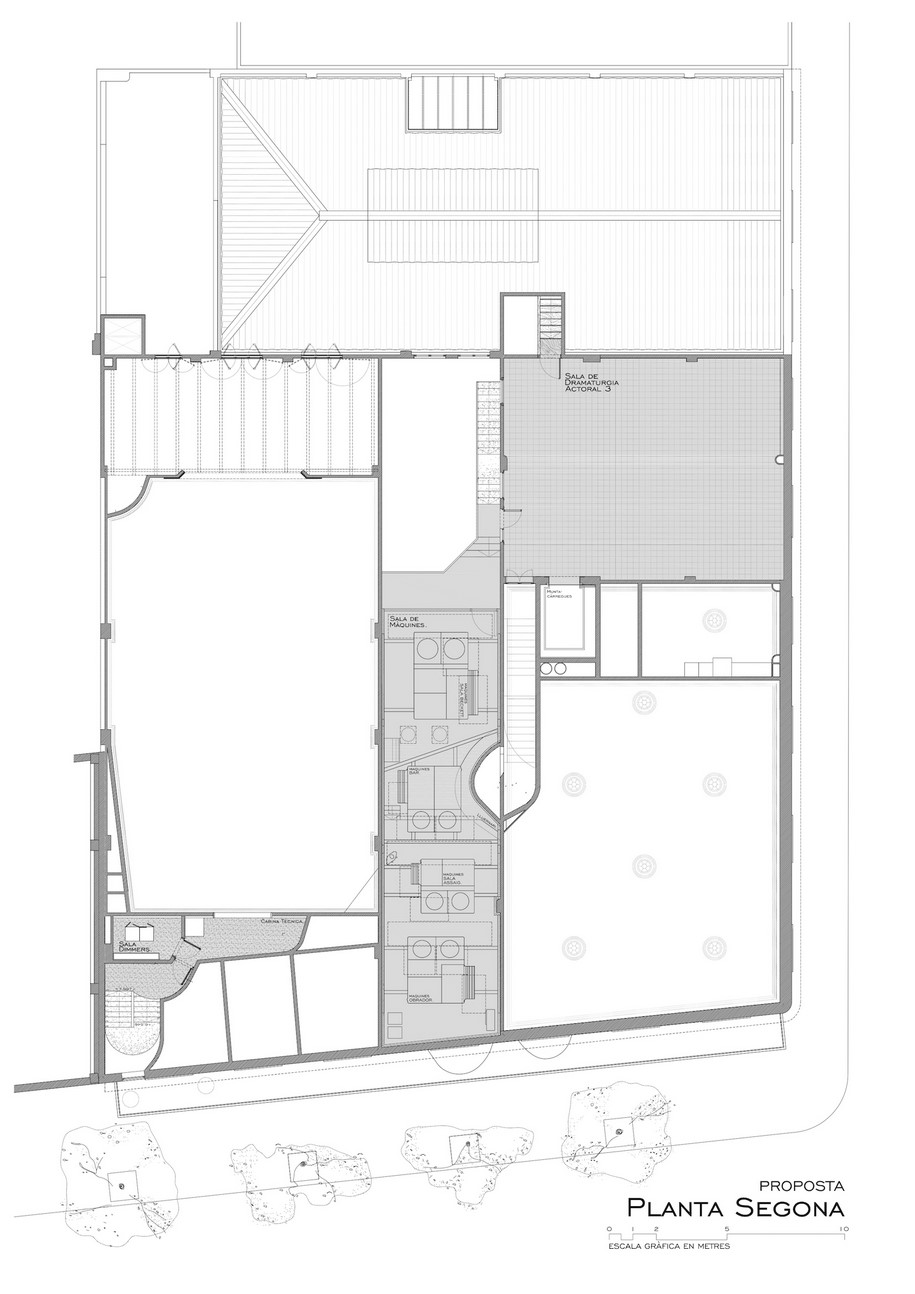 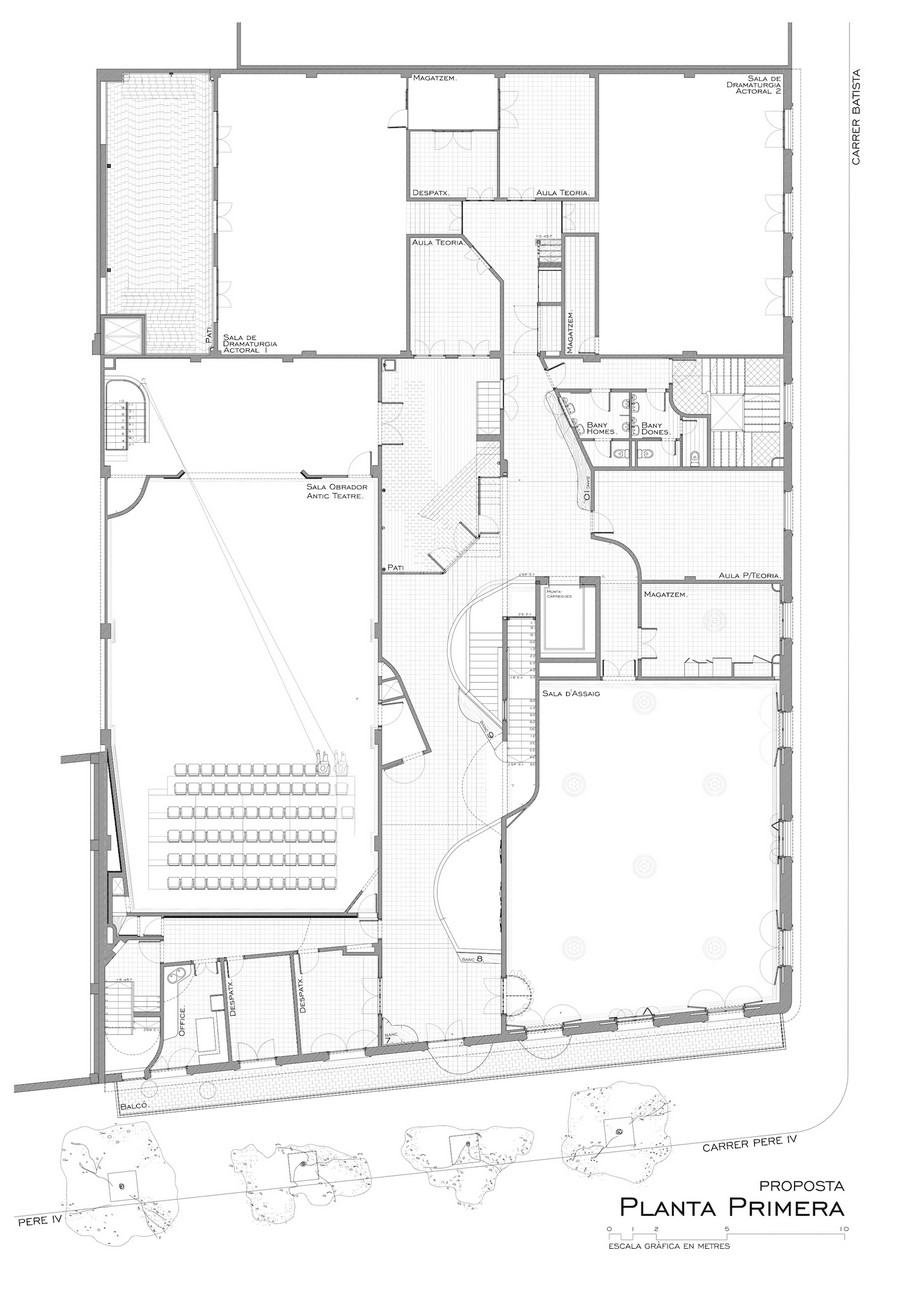 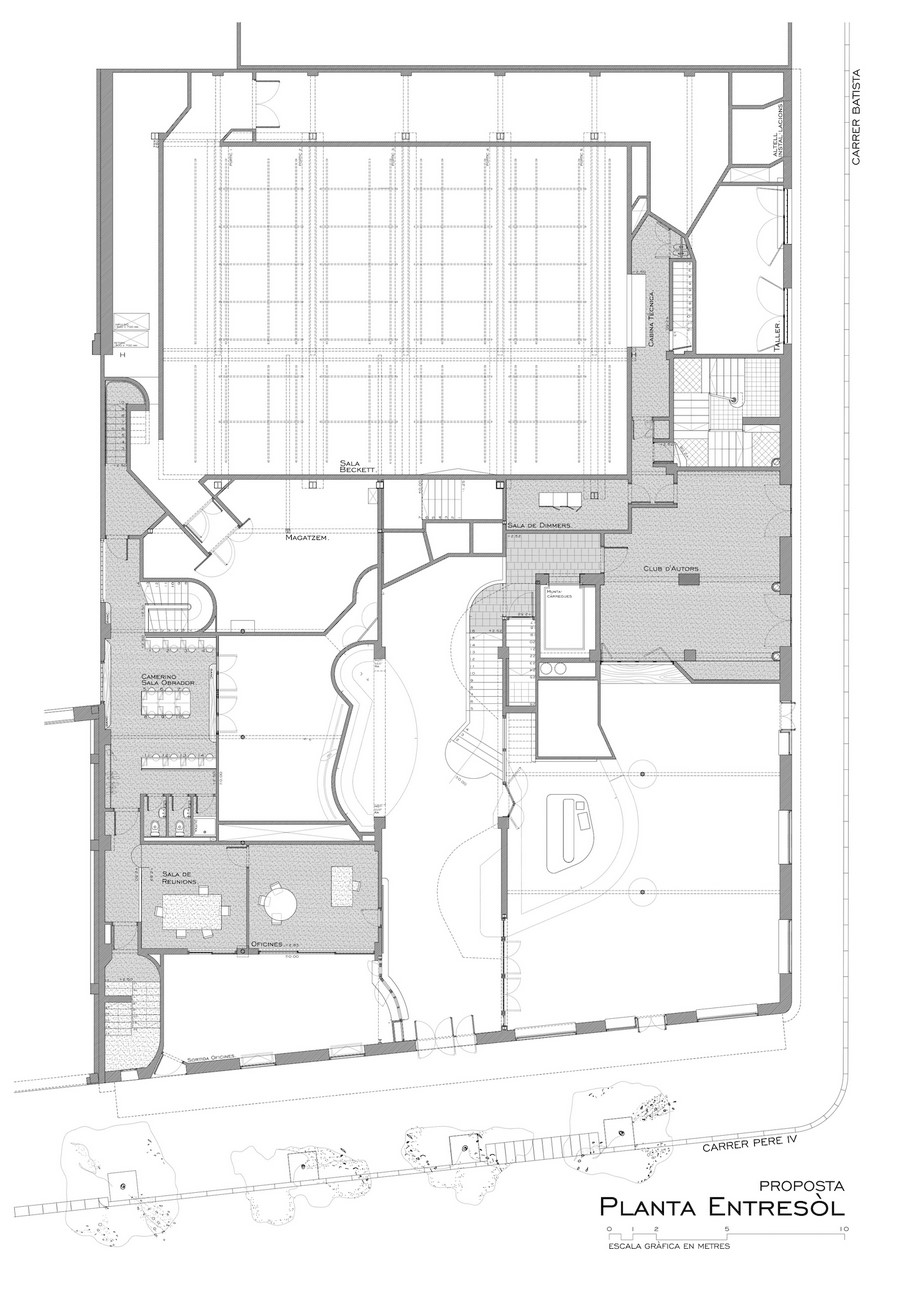 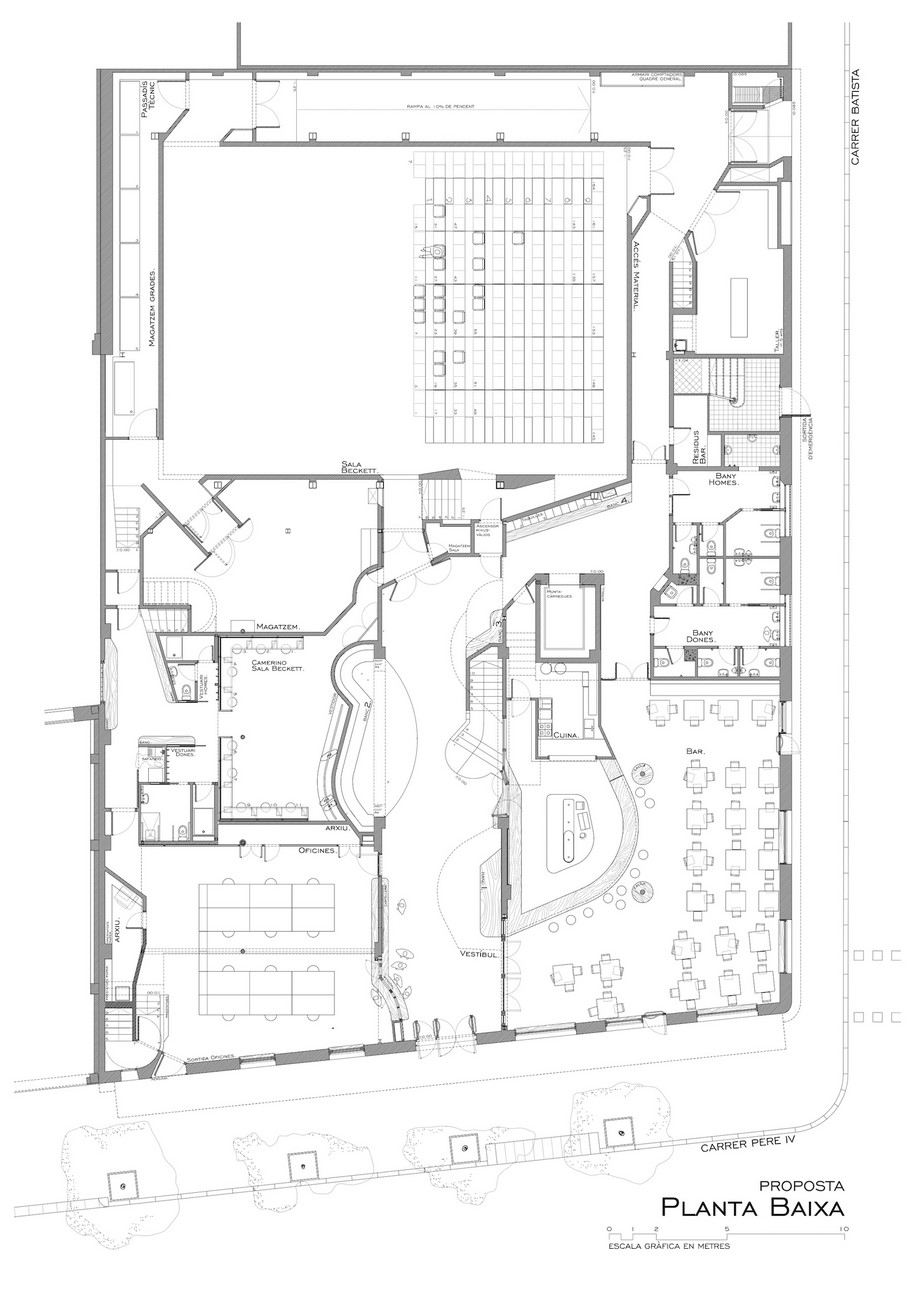 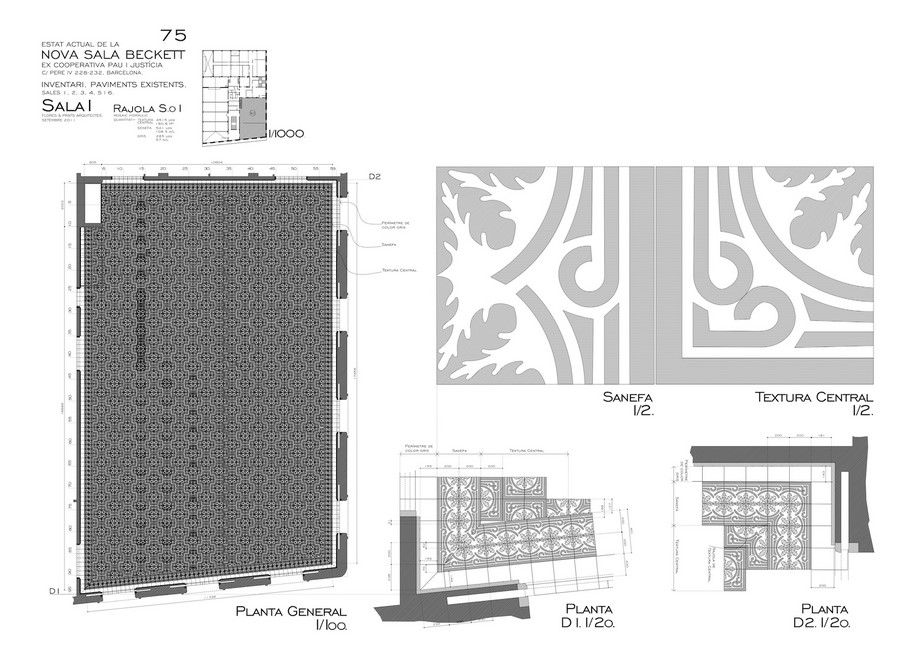 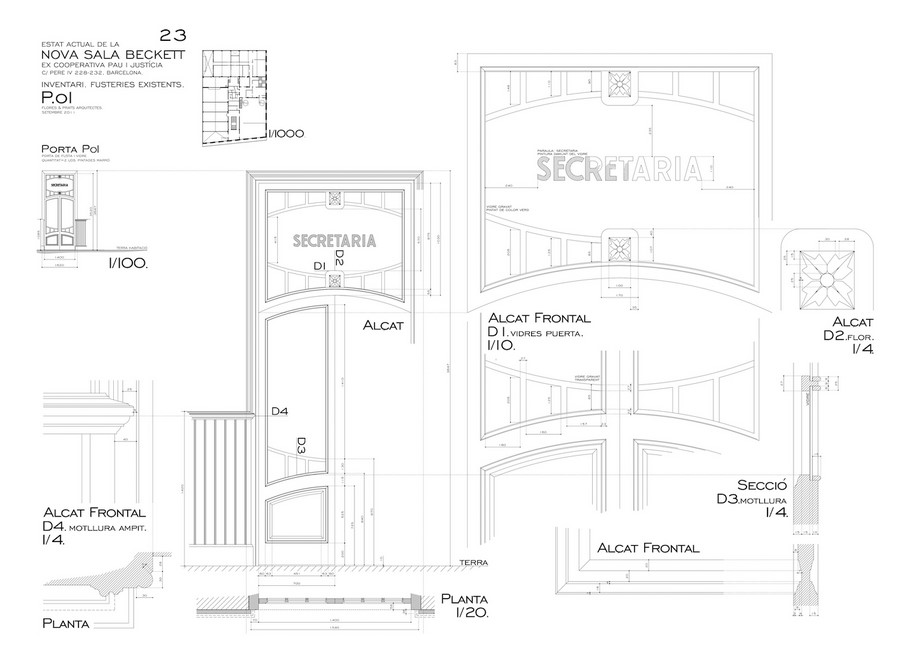 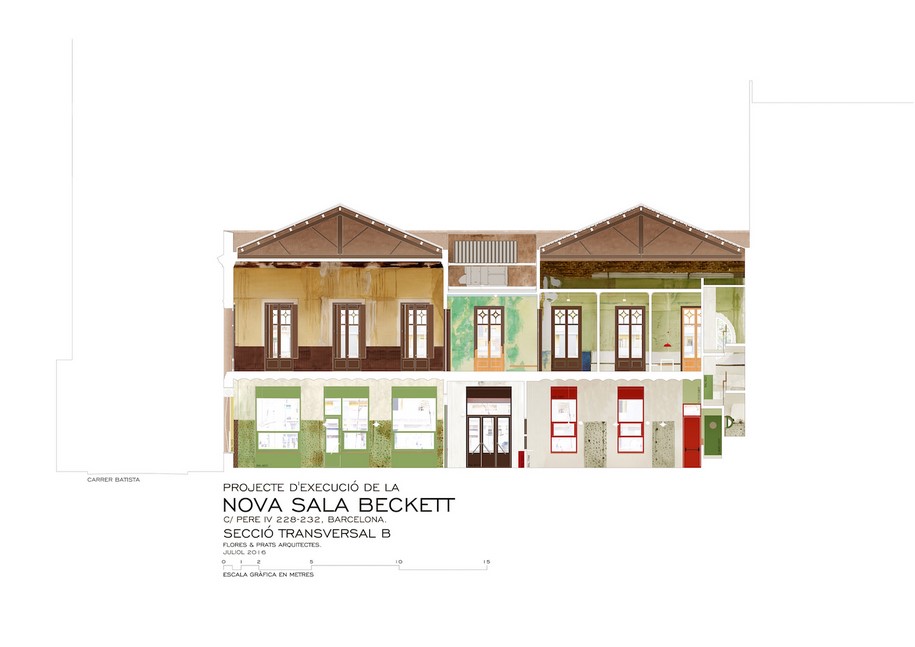 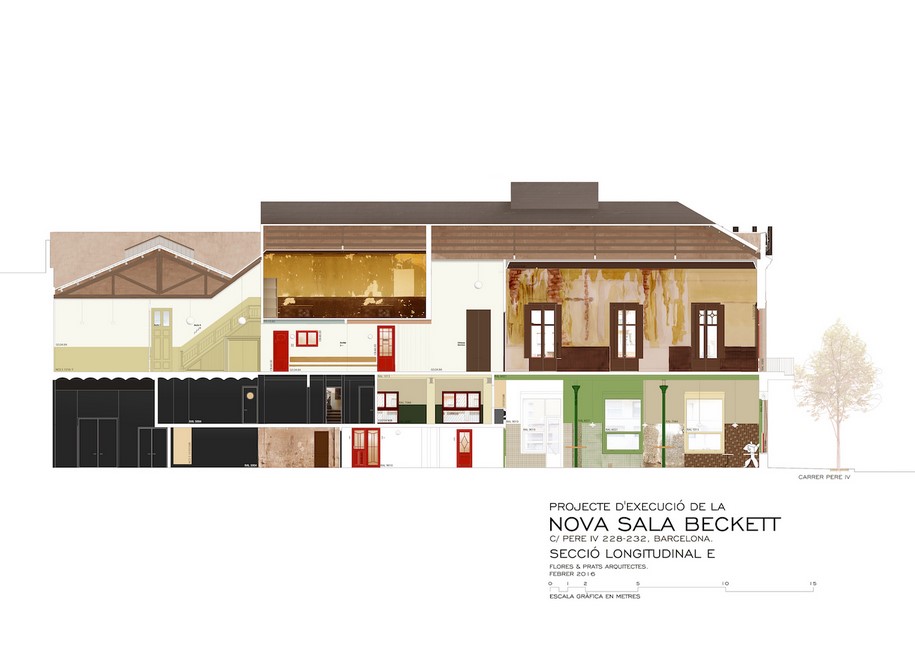 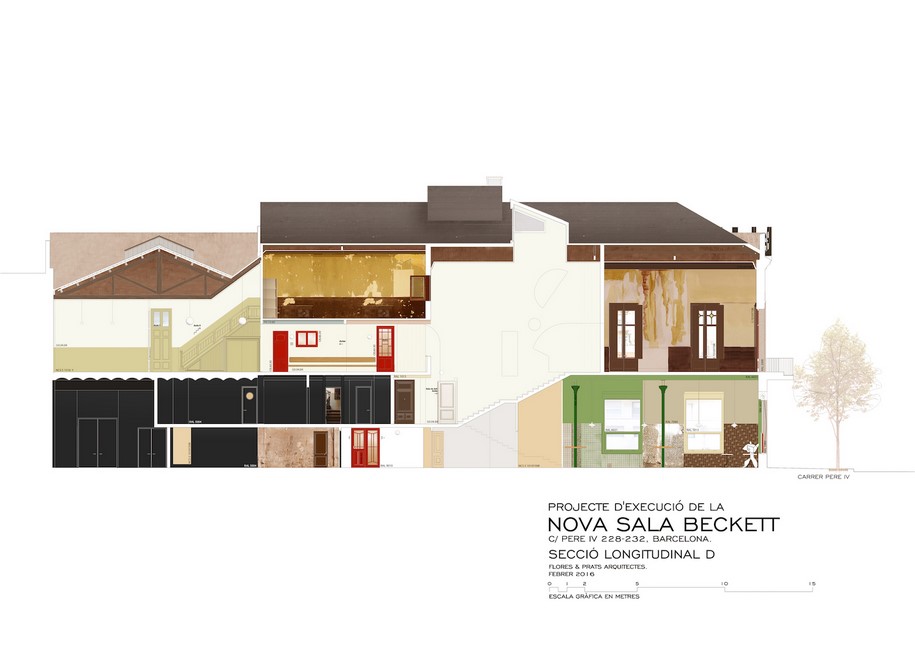 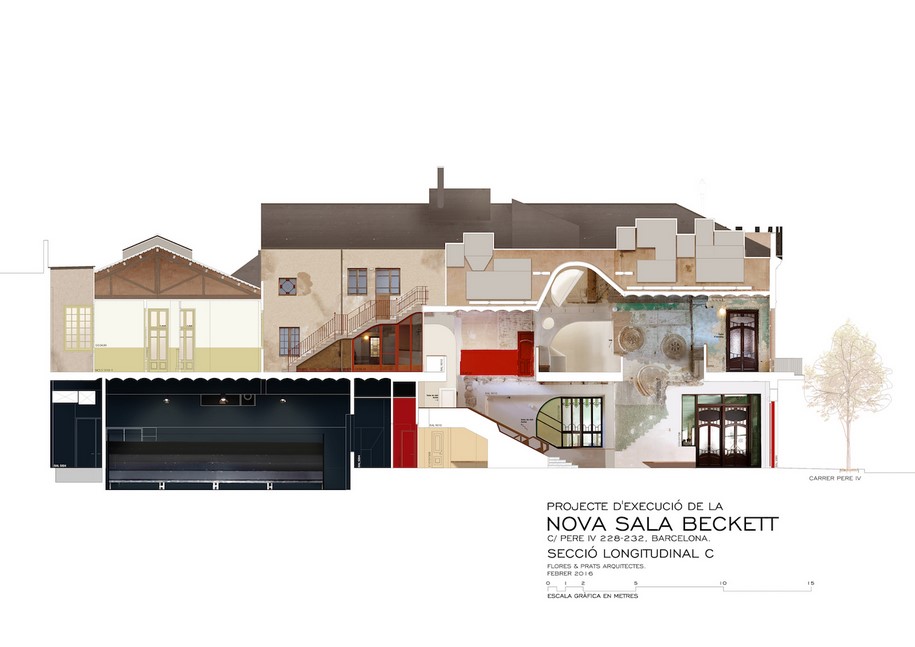 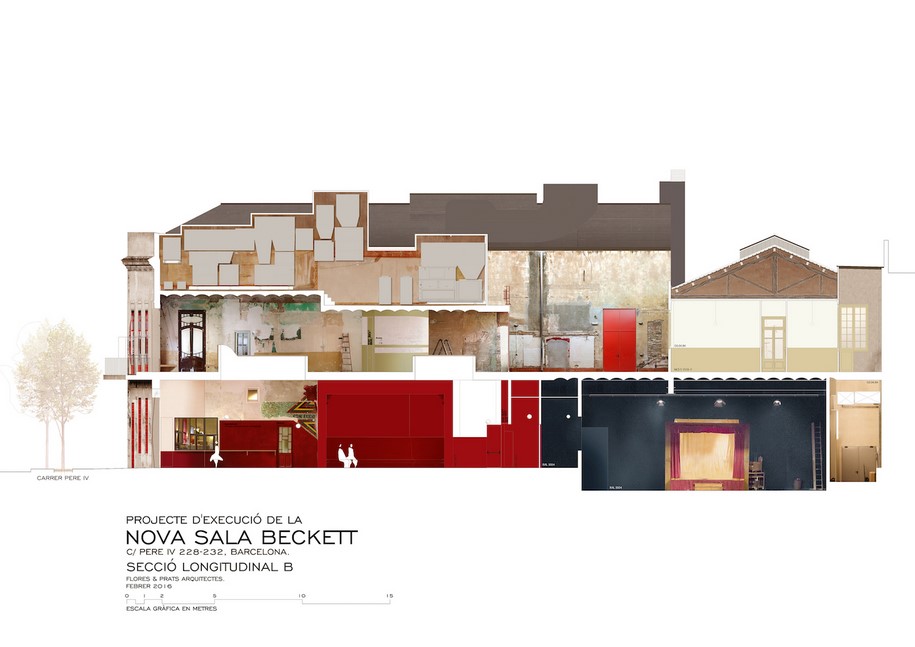 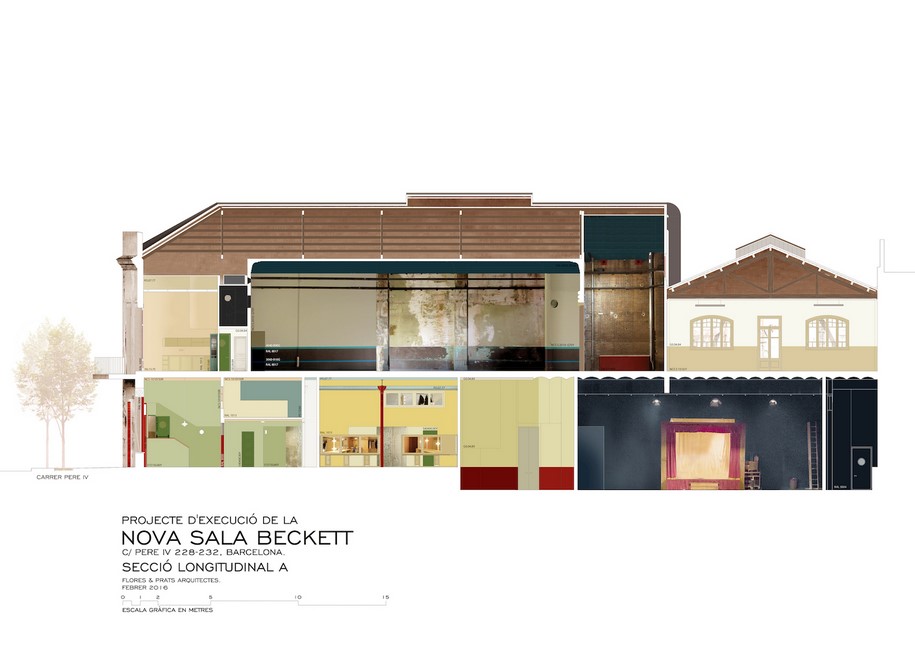 Program
Rehabilitation of the former social club Pau i Justicia as the new Sala Beckett / Internacional Drama Centre, including two exhibition spaces, classrooms for reading and writing drama texts, and a bar-restaurant open to the whole neighbourhood..

Flores & Prats Architects  were also among theten architects selected by architecture critic and historian Francesco Dal Co for the Holy See Pavilion, located on one end of the island of San Giorgio Maggiore. Read more here!