Bagua+Bhava participated in the International Architecture Competition “Reuse the Roman Ruin – Piscina Mirabilis” for the reuse of Piscina Mirabilis – one of the largest Roman freshwater cisterns built by Emperor Augustus in the 1st century AD in Naples, Italy – as a Contemporary Art Museum.

Piscina Mirabilis was a freshwater cistern on the Bacoli cli­ at the western end of the Gulf of Naples, southern Italy. One of the largest freshwater cisterns built by the ancient Romans, it was situated there to provide the Roman western imperial fleet at Portus Julius with drinking water. Besides that, Piscina Mirabilis is a Roman reservoir built by Emperor Augustus in the 1st century AD. 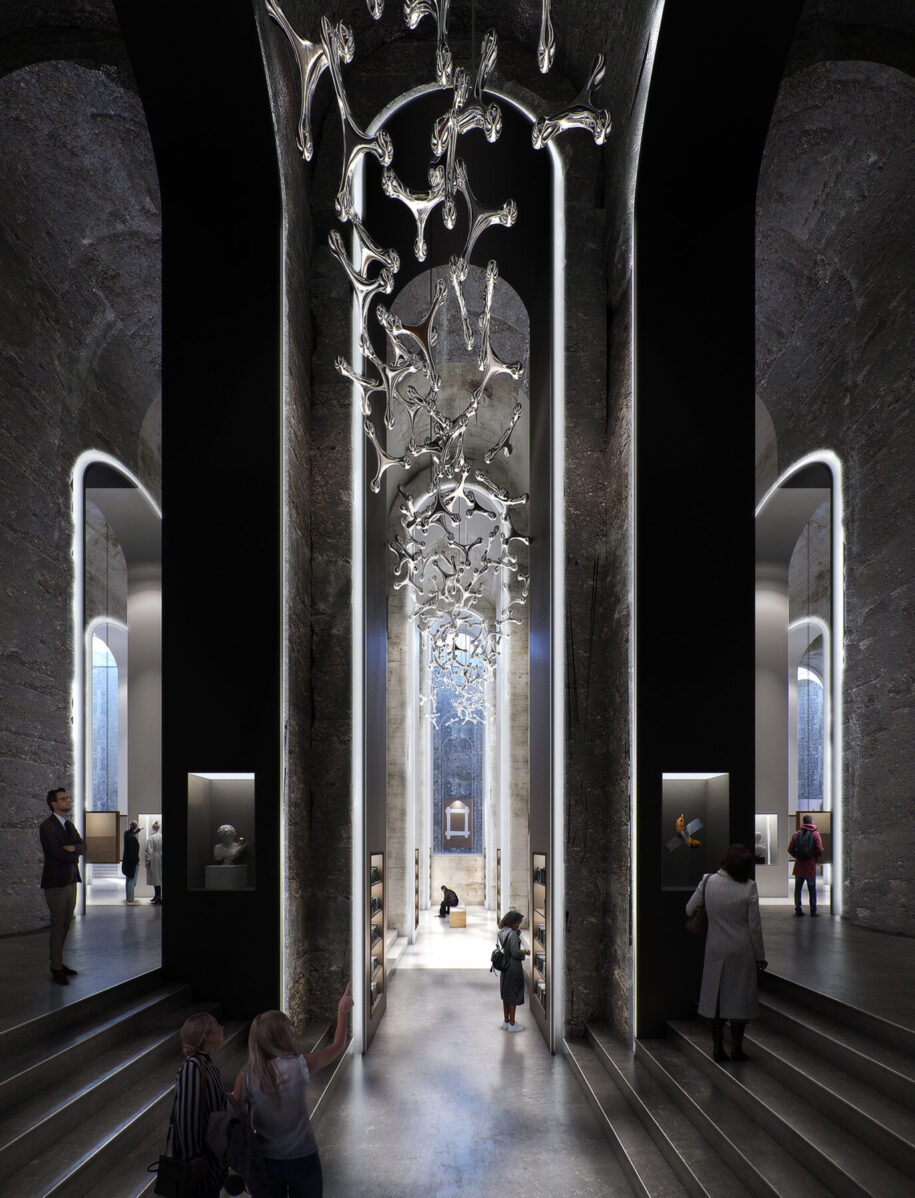 After twenty centuries, Piscina Mirabilis is already a magnificent architectural wonder of the ancient world. Thanks to Emperor Augustus, we can see those grand architectures nowadays and it will become an Italian pride forever. When talking about Emperor Augustus and the Piscina Mirabilis, it is always thought about the Roman Empire and have to mention a man, Julius Caesar, a Roman general and statesman who played a critical role in the events that led to the demise of the Roman Republic and the rise of the Roman Empire. As a result, Julius Caesar became one of the important elements of this new museum. 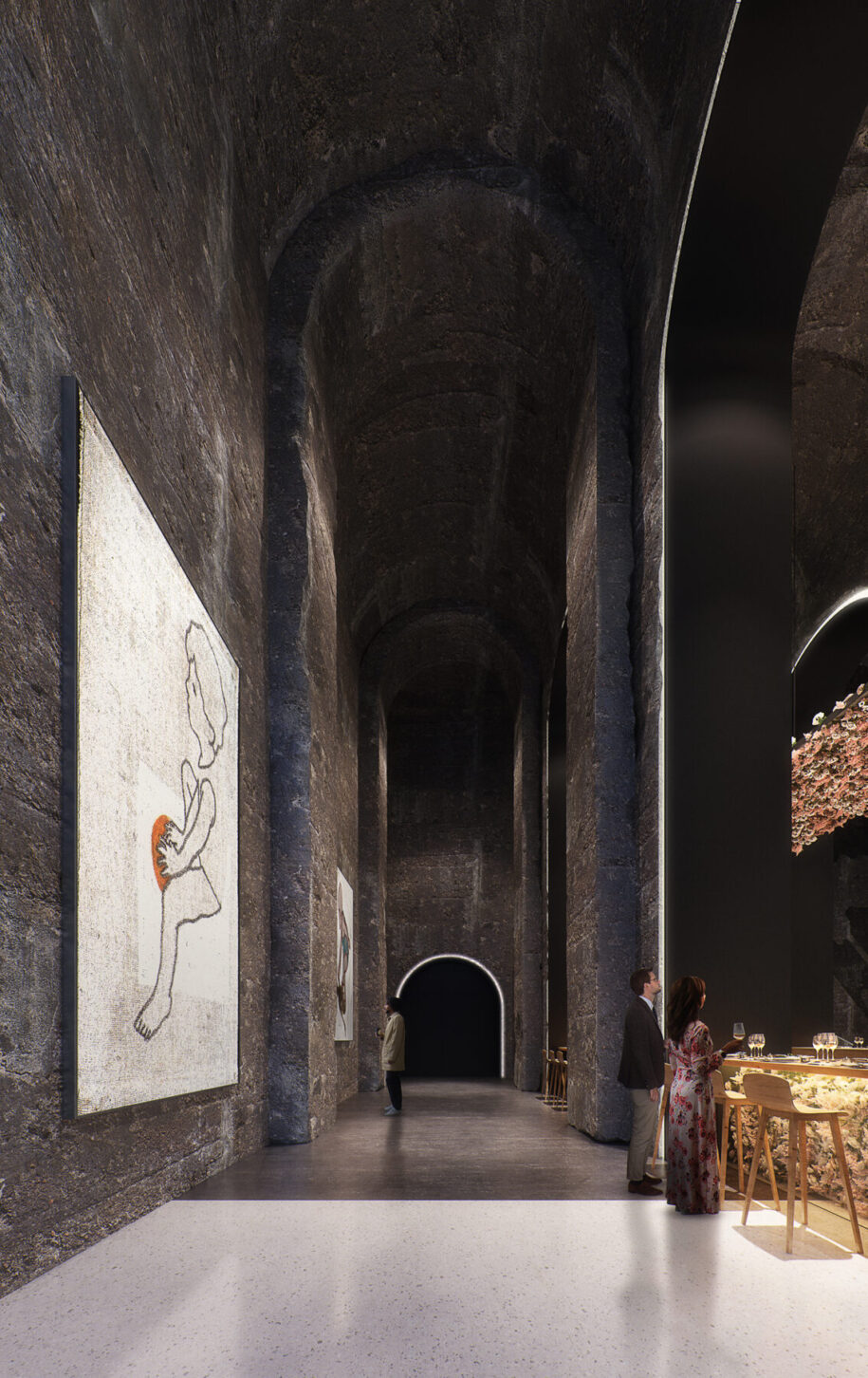 However, there is a question, how to balance the design of the old Piscina Mirabilis and the new contemporary art museum. From a reservoir to a new museum, almost twenty centuries, the minutes tick away.

Therefore, we used “TIME to be the inspiration finally.

No matter is the past or the future, even the present, the Piscina Mirabilis is an important history for people all over the world. Piscina Mirabilis and the Roman Empire spirit are always standing in the Italian heart. We all know that “TIME” is very important to everyone. Every year, every month or every day is very essential. As a result, we thought about the “Julian Calendar” which was proposed by Julius Caesar in 46 BC and it was a reform of the Roman calendar. We thought that the Julian Calendar and the Piscina Mirabilis are the same, that means the Italian will be proud of their legacy.

As a result, “Julian Calendar” became the overall design concept and the story.

January was named for the Roman god Janus. He is depicted with two faces, one looking into the past, the other into the future. Just like the past is the Piscina Mirabilis and in the future, it becomes a new art museum. When the audience comes into the museum, they can remember that this place was a reservoir in the past and they can be proud of their magnificent architectural wonder. 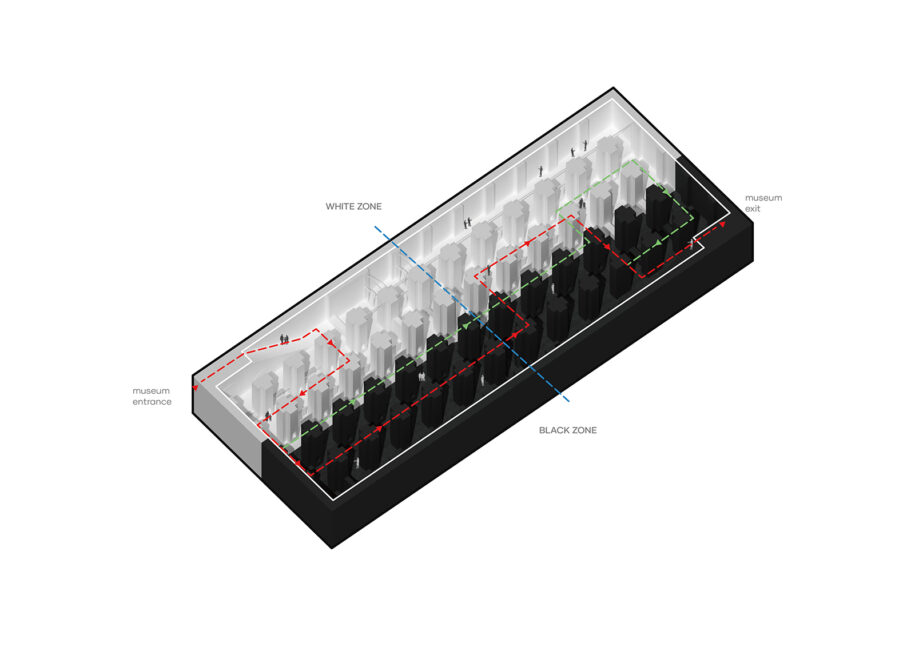 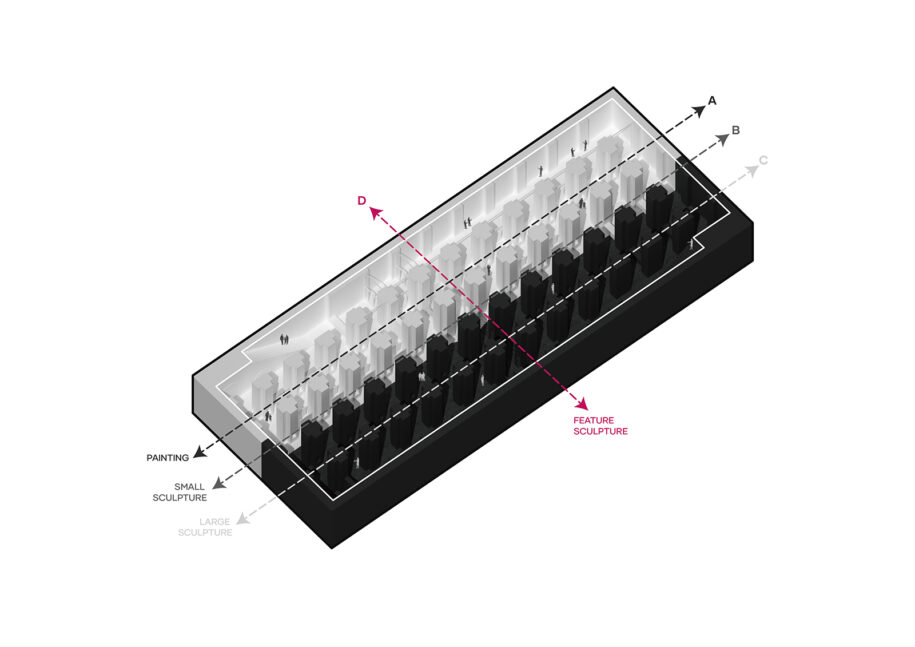 April is from the Latin word Aperio and the plants begin to grow in this month. In essence, this month was viewed as spring’s renewal. May is named for the Roman goddess Maia, who oversaw the growth of plants. Therefore, some plants and flowers are used to decorate the bar area. July was named after Julius Caesar in 44 B.C and August was named to honor Augustus Caesar. The spirit of them can be poured into the new museum. 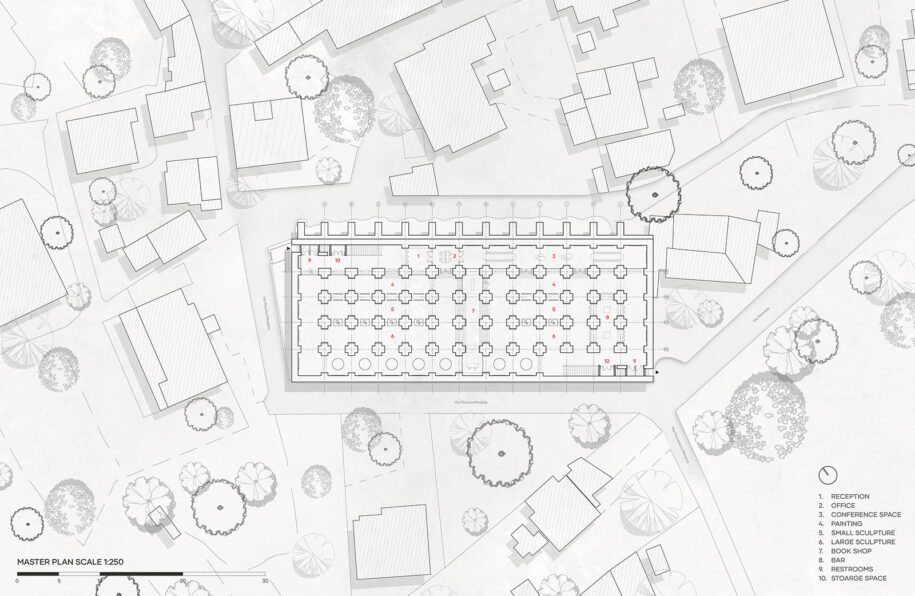 Concerning the artworks and the artists, the white zone focuses on the paintings and the artists such as EUGENIA VANNI, Francesco Clemente, and Serena Vestrucci. The black zone focuses more on the sculptures such as the works by Willy Verginer, VALERIO BERRUTI, and Arcangelo Sassolino. Finally, after visiting the museum, the audience can know more Italian artists and art. And in the meantime, they can be proud of their history, Caesar, and Augustus. In the future, it is hoped that Piscina Mirabilis can be reserved forever and become a meaningful place for all the people. 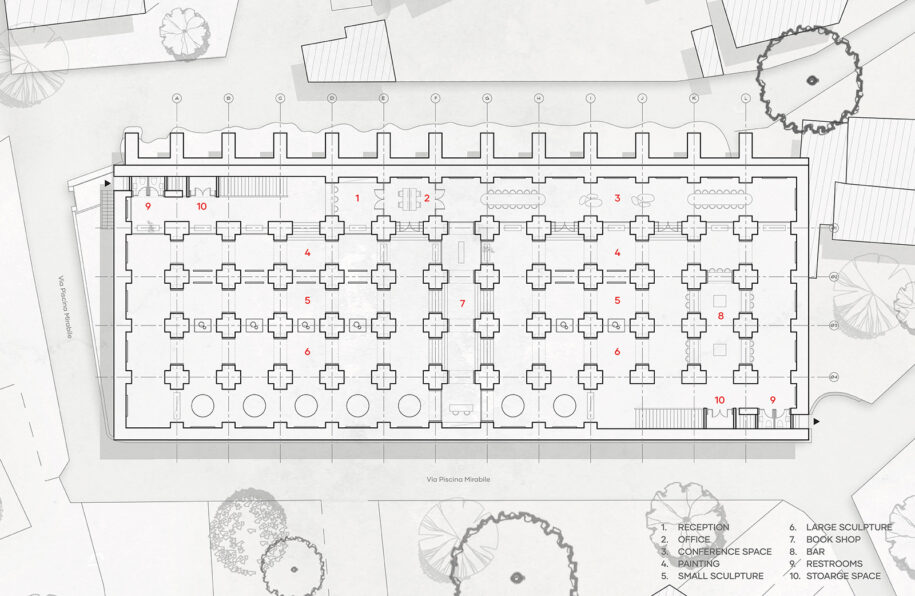 Artwork Planning is very simple in the new museum. Mostly divide into 5 parts. Firstly, Path A is focused on the painting. Path B is the small sculptures display and Path C is the large sculptures. Path D is the feature sculpture by Loris Cecchini and it is hanging from the ceiling. 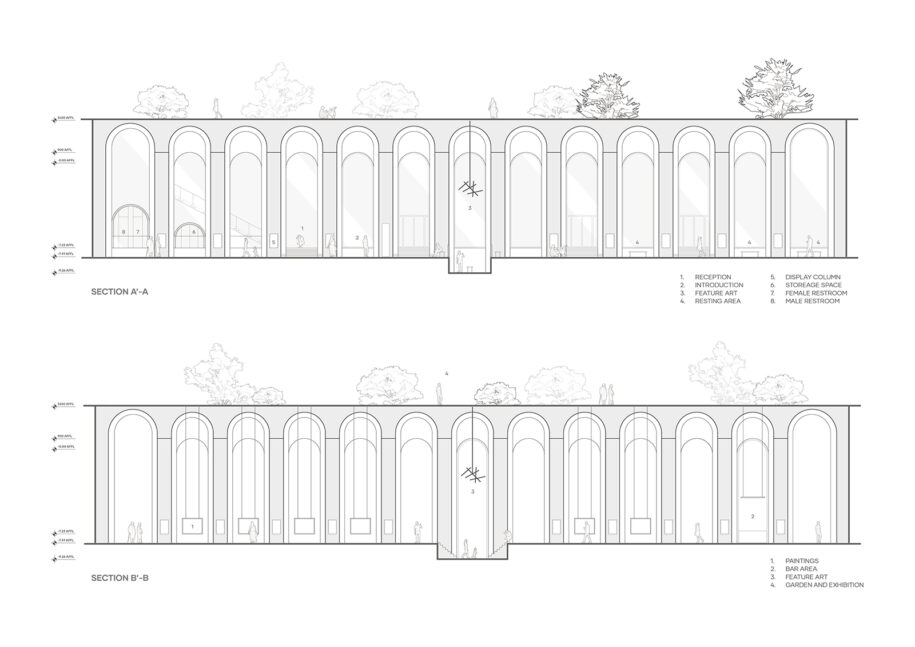 Last but not least, most of the pillars will be designed as a new design column.

About the circulation in the museum, there are three main routes for the audience. First of all, the audience will follow the red path from the entrance, and then they can walk thought the path between the small sculpture and large sculpture in the black zone. After that, they can go back to the green path which mostly focuses on the painting until the bar area. The middle one, the blue path, is the book shop. They can get some rest and read some books in this area.

by ELPIDA ROIDOUArchisearchhttps://www.archisearch.gr/wp-content/uploads/Mitsaion-17-cover-e1600677248343-370x700.jpg
SHARE THIS PAGE
WITH YOUR FRIENDS