The world’s first self-sufficient lunar colony, Platinum City, is a city fathomed as an organic computer, with its grandiose, drone crafted asteroid regolith architectures engorged on wet technologies and anchored to the platinum rich Rosetta Asteroid by a fragile tether of carbon nano-tubes that pierce the artificial atmosphere into infinity.

Born at the advent of the world’s first post-human industry of asteroid mining, sat proudly upon the moons equator in the depths of a magnificent asteroid crater lies Platinum City. 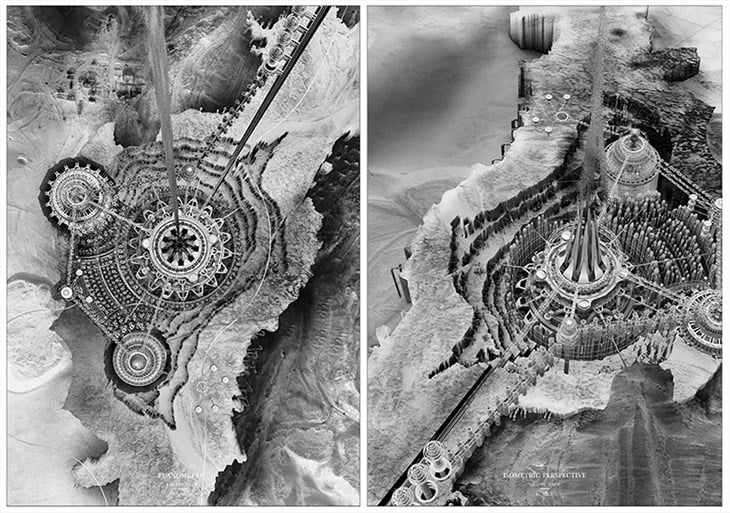 Inspired by the recent “Space Act of 2015” that enables the legal exploitation of space resources, the design project takes this theme to a logical end by exploring the resulting architectural consequences and their tectonic manifestations in the world’s first post-human city. Sean Thomas Allen`s research extrapolated near future technologies and urban ideas in the context of Peter Baufu’s “Eight Great Future [post-human] Transformations Of Architecture” into programmatic, tectonic and environmental agendas for Platinum City. Through a unique process of emancipatory, generative design research, a new post human architectural language is born through the systematic 3D scanning of computer componentry, with its resulting collection of 3D printed curiosities given scale and hierarchy in context to one another. 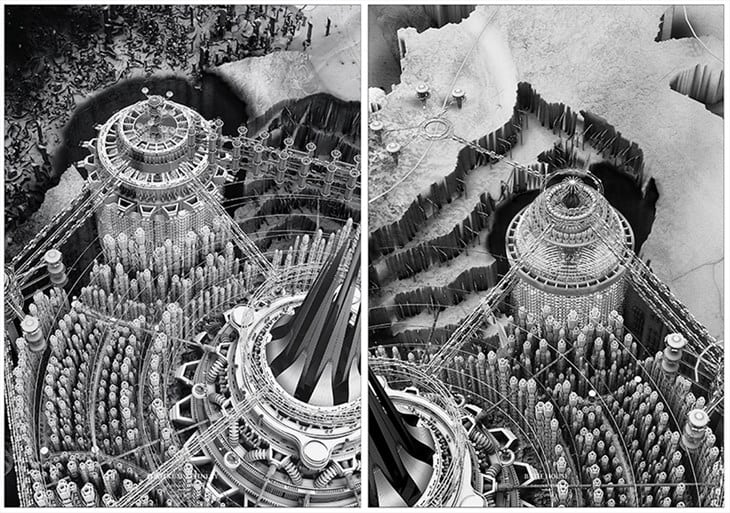 As a consequence, Platinum City overlays these bio-mechanical characters with narrative and embodies them within its urban fabric which exists somewhere between a pristinely manicured garden and a well-oiled machine. 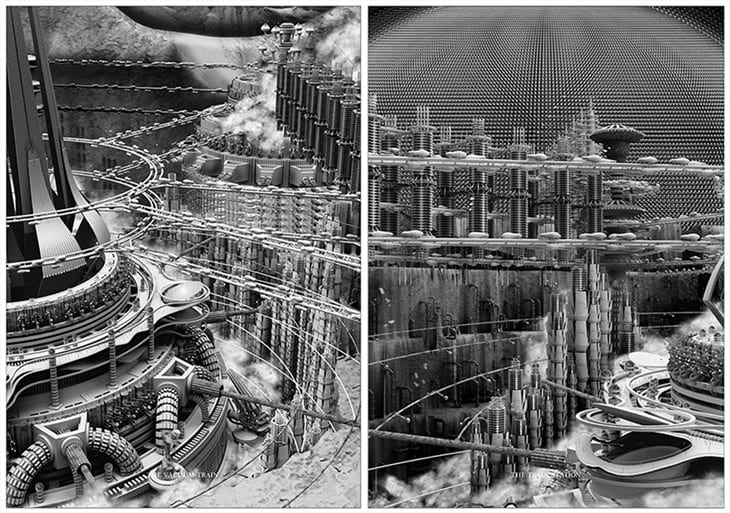 Lenovo, a Chinese multinational computer technology company, is developing the first synthetic human, and have created the world’s first ‘Post Humanist’ research facility located on the moon in an attempt to liberate themselves from industrial espionage and free themselves from the shackles of earthly ethics laws. Here, safely cocooned away from the crater zone, lies accommodation and laboratories for 12 teams of evolutionary scientists who aim to blur the boundaries between animal and machine, elevating sentient artificial intelligence. At the base of this hollow form lies the ‘charged landscape’, a watery suburb housing electric eels, whose energy is harnessed to power the city and is used by the scientists to help accelerate this technology-enabled evolution.

Specialist prefabricated modules are constructed in factory conditions on earth before being transported to the moon via space elevator. They are then assembled on site by construction drones. 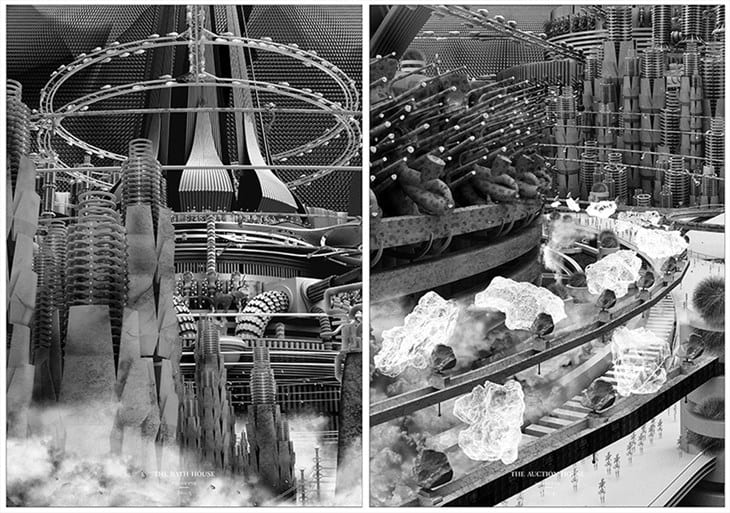 Size:
Currently spanning 7km from the city to the space elevator port and growing. Awaiting terraforming landscape update and expansion of the drone membrane artificial atmosphere.

The Post-Human Architecture Manifesto:
We must strive to live within a post-human technological utopia; a twitching, responsive, adaptive fabric. A sentient city with a terraformed, instrumentalised physical world with the capability to monitor our actions and everyday lives, collect data, process it and more importantly, respond to people’s needs accordingly. This dematerialised city will never be a static, heavy temple of the past. Instead, we must strive for a kinetic, lightweight and permeable city. Post-human technology such as cybernetic programs will continue to blur the boundaries between animal and machine by increasing the communication between the two, elevating sentient artificial intelligence to new levels. This technology should be capitalized upon, at a city scale, through a distributed agency between man and machine. A dynamic exchange between the two, through live coding, should be utilized to monitor and maintain these systems. We must accelerate the technology-enabled evolution of both our environments and ourselves, before it is too late. Act now. Evolve! 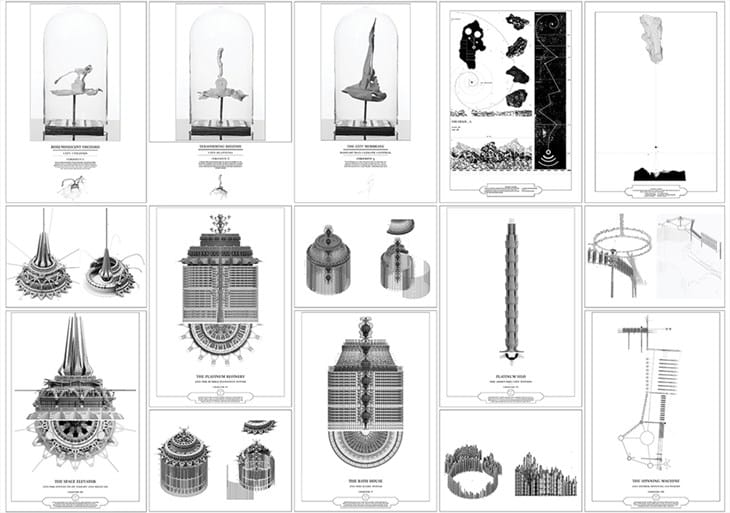 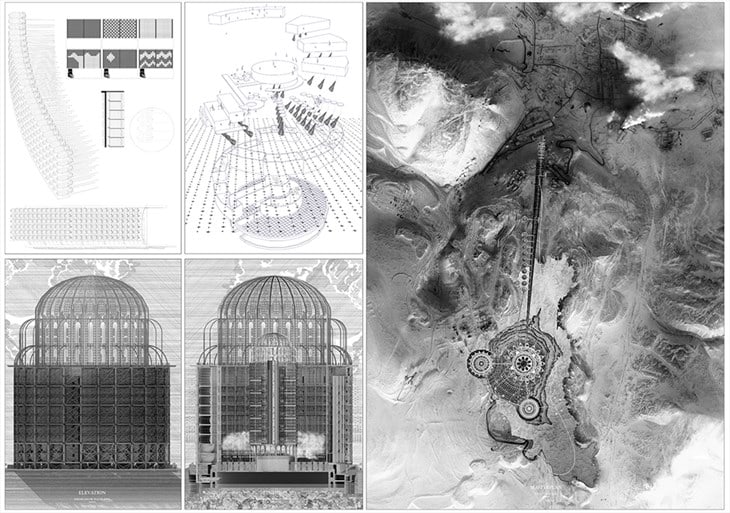 HONORABLE MENTION AWARD, MOONTOPIA – AN OUT OF THIS WORLD CHALLENGE…

READ ALSO: Made In Berlin / The German Capital through the Lens of George Messaritakis
SOURCE: ELEVEN MAGAZINE
1 COMMENT

The stress center in Thessaloniki | by Skarlakidis Architecture Studio

by MELINA ARVANITI-POLLATOUArchisearchhttps://www.archisearch.gr/wp-content/uploads/1J7A8818-HDR-370x700.jpg
SHARE THIS PAGE
WITH YOUR FRIENDS