The proposal of OCA Architects in collaboration with architect Harris Vamvakas in the international architecture competition for the New Kindergarten and Elementary School of Dolní Měcholupy, Prague, Czech Republic delivers an educational centre designed as an inspiring piece of representative and respectable public architecture.

The building generates its own urban anteroom at Kardausova street dominated by the tall frontal volume. The glassed ground floor opens to and activates daily street life through the partially public program of the library. A promenade surrounded by trees accompanies the access into the main foyer where the schools interior qualities are apparent. A pleasant atmosphere composed by a series of inspiring interconnected spaces surrounds the visitor who can chose to access the different school programs or go directly into the large playground facing him. Playful seating cascades, like the surrounding plot down, into the canteen area while a large sculptural staircase leads up into the classroom areas of both school stages. 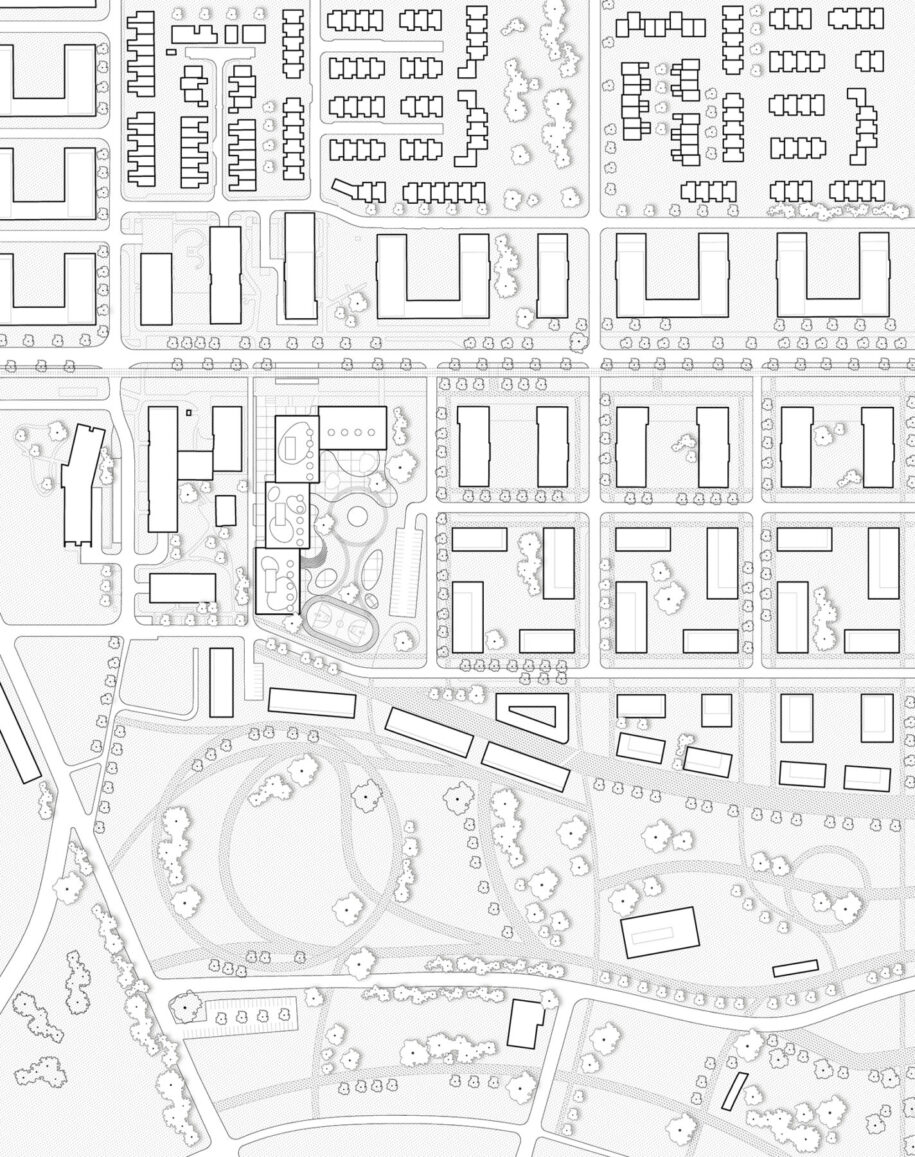 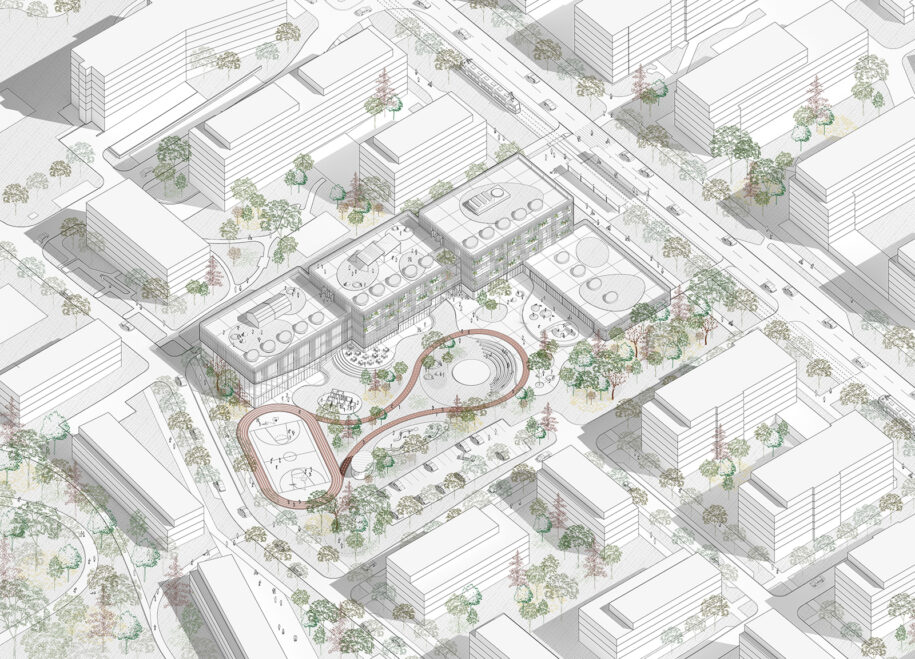 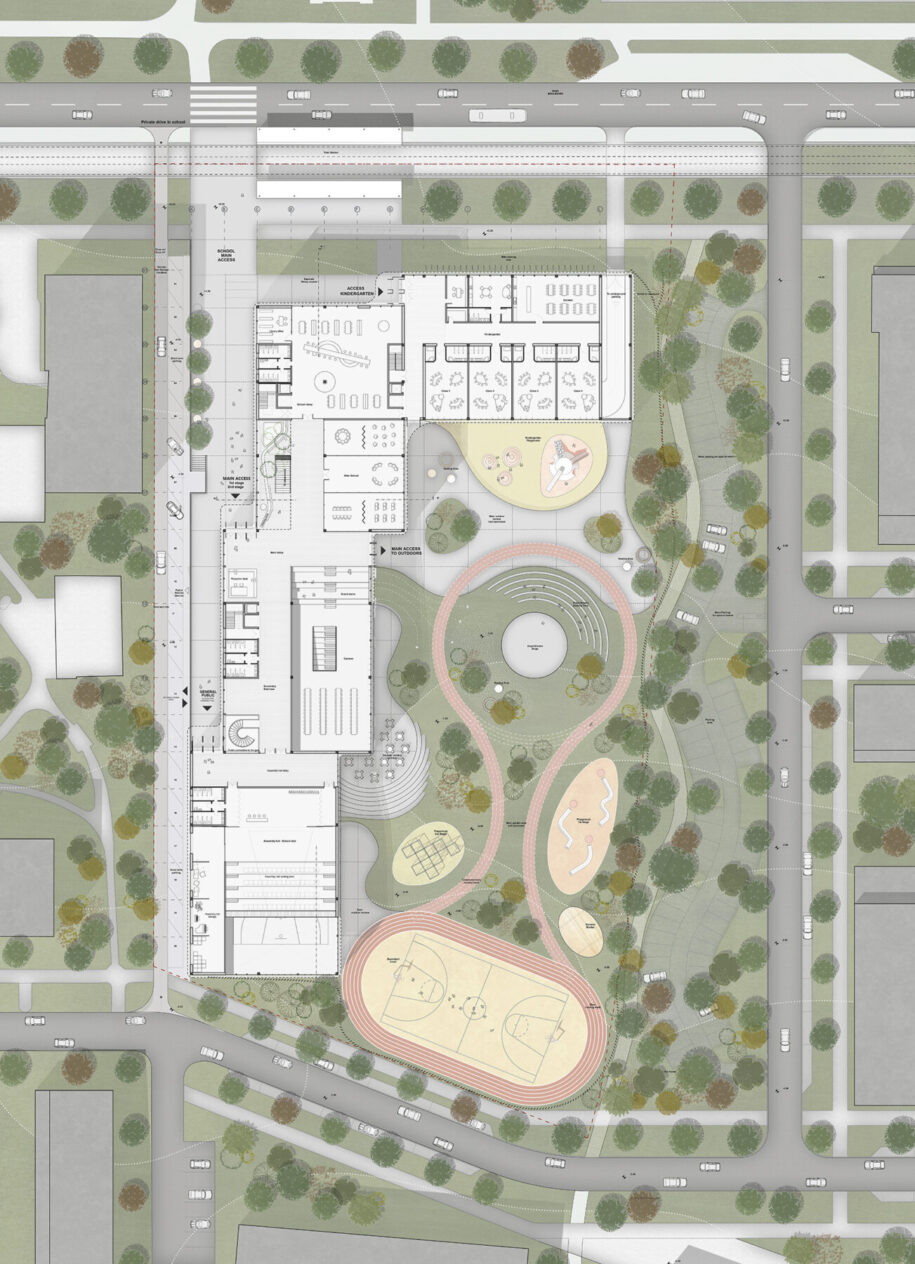 The core of the building is the flowing foyer area expanding into all six levels creating an inviting central space. 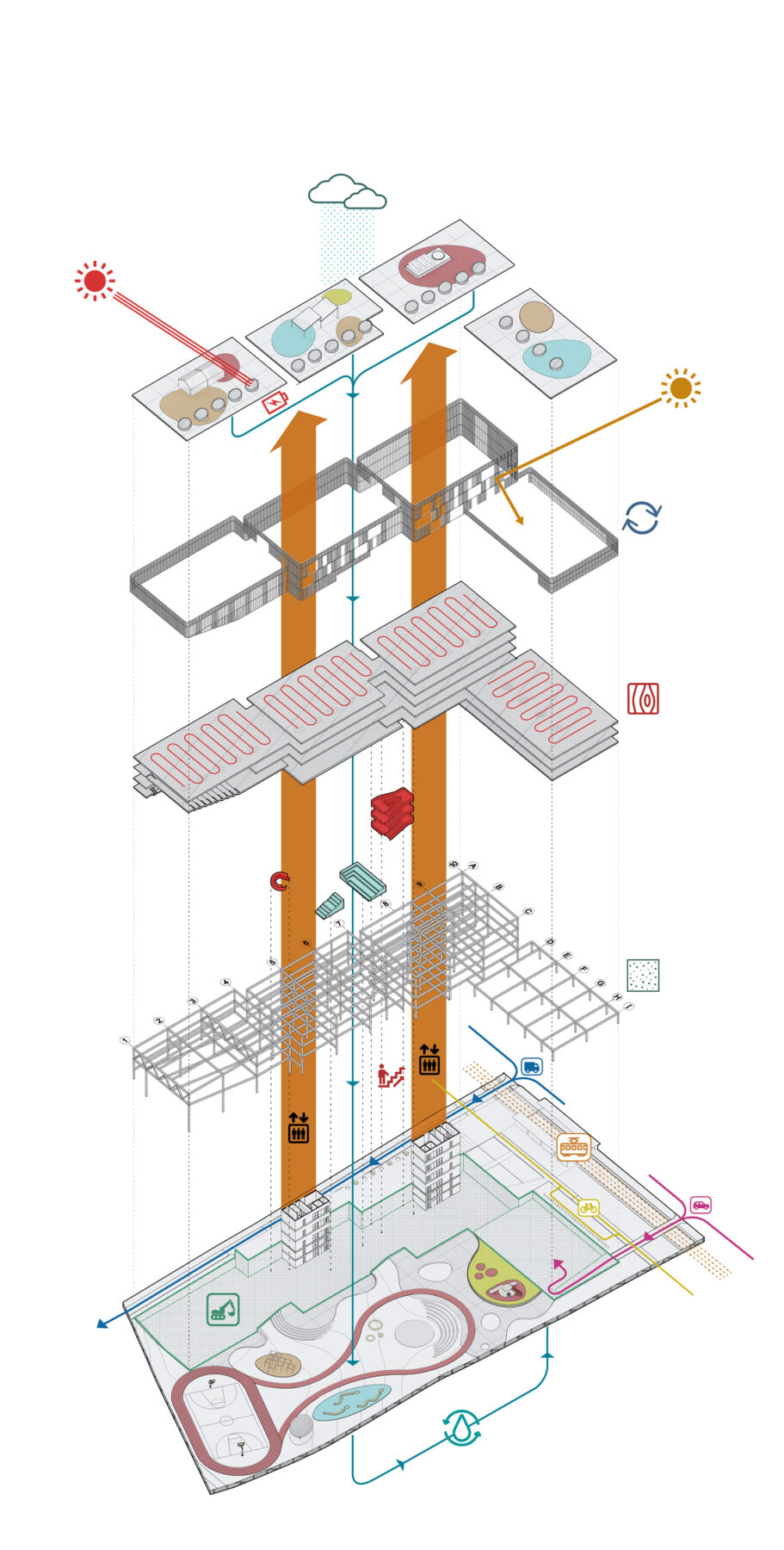 It is linked to all segments of the school: the canteen, library, after school club, studio, gyms, outdoors areas, assembly hall, vertical cores and both school stages. The school’s vertical organization allows for all partially public operation elements to be placed on the ground floor or below and for both school stages to remain separated on the upper levels connected through an easy to monitor stair and vertical cores with lifts and emergency staircases. 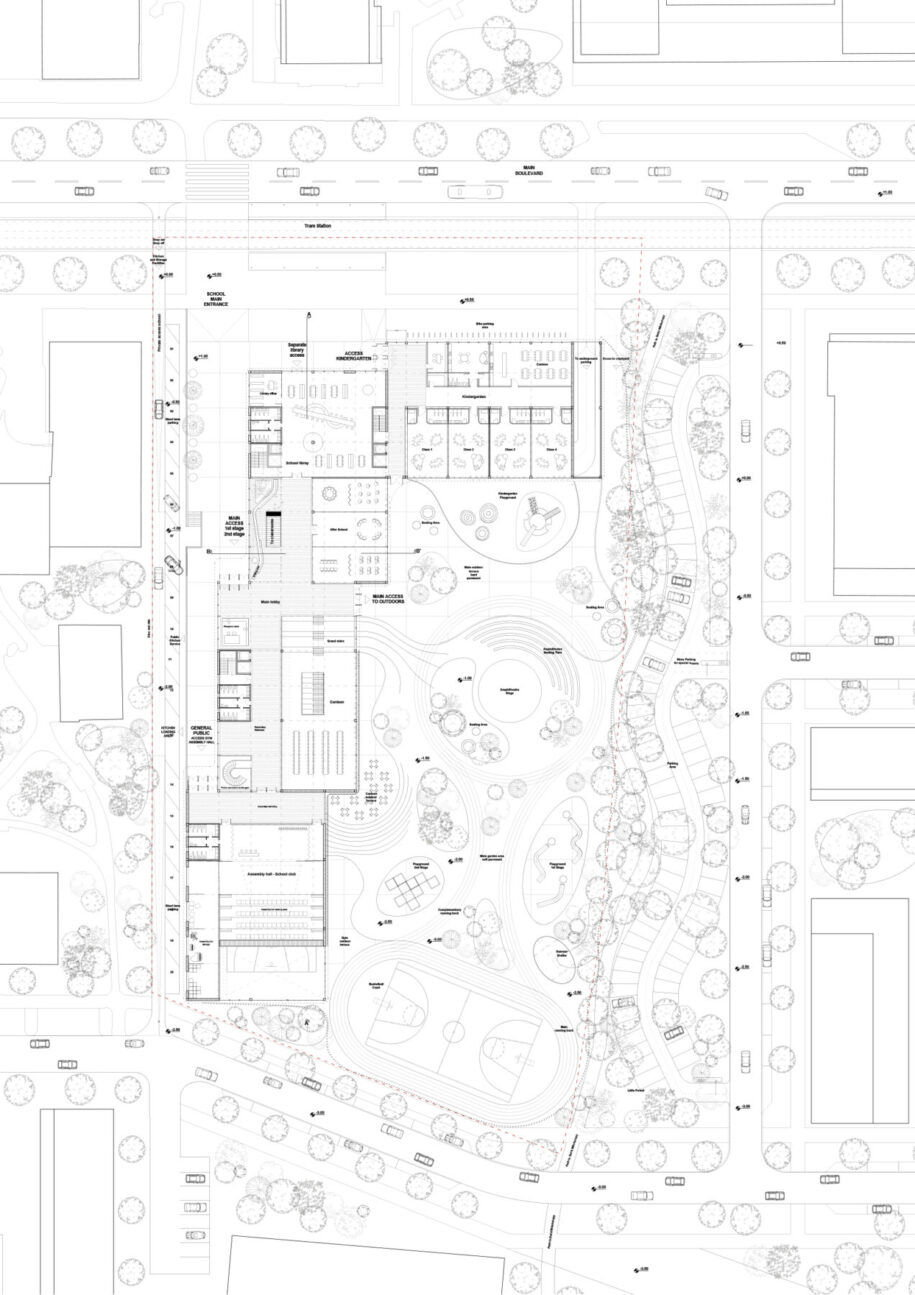 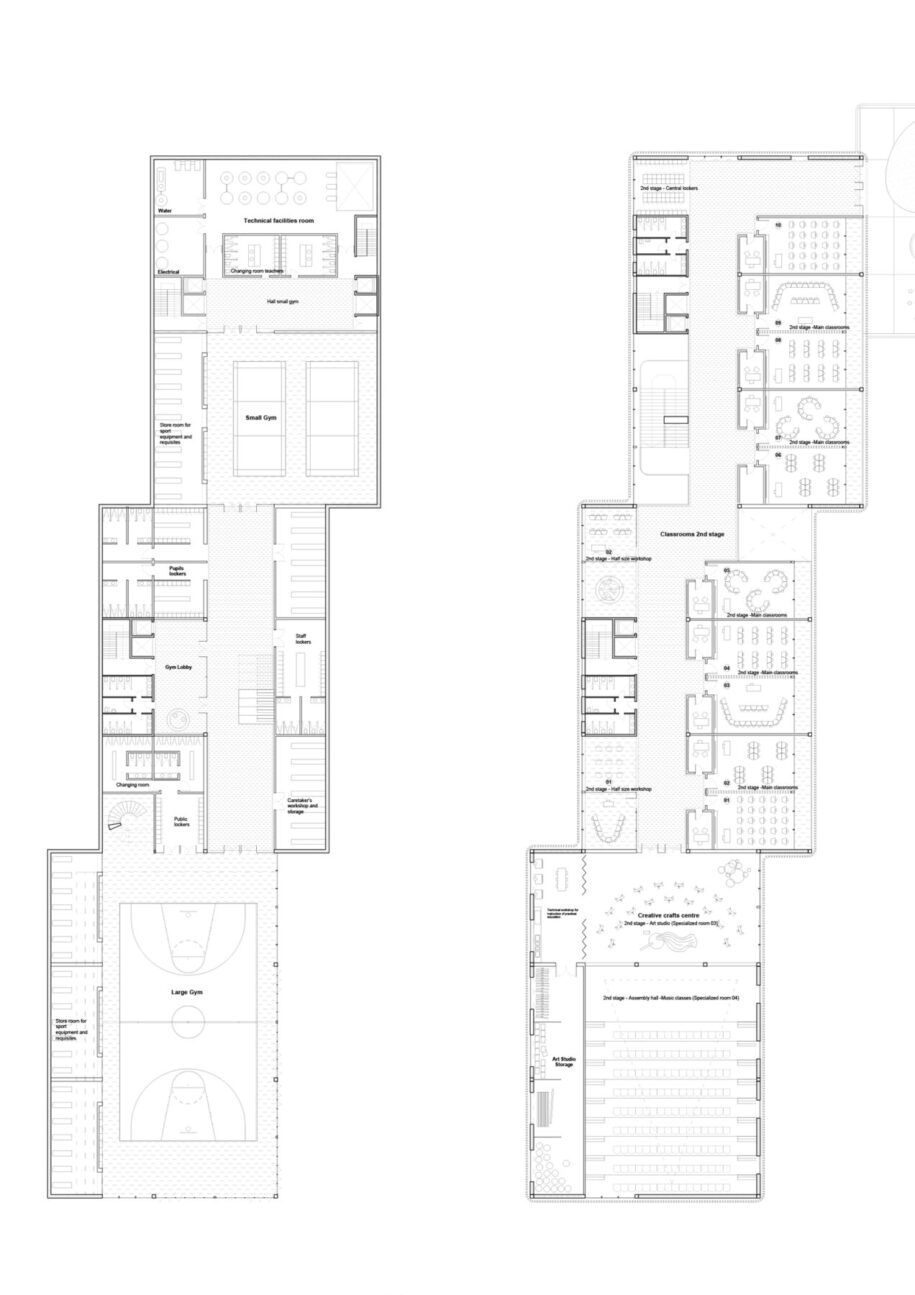 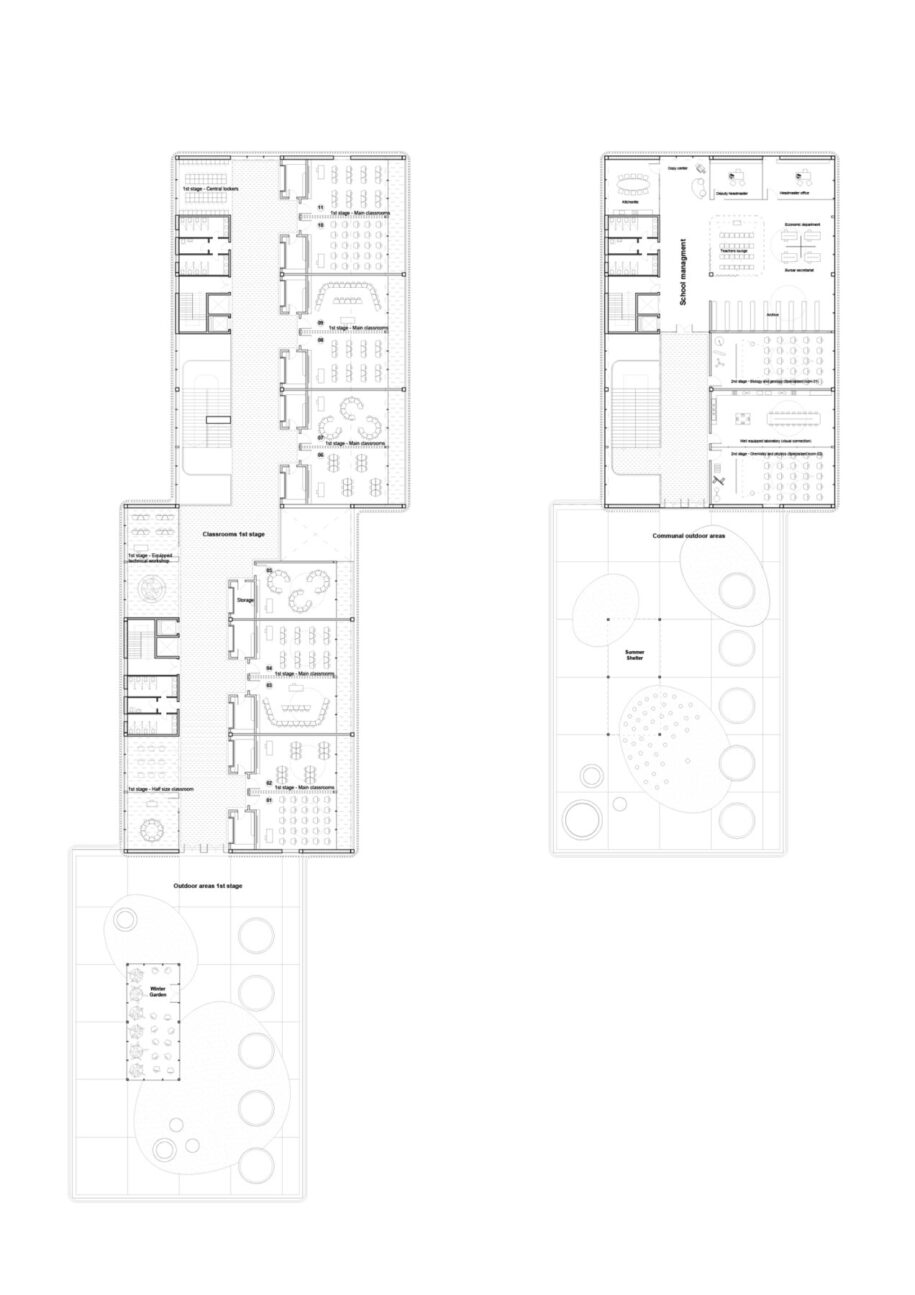 Both stages of the school are designed as self-contained educational units with parallel classrooms facing the courtyard. These are articulated by a generous connecting area illuminated through the opposite west facade. Facilities, vertical cores, auxiliary spaces and small classrooms interact and enrich the space through moveable walls. At the end of each distribution area an outdoors rooftop playground can be found. 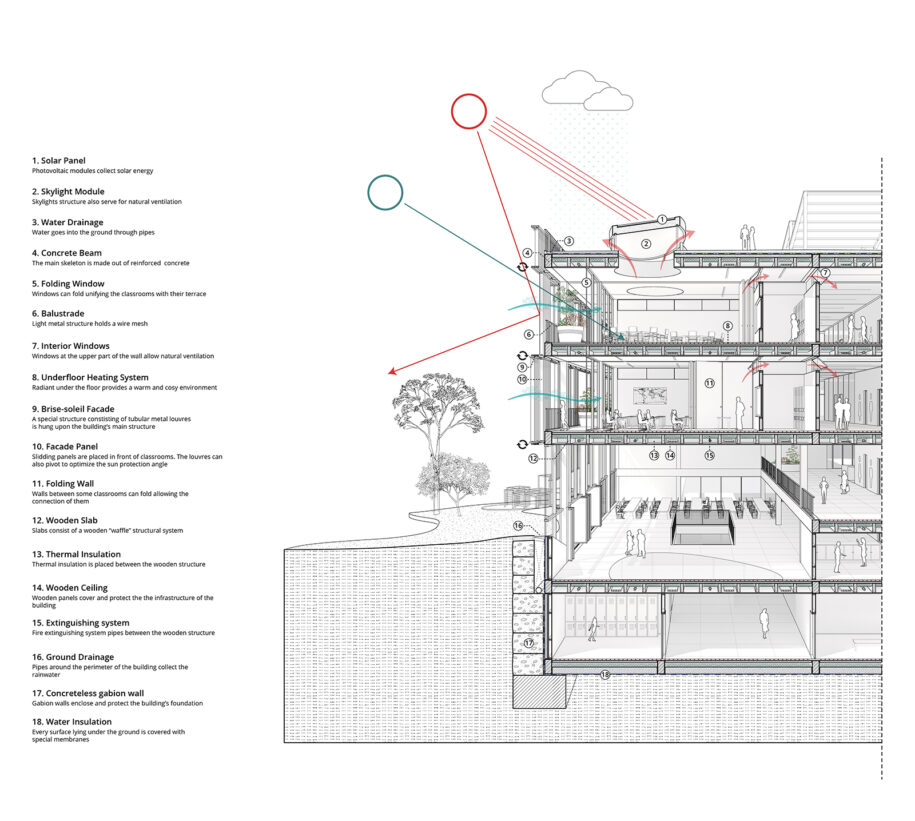 The school intends to facilitate and encourage alternative, flexible education. 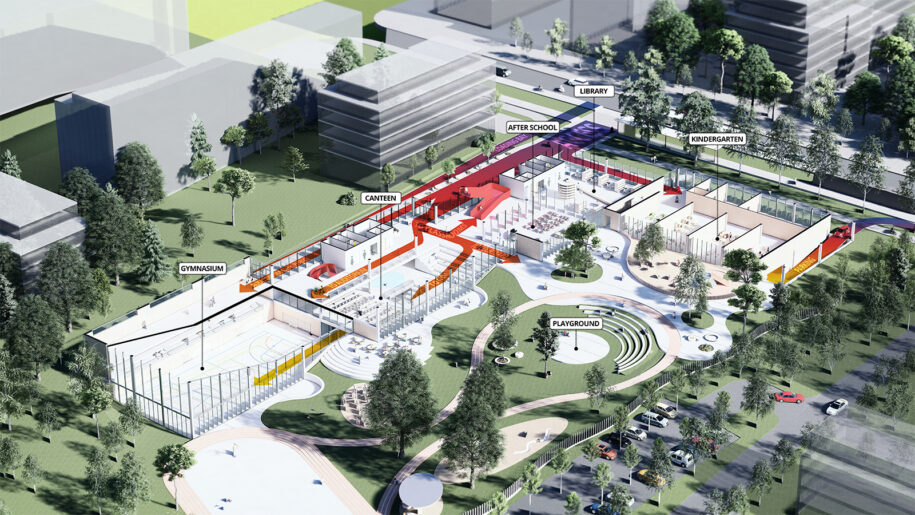 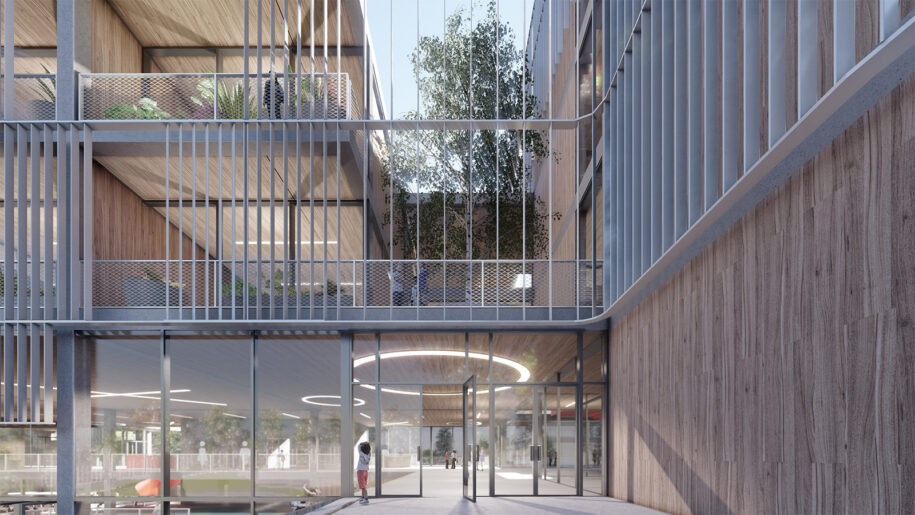 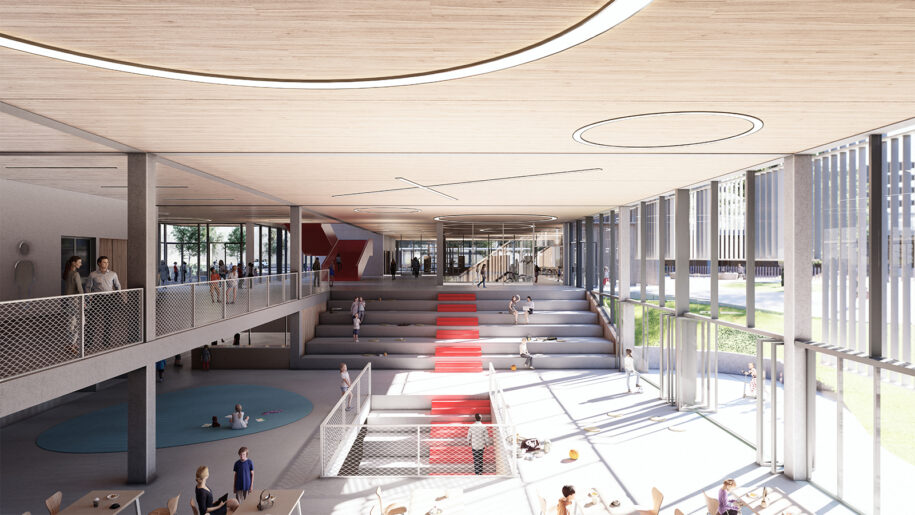 For this purpose indoors and outdoors areas are combined through the school grounds. The building is not only fully tied to the outdoors but built around it taking an L general shape around the central large courtyard. The rooftops of the cascading volumetry accommodate playgrounds, relaxation spaces, areas for learning and sport. The school is immersed in greenery extending from the rooftops and the terraces dominating the eastern facade into the courtyard. 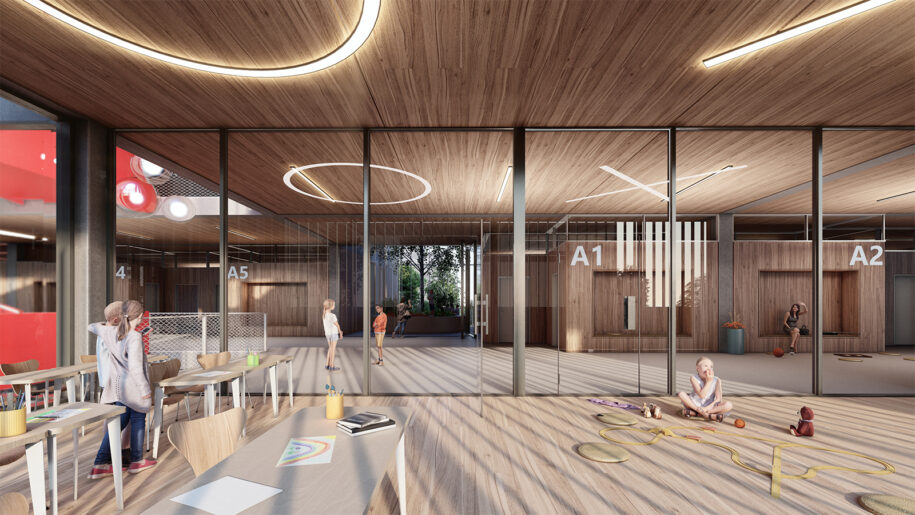 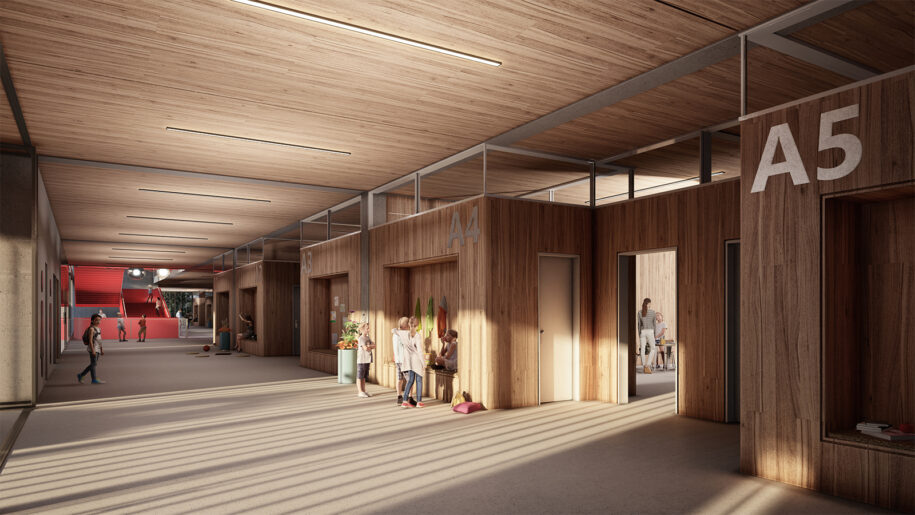 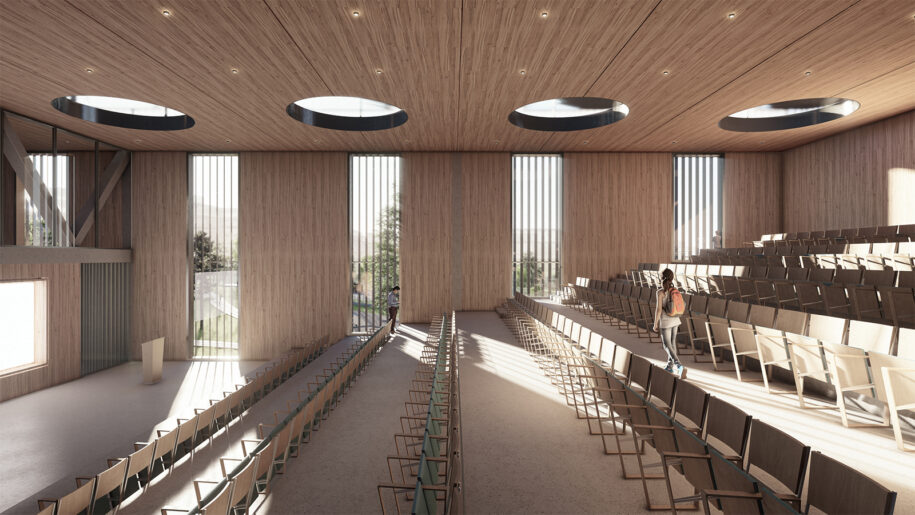 The building is composed through the playful aggregation of four cascading volumes. The disposition of each follows the topography generating a relaxed image that follows the landscapes guidelines. Sun control is provided through an external layer of vertical louvres. Manually adjustable at the classrooms the same element is used at the west facade to provide privacy from the adjacent residential projects. The ground floor is kept unobstructed to become an inviting transparent element which transmits the open nature of the school and bringing a horizontal dimension to the composition. 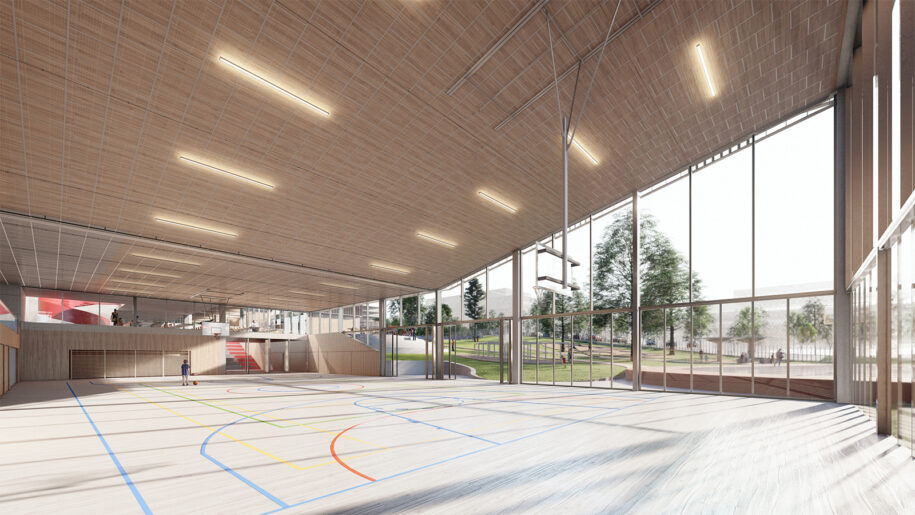 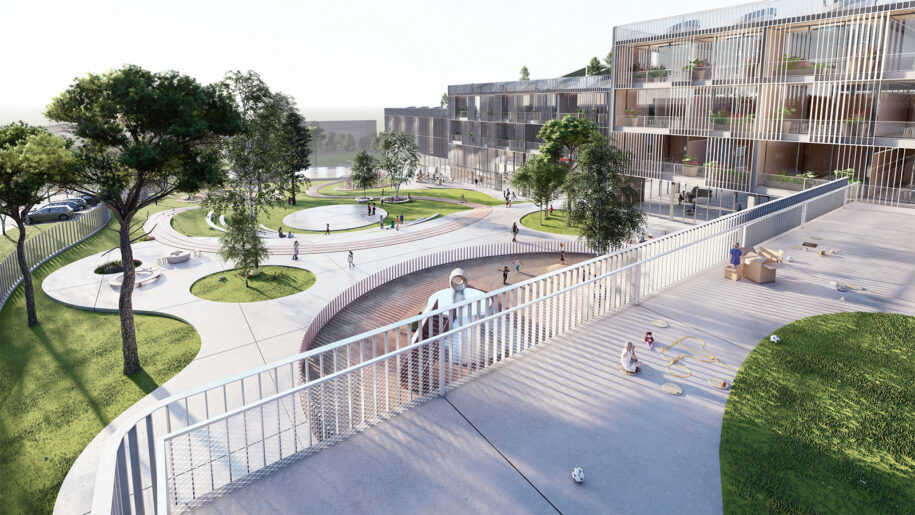 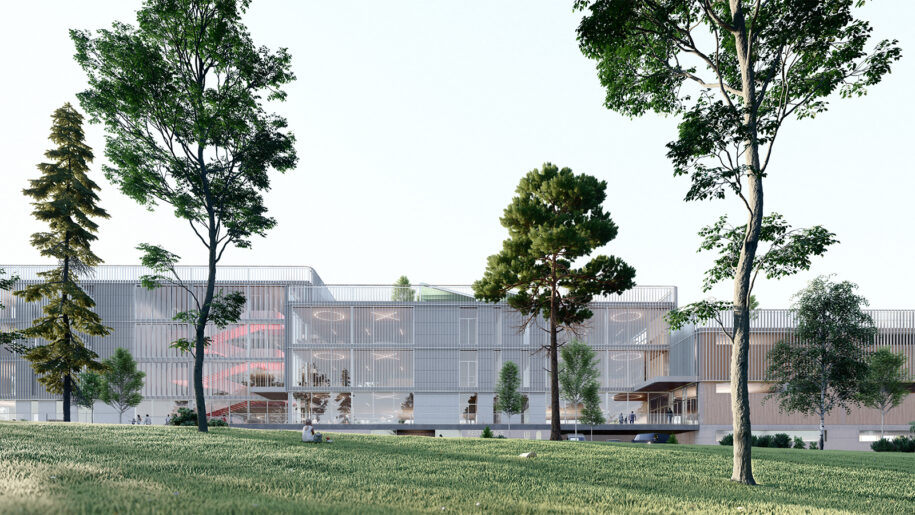 Warm durable materials with a pre-eminent presence of laminated wood as the main structural material are used throughout the school. The structural and construction systems are environmentally friendly and of a low carbon footprint. 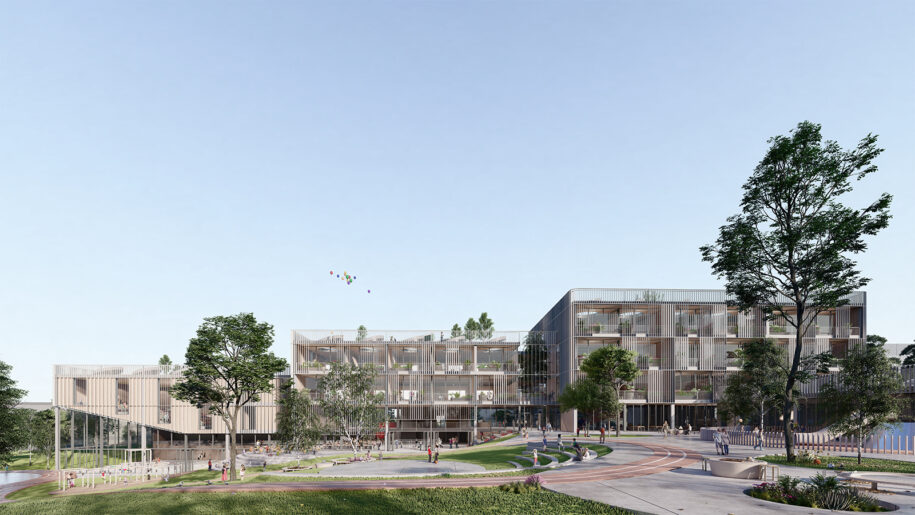 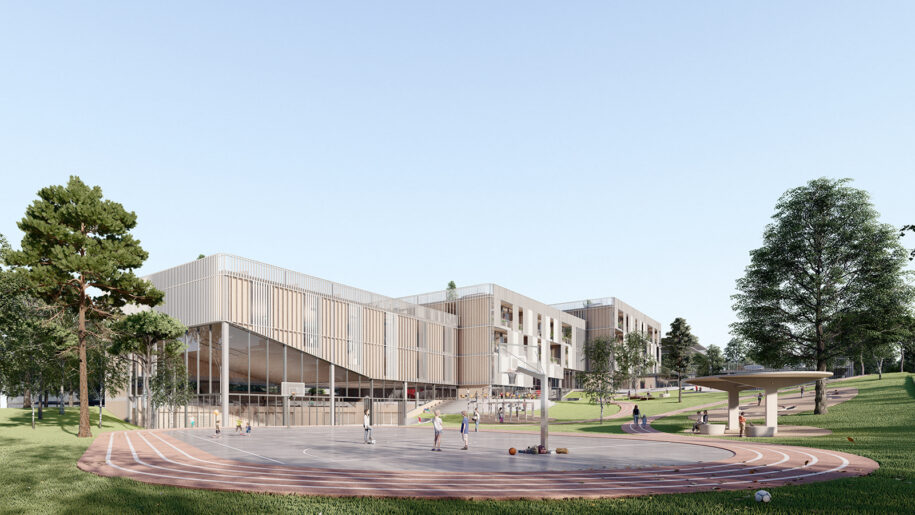