Winner of the 2016 American Architecture Prizes, the Mirage project by Kois Associated Architects is a poetic effort to reconcile nature and architecture establishing a continuous dialogue between the building and the surrounding landscape in an effort to highlight how less is actually more.

It concerns an island house with a unique design intention. A residence fused with its surroundings, which not only documents and highlights the region’s identity, but also acts as an illusion of the natural environment, an almost invisible construction camouflaged under a water tank.

It is an experimental intervention on the island landscape, with the pure intention of leaving it almost intact, due to an implemented design strategy and a targeted selection of building materials. Also known as the ‘Island of Madonna’, Tinos has a rich theological history and is the third largest island of the Cyclades complex. Within its rocky landscape more than 40 villages and more than a thousand churches can be found, lit under the Greek sky, scattered across the hilltops like fragments of ancient ruins. The scenery is lined by thousands of kilometers of drystone walls, as if embroidered on the rocks, which complete a unique landscape.

The residence is situated on a steep sloped rocky plot overlooking the Aegean Sea. The design’s main essential was not only to integrate the volume of the house into the rocky island landscape, but mainly to investigate the boundaries between built and natural environment, always keeping in mind the basic Cycladic architecture elements of functionality and simplicity, not nevertheless neglecting aesthetics.

The house consists of a single-level structure. A linear wall, resembling the characteristic drystone walls of the island, runs from the outside to the inside of the house and separates the public from the private section of the house, also acting as a boundary of the territory. On top of the residence overlays a rimless infinity pool, merging with the seascape and the Greek sky, thus providing an illusion inspired by the optical phenomenon of “mirage”.

The presence of the house is revealed only through the mirror-effect surface of the pool, keeping the rest of the property camouflaged. 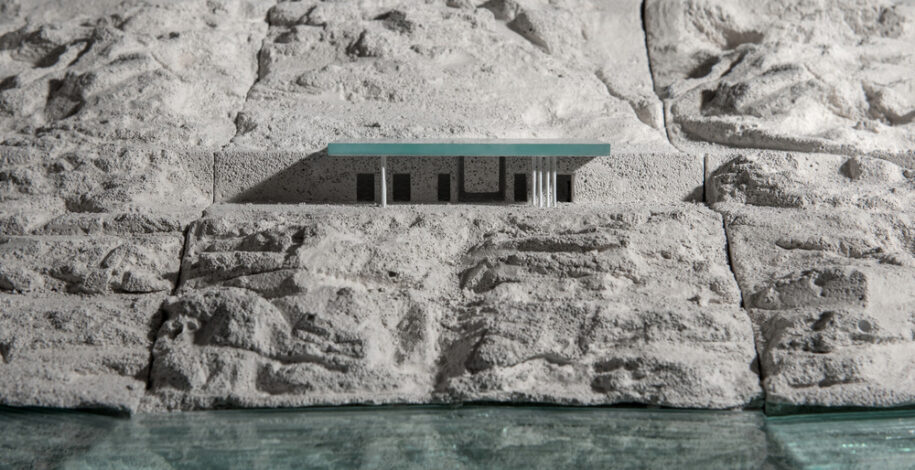 Reinforced rammed earth walls become the bearing structure of the house. Twelve concrete columns are positioned at the living room, to support the pool while at the same time making it appear as an independent floating volume. The structural walls are constructed by a reinforced earth and cement mixture, poured and compacted into a mold. The inner walls have a white screed cement finish, allowing the metamorphosis of this ‘cave’ house through the reflection of light.

Sliding glasses blur the limiting boundaries between inside and outside, inviting light and movement and transforming the living experience. Controlled with a turnable corner system, the glass panels can be stored in a designated area, thus transforming the living room into an open-air observatory. The pool, acting as a roof, provides thermal insulation and protection from solar radiation and heat transmittance. Cool sea breezes penetrate the house pushing warm air out, thus achieving natural ventilation.

This project’s essential aim is to illustrate the Greek Cycladic aura and its magic.

All materials -most of them extracted from local sources- were strategically used to make the house ‘disappear’ into the existing topography. This ‘cave’ like house establishes a continuous dialogue with the landscape, in an effort to highlight how less is actually more. As Stelios Kois says: “Reflecting nature is the only way to integrate in it”.

Kois Associated Architects was founded in Athens in 2007 by architect Stelios Kois. The office deals with a range of projects on several different fields of design;  spanning from smaller to larger scale projects. The design ethos of the collaboration is the synchronized engagement in practice and research that leads to the evaluation and generation of new solutions. Research topics are drawn from natural formal and social sciences in an attempt to form an interdisciplinary network of information that will inform the decision making process. Kois Associated Architects works in a continuous workshop spirit with a multidisciplinary team of architects, engineers, graphic artists and town planners from different cultural backgrounds. The practice’s view is that only through diversity and antithesis true innovative solution emerges and manifests its self.

Apartment in Kolonaki by People architects | Furniture by Deloudis

by ELPIDA ROIDOUArchisearchhttps://www.archisearch.gr/wp-content/uploads/kolonaki-apartment-people-deloudis-cover-370x700.jpg
SHARE THIS PAGE
WITH YOUR FRIENDS