Plano Humano Architects took over the refurbishment of an entire building in the heart of Lisbon, adapting a sustainable approach in the design of the facade, dressing it with wood panels.

Rebuild to revive. Renew to continue.

To give a new life to an existing building, within its story  and excellent location.

The pre-existence was a state service, the tourism general offices.

The project intended to provide the building with features of a current architecture. New materials, new spaces, new connections, thus creating new experiences for the new established use, to inhabit.

Inhabiting the city center. Take advantage of the centrality, with the required privacy and retreat. Living in larger and connected spaces, full of light.

We opened the building to the outer space. We extend it on balconies that increase the space of habitation, which thus also happens outdoors, in contact with the open air, a relic in the center of the city. Interior and exterior are in constant dialogue.

We worked the materiality according to its characteristics of comfort, robustness and longevity. The minimalist interior contrasts while connects with the powerful exterior in thermomodified wood.

A disused building gained a new life, and give new lives through its 15 apartments and 2 shops,connected by common leisure spaces, such as gardens, a gym and a spa.

Wood is the hallmark of the building. Traditional and noble material, allied to the current technology, in the cladding of facades that will always be dynamic, different for each moment of the day and for each appartment.

The facade is dynamic, it has constant movement, which makes it a mutable, almost living building, that transcends its inner life to the exterior. 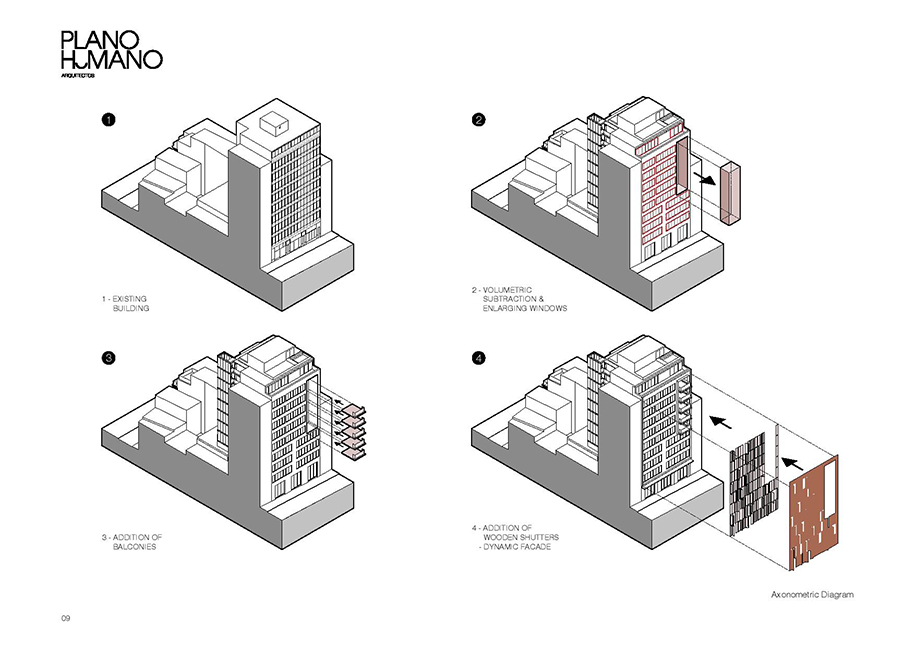 The wood is applied in automated shutters, that while privatizing the interior spaces, increase the building´s energy efficiency. They limit or allow the interior solar incidence, depending if it is summer or winter, what in a mediterranean city like Lisbon has a great preponderance in thermal confort.

Helena Vieira trained at Loures Town Hall DGU and worked with the studio Limite Aedificandi, Coreplan and GMCS. Pedro Ferreira trained at the studio of João and Luísa Sequeira, and whilst there he was awarded in 2007 the Ares Competition prize promoted by UIA, and in 2008 What If New York City. He worked for the Vasco Santos Pinheiro practice and for Limite Aedificandi.

Their projects include the rehabilitation of the head office building of C.N.E. – Catholic Scout Association of Portugal in Lisbon; the Scout Camp in Ferreira do Zêzere; Our Lady of Fátima Chapel in Idanha-a-Nova ;and the Lisbon Wood building in Lisbon.

They have projects with diversified programmes which are marked by the exploration of different materialities; wood and natural materials are a constant that characterises their production. Their works have been published in national and international magazines and have also received several awards such as: The International Architecture Award  2019, Architizer A+ Award 2019 and 2018, Archizinc Trophy 2018, The American Architecture Prize 2017.

See more works through the lens of João Morgado here!

by MELINA ARVANITI-POLLATOUArchisearchhttps://www.archisearch.gr/wp-content/uploads/Studio-Zhu-Pei-Shou-County-Culture-Art-Center2-370x700.jpg
SHARE THIS PAGE
WITH YOUR FRIENDS