I AGREE
Archisearch https://www.archisearch.gr/wp-content/uploads/old-site/phoenix-observation-tower-by-big-ss41.jpg
BIG is commissioned by Novawest to design a 420 ft tall mixed-use observation tower to serve as a symbol for the city of Phoenix, Arizona.

Located in downtown Phoenix, the 70,000 sf Observation Tower shall add a significant structure to the Phoenix skyline from which to enjoy the city’s spectacular views of the surrounding mountain ranges and dramatic sunsets. Phoenix-based developer Novawest, commissioned the team to create a destination event to provide tourists and citizens of Phoenix alike the chance to enjoy the unique features of the Valley of the Sun.

“This is the right place and the right time for a signature project for downtown Phoenix and we knew the design needed to be something extraordinary. BIG has delivered something exceptional, blending form and function in a way that will change the local skyline forever and will give visitors a once-in-a-lifetime experience.” Brian Stowell, Novawest.

The future observation tower is conceived as a tall core of reinforced concrete with an open-air spiral sphere at its top, resembling a metaphorical pinfirmly marking a location on a map. The spiraling sphere contains flexible exhibition, retail and recreational spaces which are accessed via three glass elevators that connect the base with the summit and offer panoramic views of the city and the tower’s programs as visitors ascend or descend.
Walking downwards from the top through a continuous spiral promenade, the visitors of the observation tower experience all of the building’s programs in a constant motion, while enjoying dynamic 360 degree views of the city of Phoenix and the Arizonian landscape.

“Like the monsoons, the haboobs and the mountains of the surrounding Arizonian landscape, the Pin becomes a point of reference and a mechanism to set the landscape in motion through the movement of the spectator. Like the Guggenheim museum of New York offers visitors a unique art experience descending around its central void, the motion at the Pin is turned inside-out allowing visitors to contemplate the surrounding city and landscape of Phoenix. Like a heavenly body hovering above the city the Pin will allow visitors to descend from pole to pole in a dynamic three dimensional experience seemingly suspended in midair. “ Bjarke Ingels, Founding Partner, BIG.

The spiral layout combines the different programmatic elements and the circulation into a continuous dynamic twirling space which is proportionedaccording to the movement of the visitors, producing a unique viewing experience of the surroundings. Instead of a constant width, the spiraling promenade starts from zero at the point of arrival, reaches its maximum width at the middle, and shrinks back to zero at the point of departure.  Separation between the programmatic elements within the sphere happens not through physical vertical barrier-walls, but softly through the slope and the height difference to preserve a total continuity and create a flexible space for exhibitions and events.

Once the visitors reach the middle of the sphere, they can choose to either conclude their journey by taking the elevator back to the ground, or continue to the restaurant levels at the lower hemisphere. The motion resembles a journey through the center of a planet, and a travel from the north to the south pole. 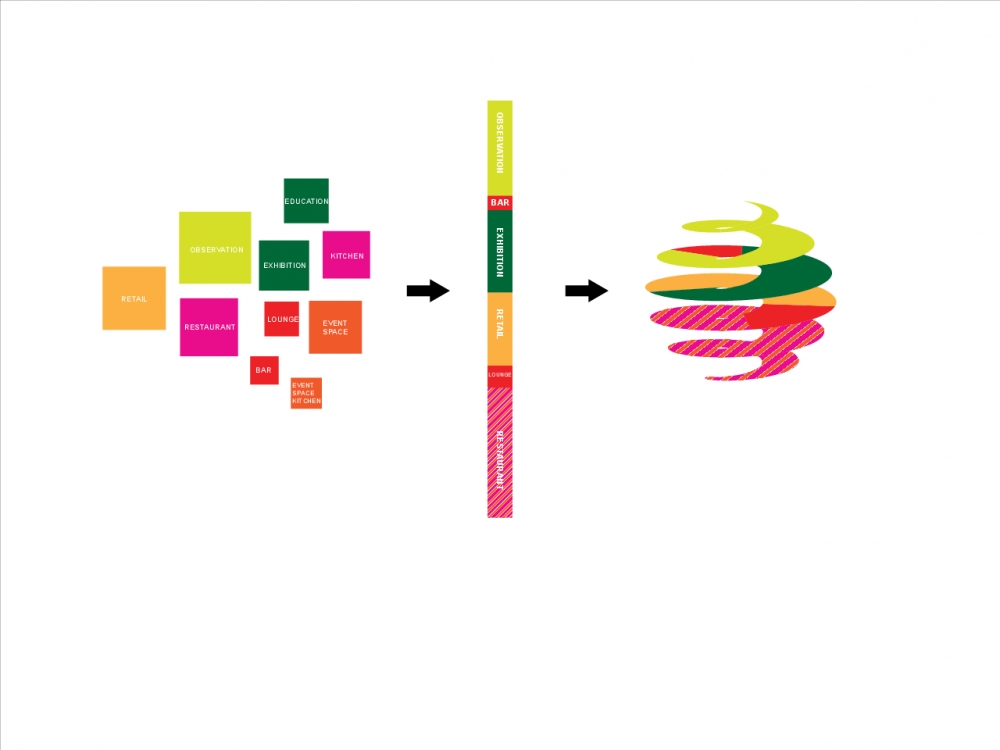 VISUAL BREAKDOWN OF THE PROGRAMS 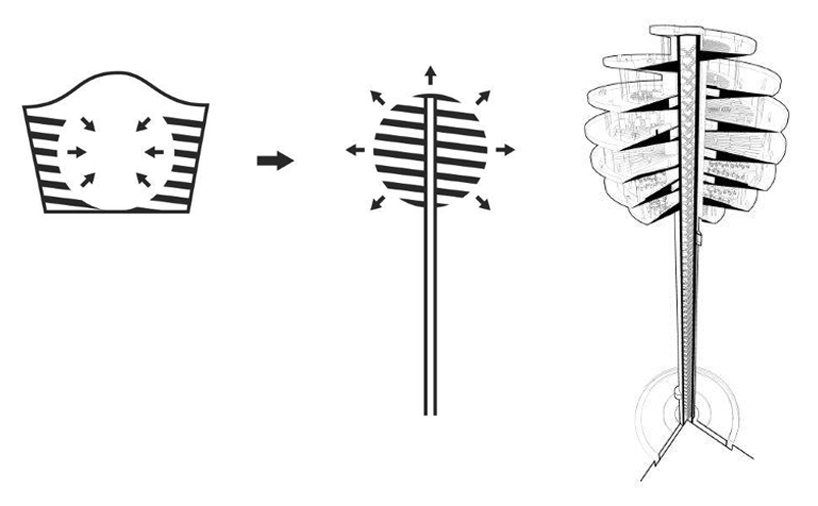 DIAGRAM OF THE SLOPING STRUCTURE 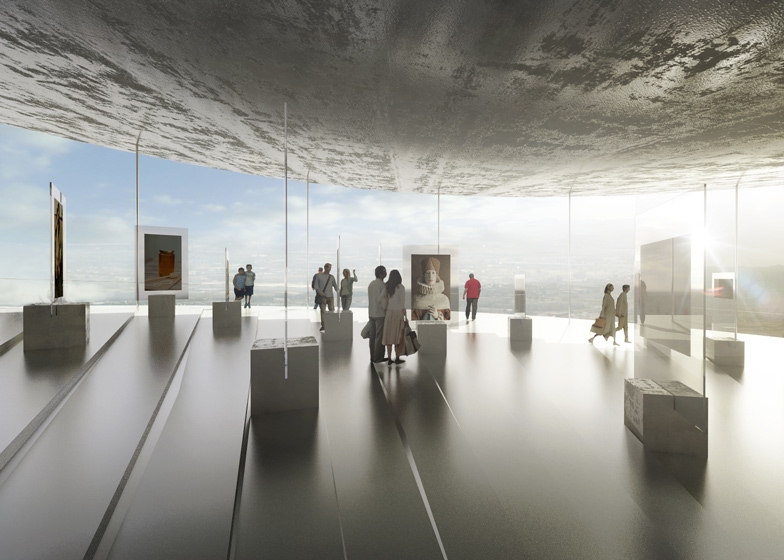 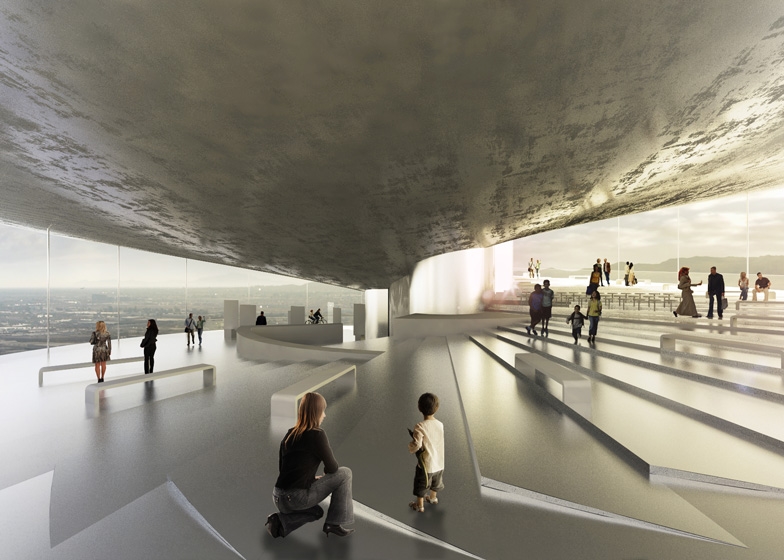 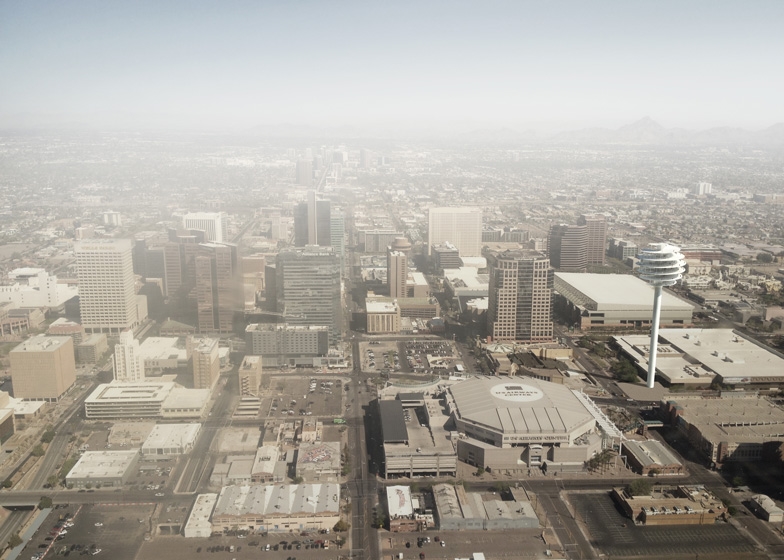 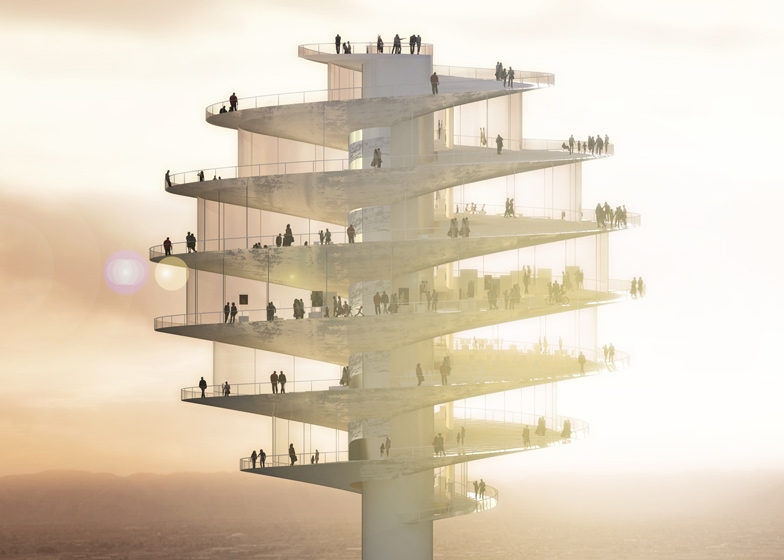 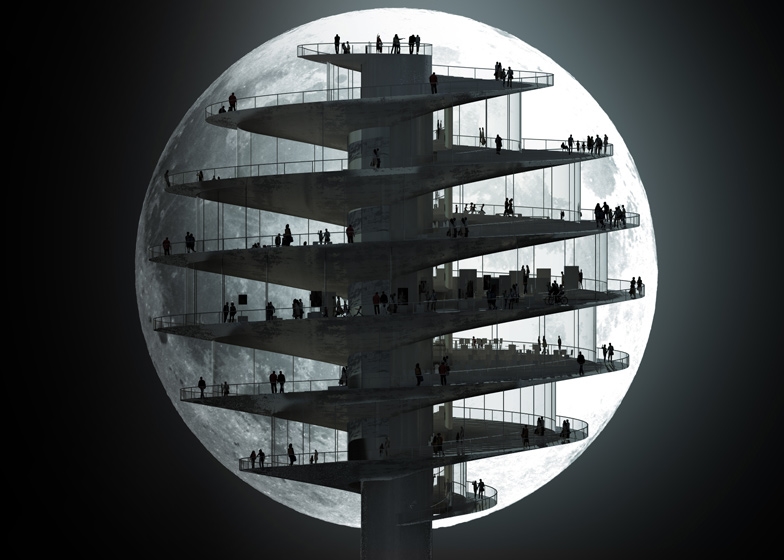 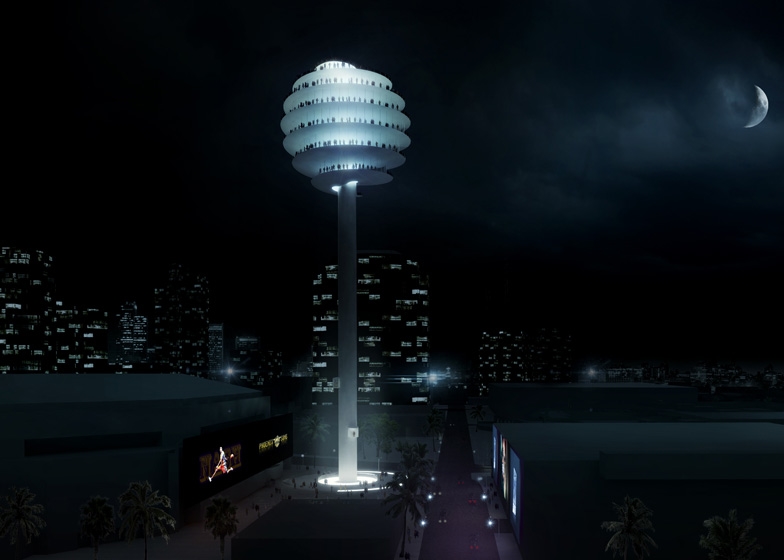 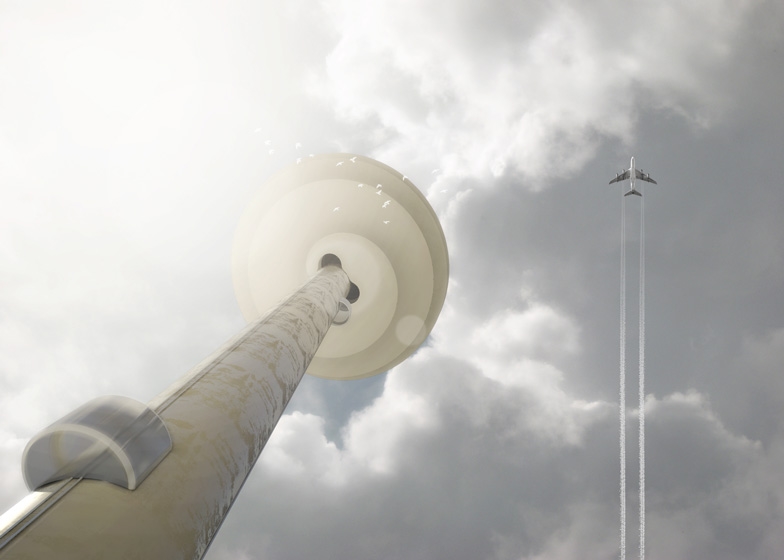