For the 10,000 m2 floor area of the new building in Cornellà de Llobregat (Barcelona), consisting of 85 social dwellings on five floors, a total of 8,300 m2 of zero KM wood from the forests of the Basque Country have been used.

The layout of communicating rooms to eliminate passages and make full use of the floor plan, and the recourse to wood to enable industrialization of the process, improve the quality of the construction and notably cut building deadlines and reduce CO2 emissions are the most notable aspects of this new social housing block by Barcelona practice Peris+Toral Arquitectes. 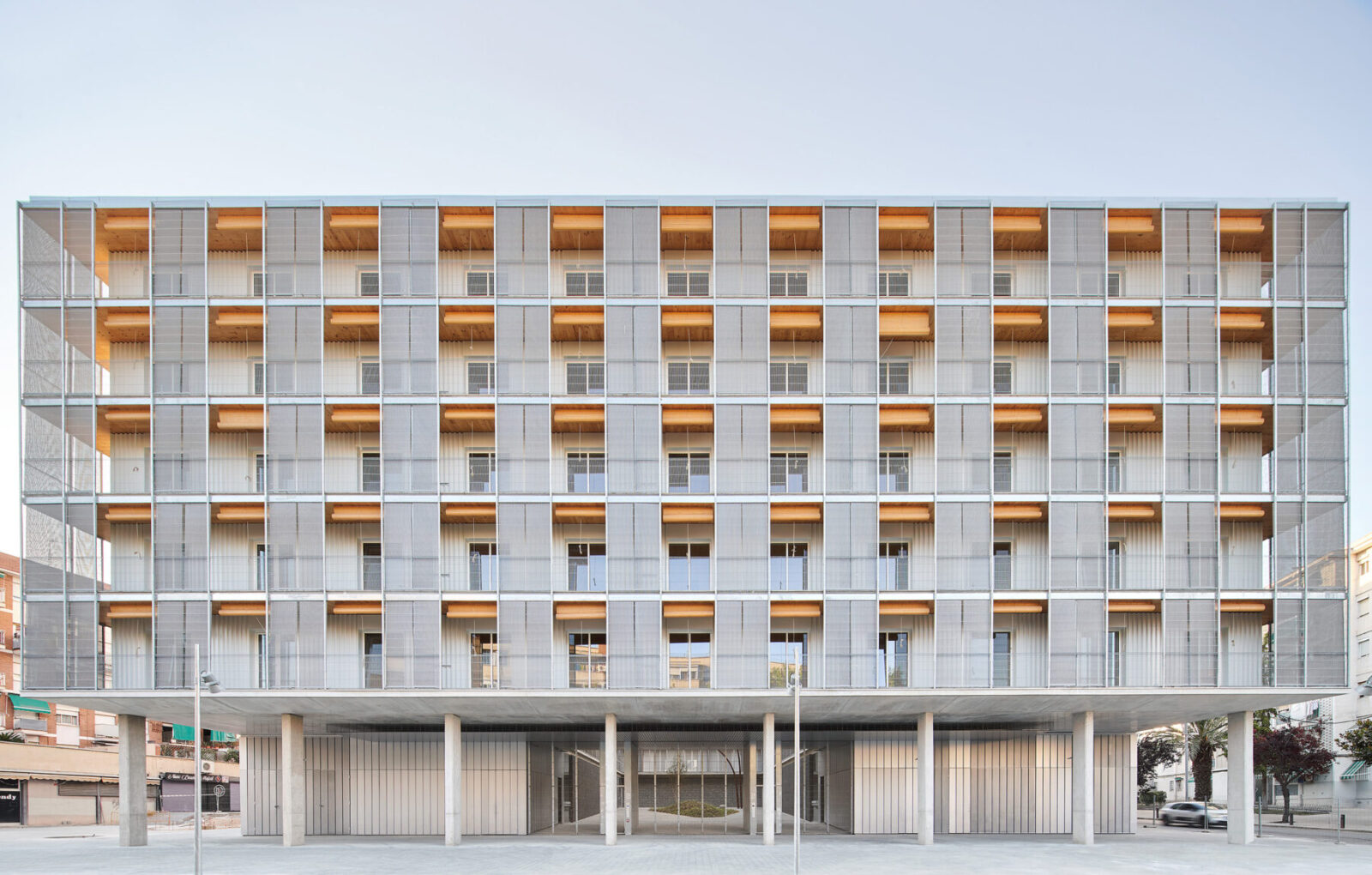 In 2017, Barcelona-based Peris+Toral Arquitectes won the ideas competition organized by AMB and promoted by the public body IMPSOL to design a project for 85 social housing units on the site formerly occupied by the iconic Pisa cinema in the Barcelona municipality of Cornellà de Llobregat. It is a freestanding residential building comprising five wood-framed floors supported by a reinforced concrete structure on the ground floor to accommodate shops and public facilities. 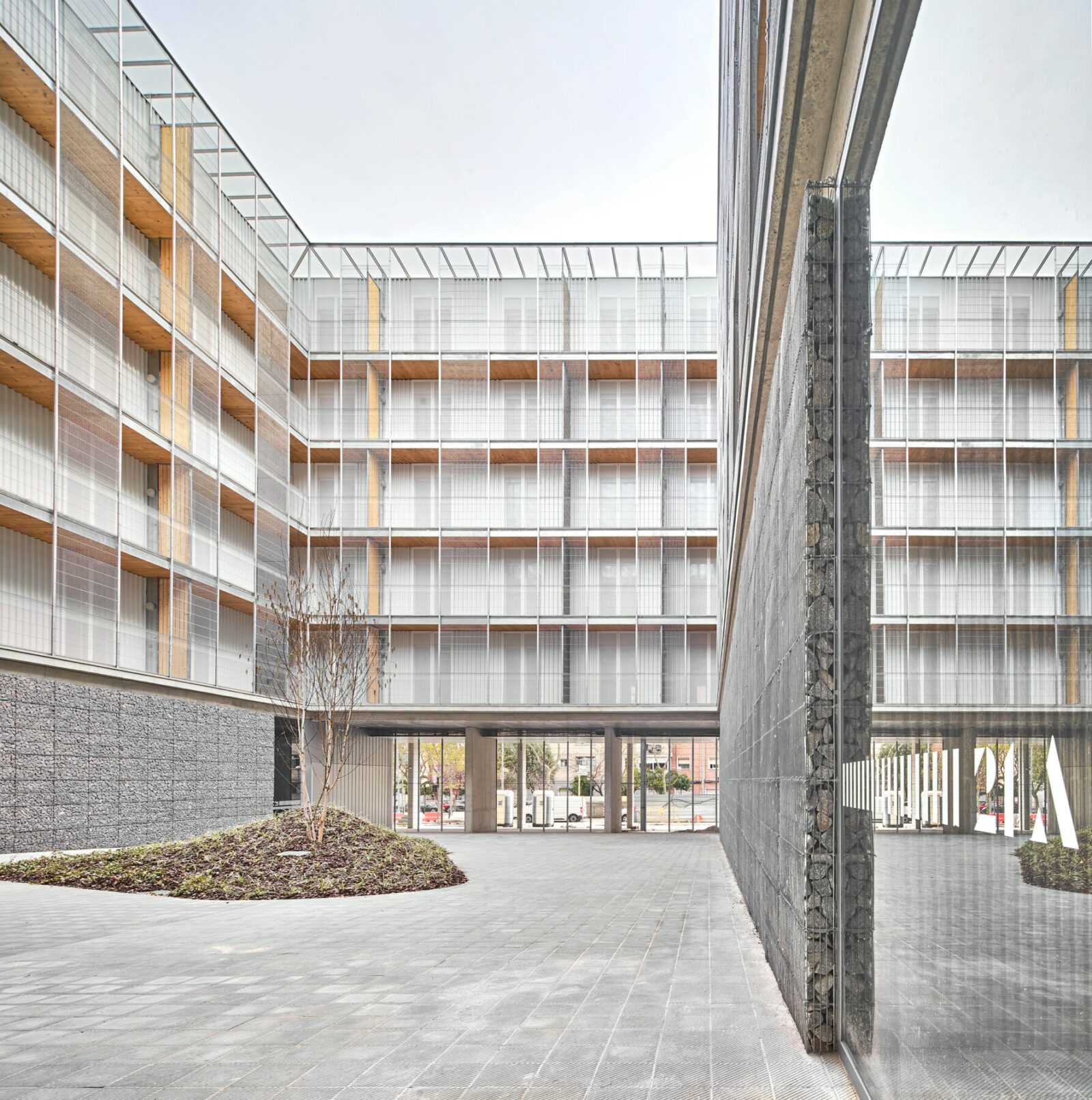 As the key points in their design strategy for this multifamily construction, Peris+Toral Arquitectes decided firstly to create a layout of spaces which, by eliminating both private and communal passages and proposing communicating rooms, makes the most of the floor plan, and, secondly, to make wood the primary construction material. 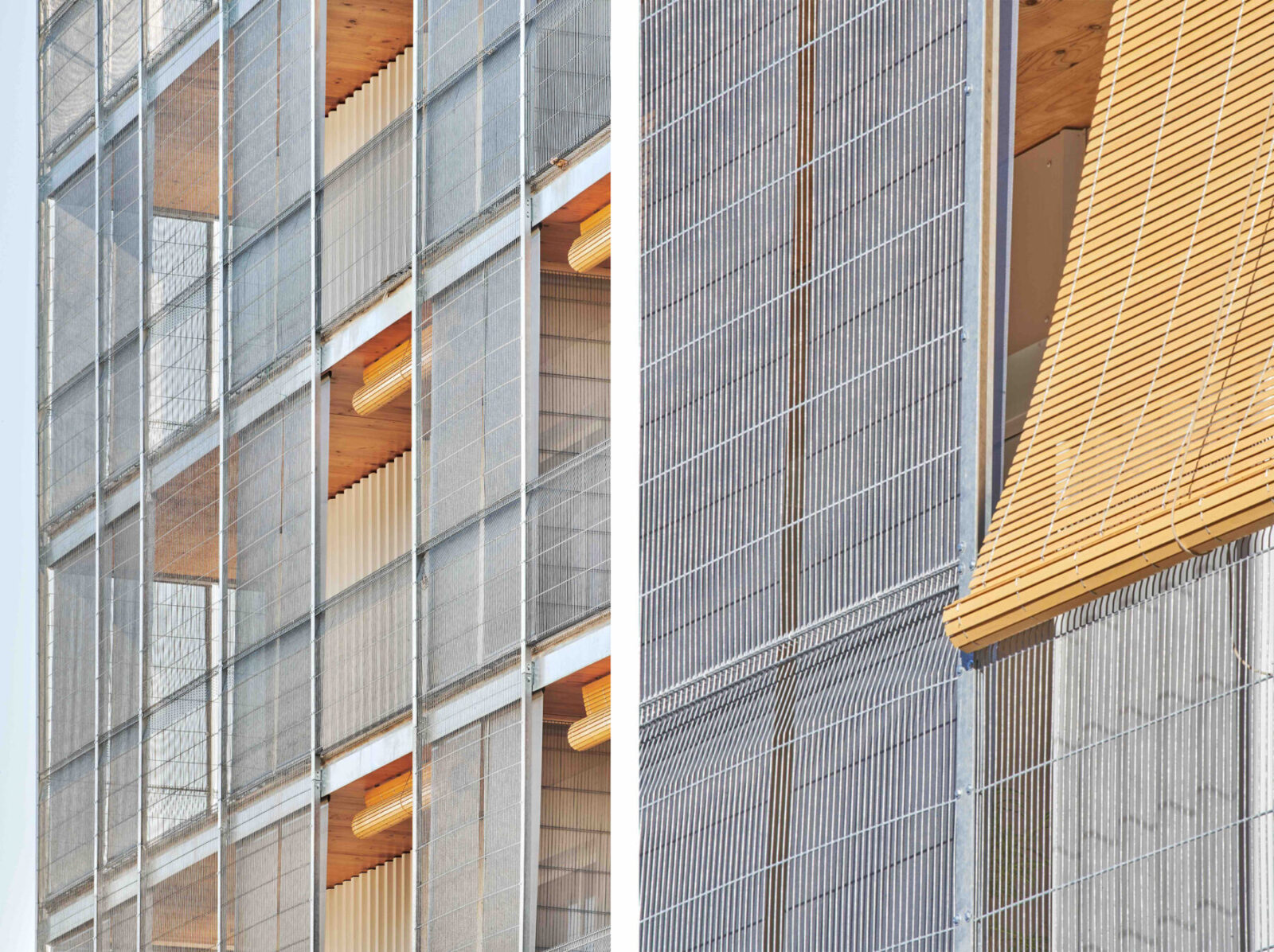 “We chose to work with wood due to the possibilities it offers for industrializing the structure of the building and improving both the quality of construction and the time it takes, and the positive reduction of emissions you get with a totally sustainable material”, explains José Manuel Toral, architect and co-founder with Marta Peris of Peris-Toral Arquitectes, and the architect responsible for the project. 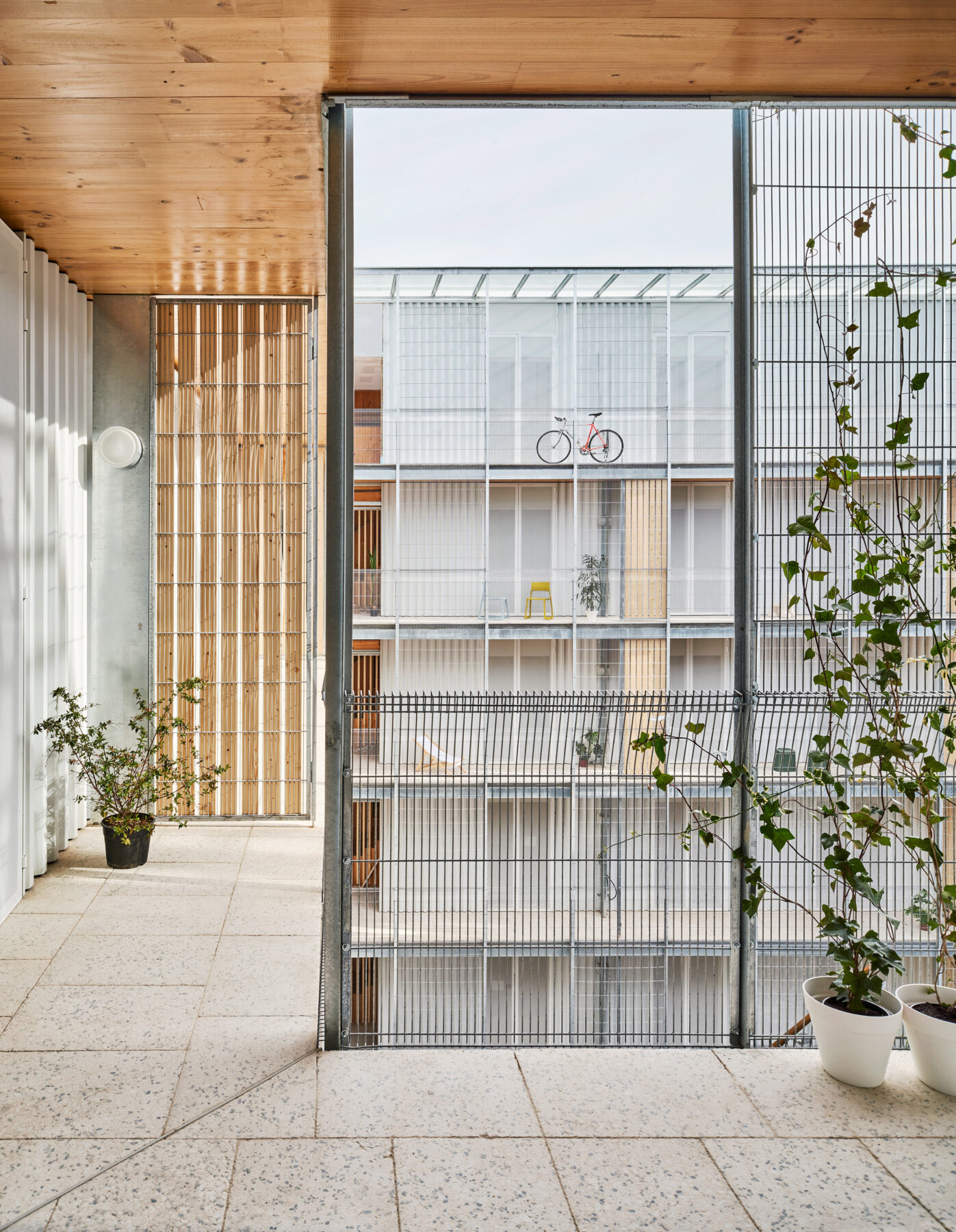 The building is organized around a courtyard that links a sequence of intermediate spaces. 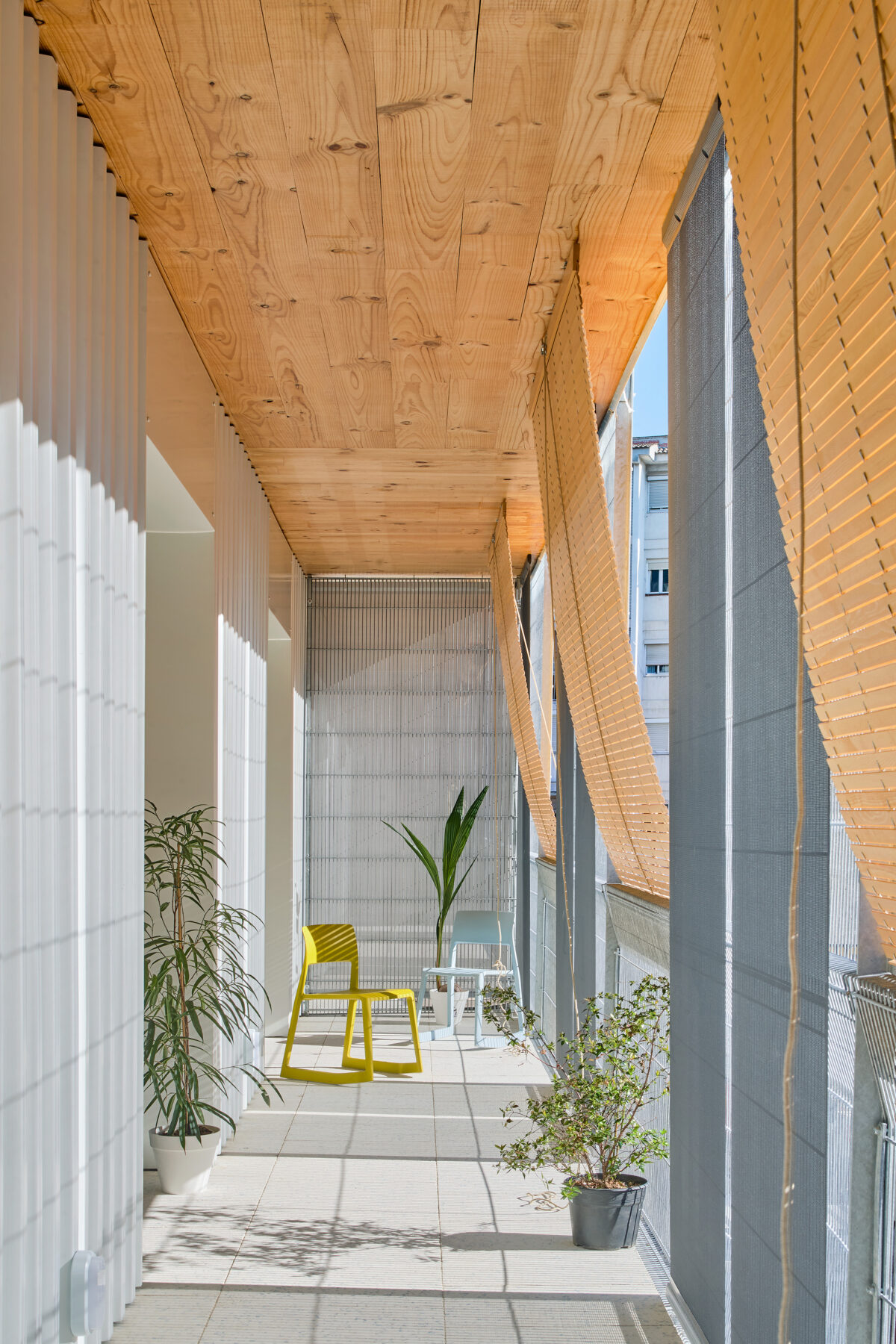 On the ground floor, a portico open to the city anticipates the doorway of the building and filters the relationship between public space and the communal courtyard that acts as a small plaza for the community. Instead of entering each of the building’s hallways directly and independently from the outer façade, the four communication shafts are located in the four corners of the courtyard, so that all the inhabitants come together and meet in the courtyard- plaza. On the typical floor, access to the dwellings is via the private terraces that make up the ring of outdoor spaces overlooking the courtyard. The building’s general floor plan is organized by means of a layout of communicating rooms. There are 114 spaces per floor, 543 in the building, of similar dimensions, that eliminate private and communal passageways to make full use of the surface area. The server spaces are arranged in the central ring while the rest of the rooms, of undifferentiated uses and size, approximate 13 m2, run along the façade, presenting themselves to different forms of occupation. Another terrace in the outer ring completes the spatial sequence, the row of spaces interconnected by large openings, permeable to air, sight and movement. 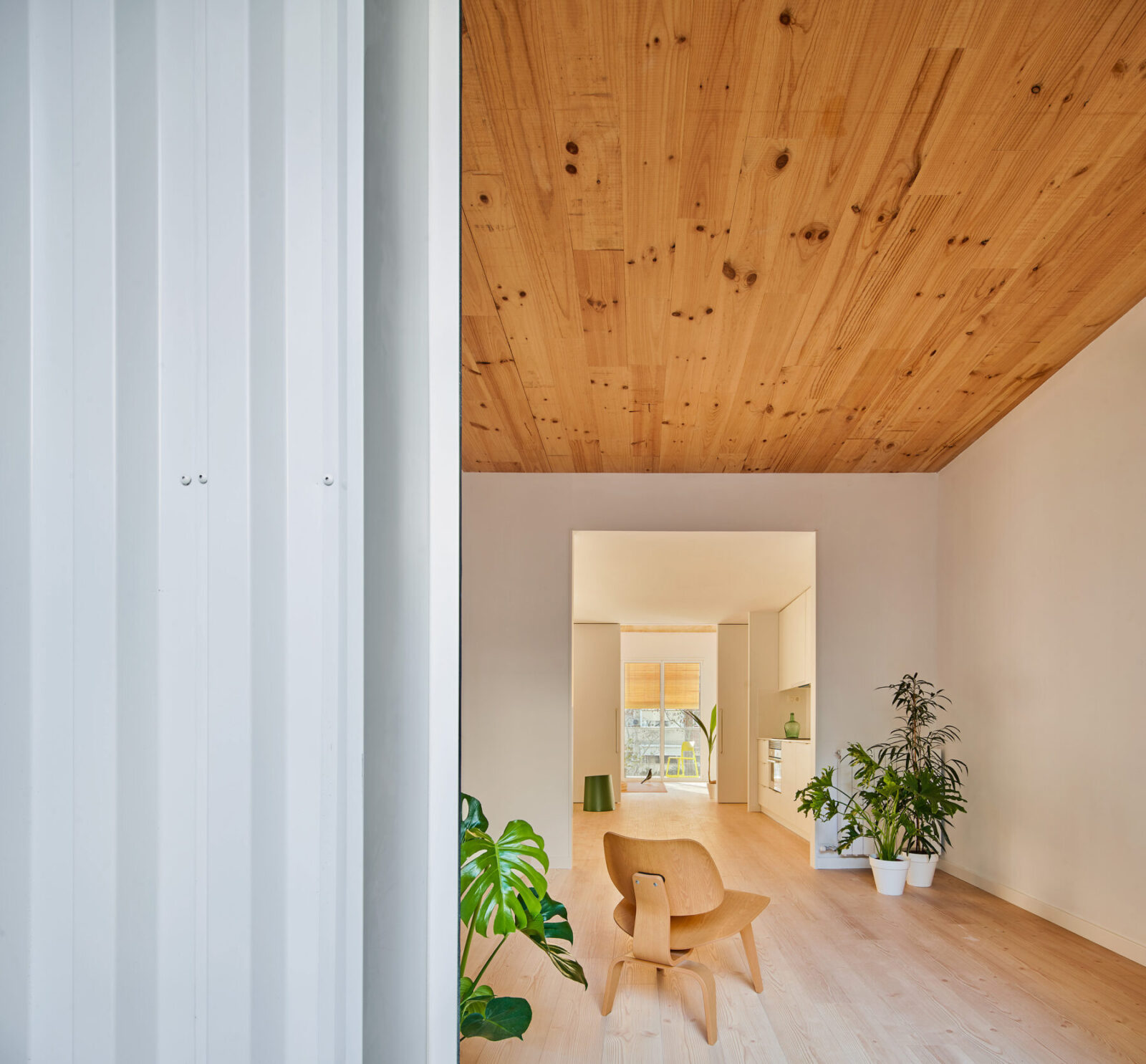 The 85 dwellings are distributed in four groupings, with a total of 18 units per floor. Four or five homes are laid out around each nucleus, so that all typologies have cross ventilation and dual orientation. The homes consist of five or six modules, depending on whether they have two or three bedrooms. 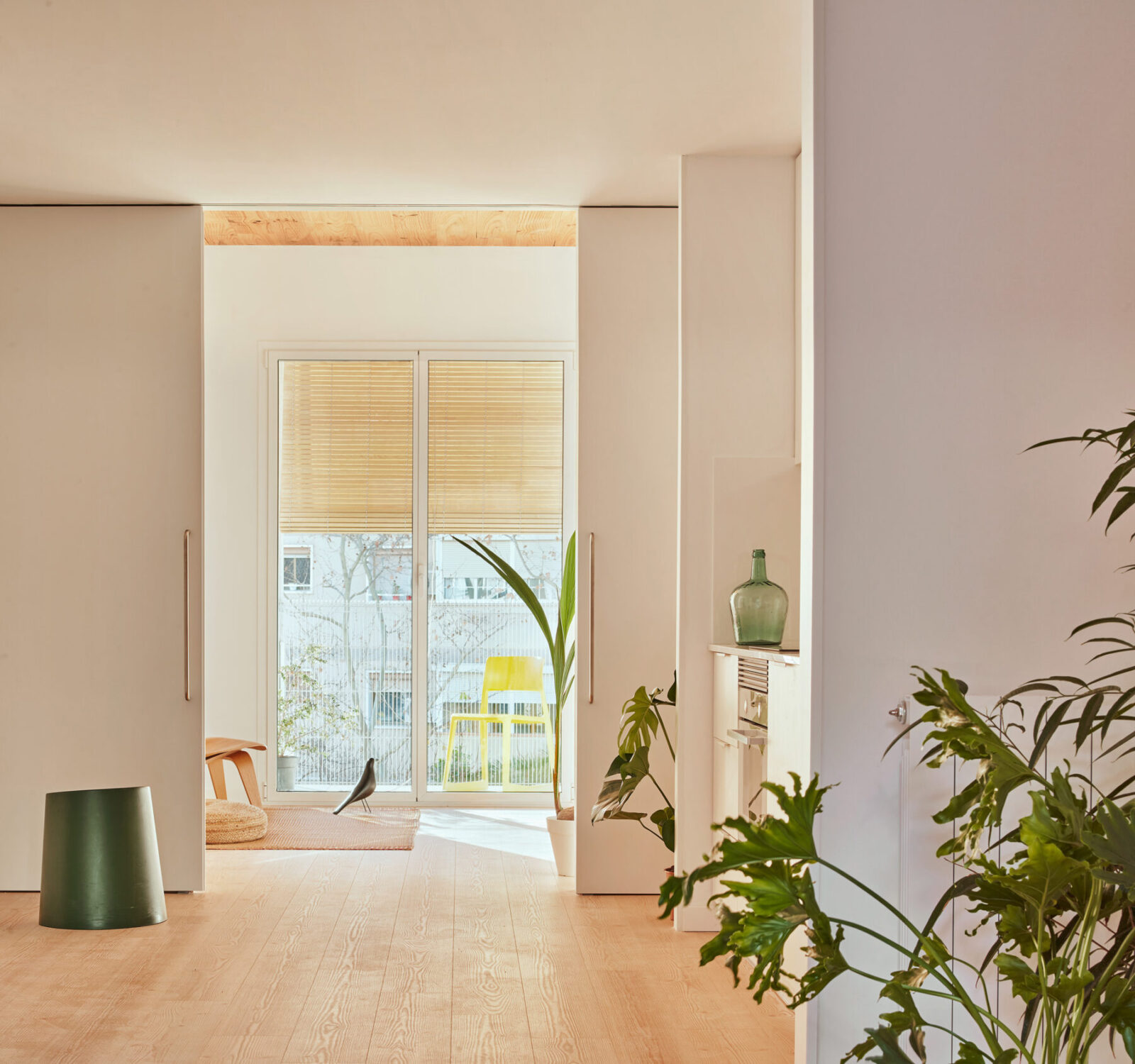 The inclusive, open-plan kitchen is located in the central room, acting as a distributor that replaces passages, while making domestic work visible and avoiding fixed gender roles. 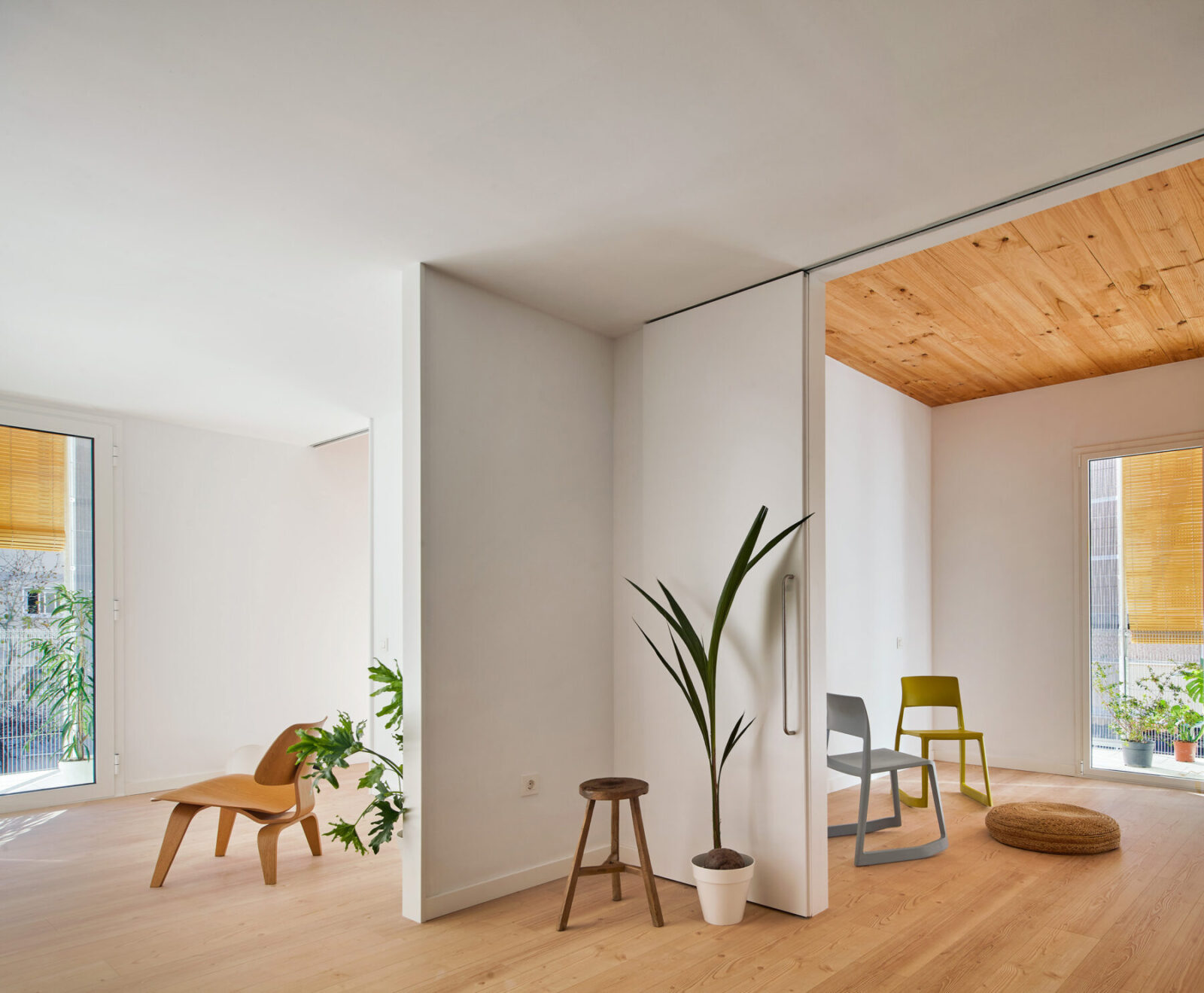 The size of the rooms, in addition to offering flexibility based on ambiguity of use and functional indeterminacy, allows an optimal structural space for the wooden structure. As this is social housing, to ensure economic viability the volume of wood required has been optimised to 0.24 m3 per square metre of built area. 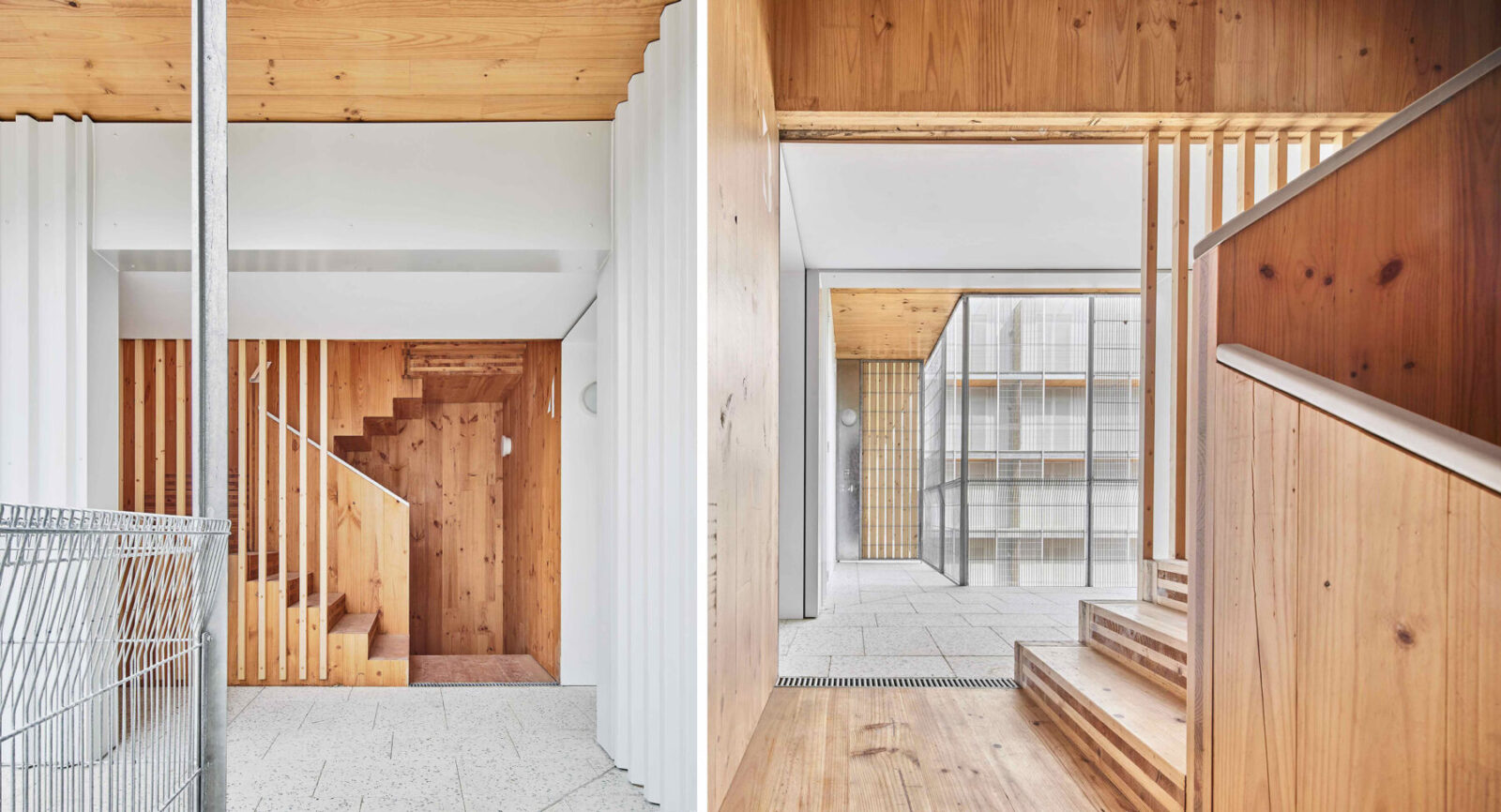 From their Barcelona base, Peris+Toral Arquitectes enhance their practice with ongoing research in the fields of collective public housing and urban space, with a line of thought that places the individual at the centre of action and makes the architect a social agent. Marta Peris and José Toral propose settings into which the user then steps to live and aspire to rethink program standards to respond to the ways of living that society needs at any given moment. 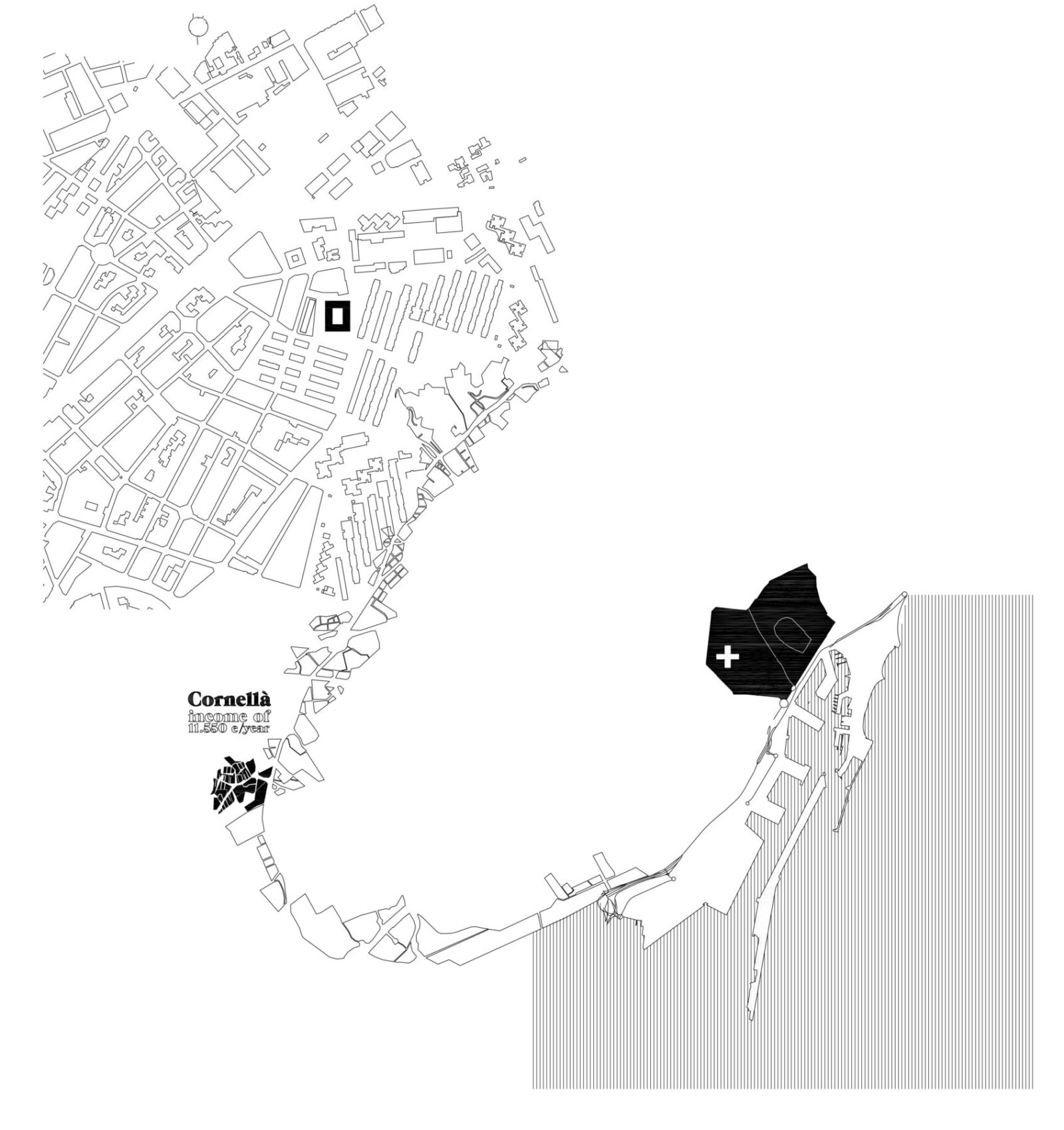 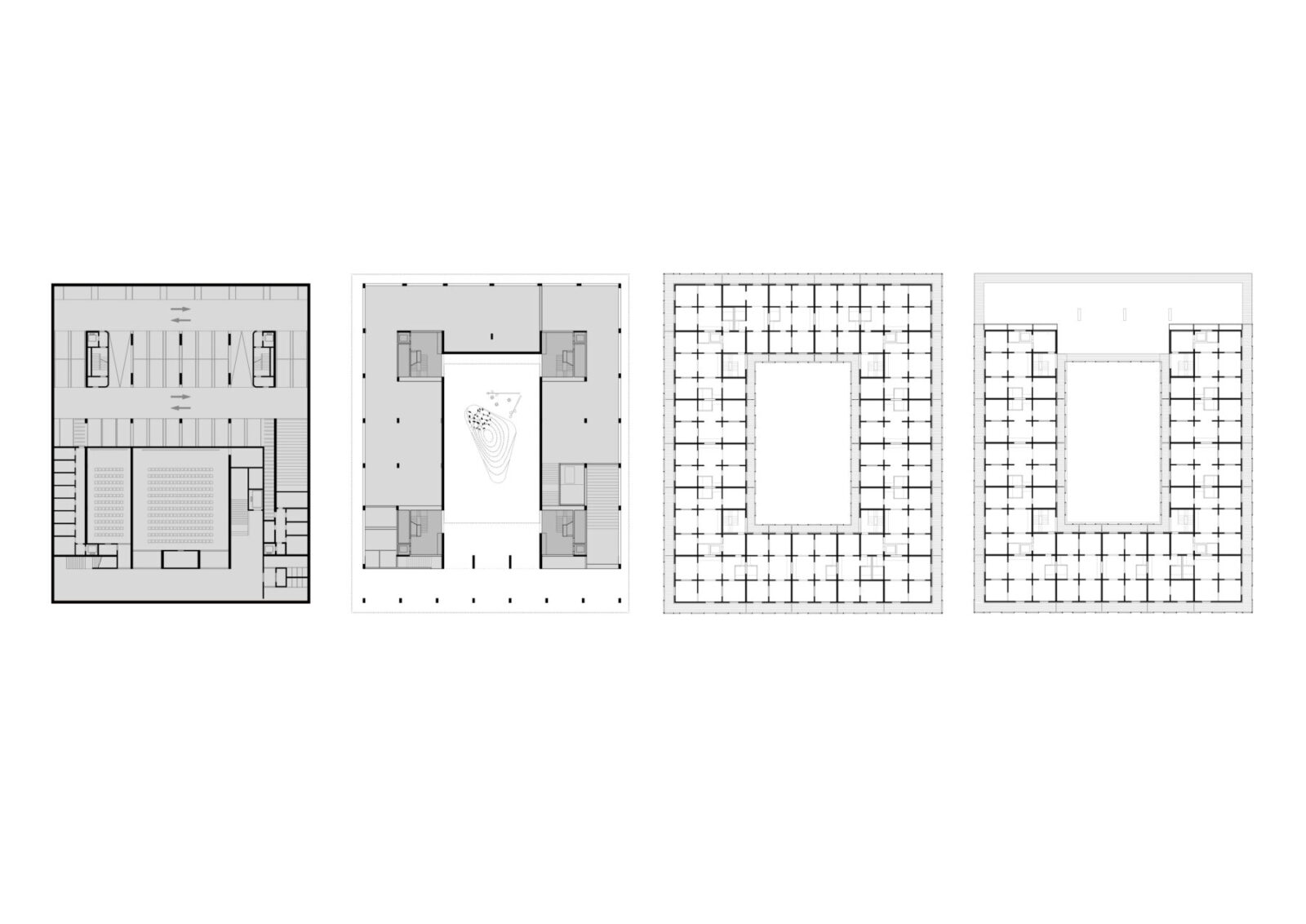 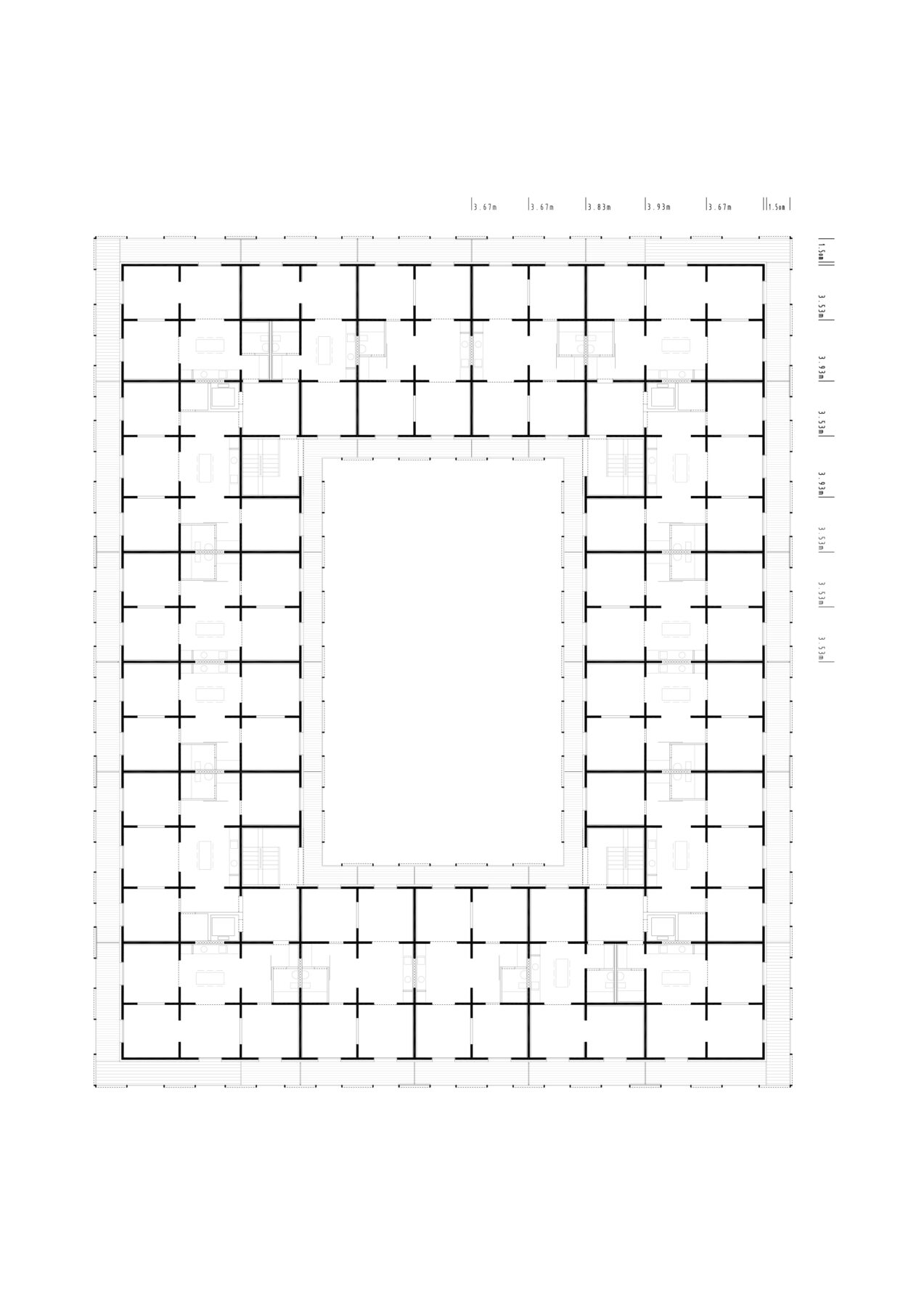 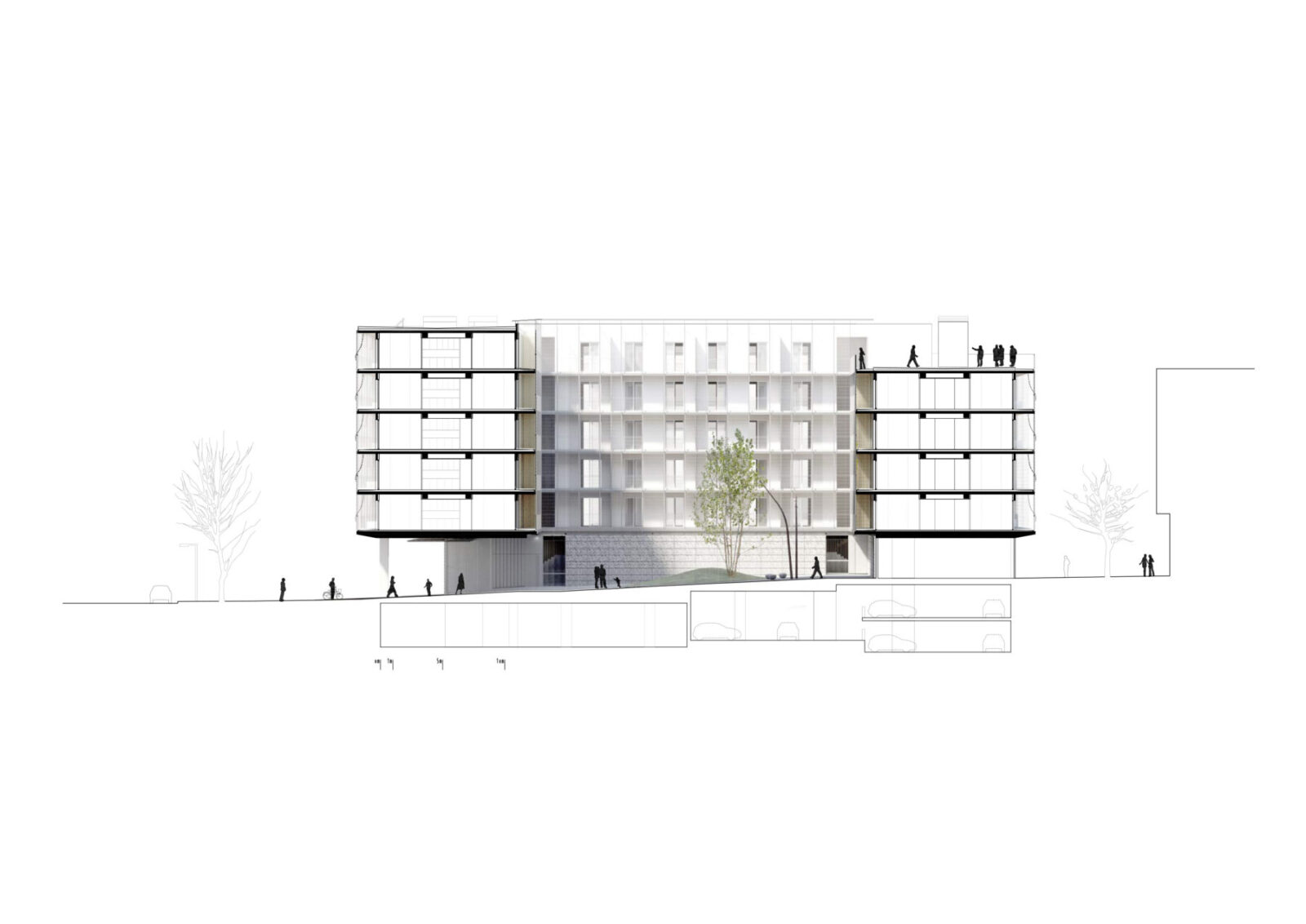 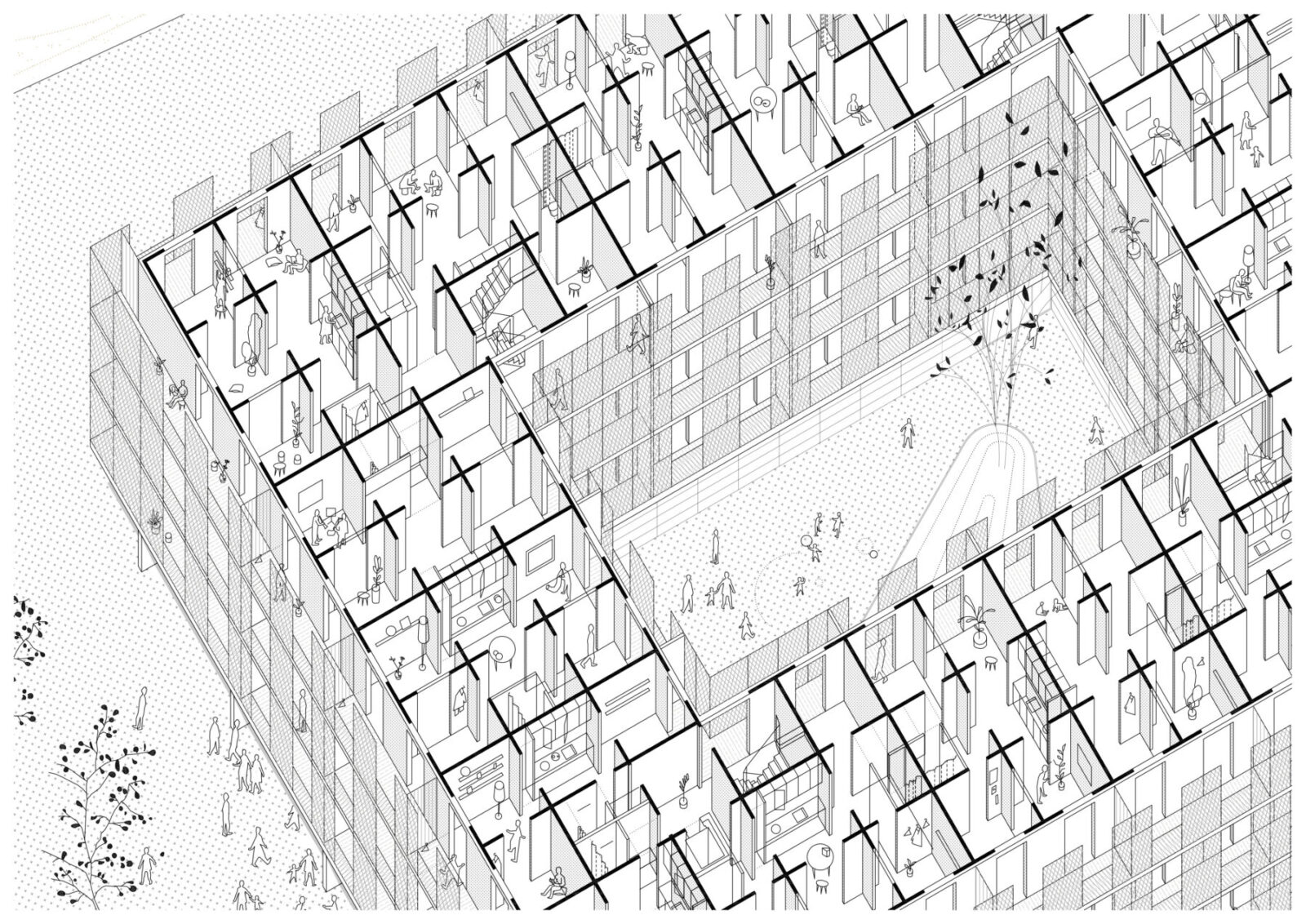