I AGREE
Archisearch https://www.archisearch.gr/wp-content/uploads/old-site/bridging-cultures-in-a-global-world-1.jpg
“Doing architecture is listening.” Some of the greatest architects of our time – from Peter Zumthor to Jean Nouvel and Diébédo Francis Kéré – here share their inspirational thoughts on what it is that makes global architecture work.
Swiss architect Peter Zumthor (b. 1943) always has a certain “feeling for the space”, which enables him to react as an architect. This he also attributes to having background knowledge of the place, which is easier in our modern, global world. The real challenge is to understand the local people and their subtext.
“I’m a contextual architect, but for me the context isn’t only the site.” French architect Jean Nouvel (b. 1945) considers architecture to be part of a wider historical and cultural context. A building, he feels, always has roots, and a building can’t simply be put anywhere and must always develop according to its context.
Danish architect Louis Becker (b. 1962), who is a Principal Partner at Henning Larsen Architects, feels that the globalization of architecture enables architects to both influence – and be influenced: “The nice thing about a Coca Cola is it’s the same thing all over the world… if you did that in architecture, it would be a disaster.”
“Having the opportunity to see both worlds – or even many worlds – is an incredible source of inspiration,” says Nigerian architect Kunlé Adeyemi (b. 1976), who is inspired by travelling the world and aspires to create projects that “seem like they belong there, and at the same time look like they came out of nowhere.”
Norwegian architect Kjetil Trædal Thorsen (b. 1958), founding partner of Snøhetta, feels that there is a great strength in coming from the outside as an architect, as it enables you to “re-search, re-interpret, re-translate.” Moreover, co-operation is key, which also means involving the locals and using their local material – in this sense, architecture builds bridges.
Architecture is a process made in collaboration with the local people, who should ultimately consider the structure their own, according to Burkina Faso architect Diébédo Francis Kéré (b. 1965): “Architecture starts with people.” In continuation of this, Kéré uses old, local materials to create something new and appealing.
English architect Norman Foster (b. 1935) feels that it is important to use architecture as a tool to address some of the bigger social issues – such as sanitation, water and power – while still respecting the urban structure. The true task is to transform e.g. settlements rather than simply tear them down.
All interviews by Marc-Christoph Wagner, Louisiana Museum of Modern Art.
Produced by: Marc-Christoph Wagner
Edited by: Klaus Elmer
Copyright: Louisiana Channel, Louisiana Museum of  Modern Art, 2016 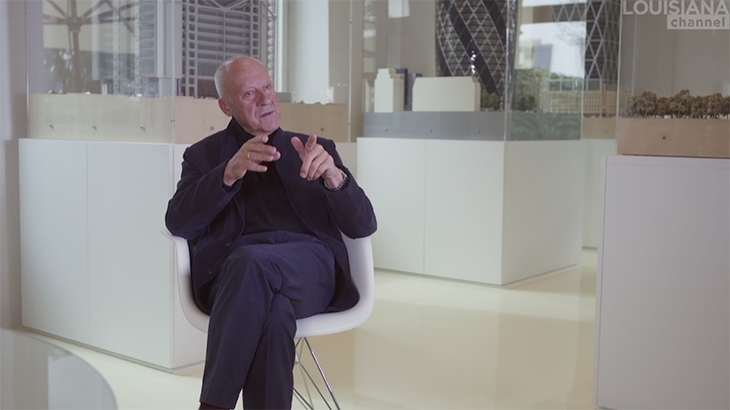 BRIDGING CULTURES IN A GLOBAL WORLD

BRIDGING CULTURES IN A GLOBAL WORLD

7 Architects: Bridging Cultures in a Global World from Louisiana Channel on Vimeo.

by MELINA ARVANITI-POLLATOUArchisearchhttps://www.archisearch.gr/wp-content/uploads/%CE%912-ARCHITECTS-Sifnos-residence-_X2A1136-370x700.jpg
SHARE THIS PAGE
WITH YOUR FRIENDS