Amsterdam-based photographer Ryan Koopmans travelled to Kazakhstan, whose current capital is Astana, where it was moved in 1997 from Almaty, the country’s largest city. Ryan’s images picture the country’s massive effort to make Astana a capital worth to visit and notice, although the results may convey a rather dated aura. Manicured garden swans in front of the Kaz Munai Gas Building in the central business district of Astana were part of a competition for ‘small architectural forms and decorative sculptures’ to celebrate Kazakh national culture. Paddleboats travel alongside the artificially constructed banks of the Ishim River, Astana. The walls of a high-rise construction site in Astana are wrapped in decorative illustrations depicting a pastoral Kazakhstan. View of residential Almaty at the base of the Tien Shan mountain range. A large pipeline transports fresh water from Big Almaty Lake reservoir, through the Tien Shan Mountains into the southern city of Almaty, Kazakhstan. Big Almaty Lake is located at an altitude of 2500 meters, and is the main source of drinking water supplying the city and region below. Aerial view of Astana’s neo-baroque Avenue of the Republic: The grand center of the new town. Members of a wedding party race through the open roads of Astana in the summer time. Youth socialize along the artificial banks of the Ishim River, Astana. A quirky façade banner advertisement on a building in central Almaty. 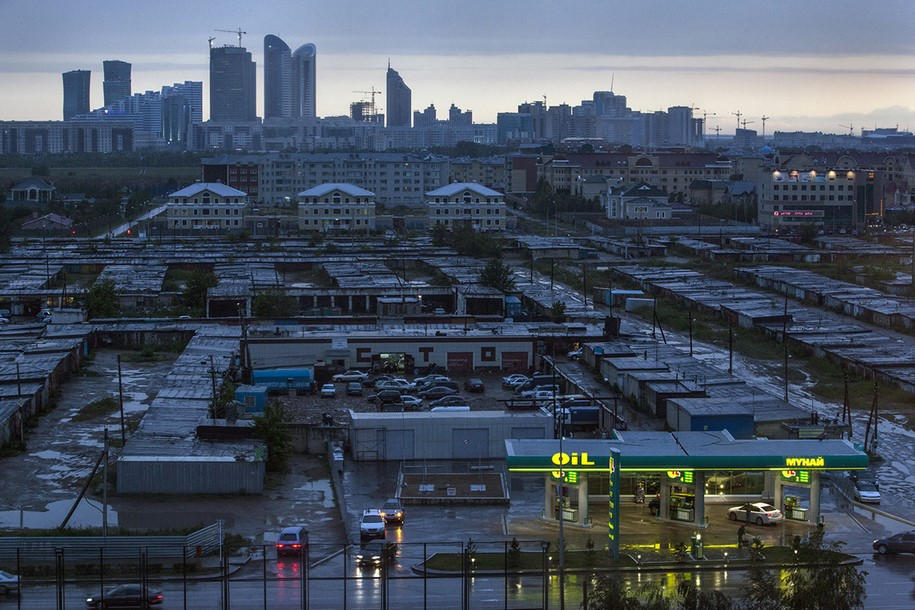 Astana Day celebrations of July 6, celebrating both the inauguration of the new capital city Astana, which coincides with President Nazarbayev’s birthday, also July 6. Girls wade in one of Astana’s multiple outdoor fountains. A bulldozer digs into the Ishim river, presumably for future development in Astana. Members of the military arrange barriers in Panfilov Park, Almaty, in preparation for Victory Day, a national holiday that celebrates the victory of the Soviet Union over Nazi Germany in the Great Patriotic War (World War Two). A French fashion photographer on a city tour rides a horse presented to him by locals, near the tourist attraction Medeu in Almaty.