Gardens of the Bay are the largest garden project in Singapore and are located in the continued development of Marina Bay in the country’s centre. It is managed by the Singapore’s National Park Board and is an integral part of a strategy by the Singapore Government to transform Singapore from a “Garden City” to a “City in a Garden”.

The park is 101 hectares (250 acres) and it consists of three waterfront gardens: Bay South Garden, Bay East Garden and Bay Central Garden.  The Gardens by the Bay is intended to become Singapore’s premier urban outdoor recreation space and a national icon.

After an international design competition, a team leading by Grant Associates a UK based Landscape Architecture Firm and Wilkinson Eyre Architects also a UK based Architectural Firm was appointed in 2006 to by the National Park Board of Singapore to design the Masterplan of the Bay South Garden, the first and largest of the three planned garden plots of the Gardens by the Bay.

Taking the inspiration from the form of orchid, the national flower of Singapore, the masterplan is a rich blend of nature, last word of technology and excellent environmental management. The whole park looks like a well finished puzzle which consists of multiple architectural structures, a huge variety of horticultural displays, lakes, mini forests, event spaces, tropical sound shows, daily light which invades through the whole park, dining offerings and retail spaces. One of the most important aspects is that the whole park has an intelligent and sophisticated environmental infrastructure which allows endangered plants, normally non-growing in Singapore to flourish providing at the same time educational and leisure prospects to the visitors.

Wilkinson Eyre Architects which were part of the leading team where appointed to design the two giant domes, the Flower Dome a 1.2 hectares plot and the Cloud Forest Dome a 0.8 hectares plot respectively. Both of the outstanding domes represent an innovative integration between architecture, structural technology, environmental engineering and of course landscape architecture and design. The visitor has the opportunity to see and investigate the application of sustainable energy solutions and at the same time to explore the bond relationship of man and the nature’s ecosystem.

More into context, the Flower Dome replicates the cool-dry climate of Mediterranean and semi-arid sub-tropical regions such as South Africa and parts of Europe like Spain and Italy.  The Cloud Forest Dome replicates the cool-moist climate found in tropical mountain regions between 1,000 to 3,500 meters above sea level, such as Mt Kinabalu in Sabah, Malaysia, and high elevation areas in South America.

The Conservatories use a chain of technologies to achieve at least 30% saving in energy consumption, compared to conventional cooling technologies.

A collection of four themed gardens reflects the history and the culture of Singapore’s three main ethnic groups and colonial past. Mass flowering and a vast colored foliage landscape form an impressive mixture of colour, texture and fragrance providing an expectable experience to the visitors. Each of the gardens has its own rich cultural significance and consists of different plant species. There are 2 collections, namely the Heritage Gardens and The World of Plants, which centre on the subjects: ‘Plants and People’ and ‘Plants and Planet’ respectively.

“Plants and People” consists of:

“Plants and Planet” consists of:

One of the most amazing structure in the whole park are the 18 Supertrees designed by Grant Associates and placed grouped in different places in the designed plot. Between 25 and 50 meters in height, 12 are situated in the Supertree Grove while the other 6 remaining are “planted” in clusters of 3 near the Arrival Square and Dragonfly Lake.

Each of the 18 Supertrees is comprised of 4 major parts. At the core of the trunk is a reinforced concrete column which provides and restrain the inner vertical structure. Around the core a steel frame forms the trunk which at the end flows in different directions simulating the real braches of a tree. The bark of the trees is consists of planting panels, either within the steel layer or directly into the concrete core. These planters are then planted in-situ to create the amazing living skin of each Supertree.

During the day the Supertrees’ branches canopy provide a great shade shelter but during the night the landscape changes dramatically while the Supertrees come alive with lighting and projected media that activate the skyline. A 128 meter long walkway connects the two 25 meters each Supertrees. This aerial promenade suspended from the Supertrees offers visitors a unique perspective at the gardens day and night. Also it has to be mentioned that all the Supertrees are embedded with sustainable energy and water technology, such as solar panels and rain collectors, integral to the cooling of the Cooled Conservatories.

The Dragonfly Lake is a 1km long lake creating a dramatic setting to the Supertrees and Conservatories. The distinctive Dragonfly Bridge connects the city to the central gardens. The lake is lined by boardwalk and special aquatic gardens and a system of filter beds that are part of the water quality management for the site.

This amazing forest has been planted using native species to simulate a typical S.E. Asian Rainforest

It is a large open space capable of holding outdoor concerts and events for 10,000 people or more

So the only thing that remains to explore in this fabulous Garden-Park is to walk it through by yourself.

“GARDENS BY THE BAY”_DRAGONFLY LAKE AND BRIDGE 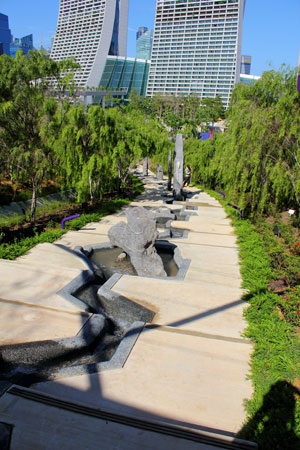 “GARDENS BY THE BAY”_DETAIL OF THE PAVING 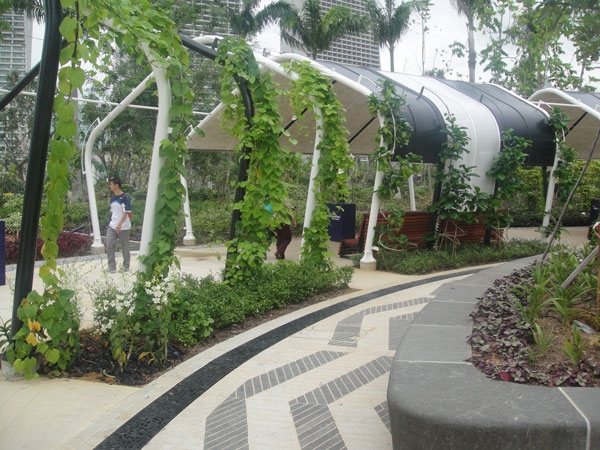 “GARDENS BY THE BAY”_DETAIL OF THE PAVING AND DIFFERENT STRUCTURES 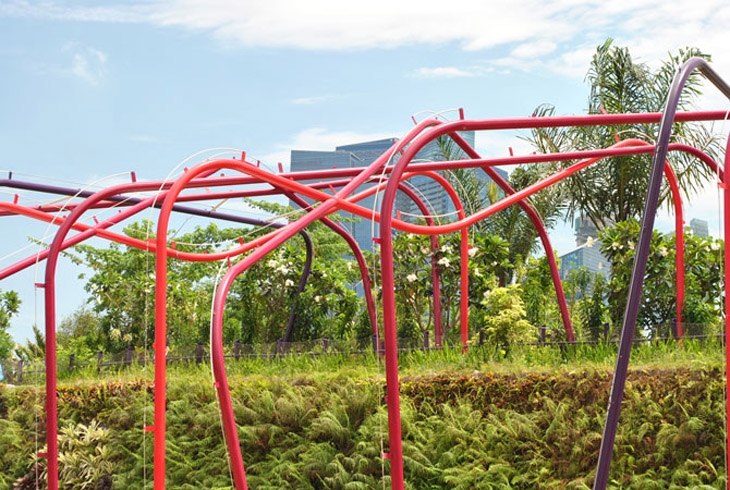 “GARDENS BY THE BAY”_ROOTS WALKWAY 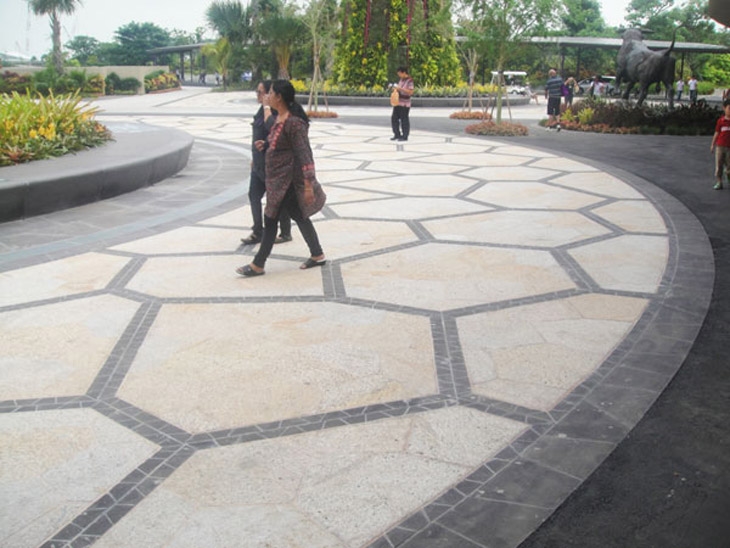 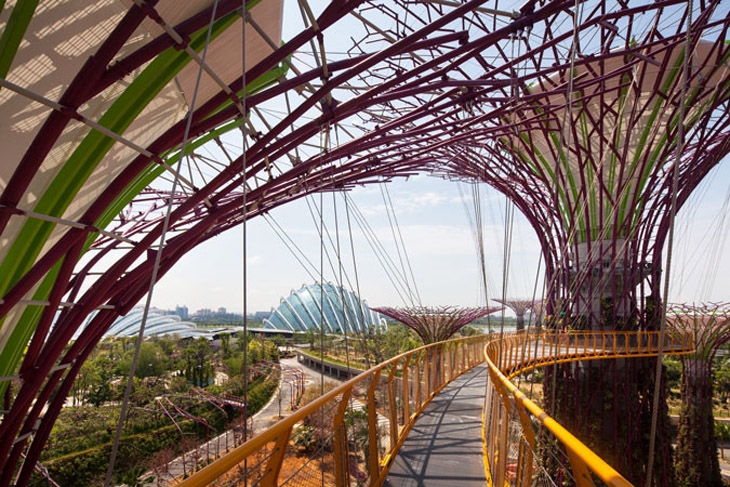 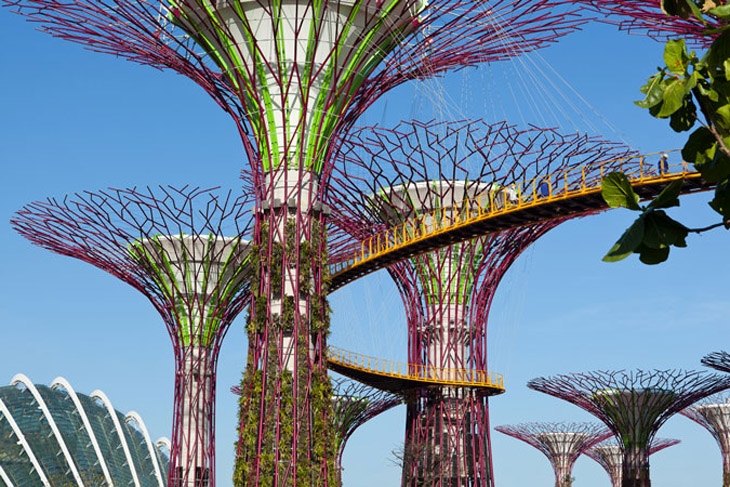 “GARDENS BY THE BAY”_AERIAL WALKWAY 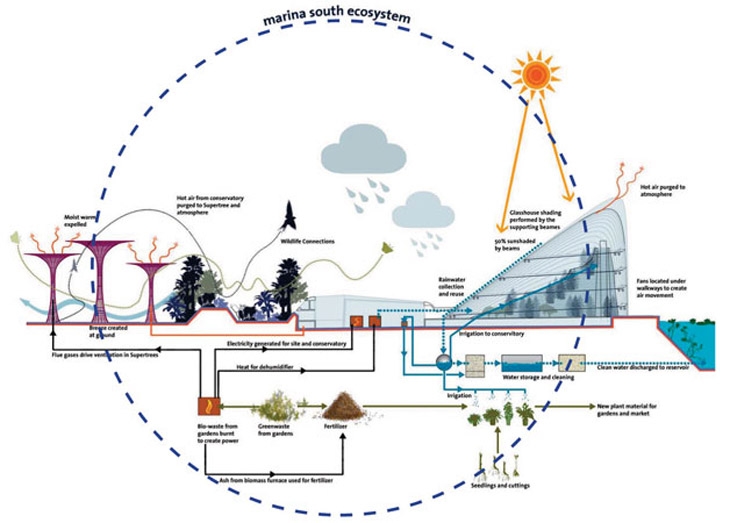 “GARDENS BY THE BAY”_ECO-DIAGRAM OF SUPERTREES AND SUSTAINABILITY 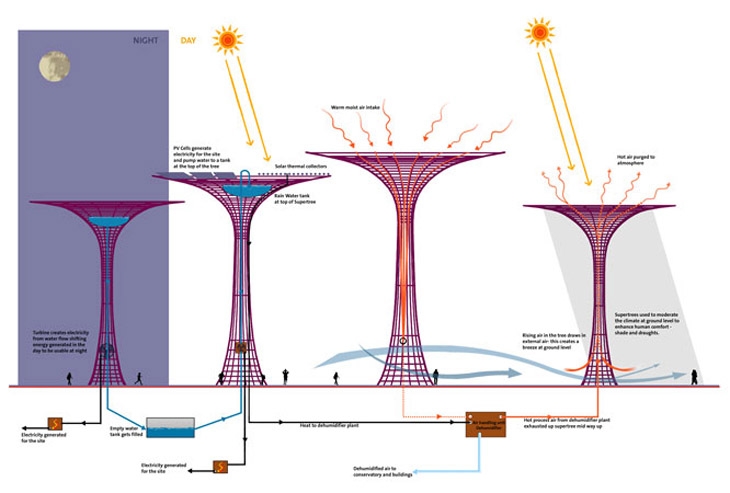 “GARDENS BY THE BAY”_ECO-DIAGRAM OF THE SUPERTREES 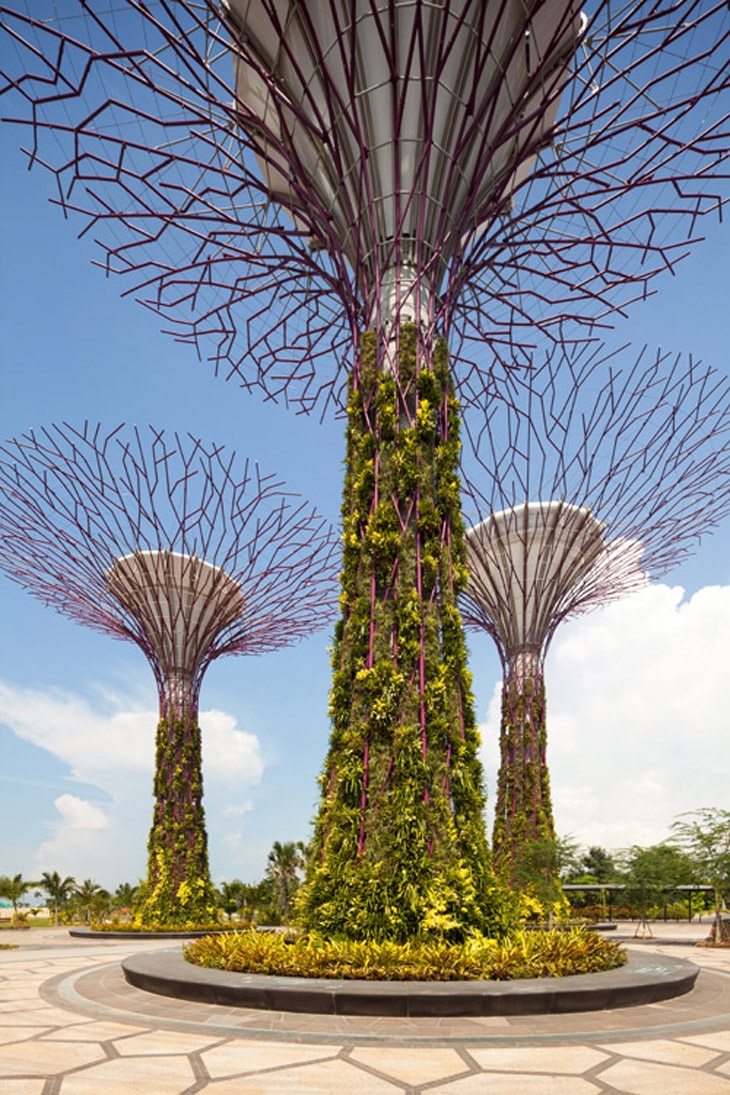 “GARDENS BY THE BAY”_SUPERTREES GROUP OF 3 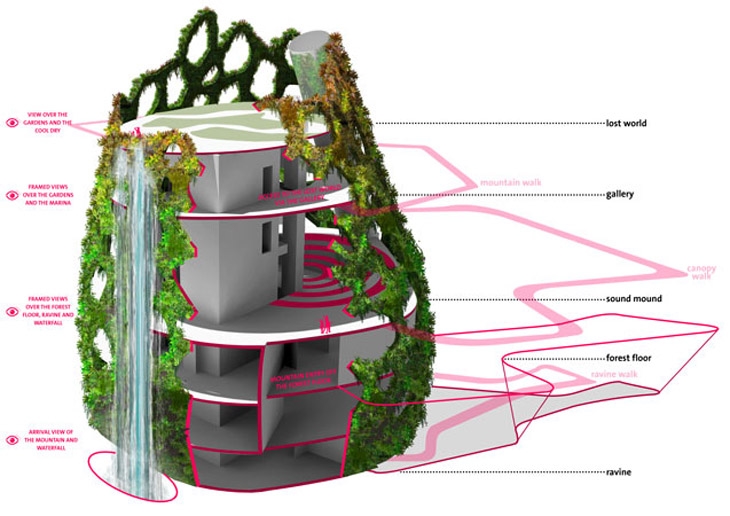 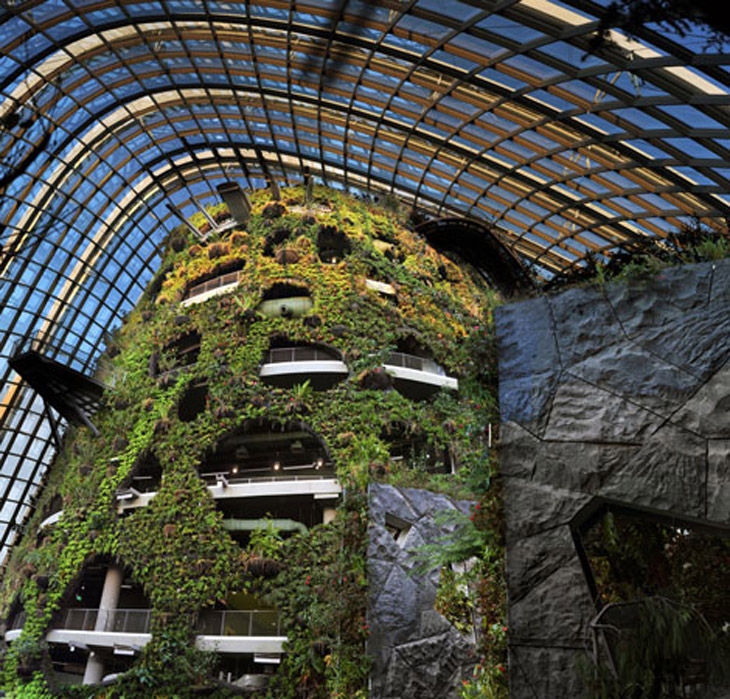 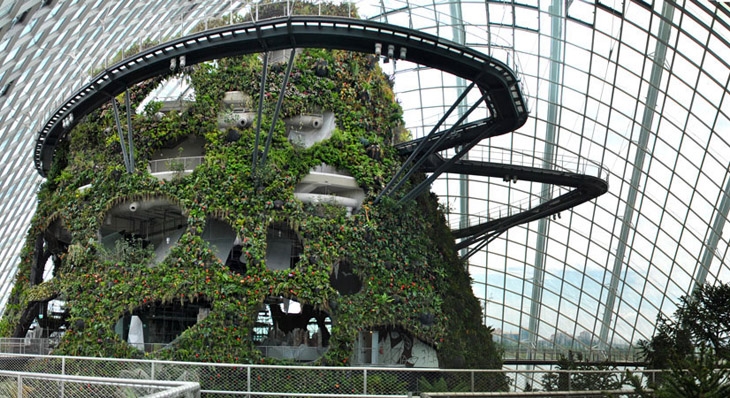 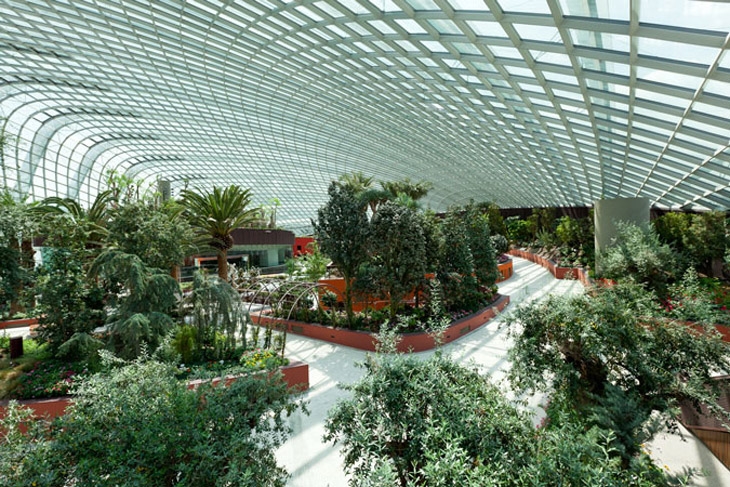 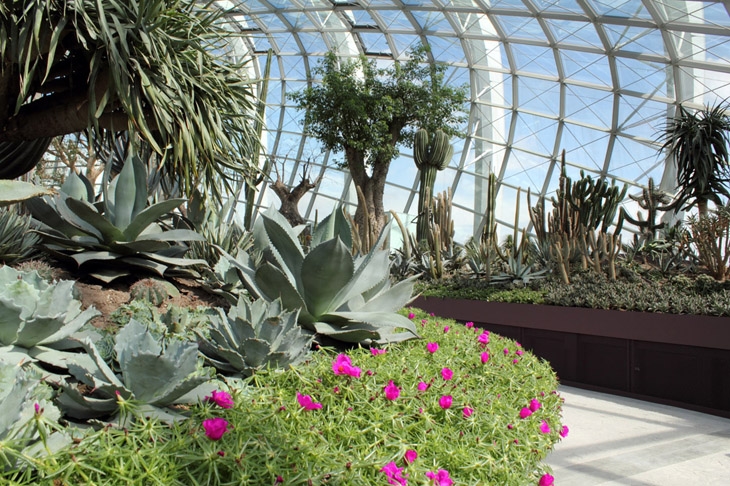 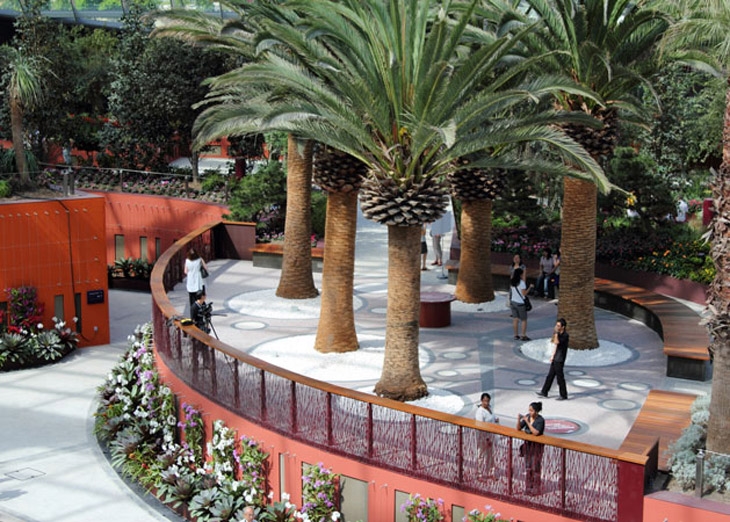 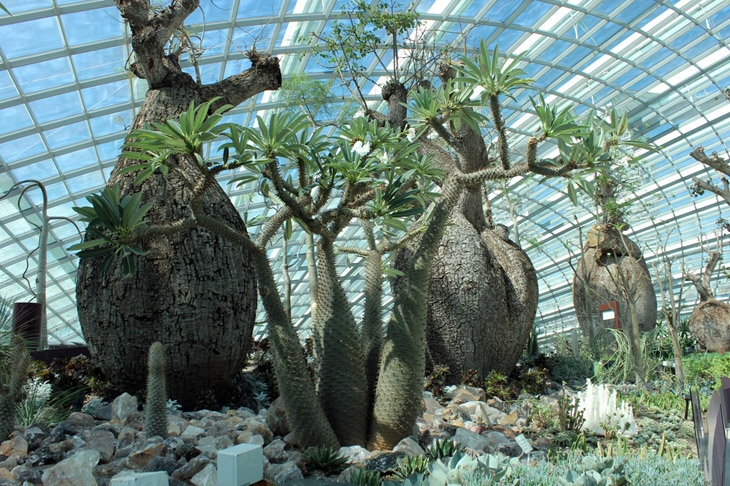 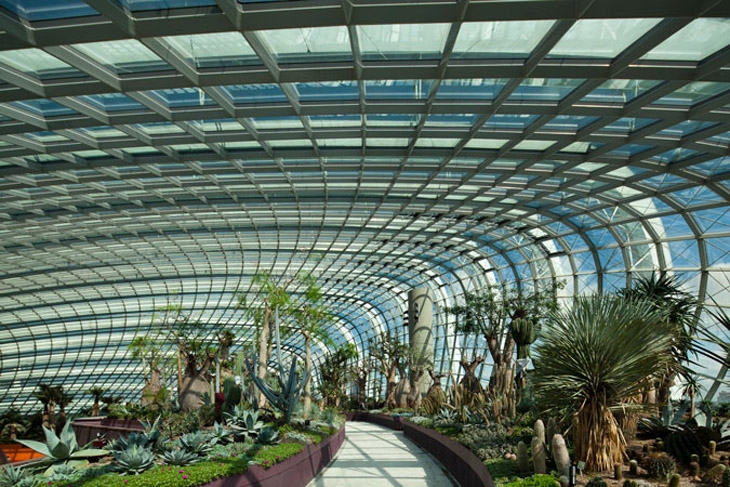 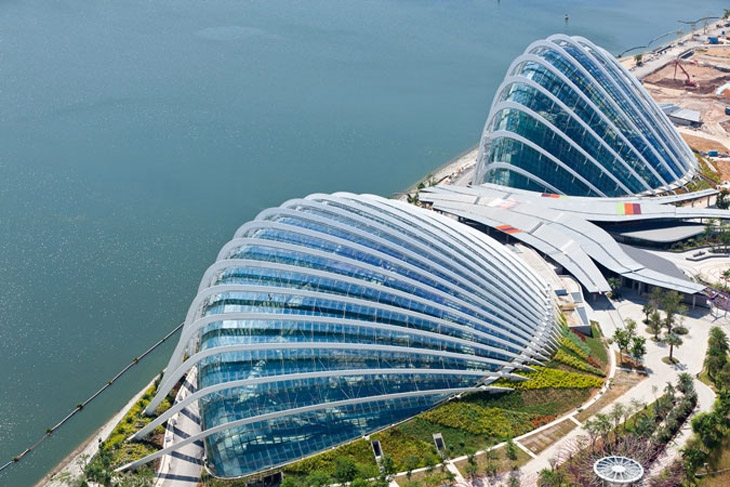 “GARDENS BY THE BAY”_CONSERVATORIES AERIAL VIEW 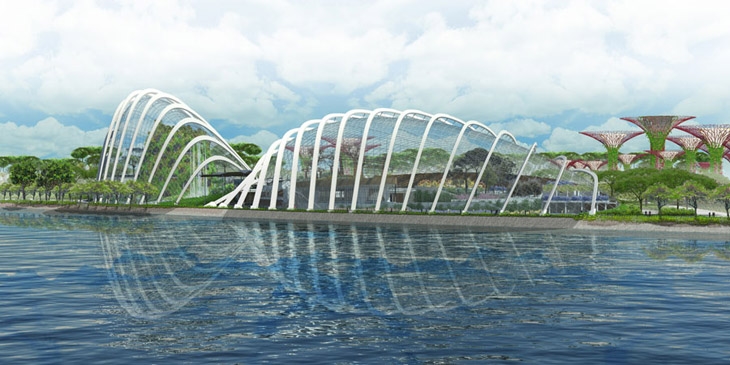 “GARDENS BY THE BAY”_CONSERVATORIES RENDER 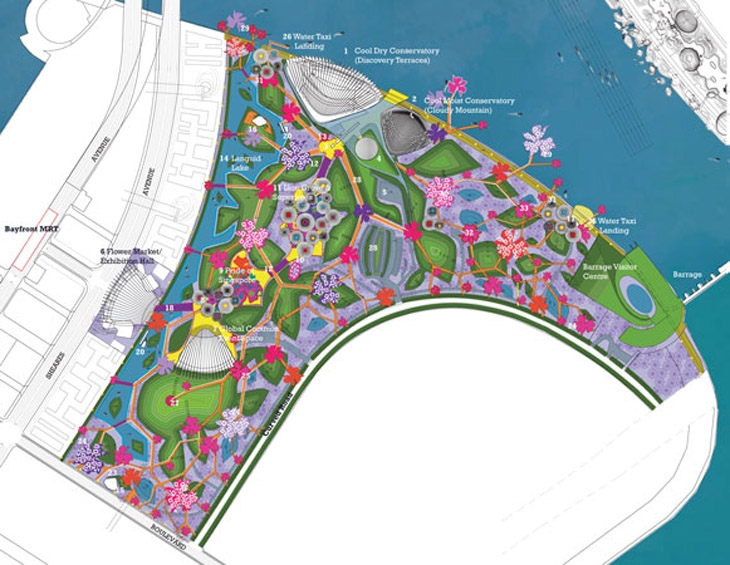 “GARDENS BY THE BAY”_MASTERPLAN OF THE BUILT PARK 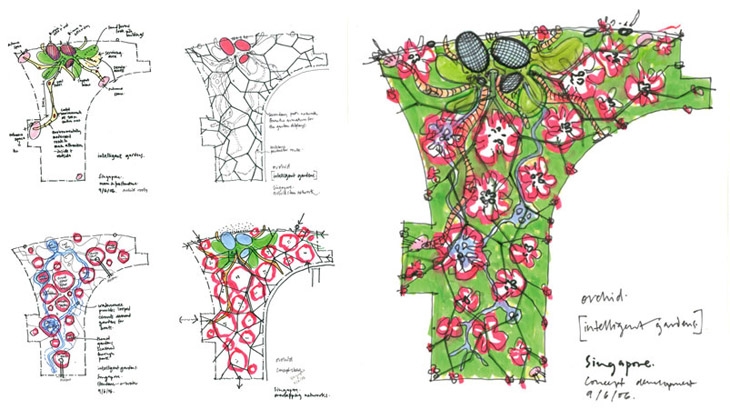 “GARDENS BY THE BAY”_MASTERPLAN`S ORCHID CONCEPT 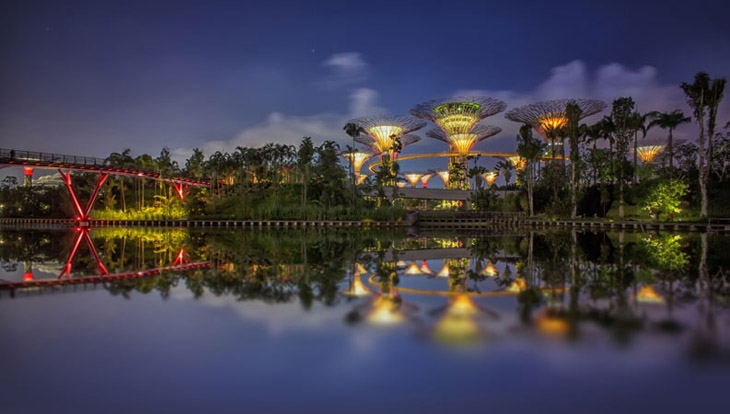 “GARDEN BY THE BAY”_GARDENS BY THE NIGHT 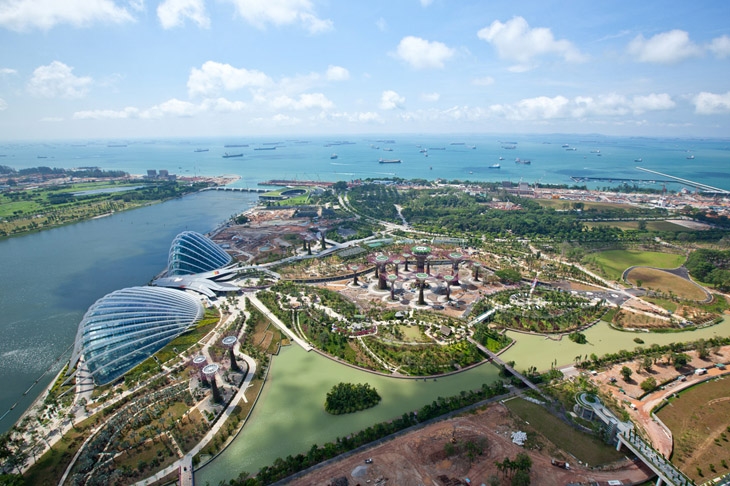 “GARDENS BY THE BAY”_BIRD`S EYE VIEW DURING THE DAY

“Gardens by the Bay”_Walking around the Park

The Greek Tourism Debate - The Aesthetics of Investment | What Happened