Architectural studio T.SQUARE Architects’ newest proposal is a residence in Thessaloniki, located in forest-like surroundings, yet close to the city’s urban realm. It occupies 250sqm and is divided in three levels. 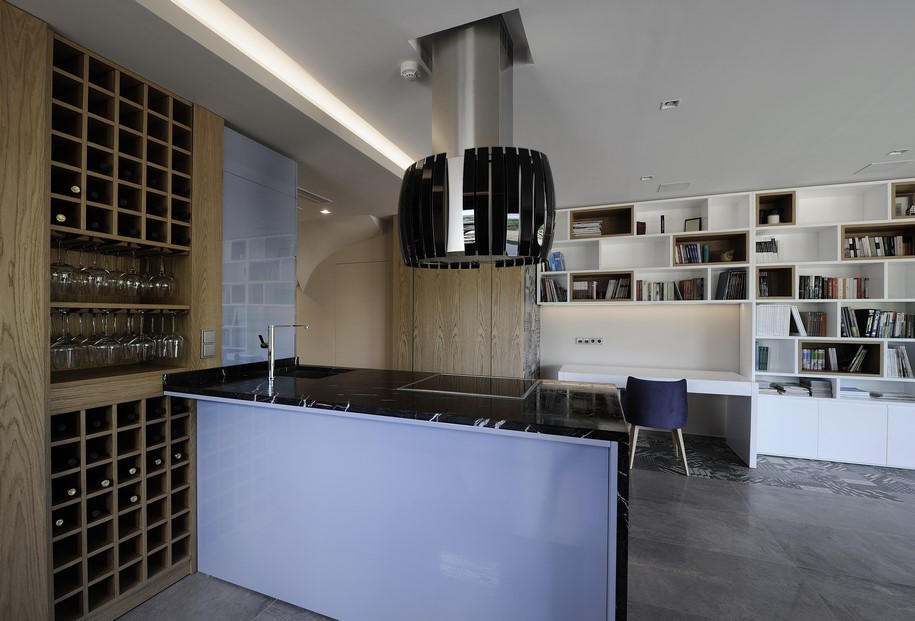 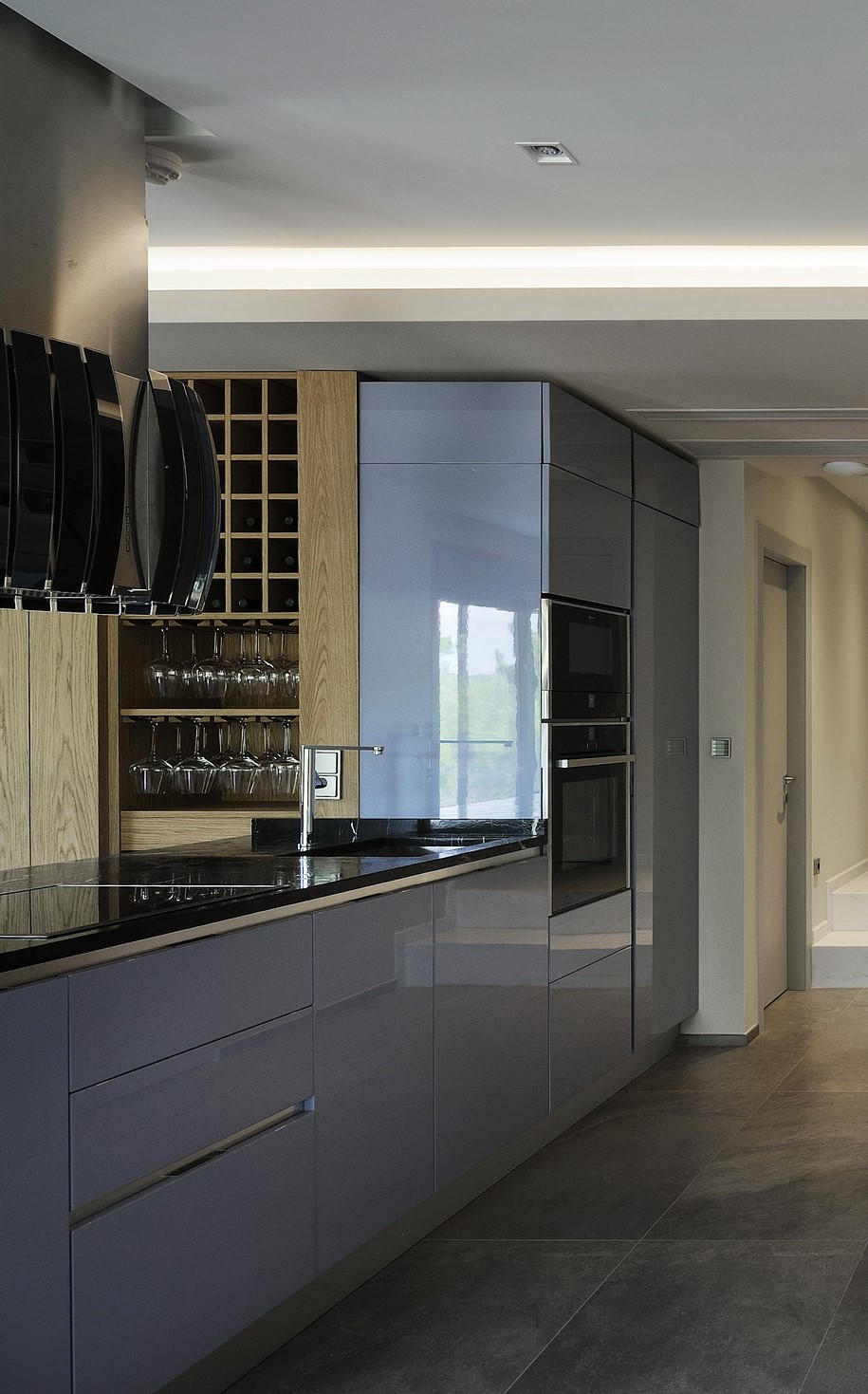 T.SQUARE Architects, inspired by the surrounding, proposed the use of a natural material, wood, so as to ensure that the interior will retain a warm feeling.

Wood appears in each level in a different way, as an extruded structure in the second level, as a perforated panel in the third level, and as a “container” in the first level. 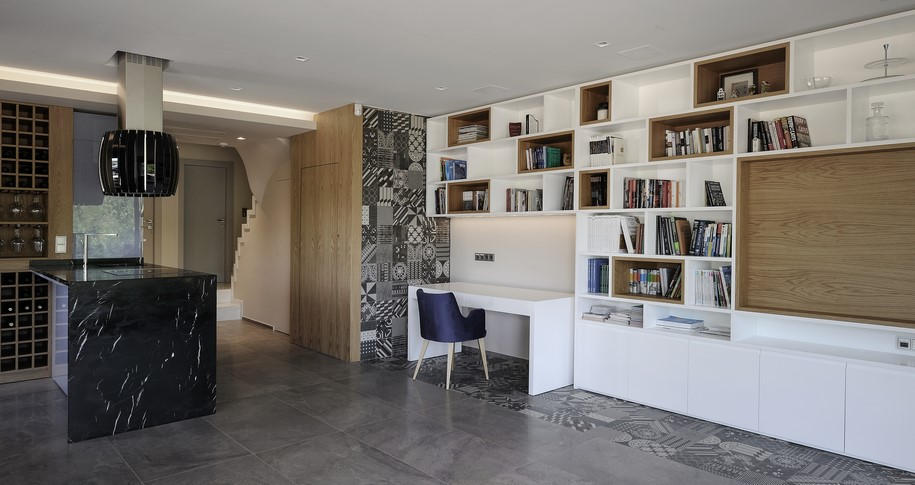 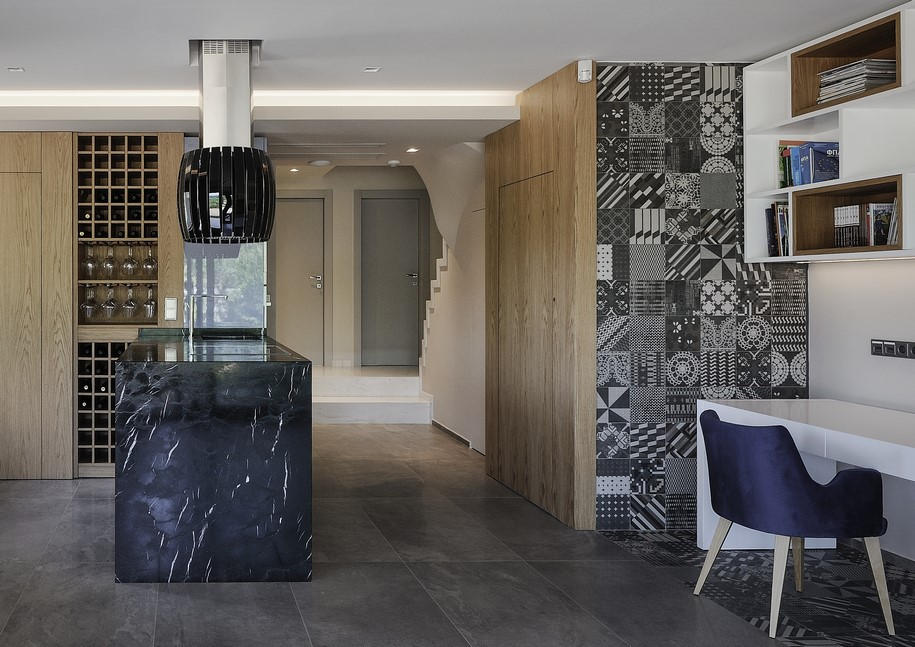 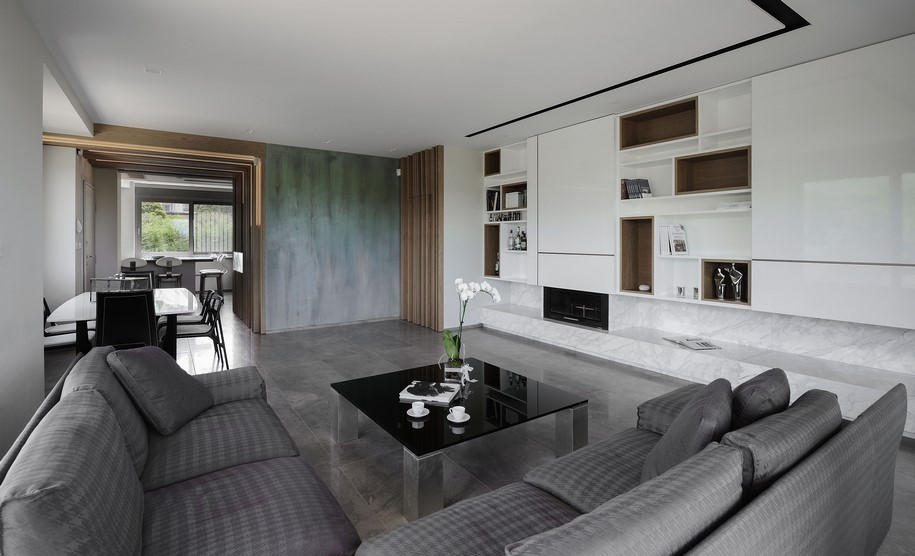 The main entrance of the residence is in the second level due to the inclination of the site. It is signified by an extruded structure made of wooden laths which coats vertically the backside of a storage space and continues horizontally on the ceiling. The paneling is made of oak stripes that incorporate artificial lighting by using led stripes, thus creating an interesting game of shadows in the space.

The second level, apart from the entrance space, also consists of the living room and the kitchen. In the living room, the fireplace’s volume is integrated with the library’s structure, which is floated over it. 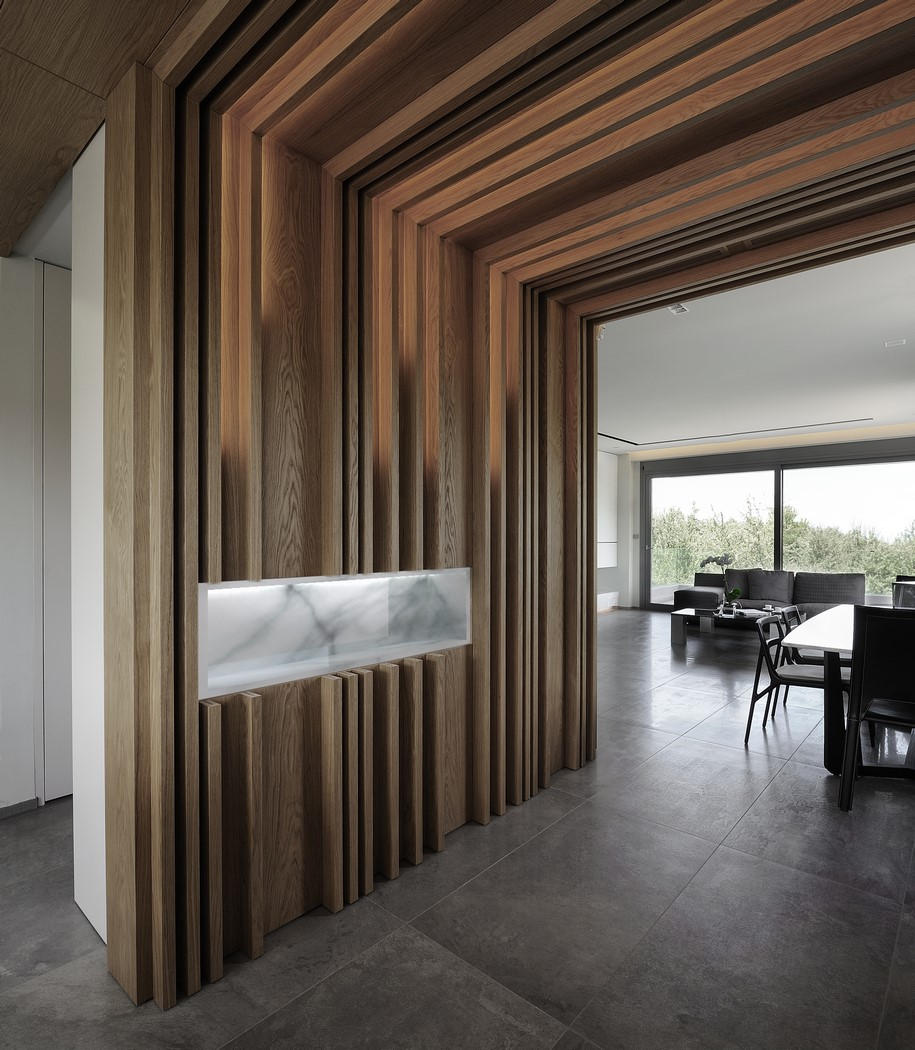 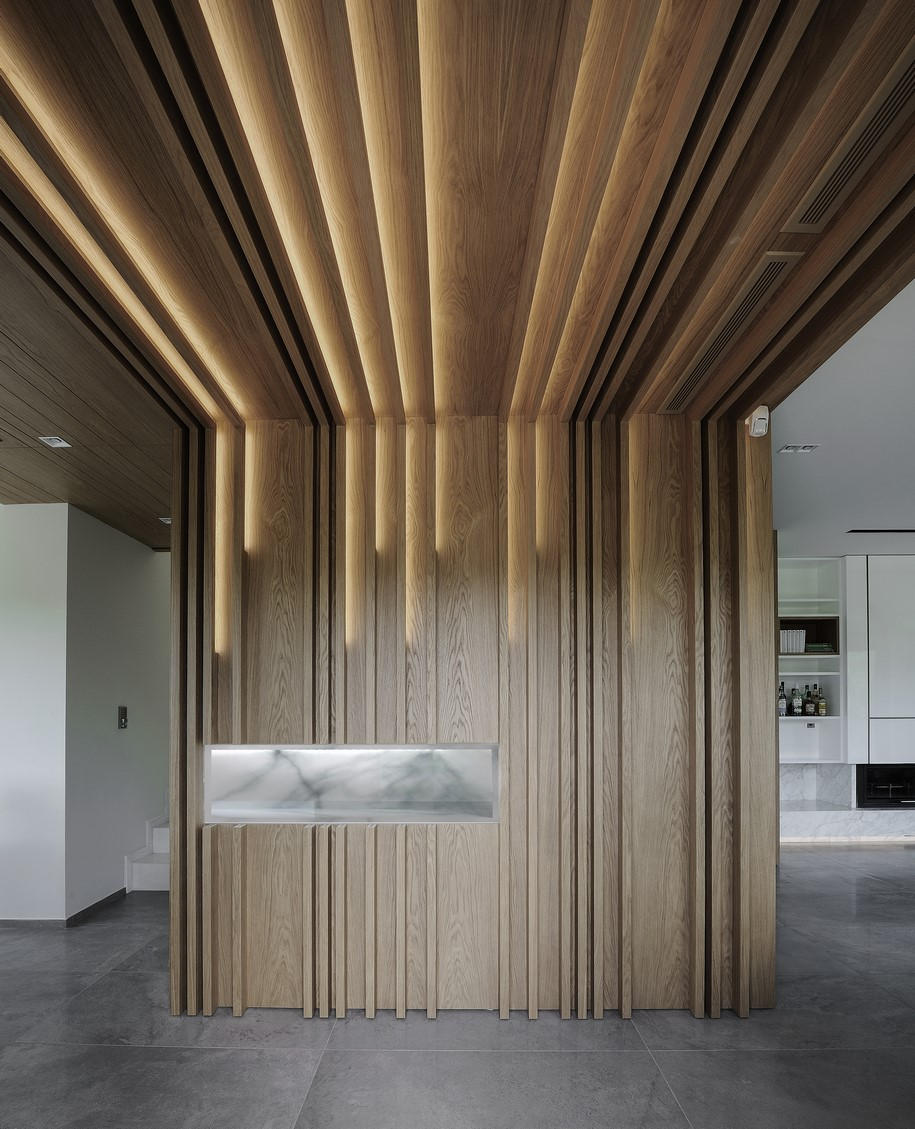 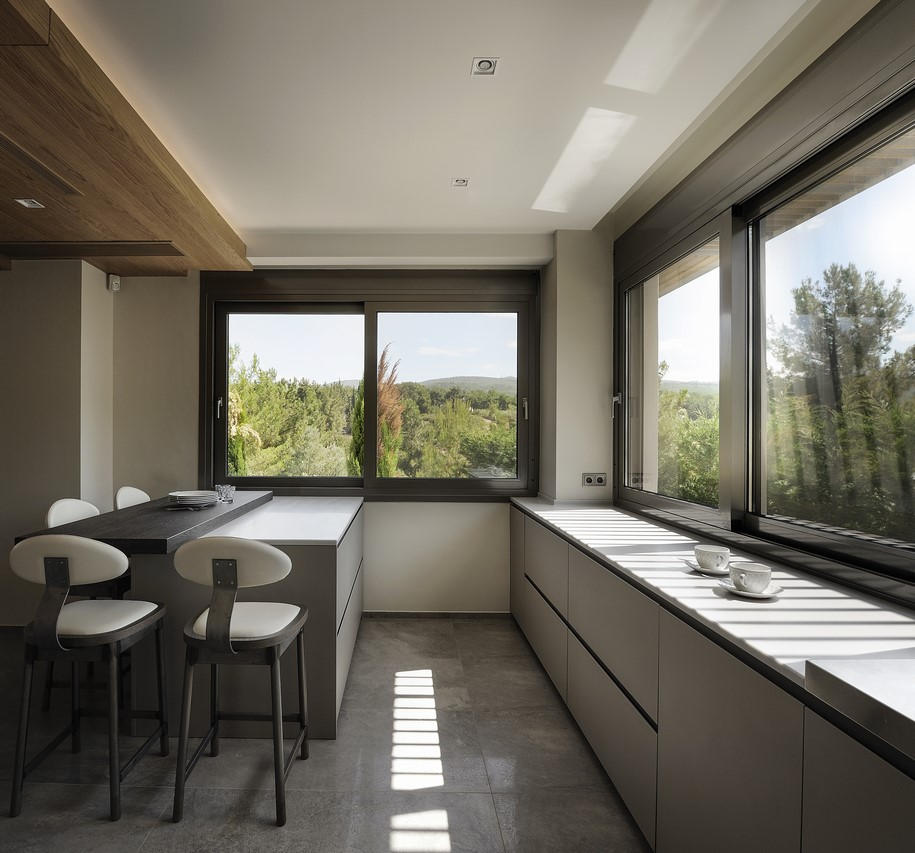 In particular, part of the owner’s desire was to design a bookshelf as a multi-functional type of furniture. It resembles as a monolithic volume while having the panels closed, whereas when moved, the inner part of the bookshelf with the TV set is revealed.

Another natural material which also dominates in the area is Carrara marble. A volume made of this marble defines the structure’s base. 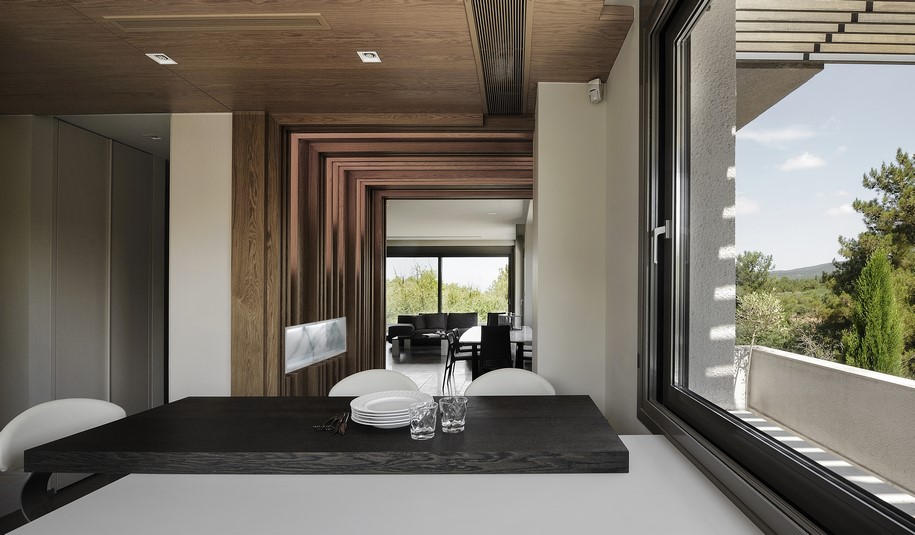 Moving on to the kitchen’s space, the dominant element is the mixture of rigid geometrical lines and materials chosen in grey-olive color, which provide the space with visual tension. The main staircase of the house is covered with whitewashed Thasos marble, and leads to the third level – the more private part of the house- where a master bedroom with the en suite bathroom and two children’s’ bedrooms are situated. 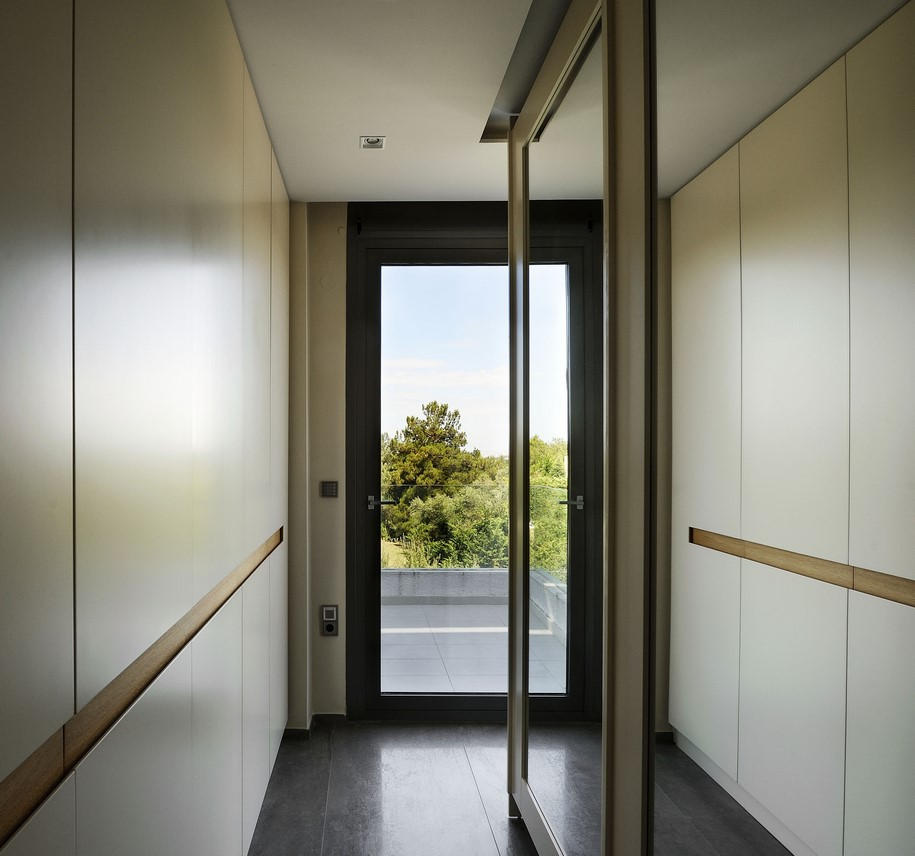 The master bedroom in the third level, follows the same architectural concept, so as to achieve material continuity. Therefore, wood is treated by using solid and void creating perforated panels; this wooden element expresses a feeling of warmth and serenity, and is combined with concrete screed (kourasanit) on the walls, and industrial flooring. Also, the need of shading due to the existing broad apertures behind the bed, led to the design of sliding perforated panels, which allow enough daylight rays to establish a game of direct and indirect lighting effect. 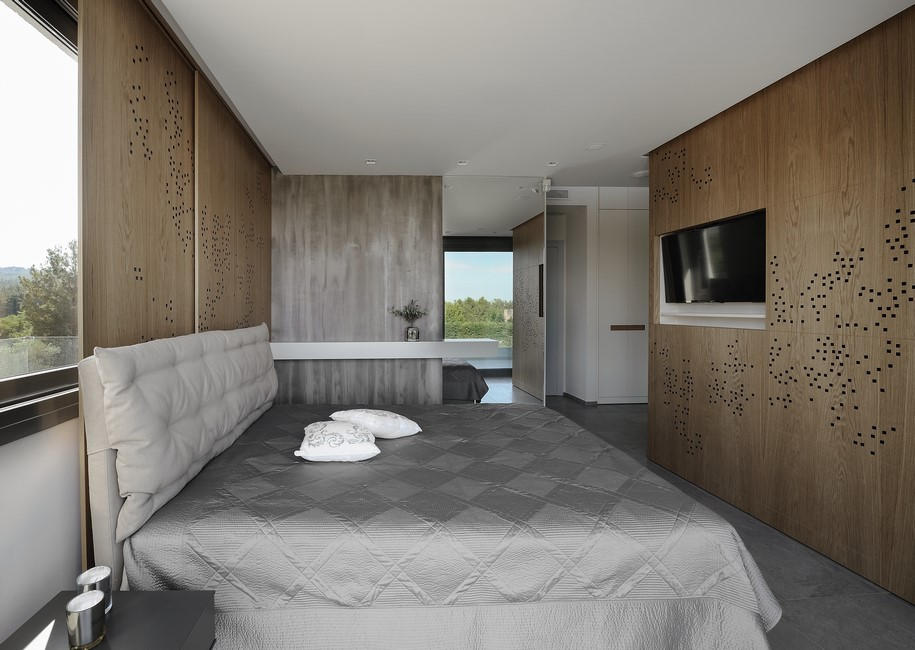 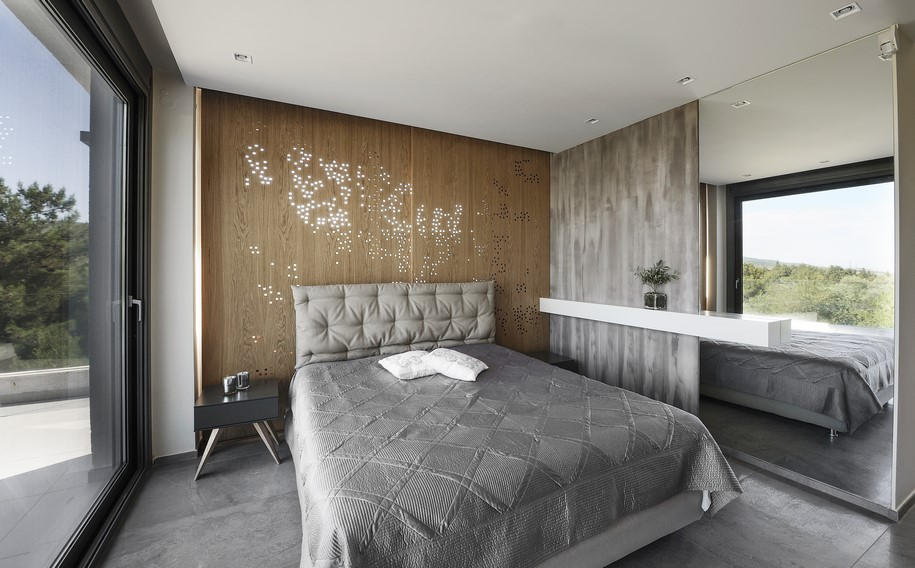 The master bedroom’s bathroom is again covered with Carrara marble. The double height space and the refined handling of suspended ceiling create an uplift of the space. Moreover, the location of directional spotlights and hidden lighting of led strips around the suspended ceiling produces an interesting composition of diffuse and indirect lighting effect. 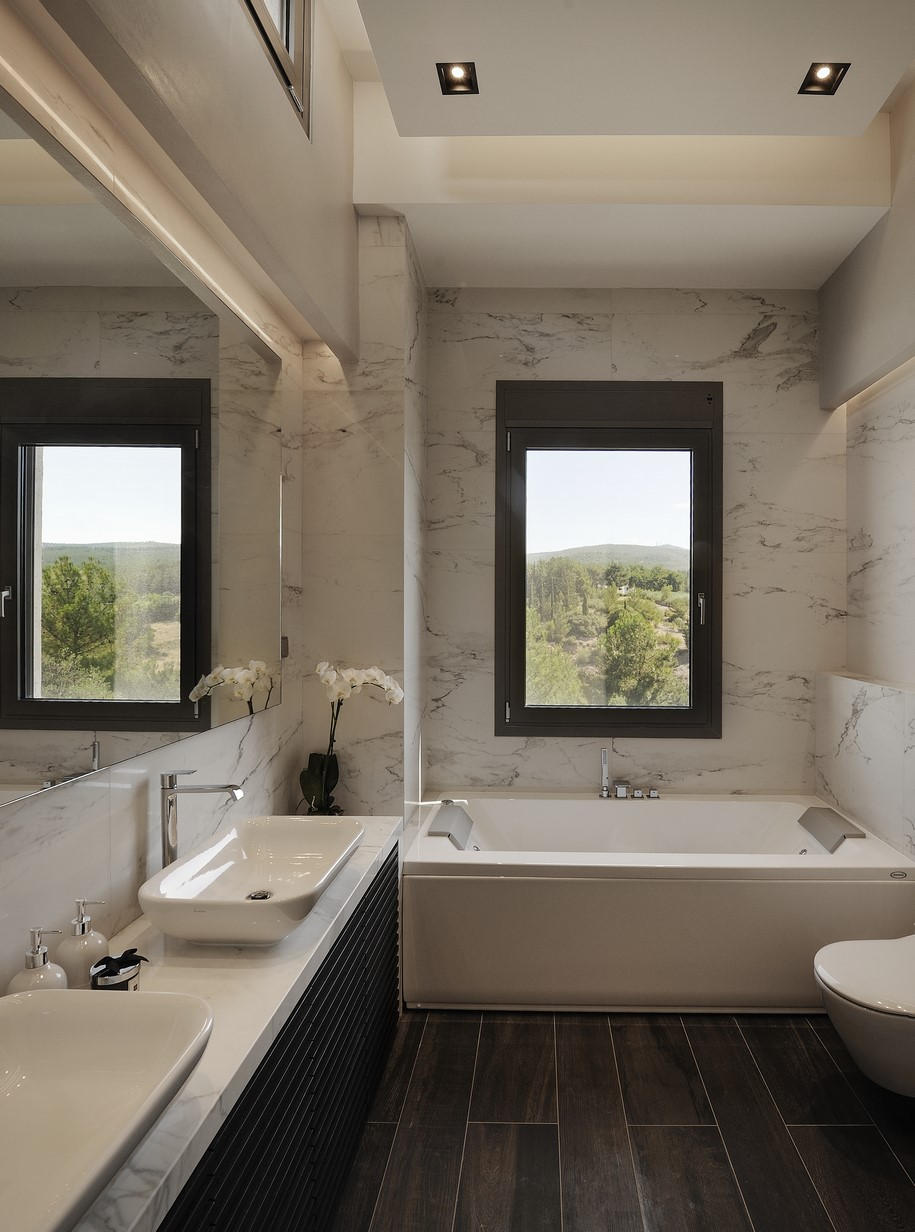 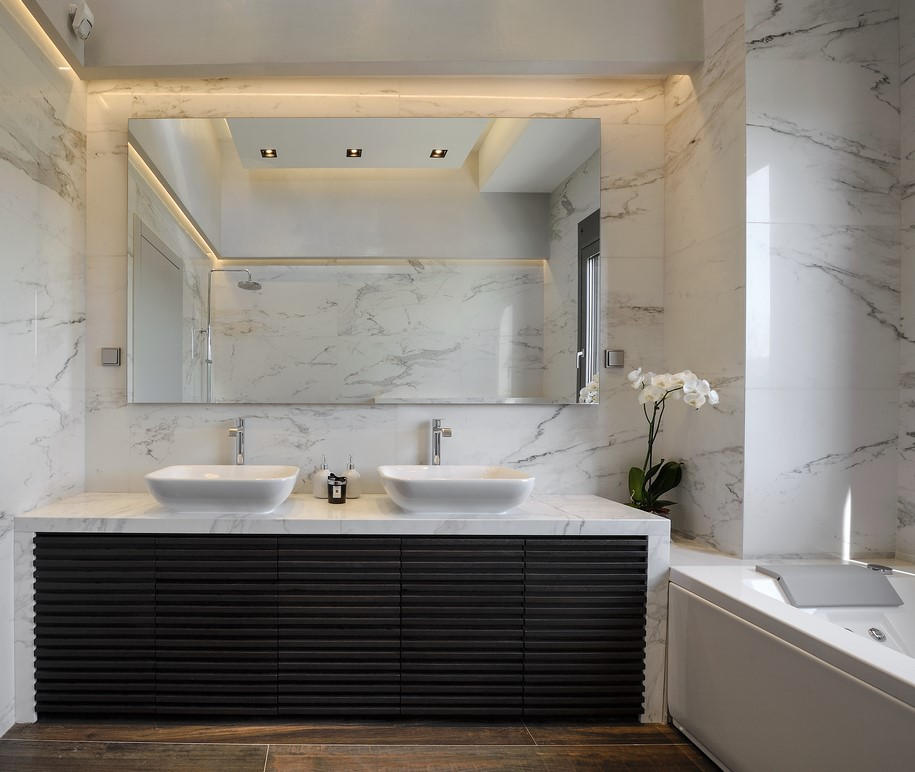 At the first level of the house, T.SQUARE Architects designed a more informal space than the second level – a living room, an office space with a bookshelf -, and a secondary kitchen which serves the outdoor garden space where the swimming pool is located. A stripe of concrete tiles enclose “the container” , bookshelf and office space. This structure is interrupted by wooden boxes and a large recess for the television covered with the same material.

MARGINE completes a home-studio in Rome with a jazz soul

by MELINA ARVANITI-POLLATOUArchisearchhttps://www.archisearch.gr/wp-content/uploads/01_Margine_Casa-del-musicista-%C2%A9Lorenzo-Zandri-1-370x700.jpg
SHARE THIS PAGE
WITH YOUR FRIENDS