Ciguë studio was commissioned by the electric bike brand Cowboy for the design of its new shop at the “Le Bon Marché” in Paris Rive Gauche. The interior space of the showroom combines natural materials and earthy tones with technology elements. Ciguë’s design “imagined a post-concrete city, organic and fluid, free from the angst-inducing presence of cars” as they state. 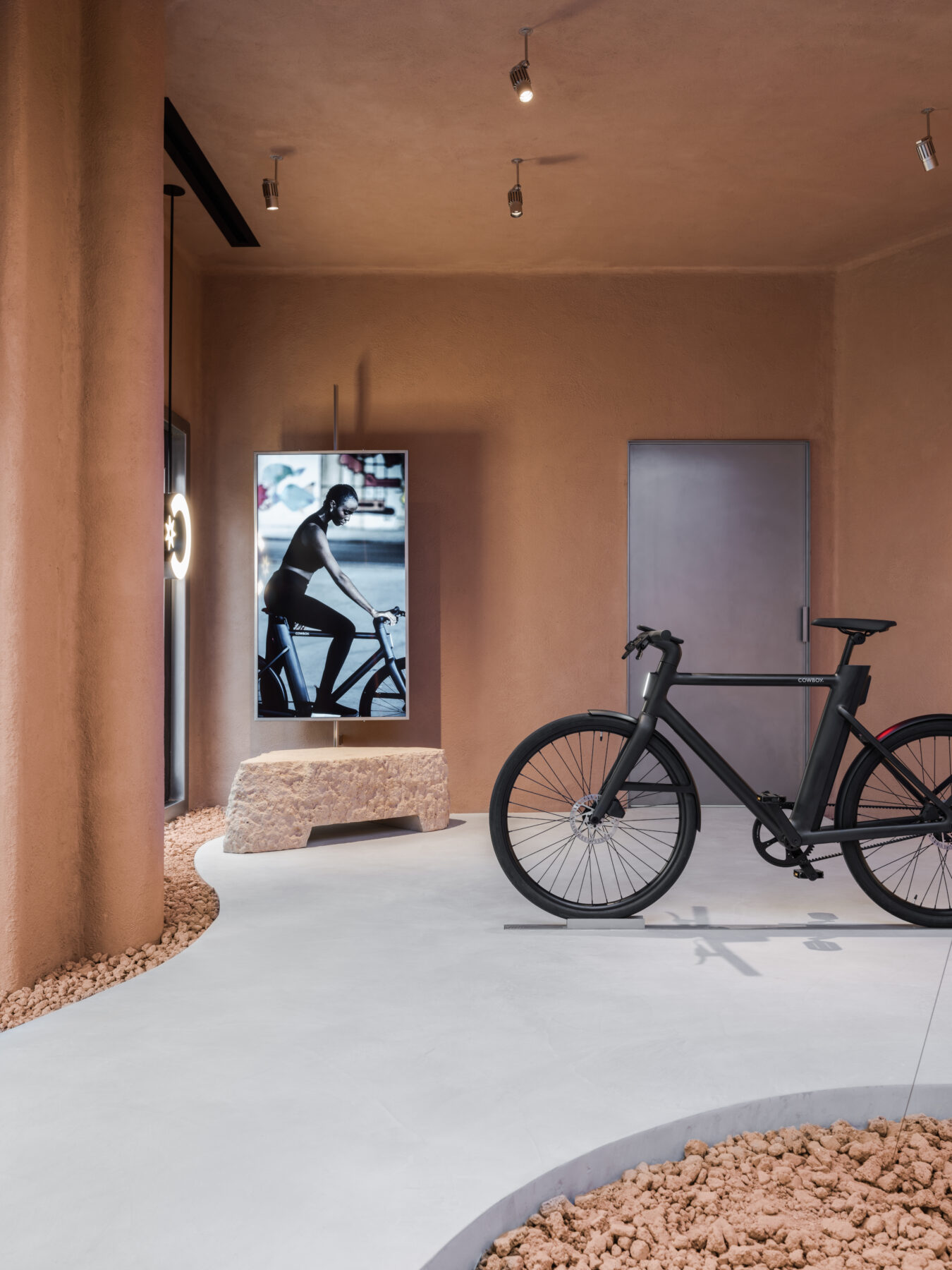 In this space traditionally dedicated to luxury brands, there is a new sense of freedom: at one with our machine, we connect with an urban landscape from which all obstacles are removed.

Ciguë’s design references an imagined post-concrete city, organic and fluid, free from the angst-inducing presence of cars. The space, entirely covered in raw earth rendering in shades of ochre, showcases the bike as a new object of desire, suspended between earth and sky, connecting nature and technology. 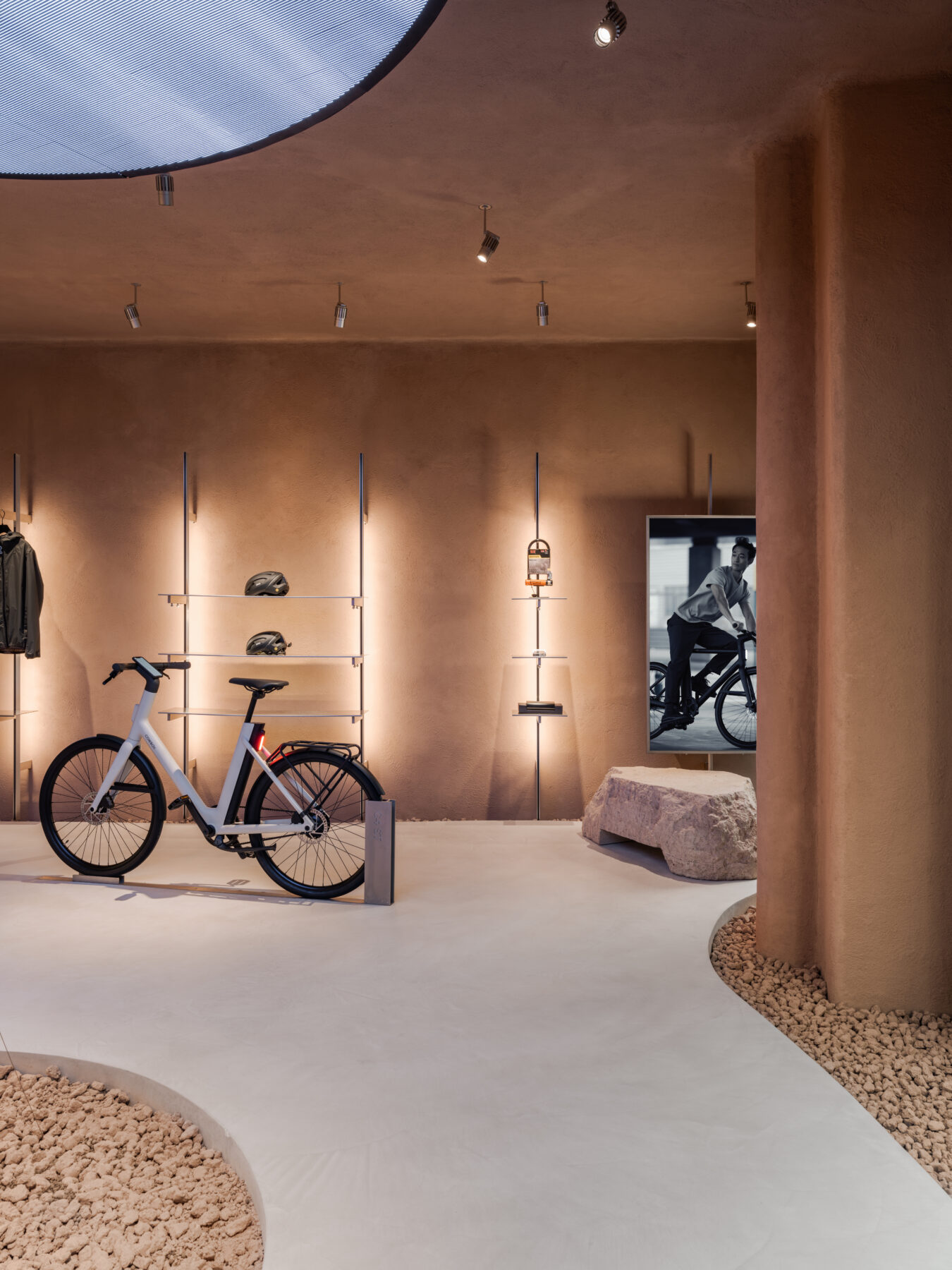 Excerpts from an interview with Alphonse Sarthout, founder of ciguë, and Tanguy Goretti, founder of Cowboy.

How do Cowboy’s high-tech mobility and ciguë’s low-tech approach intersect?

AS: We decided to highlight this contrast by placing the high-tech bike in a simple setting inspired by nature, with the most low-tech material of all, namely earth. But the design plays with technology too, with screens surrounding the bike. Our visions meet in our shared love of detail and precision. We identify with the superb finish of the Cowboy bike.

TG: The first thing customers do is touch the bike. The absence of visible welds and the materials used for the bike are embodied in ciguë’s display. The interplay of textures on the walls, the benches and the aluminium rack reflects this tactile technology. 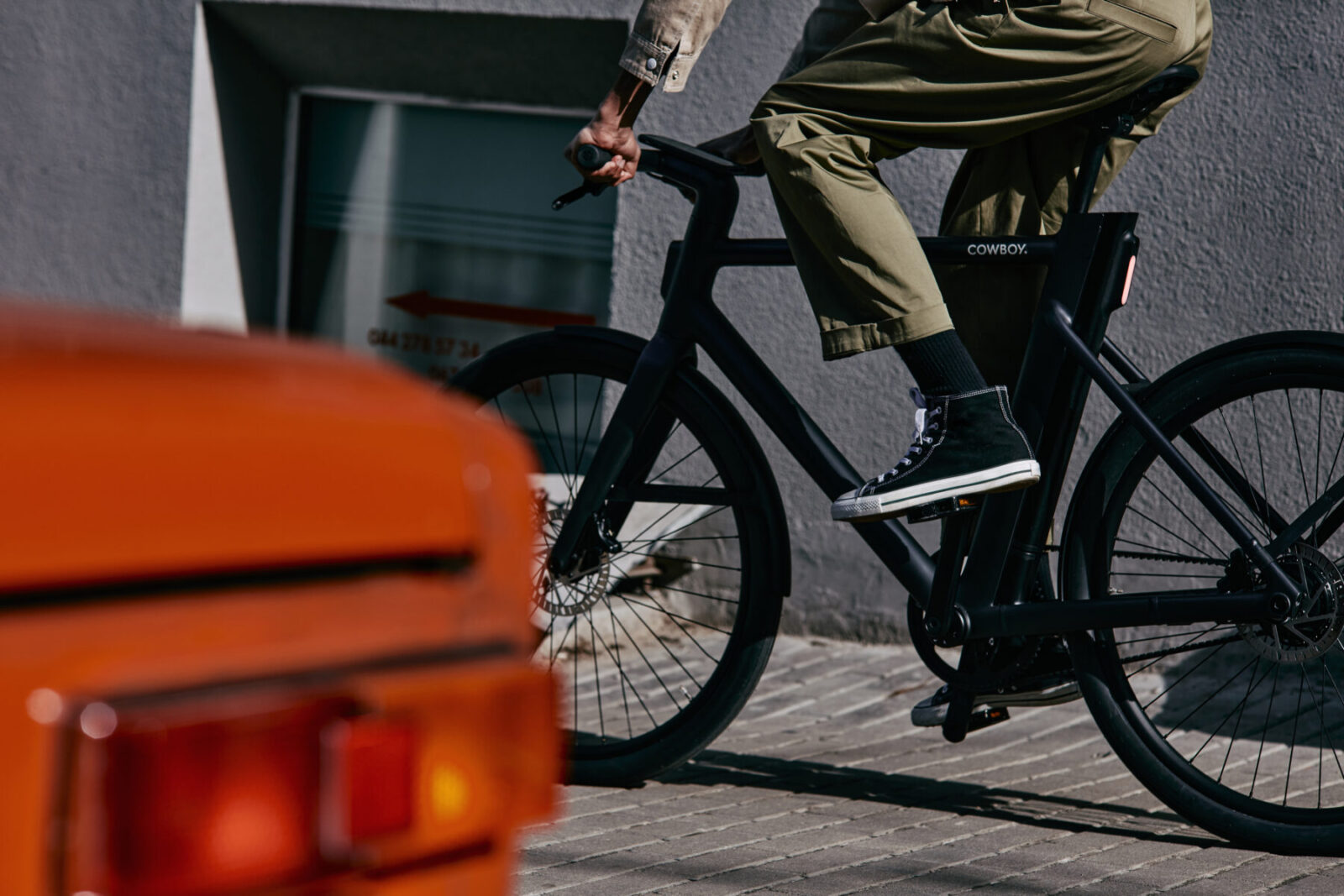 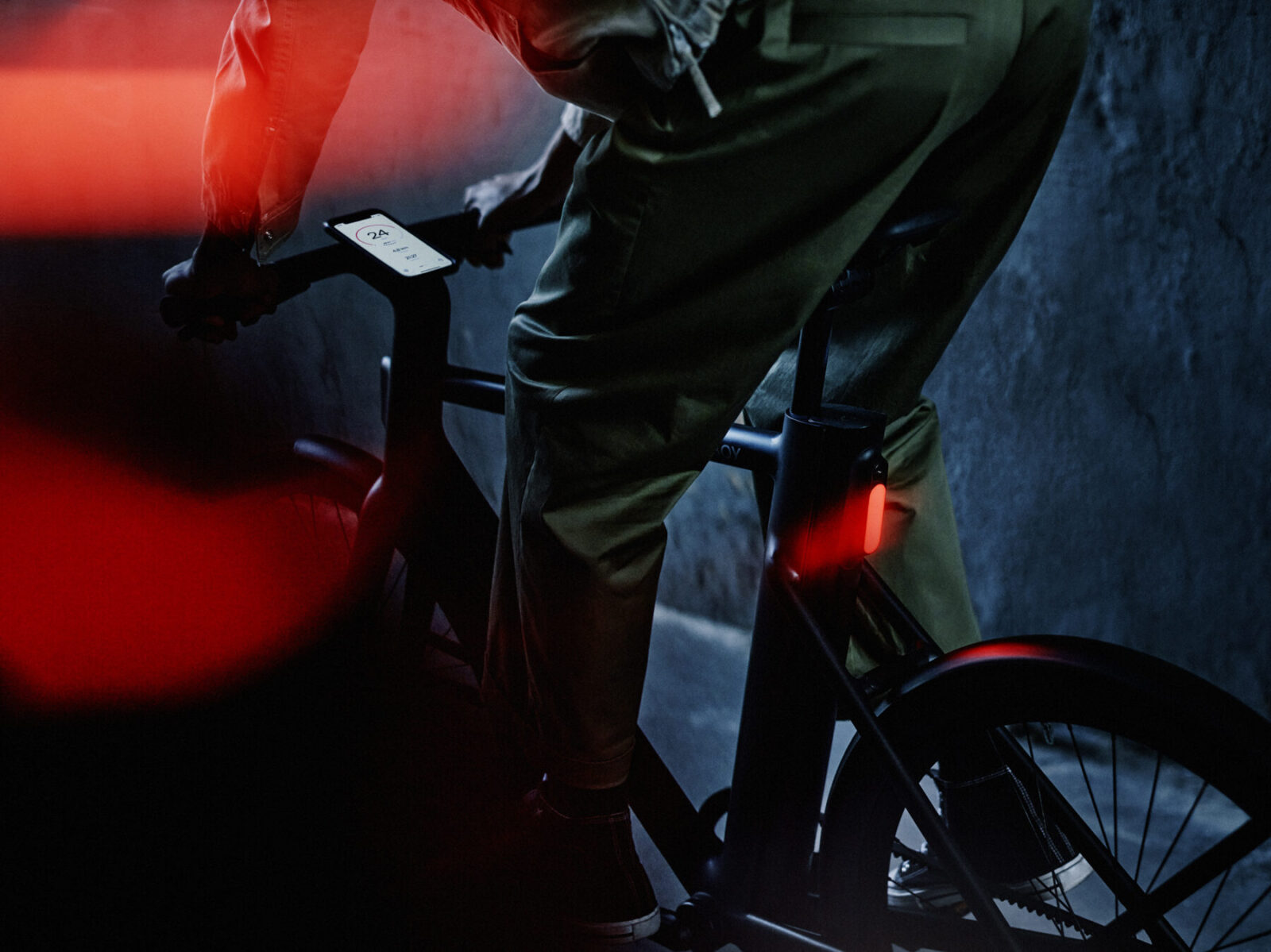 You’re keen on the idea of unhindered mobility. How can this idea be transcribed in a retail space?

AS: We were faced with a dilemma: Cowboy Bon Marché is the first Cowboy shop without direct access from the street. We had to reconnect the shop with the exterior. The videos of the sky conjure up the idea of movement and the passage of time. Similarly, suspending the bike in mid-air contributes to the idea of speed and effortlessness associated with electric bikes—the rider can sit up and observe what’s going on in the city.

TG: This isn’t just a bike built for speed, it’s also a tool that allows you to reconnect with the urban environment: it’s about experience as much as performance.

How do Cowboy shops relate to their surroundings?

AS: Using earth as a key element was a way for us to move away from the cliché of “urban = concrete”. Earth references the ground on which the city stands and its more natural areas. We opted for a warm-coloured earth from the département of Oise. We imagine that it will be possible to use different earth tones for different locations in the future.

TG: In general, our shops are designed as vibrant spaces for our community that are firmly anchored in their local surroundings: off-line spaces where people can get together and enrich relationships formed on line. In addition, all our shops have bikes on the pavement that can be tried out, which makes the street more lively. We continue to adopt the same “Cowboy spirit” at Le Bon Marché by maintaining the possibility of test-riding bikes outside. 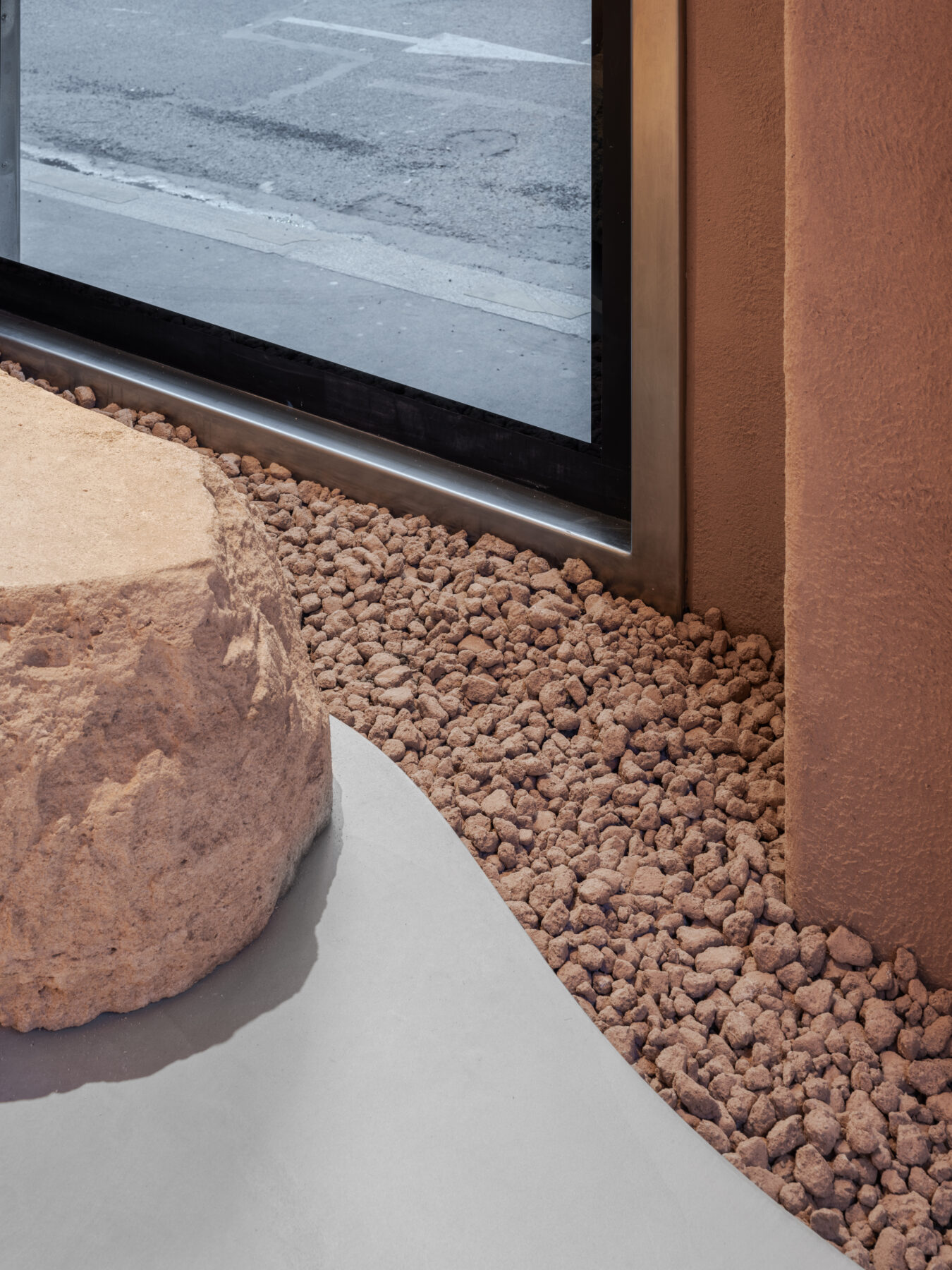 AS: The idea of a carless city was in our minds all the time as we designed the project. Electric bikes change our way of thinking about distance that can be travelled, what’s accessible in the city and new ways of moving around and discovering new areas. All this helps to shape a new kind of nomadism and new ways of projecting ourselves into the urban environment, with new landscapes enriching our experience of the city.

Since it was founded in 2003, ciguë has focused on producing environments at the intersection of space, design and installation. The desire to reconnect architecture with making has constantly evolved over almost 20 years in contact with different people, projects and contexts. This culture of thoughtful creativity has struck a balance between diverse architectural production, deft handling of materials and research projects carried out in the studio, especially on the subject of virtuous materials and energy saving.

Based in Montreuil in a building that serves as both an office and a research studio, the team of twenty people develops a very wide range of projects, from public buildings to custom-made objects and from the renovation of historic buildings to the creation of interiors, production venues and retail outlets around the world. Current partners are Camille Bénard, Julien Franc Wahlgreen, Guillem Renard and Alphonse Sarthout.

The studio recently designed the three floors of Sanaa’s building for La Samaritaine on the Rue de Rivoli, a timber bioclimatic house in Haute Vienne and a coffee shop for the Japanese brand %Arabica in New York. It has also carried out research on plaster concrete exhibited and published by the Pavillon de l’Arsenal.

Ciguë is currently working on some twenty projects including the Cergy Art School in collaboration with Raum in Nantes, a building in Jakarta that will be home to a %Arabica store, a renovation project for a 120-room hotel in Athens, a restaurant in a greenhouse on the shores of the Red Sea in Egypt, and its own future studio/living space in Montreuil.

Reinventing standards
Cowboy is the connected electric bike for urban riders and continues to transform the bike and mobility industries — from point of sale to point of service. Its mission is to power riders to map their own paths, through mindful movement that benefits all. Founded in 2017 by start-up entrepreneurs Adrien Roose, Karim Slaoui and Tanguy Goretti, Cowboy is headquartered in Brussels, Belgium. Cowboy is the winner of the Eurobike 2017, the Red Dot bicycle design award 2018 and the Red Dot Best of the Best award for product design of C3, C4 and C4 ST models. Cowboy operates in Austria, Belgium, Denmark, France, Germany, Italy, Luxembourg, Netherlands, Spain, Sweden, the United Kingdom and the U.S. with new moves on the horizon.