Estia (Greek): the virgin goddess of the earth, the right ordering of domesticity, the family, the home, and the state.

Given the fact that support to female participation within the Senegalese communities and equal rights regardless of sex is of fundamental importance, the Women’s House is designed as a new form of pencha, providing the opportunity for them to participate, get informed, discuss and act as active members within their society. 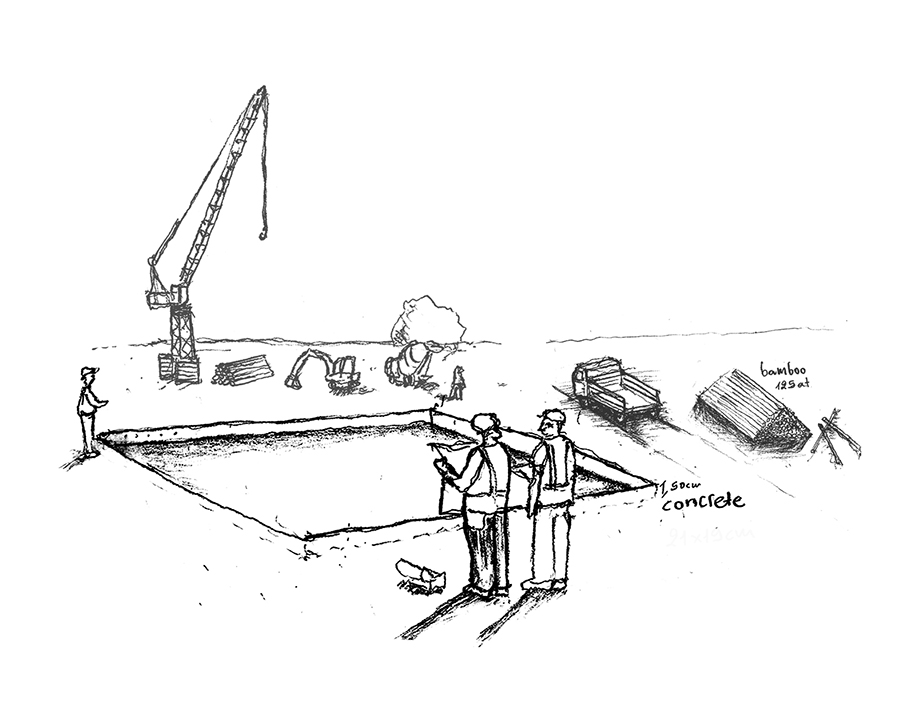 The three values around which the design is shaped are health, education, and creativity.

Many women and especially young ones in Senegal die due to maternal conditions, HIV/AIDS, and other equally severe diseases. So the building answers to this problem by creating spaces where awareness can be raised through open discussions in immediate relation to the element of water and by providing women with the sanitary goods necessary for their health.

As for our two other principles, education and creativity, the need for them stems from the daily lives of the Bagheri women. Most of them stay at home and occupy themselves with their households. It is stated that lone mothers and older women living alone have higher risks of poverty than men in similar types of households. Generally, women’s access to their cash income is much lower than men’s and they tend to be underrepresented in tertiary fields of studies related to science and engineering. Therefore further activities will be integrated to create more opportunities for women to be able to financially support themselves. Weaving, basket making, and agricultural activities are picked to be highlighted within the uses of the building and to be expressed at its shell, creating a more personalized and intimate space. This is being achieved by creating wooden looms on the shading panels of the elevations, through which women can practice weaving and traditional pattern making. Reading and educational activities are also designed to be provided to encourage women’s self-evolution. 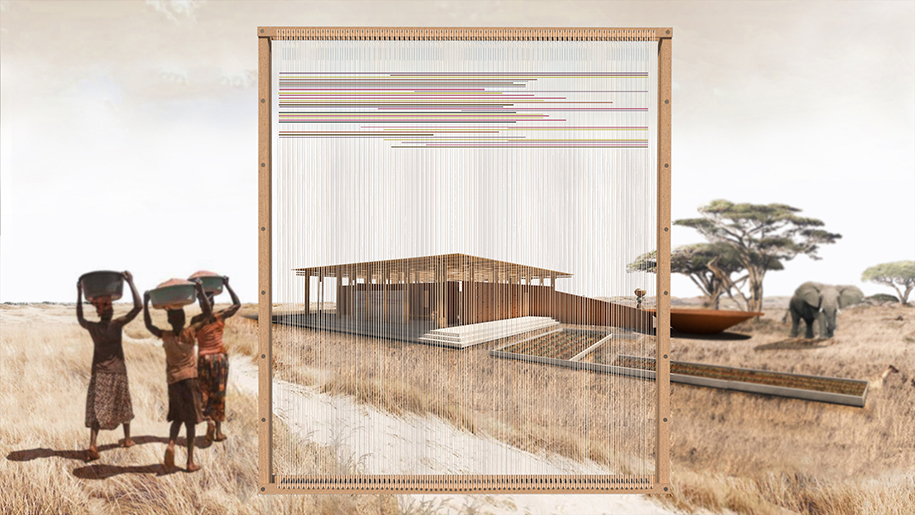 The building itself is designed as a closed mass in the center of which the main meeting area is located, with the potential to be subdivided into smaller rooms, with the use of weaved curtains, according to the desired use. The main meeting space contains a degraded, open-air sitting area, which fills up with rainwater during heavy rains and creates a calming and soul-cleansing element in the synthesis, a semi-open place for contemplating and open discussions. Sanitary facilities are chosen to be located close to the main building, but at a hygienically safe distance from the rest of the uses, providing enough private space for the women’s ease.

The house’s orientation is aligned to the rest of the village’s houses and its main entrance is shaped close to the nearest local road. Accessibility however is achieved by three sides, through a freely-shaped ramp on the southern side and a few stairs on the northern and eastern sides. The roof of the building is elevated from the perimetrical walls, so that warm air can escape from the interior and maintain a stable temperature in it.

The administration room is in close touch to the main entrance and overviews it through a large window. The roof of the building, along with the selected structural systemnorthern side of the plot, a specialized area for crops is designed, so that women can plant and grow a small number of goods for themselves, their families, or even fo creates a perimetrical gallery outside the main spaces and a semi-covered atrium within them, which provide enough shade to the rooms and allows outdoor activities to take place too. At the eastern side of the building, a large wall divides the main entrance to a semi-open exhibition area, in which women can put into display their creations and communicate their works to the rest of the village or other women.

On the r trade. The crops, along with some sanitary facilities can be supplied with water by a large water-saving bowl, attached to an elongated, inclined wall with a special gutter dug in it, which transfers the excess water from the roof to the bowl.

All shading panels and furnishing are designed to be constructed in situ, by assembling separate pieces of bamboo and binding them together with threads and traditional weaving techniques. Furniture, such as benches and bookcases is the only equipment chosen for the interior, with the prospect to be given more personality by their owners and users.

The structure and the furnishing of the house are designed to be easily fabricated locally, with local materials and personalized elements, to help women own their space and flourish within it.

The building is designed entirely of natural materials available locally to minimize the environmental impact and the shipping costs.

It consists of a 50cm thick concrete base to achieve the non-penetration of water inside the building and ensure hygienically safe conditions indoors. Bamboo, a material strongly present in sub-Saharan Africa, is used for the structural adequacy of the building with columns 15 x 400cm, beams 15 x 2000 cm max., secondary constructions and horizontal elements of the roof 5cm x 600cm, fixed with dowels and jute rope. Since the bamboo poles come in dimensions of 500cm and 600cm, the remaining material is used in between the columns to secure rigidity. The main material chosen for the wall construction is a mixture of additives based on soil, water, and straw. The process of making 9cm x 30cm bricks will be done with local soil, which can be found in the area near the construction site and that reduces the economic and energy costs of obtaining the raw material. The peripheral corridor of the building consists of panels of 2.15 x 1.85 m made of  bamboo, wooden battens, and thin ropes that facilitate their use as looms. The face of the building will be knitted with patterns and colors of the area.

The first step of the construction process is the assembly of all the bamboos and the composition of the columns. Each column consists of two whole bamboo poles and two small ones put between them, in the upper and lower end to stabilize the construction and save material at the same time. The columns that are put in the corners are made out of 3 whole bamboos and 4 small ones.

Once the columns are constructed, concrete with some reinforcement is poured into the ground where the building will be constructed, to ensure hygiene in the women’s house. 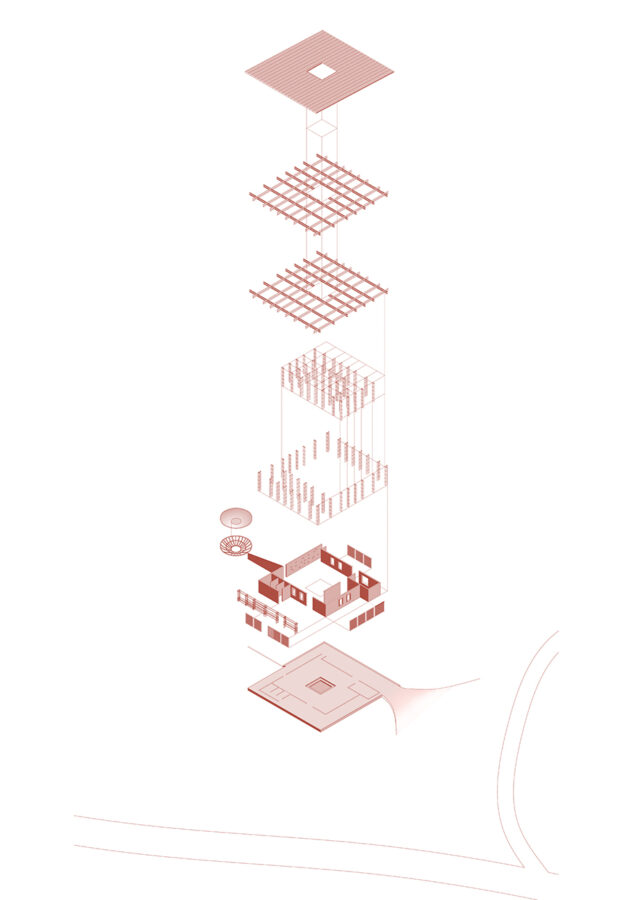 The roof is made out of 4 layers of bamboos. Every layer is placed in a rotation of 90 degrees to the layer above and below. The construction of the roof starts with the placement of the first layer of bamboo beams into the void that is left between the two bamboo poles that make the column or parallel to them, according to the direction of the columns. The final layer of the roof consists of bamboo tubes of small diameters. 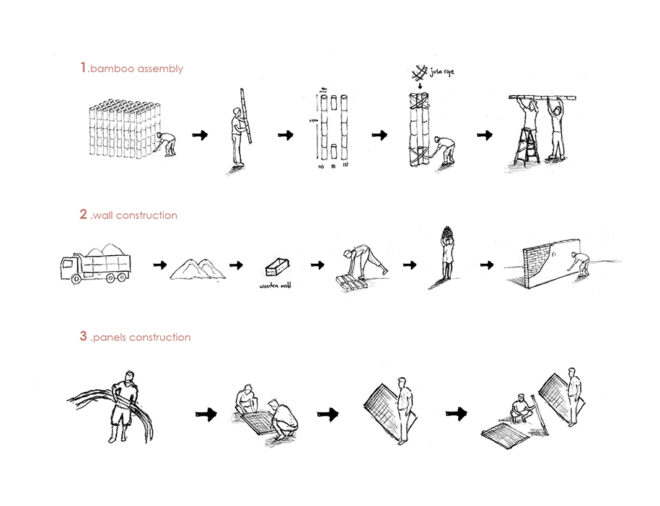 Afterwards, when the construction of the columns and the roof is finished, the walls are built. They are constructed of clay bricks and are put between the bamboo columns. 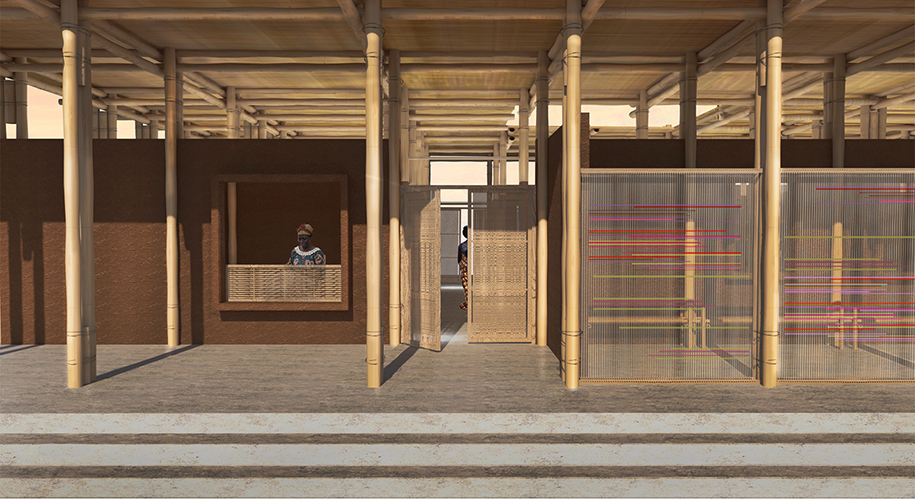 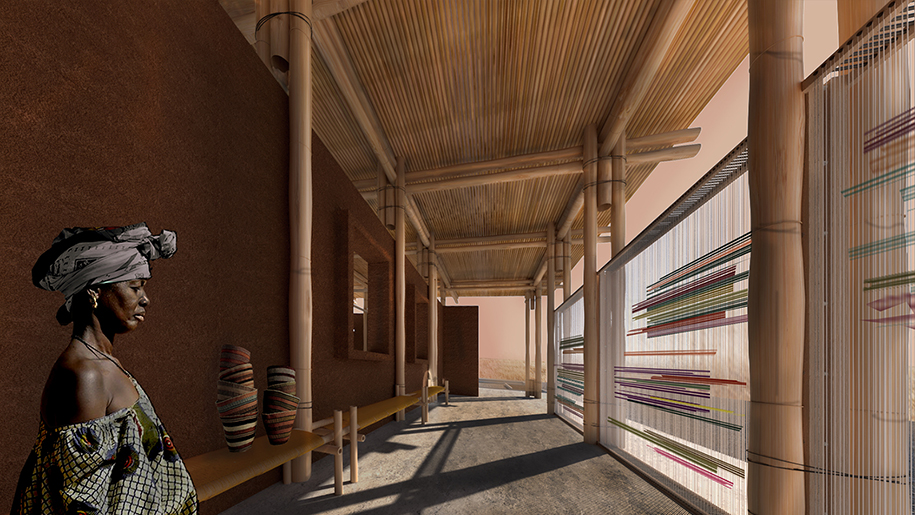 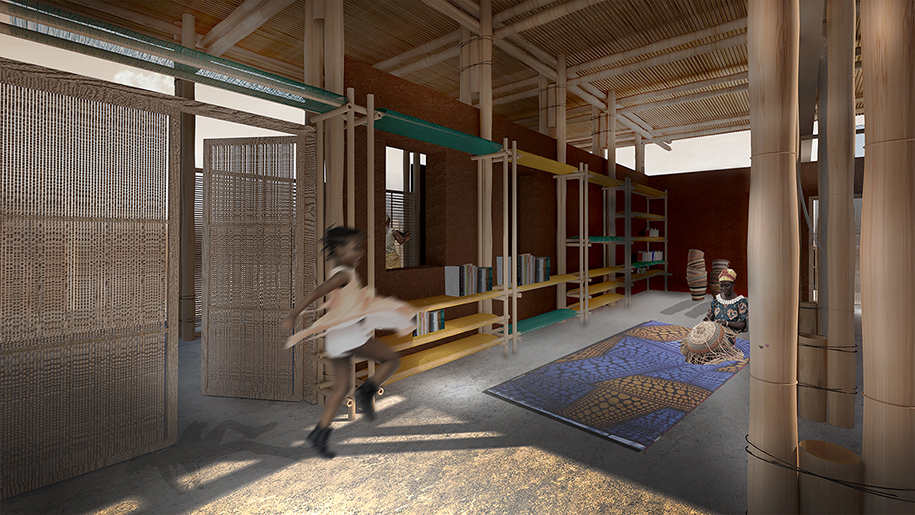 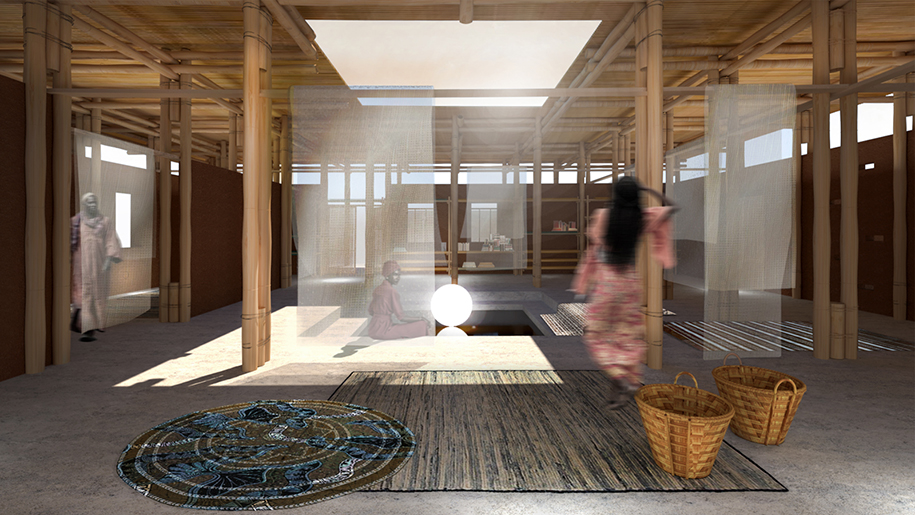 Student Residential Compound: phase B' of the University of Cyprus | alias architects - Liakopoulos I Buchholz I Associates

by ANGELIKI ASIMAKOPOULOUArchisearchhttps://www.archisearch.gr/wp-content/uploads/R2-370x700.jpg
SHARE THIS PAGE
WITH YOUR FRIENDS