One hundred years after the founding of Bauhaus, it’s time to revisit bauhaus journal as significant written
testimony of this iconic movement of modern art.
-images and texts kindly provided by Lars Müller Publishers

Among the great number of books and articles that have appeared on the occasion of the Bauhaus centenary, and which testify to the continuing exploration and analysis of the school, the publication of a high-quality fascimile of the bauhaus journal represents a particularly valuable contribution that is able to inspire today’s readers. All the more so because it is accompanied for the first time by an English translation and is therefore able to reach an international audience, making the original, Bauhaus publication accessible not only to a German-speaking readership as a key primary source and reference work.

Bauhaus journal served as an important medium through which the movement communicated its image and identity, as well as thoughts and questions.

Published under the three successive directors of Bauhaus, Walter Gropius, Hannes Meyer and Ludwig Mies van der Rohe, and by a series of different editors (including Oskar Schlemmer,Ernst Kallai and Josef Albers) and designers (László Moholy-Nagy, Herbert Bayer and Joost Schmidt), the journal offers an insight into the Bauhaus artistic and political stances and controversies.

As Lars Müller publishers explain “The aim of this fascimile of the bauhaus journal is to better understand the roots of the twentieth-century avant-garde and the premises of modernism in order to be able to challenge and, if necessary, to overcome them.”

A century after its founding, the German school of art and architecture remains one of the most influential movements of the Modernist age. The Bauhaus movement championed a mix of raftsmanship with the arts in the service of architecture as well as a geometric, abstract style and no historical nods, and its aesthetic continues to influence architects, designers and artists until today. 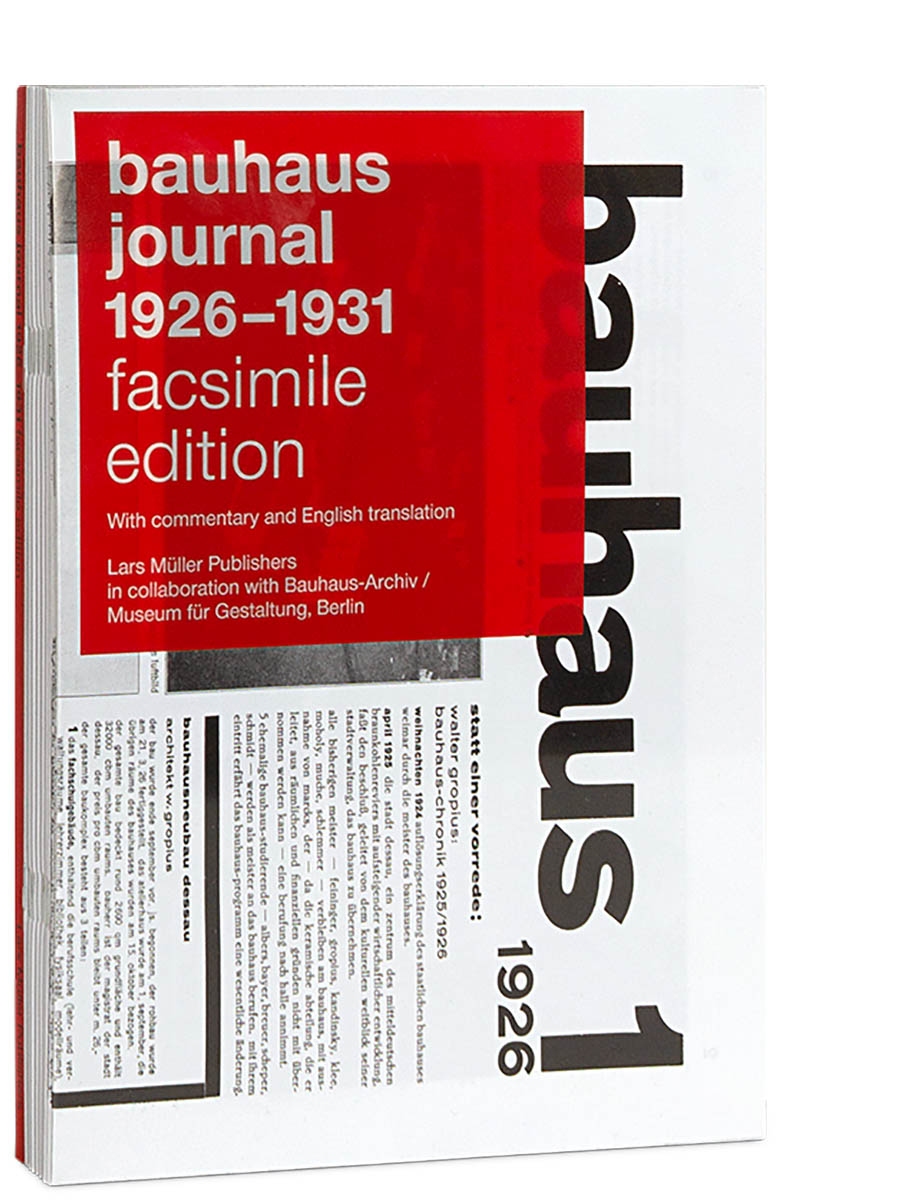 In this journal, published annually from 1926 to 1931, the most important voices of the movement are heard: masters of the Bauhaus, among others, Josef Albers, Walter Gropius, Wassily Kandinsky, Paul Klee, László Moholy-Nagy, and Oskar Schlemmer, as well as Herbert Bayer, Marcel Breuer, Ludwig Mies van der Rohe, Gerrit Rietveld, and many more.

The masters of the Bauhaus address the developments in and around the Bauhaus, the methods and focal points of their own teaching, and current projects of students and masters.

At the time primarily addressed to the members of the “circle of friends of the bauhaus,” the journal published by Gropius and Moholy-Nagy makes tangible the authentic voice of this mouthpiece of the avant-garde. The facsimile reprint is intended to give new impetus to international discussion and research on the Bauhaus, its theories and designs.

The exact replica of all individual issues are accompanied by a commentary booklet including an overview of the content, an English translation of all texts, and a scholarly essay which places the journal in its historical context. 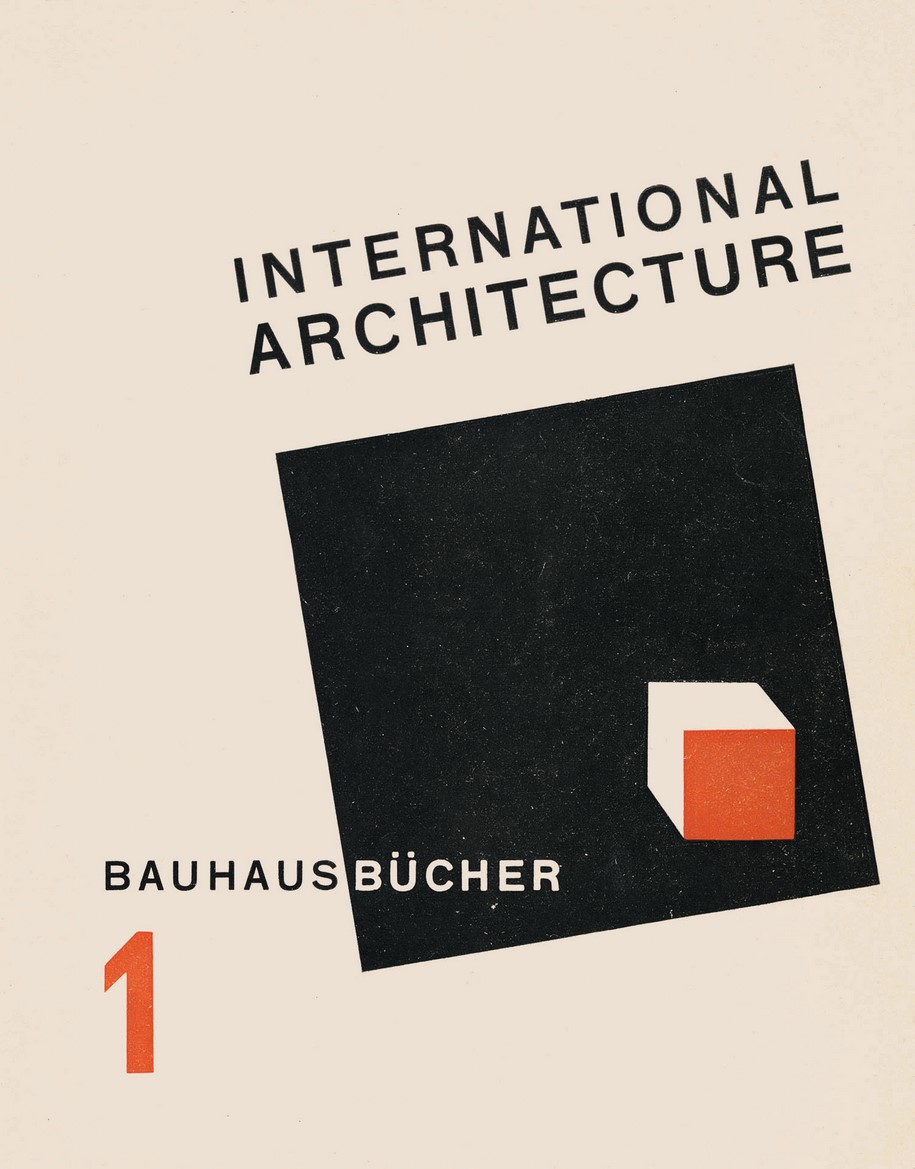 Walter Gropius, Bauhausbücher 1: INTERNATIONAL ARCHITECTURE
When the Bauhaus moved to Dessau in 1924, it was finally possible to publish the first of the Bauhausbücher that Walter Gropius (1883–1969) and Làszlò Moholy-Nagy (1895–1946) had first conceived of in Weimar. The series was intended to give insight into the teachings of the Bauhaus and the possibilities it offered for incorporating modern design into everyday aspects of an ever-more-modern world. First in the series was Gropius’ International Architecture, an overview of the modern architecture of the mid-1920s and an early attempt to articulate what would come to be known as International Style architecture. In a brief preface, Gropius summarized the guiding principles he identified uniting the avant-garde around the world. But the real thrust of the book is visual, with an extensive illustrated section showing buildings in Europe and the Americas. According to Gropius, these illustrations show the “development of a consistent worldview” that dispensed with the prior decorative role of architecture and expressed itself in a new language of exactitude, functionality and geometry. 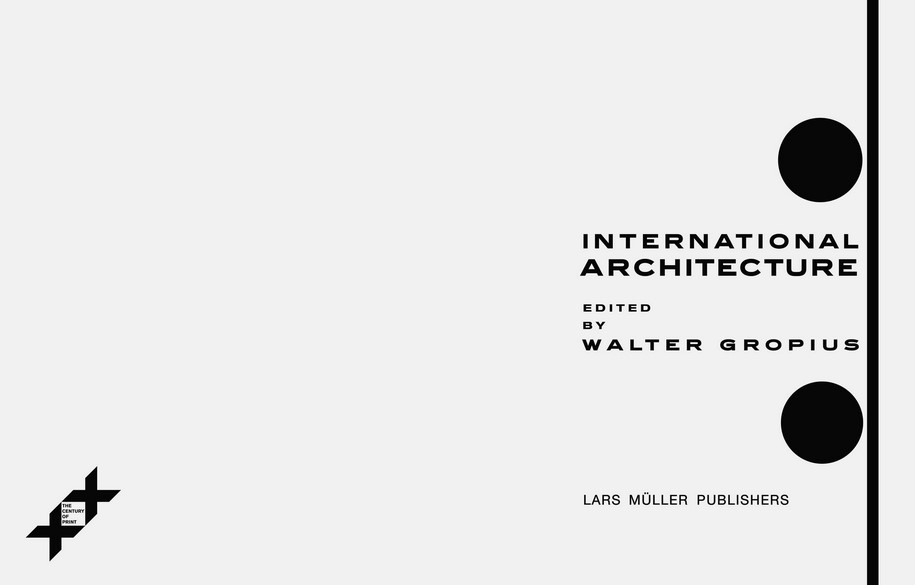 In what he called his “illustrated guide to modern architecture,” which starts off the Bauhausbücher series,
Gropius gives an overview of the international architecture of the mid-1920s. A preface by the author explores,
briefly but in detail, the guiding principles that unite the avant-garde in all countries. This statement is followed
by an extensive illustrated section showing examples of architecture from around the world. According to Gropius, these illustrations bear witness to the “development of a consistent worldview” that disposes of the
prior role of the architect and expresses itself in a new language of shapes. 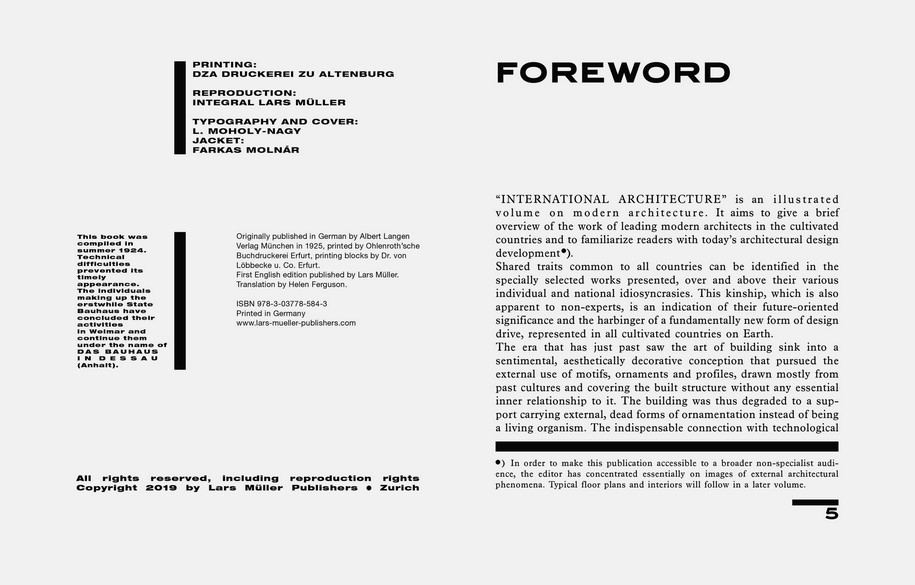 This first English edition of Volume 1 of the Bauhausbücher allows the reader to broaden his or her view of German architectural history by placing the achievements of the Bauhaus in an international context and by documenting and capturing its philosophy of reform in an illustrative way. 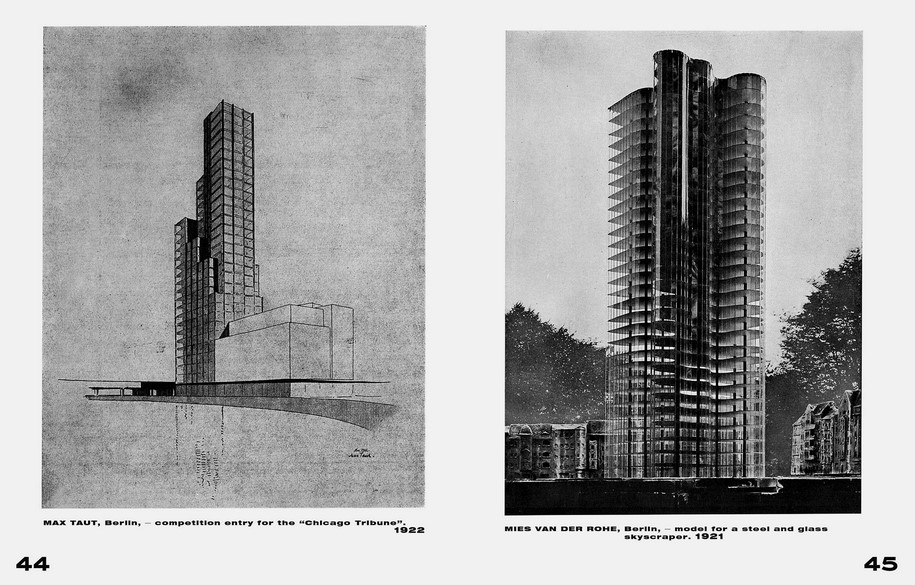 Walter Gropius (1888–1969) was the founder of the Bauhaus and a pioneer of modern architecture. In 1919, he
was appointed to succeed Henry van de Velde as director of the School of Visual Arts in Weimar, which he
renamed “Staatliches Bauhaus in Weimar”. In 1924, the Bauhaus moved to Dessau; Gropius designed the
school building and the masters’ houses for the new location. In 1928, Gropius passed on the title of director
to Swiss architect Hannes Meyer and became a self-employed architect in Berlin before emigrating to the
United States in 1934. As a professor of architecture, he taught at Harvard University in Cambridge,
Massachusetts, where he founded The Architects’ Collaborative in 1941.

Paul Klee, Bauhausbücher 2: PEDAGOGICAL SKETCHBOOK
Active at the Bauhaus between 1920 and 1931, teaching in the bookbinding, stained glass and mural-painting
workshops, Paul Klee (1879–1940) brought his expressive blend of color and line to the school—and, with the
second volume in the Bauhausbücher series, beyond its walls.

Evincing a desire to reunite artistic design and craft, and written in a tone that oscillates
between the seeming objectivity of the diagram, the rhetoric of science and mathematics, and an abstract,
quasi-mystical intuition, Klee’s text expresses key aspects of the Bauhaus’ pedagogy and guiding
philosophies. And while Klee’s method is deeply personal, in the context of the fundamentally multivocal
Bauhaus, his individual approach to abstract form is typical in its idiosyncrasy.

In this book, Paul Klee presents his own theory about the relationships between line, shape, surface, and color in the visual space.

In the present volume, the 1953 English translation by Sibyl Moholy-Nagy is combined with the design and
physical qualities of the original German edition from 1925.


Paul Klee (1879–1940) was a German painter and graphic artist. Prior to his influential work at the Bauhaus, he
was a member of the artists’ group Der Blaue Reiter. In 1914, while still working primarily as a draftsman and
graphic artist, he traveled to Tunis with two fellow artists; their journey is considered by art historians to be a
key event in German modern art. It was this journey that enabled Klee’s international breakthrough as a
painter. From 1920 to 1931, Klee was active at the Bauhaus until offered a professorship at the Art Academy in
Düsseldorf. After Hitler took power, Klee and his family emigrated to Bern. In 1937, numerous works of his
were displayed at the Degenerate Art exhibition, then confiscated and sold abroad. In 1940, about four months
prior to Klee’s death, the Kunsthaus Zürich hosted an anniversary exhibition of the artist’s later works. Paul
Klee’s extensive oeuvre and his writings on art theory make him one of the most important practitioners of
20th-century early modern art. 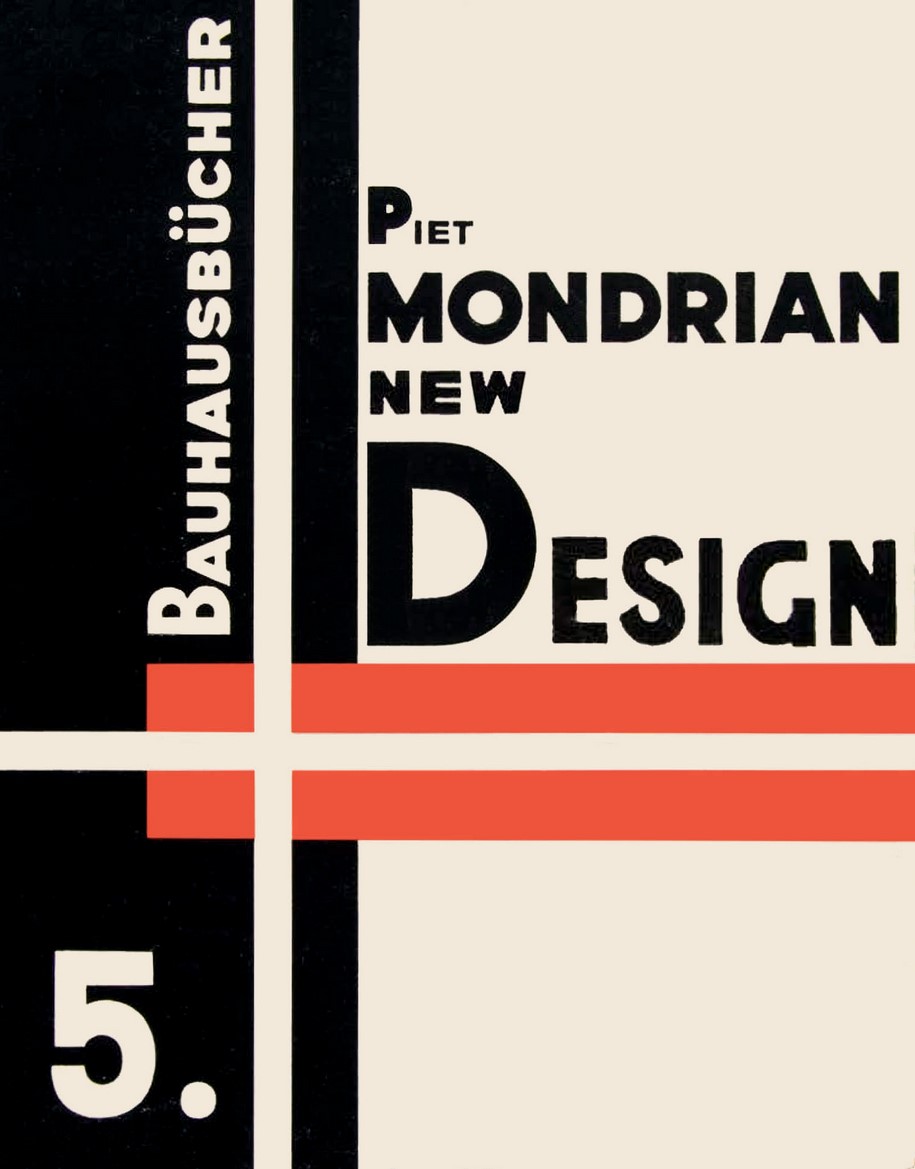 Piet Mondrian, Bauhausbücher 5:  NEW DESIGN
Although Piet Mondrian was not an active member of the Bauhaus, his name is often mentioned in connection
with the art school. Starting with a philosophical foray in which he describes art as a figurative expression of
human existence, Mondrian embeds his concept of a New Design in the various forms of artistic expression. 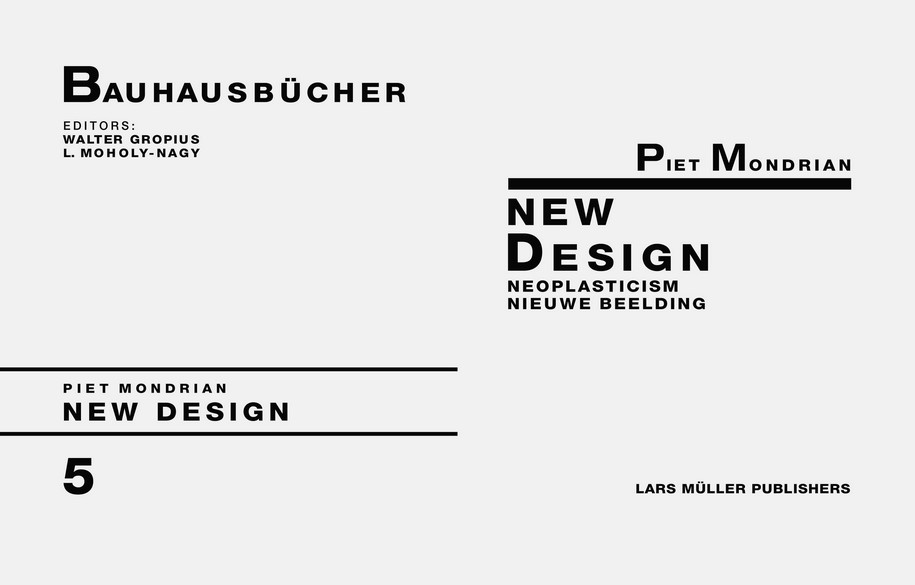 He looks into the question of whether there is a prevailing hierarchy between painting and architecture and
dares to take a far-reaching look at the future of neoplasticism.
This complete English edition appears in original design and with separate commentary. 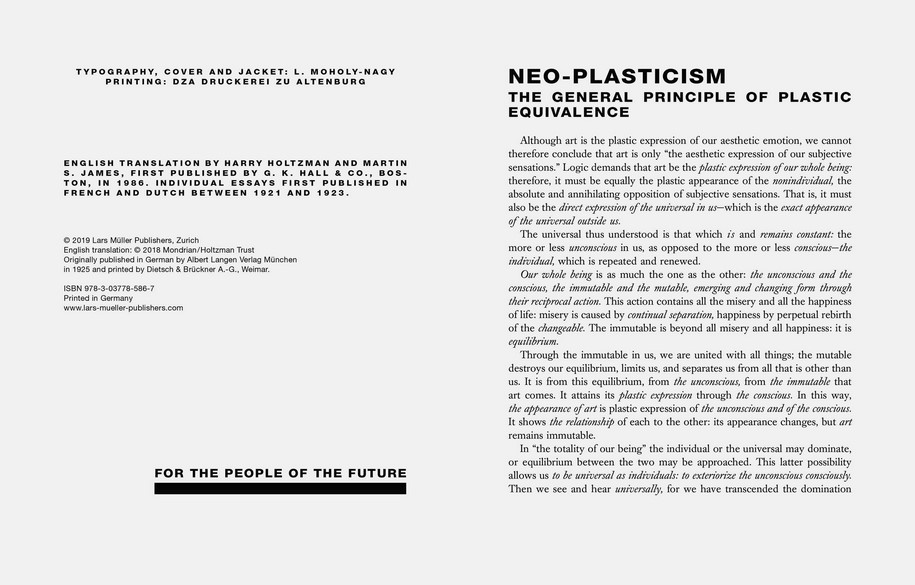 Piet Mondrian (1872–1944) was a Dutch painter who became known internationally as the founder of the De
Stijl artistic movement. Prior to touting neoplasticism in his writings on art theory, Mondrian encountered
cubism in Paris, his adopted home, which had a significant effect on his artistic work. His firm conviction of
abstract painting continued even after he emigrated to the United States in 1940, leading him to join the
American Abstract Artists in New York. Almost until his death, Mondrian continued to publish essays on art
theory in which he dealt intensively with neoplasticism and abstraction in painting. 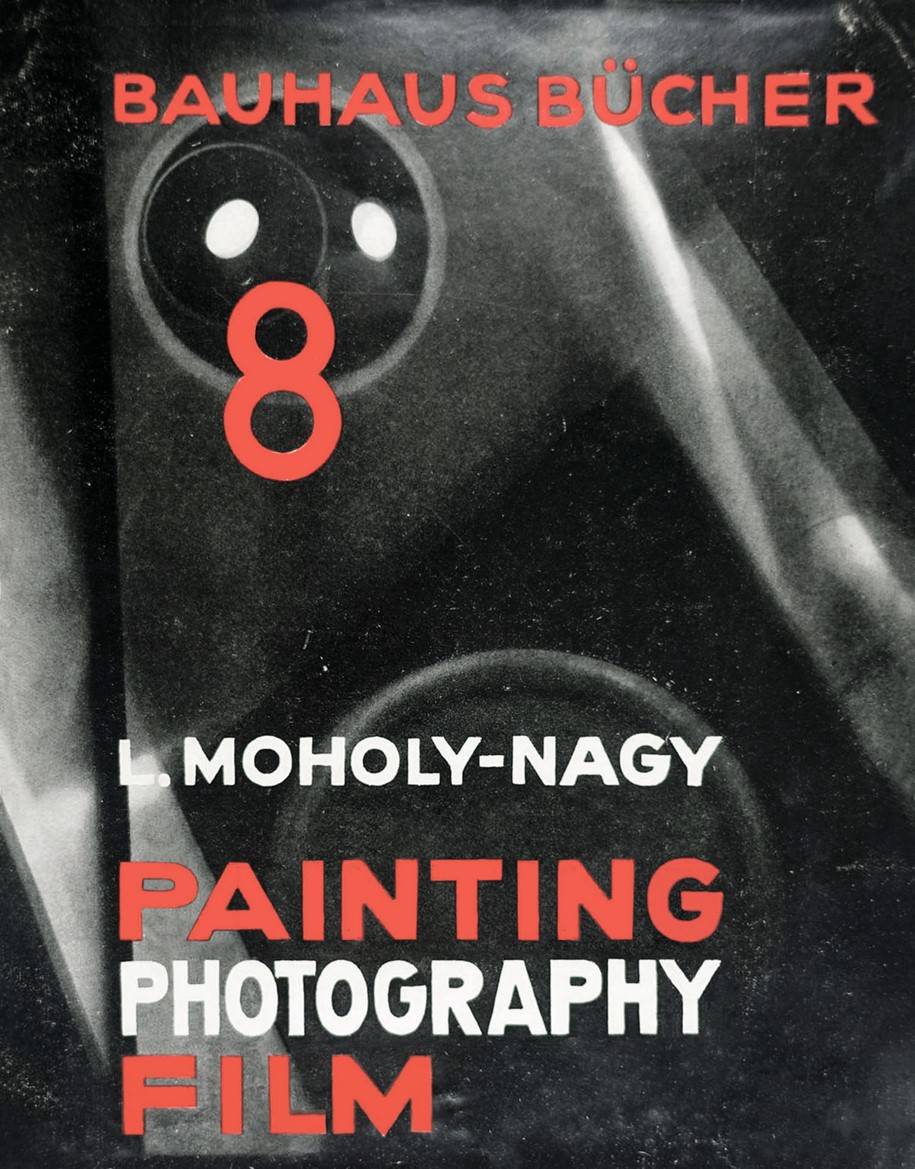 László Moholy-Nagy, Bauhausbücher 8: PAINTING, PHOTOGRAPHY, FILM
Moholy-Nagy’s efforts to have photography and filmmaking recognized as means of artistic design on the
same level as painting are propounded and explained at length. The use of artistic instruments is thus radically
reformed. 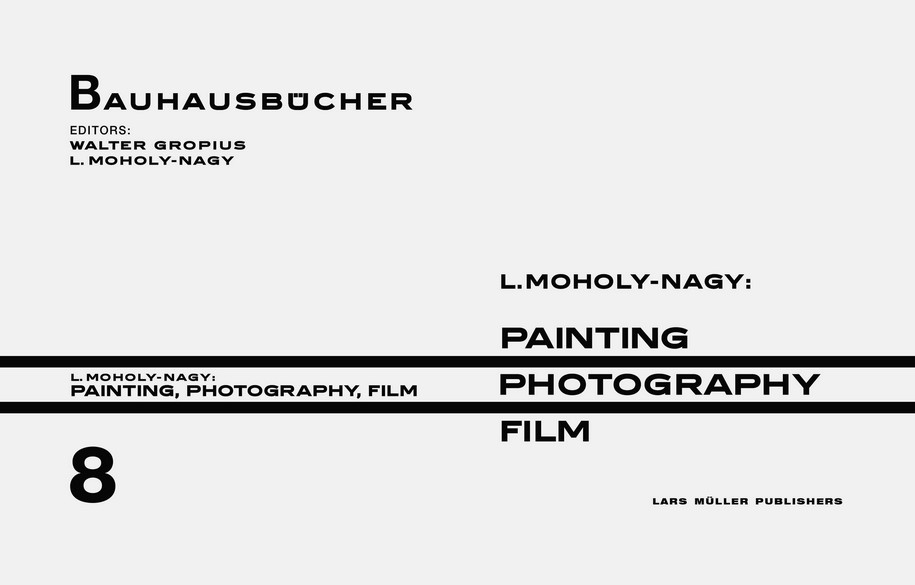 The Hungarian artist makes the case for a functional transformation within the visual arts and for the further development of photographic design options. 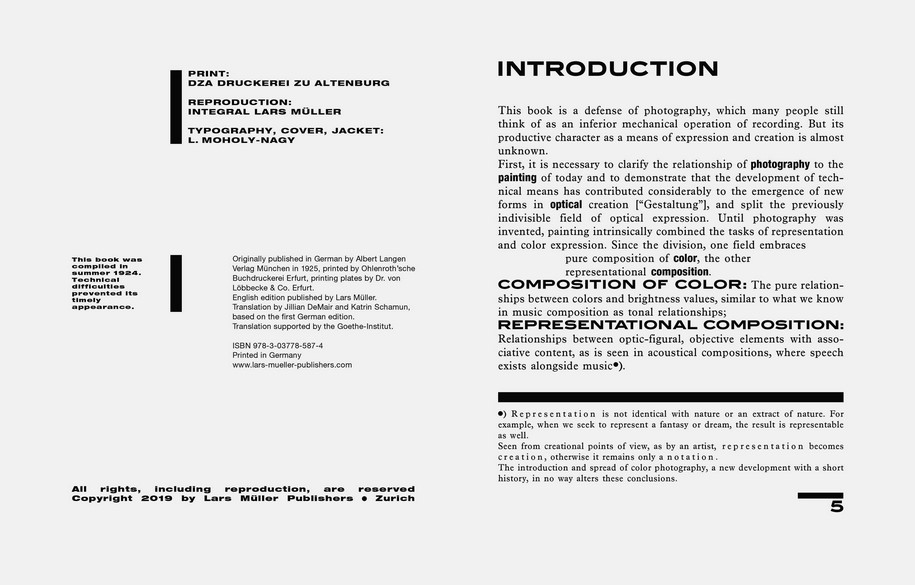 Alongside theoretical and technical approaches as well as detailed forays into the broad field of the medium of
photography, Moholy-Nagy uses an extensive appendix of illustrations to provide a thorough survey of the
numerous possibilities that photographic and cinematic work had in store as early as 1925. 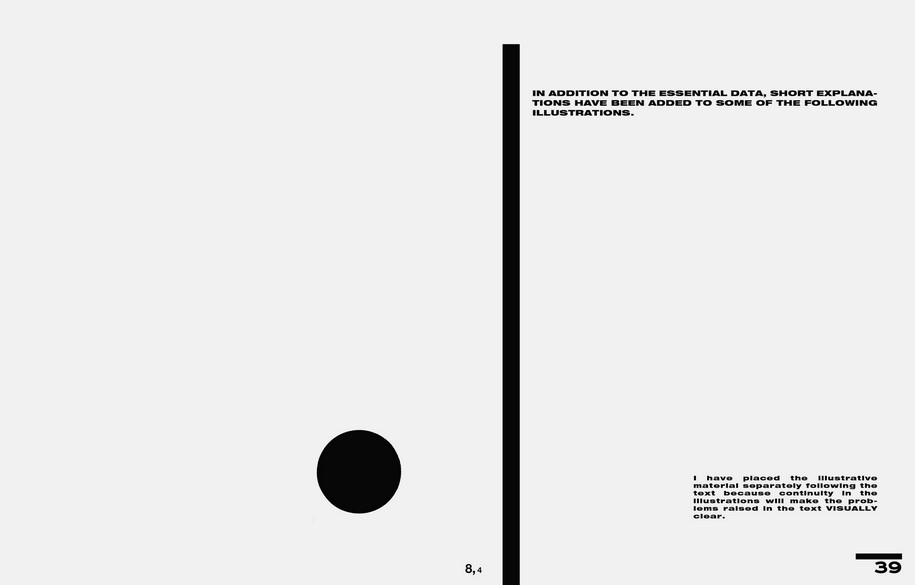 László Moholy-Nagy was born in southern Hungary in 1895. After unfinished law studies and military service
during the First World War, he attended an evening art school, which marked the beginning of his career as an
artist. During his first artistic years his style of art was much influenced and shifted from the figurative to a
short Dadaist phase before it became completely abstract. His earlier paintings, which were strongly
influenced by Russian Constructivism, already illustrate his life-long preoccupation with light and transparency.
Around 1922 Moholy-Nagy became aware of the photogram and the artistic potential of the motion picture,
which fascinated him for the rest of his life. When he moved to Berlin two years later, he met Walter Gropius,
director of the Bauhaus, who visited Moholy-Nagy’s exhibition at the avant-garde art gallery Der Sturm. He
appointed Moholy-Nagy as a teacher at the art school in Weimar in March 1923. The artist remained loyal to
the Bauhaus even after its move to Dessau, before he finally left it in 1928. 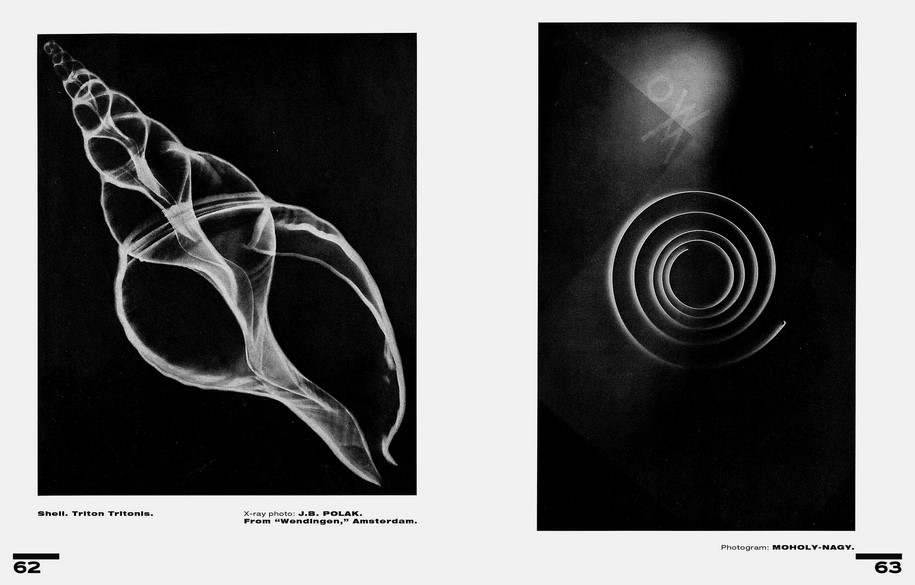 by MELINA ARVANITI-POLLATOUArchisearchhttps://www.archisearch.gr/wp-content/uploads/bureau-de-change-Slab_5-1-370x700.jpg
SHARE THIS PAGE
WITH YOUR FRIENDS