Beyer Blinder Belle is responsible for renovating the terminal, while Lubrano Ciavarra Architects are designing the two new buildings. Stonehill Taylor is the exclusive interior designer for the 512 rooms, housed in the two newly built wings.
Morse Development is developing the site along with MCR, which operates middle-to-budget hotels in the United States. Upon opening, the hotel is expected to be the only hotel operating within the boundaries of JFK Airport.
The newly designed TWA Hotel at JFK International Airport maintains the integrity and legacy of the 1962 structure designed by Eero Saarinen.

Built by world-renowned architect Eero Saarinen, the TWA Flight Center opened in 1962 ushering in a new era of jet air travel. Unable to support the size of modern aircraft, the terminal was closed in 2001 and has remained dark for the last 16 years. The Terminal was designated a NYC Landmark in 1994 and listed on the National Register of Historic Places and the New York State Register of Historic Places in 2005. 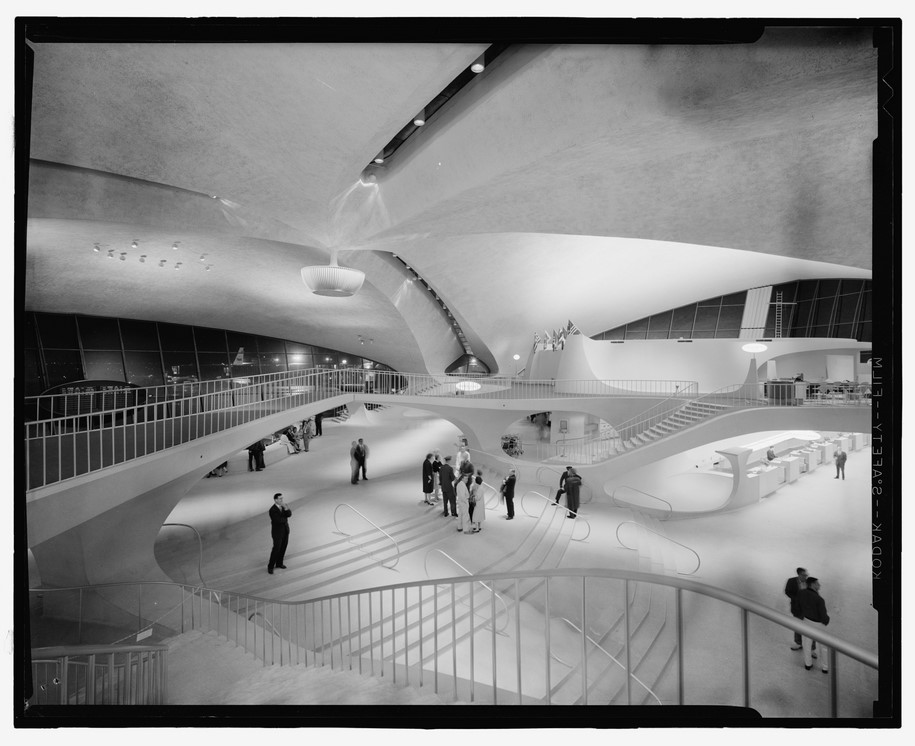 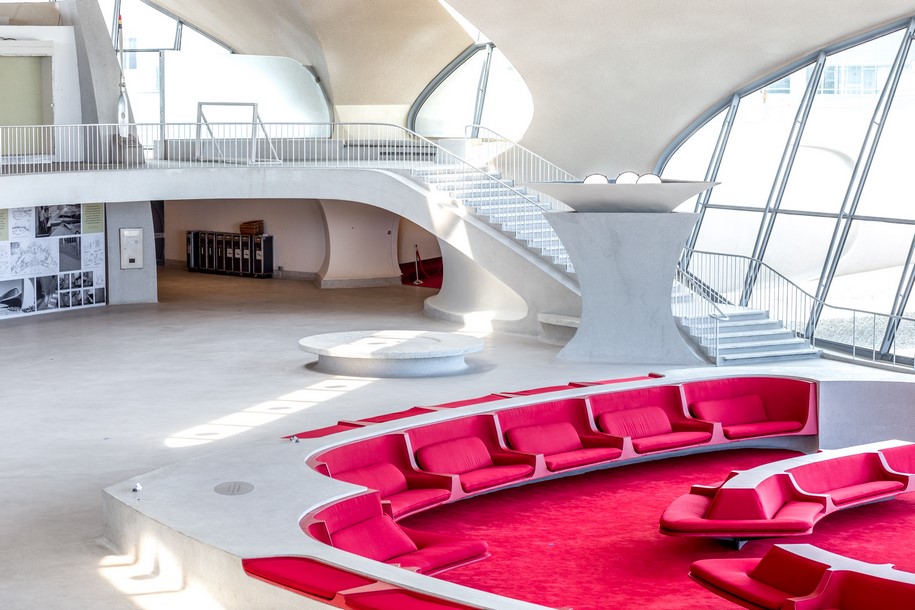 Closed to the public since 2001, Eero Saarinen’s internationally-revered Midcentury Modern landmark is ushered into a new life, mirroring its 1962 design aesthetic and delivering an on-site airport hotel to New York’s premier international gateway.

Dark since 2001, Eero Saarinen’s landmark has undergone many stages of construction in preparation for its bright future as a hotel.

The TWA Flight Center Hotel at JFK International Airport will preserve the iconic Eero Saarinen terminal, restoring the landmark to its Jet Age splendor for generations to enjoy. Designed to defer to the landmark, the new hotel structures will be set back from the terminal.

Vacant for over 15 years, the restored Flight Center will serve as the lobby for the hotel, and the cornerstone for the restaurant and conference complex.

Lubrano Ciavarra Architects’ design for the new TWA Hotel at JFK International Airport creates a deferential yet complementary backdrop to the iconic, sculptural masterpiece by Eero Saarinen built in 1962.

Neighboring JetBlue’s Terminal 5 and accessible to all airlines, the TWA Flight Center Hotel at JFK International Airport will deliver a world-class airport hotel to New York, with 505 guestrooms including 483 rooms and 22 suites.

Two new wings located behind the historic Flight Center will house 505 hotel rooms, and a subterranean 40,000 SF conference center will be set between the two TWA connecting tubes. Restaurants, a 10,000-SF public observation deck, retail shops, a rooftop pool and a health club complete the program.

The completely privately funded redevelopment will include 40,000 square feet of conference, event and meeting space and 6-8 food and beverage outlets. The anticipated LEED-certified hotel will also have a 10,000 square foot public observation deck.

The TWA Hotel will officially open 15 May 2019 inside JFK’s former TWA Terminal.

Stonehill Taylor is the exclusive interior designer for the 512 rooms, housed in the two newly built wings designed by architects Beyer Blinder Belle and Lubrano Ciavarra, flanking Eero Saarinen’s iconic TWA Flight Center. Stonehill Taylor was inspired by the year 1962 — it’s the year the Flight Center opened and the first time an American was able to orbit the Earth. At this time, aviation was the promise of the future, and so in many ways, this year signifies the beginning of an era of American strength, optimism and innovation. By offering a modern refuge with a thoughtful, strong sense of design and space, the rooms are meant to make guests feel the same appreciation and excitement for aviation that travelers once felt during the rise of the industry.

The TWA Hotel will be the only hotel within the JFK Airport property, providing both a convenient travelers amenity and an event destination for the metro New York area. Included in the project plans is a museum focusing on the history of TWA, the story of Eero Saarinen and the Midcentury Modern design movement.

The 512 guestrooms will have views on JFK’s runways and the TWA Flight Center. 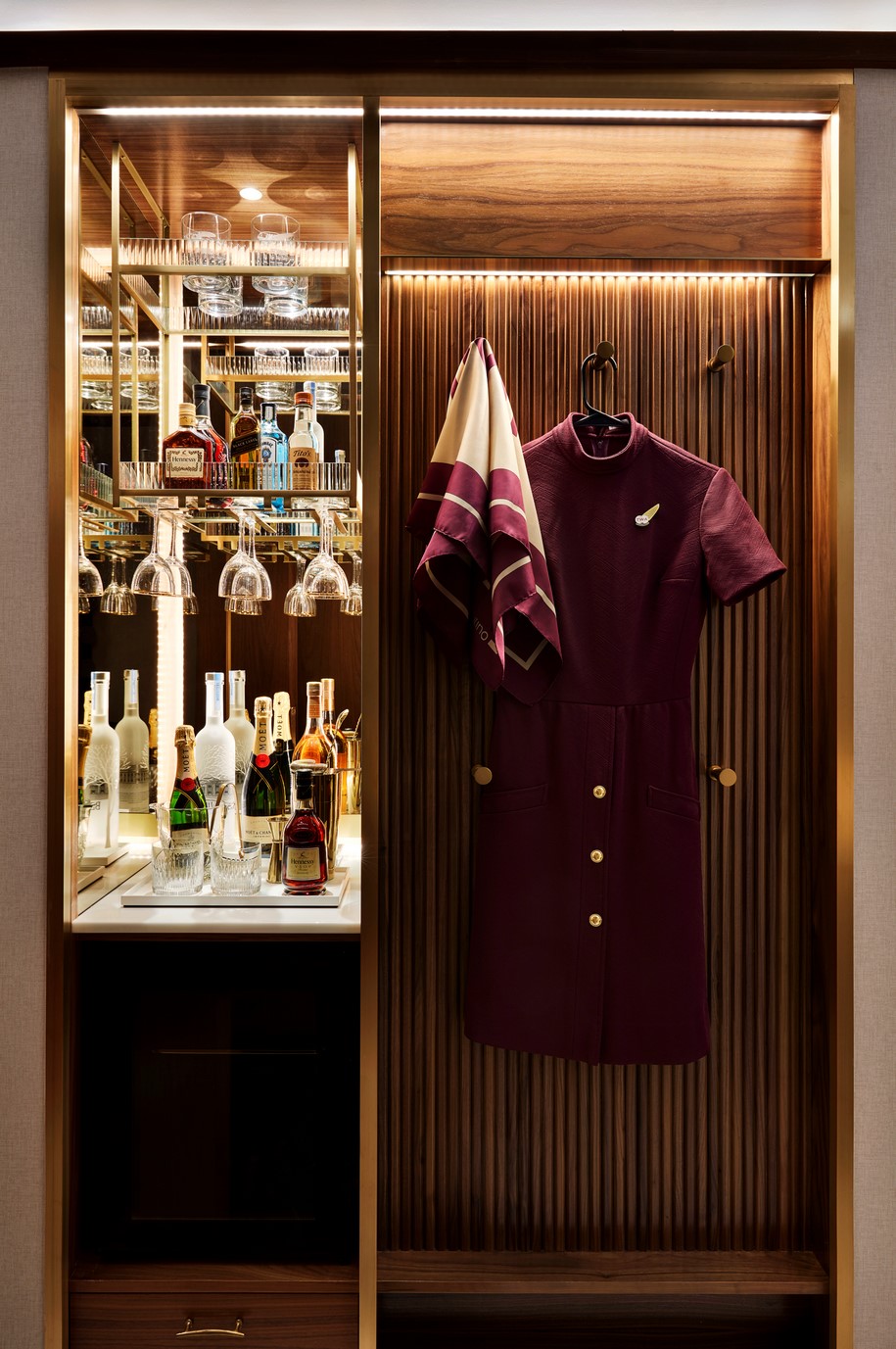 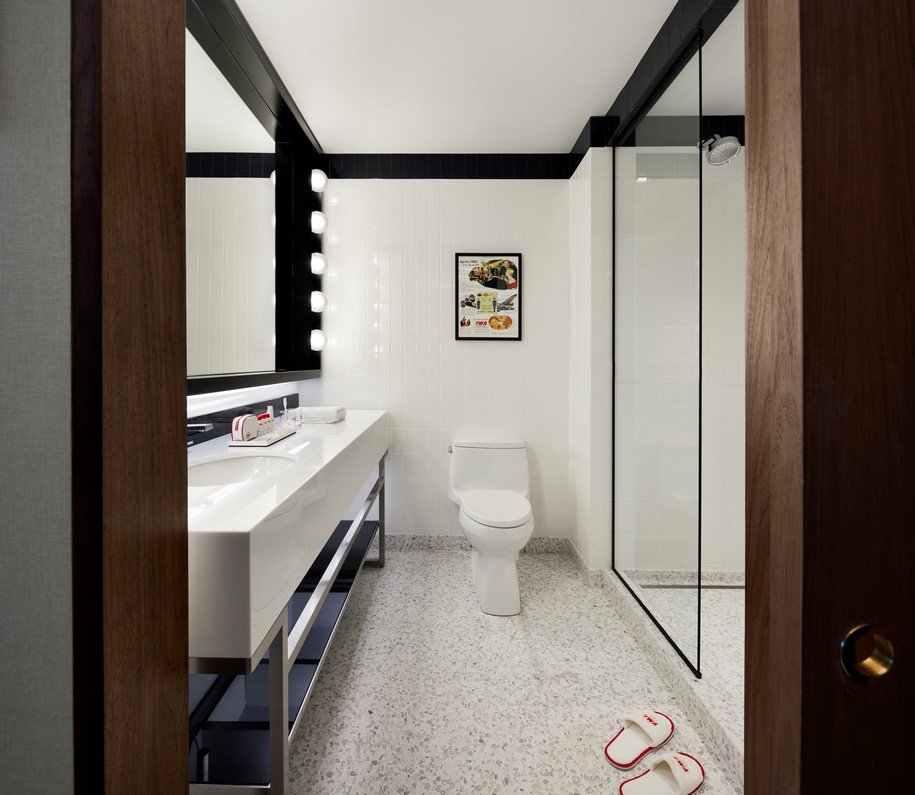 Stonehill Taylor was inspired by the year 1962 — it’s the year the Flight Center opened and the first time an American was able to orbit the Earth.

Lubrano Ciavarra Architects also developed a site strategy that supports and reconstructs the original intent of a limitless sky plane and endless tarmac.

The TWA Hotel will preserve the iconic Saarinen terminal, restoring the landmark to its Jet Age condition for generations.

by MELINA ARVANITI-POLLATOUArchisearchhttps://www.archisearch.gr/wp-content/uploads/ManuelTojalLatinoCoelho0647-370x700.jpg
SHARE THIS PAGE
WITH YOUR FRIENDS