The location, on a small hill, is privileged. The longitudinal field is open to the south and the view of mountain Youhtas. How can a linear residence deal with the intense cretan light? The house necessarily unfolds along the south side, the side of the sun: through a double curvature the building is bend by the power of the sun’s path from east to west. 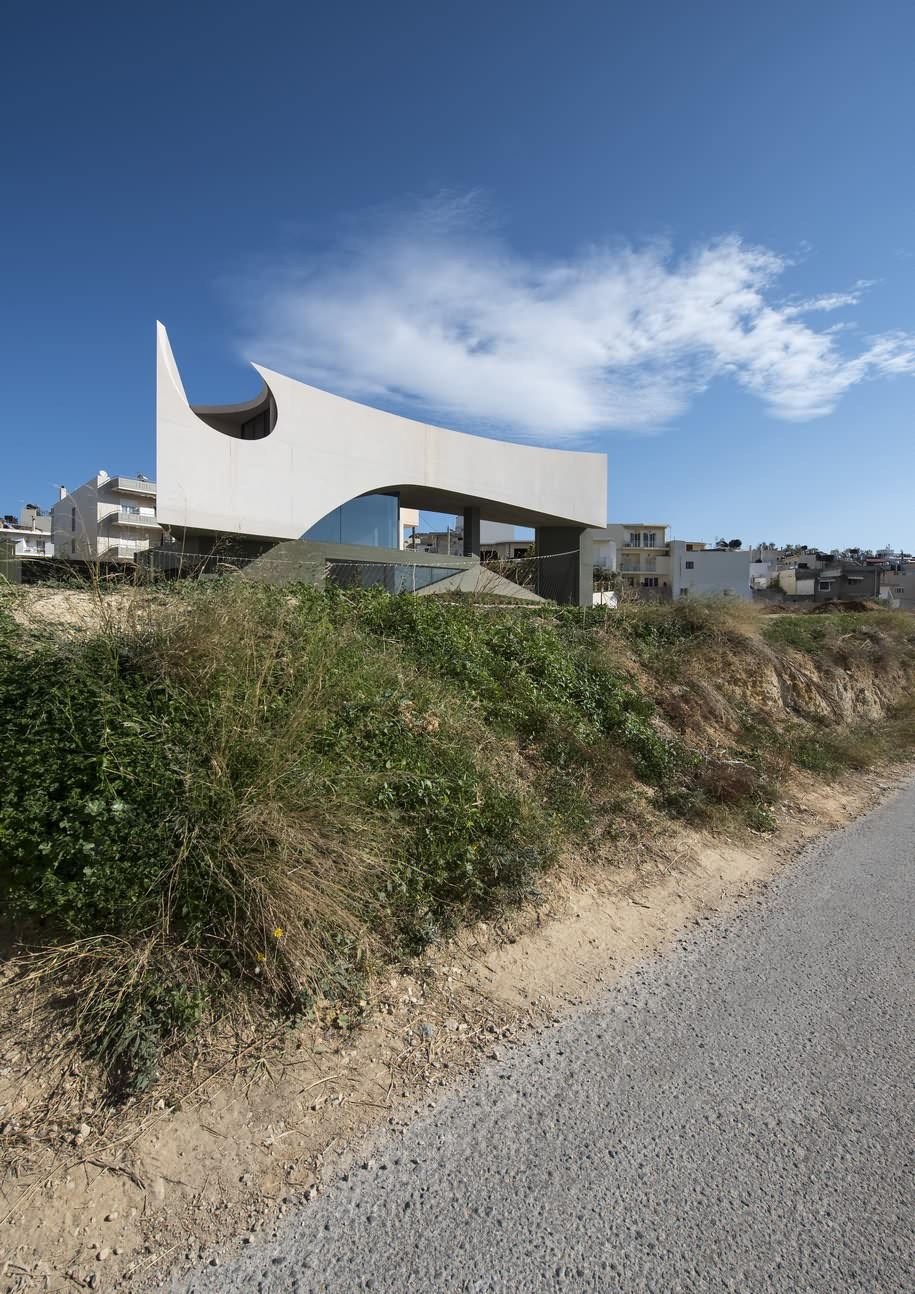 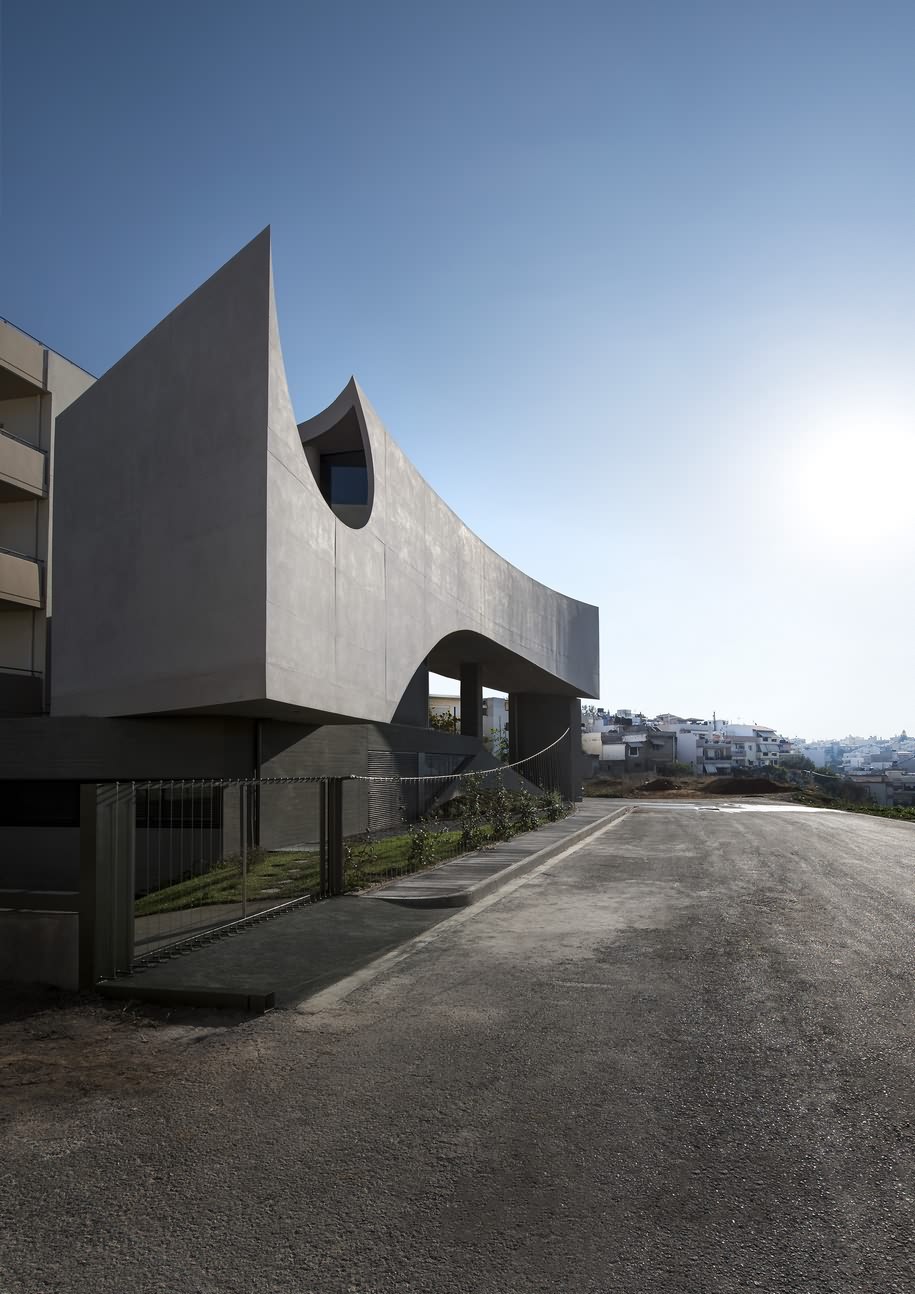 The house is located in a quiet new neighborhood of the Mediterranean city of Heraklion, not far form the city’s center. The flat, elevated corner plot offers views of the city and has a southern orientation. This family house was designed for the needs of a young couple and its two small children. It develops in four levels, hosting the living quarters at the overground floor level and the sleeping quarters at the groundfloor level. 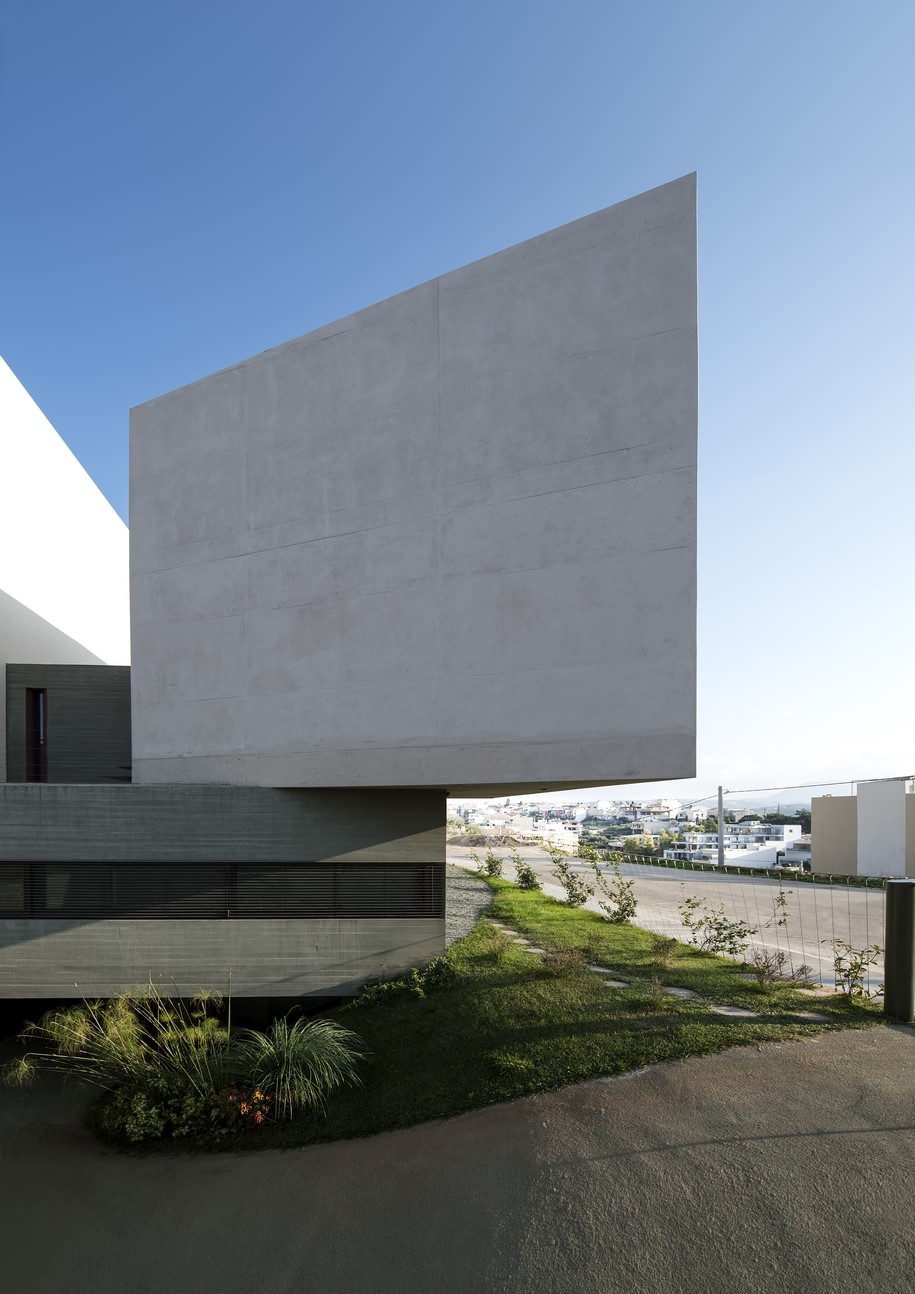 The latter, is open to the garden that is shaded by the main elevated volume which hosts another private bedroom and two open-air spaces excised from its two corners. The fair-faced concrete volume functions as a shelter both for the garden and the subjacent main living space. Its bright color is contrapuntal of the olive-green base that accommodates the other bedrooms -which will eventually be hidden by the climbing plants of the tensed inox-rope fence. 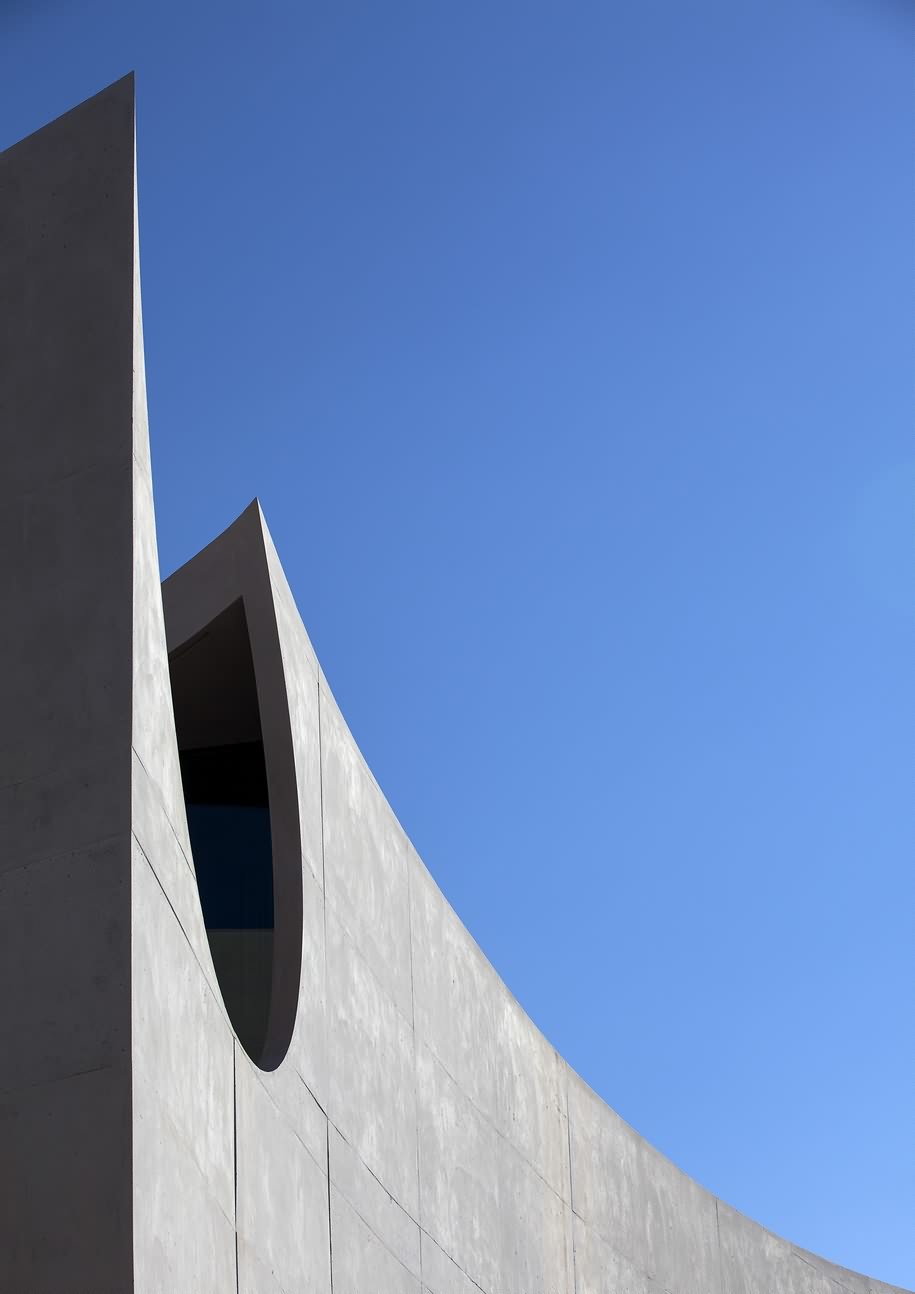 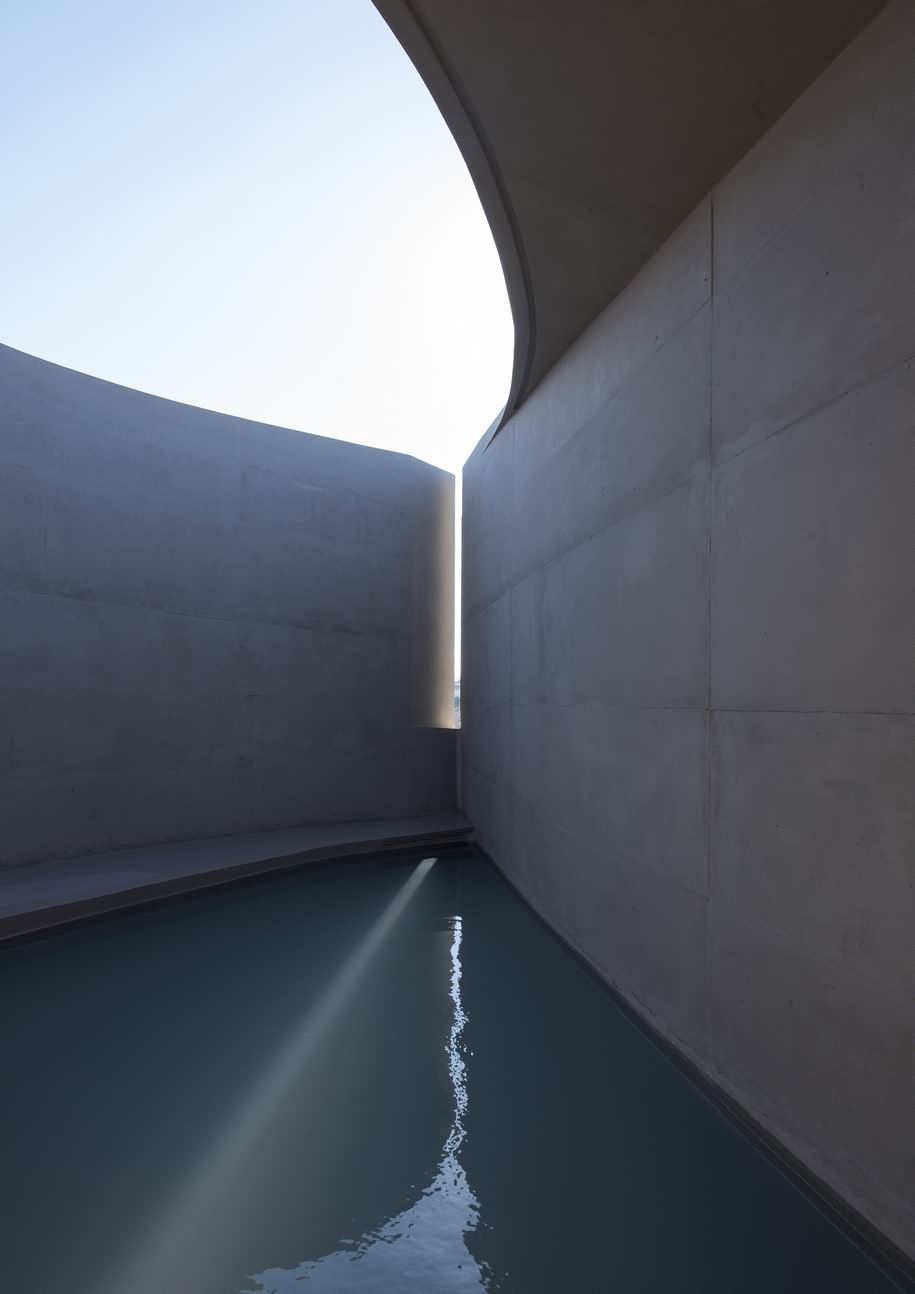 The house is born by its southern, extrovert, cretan field. From the outset, the sculptural gesture arises from this sunny condition: the building is bent by the sun. The elevated concrete facade is without openings, except from an excision at the upper corner which reveals an outdoor space open to western views of the city. The lower curve receives the light at the intermediate main level, incorporating the staircase to the upper floor. 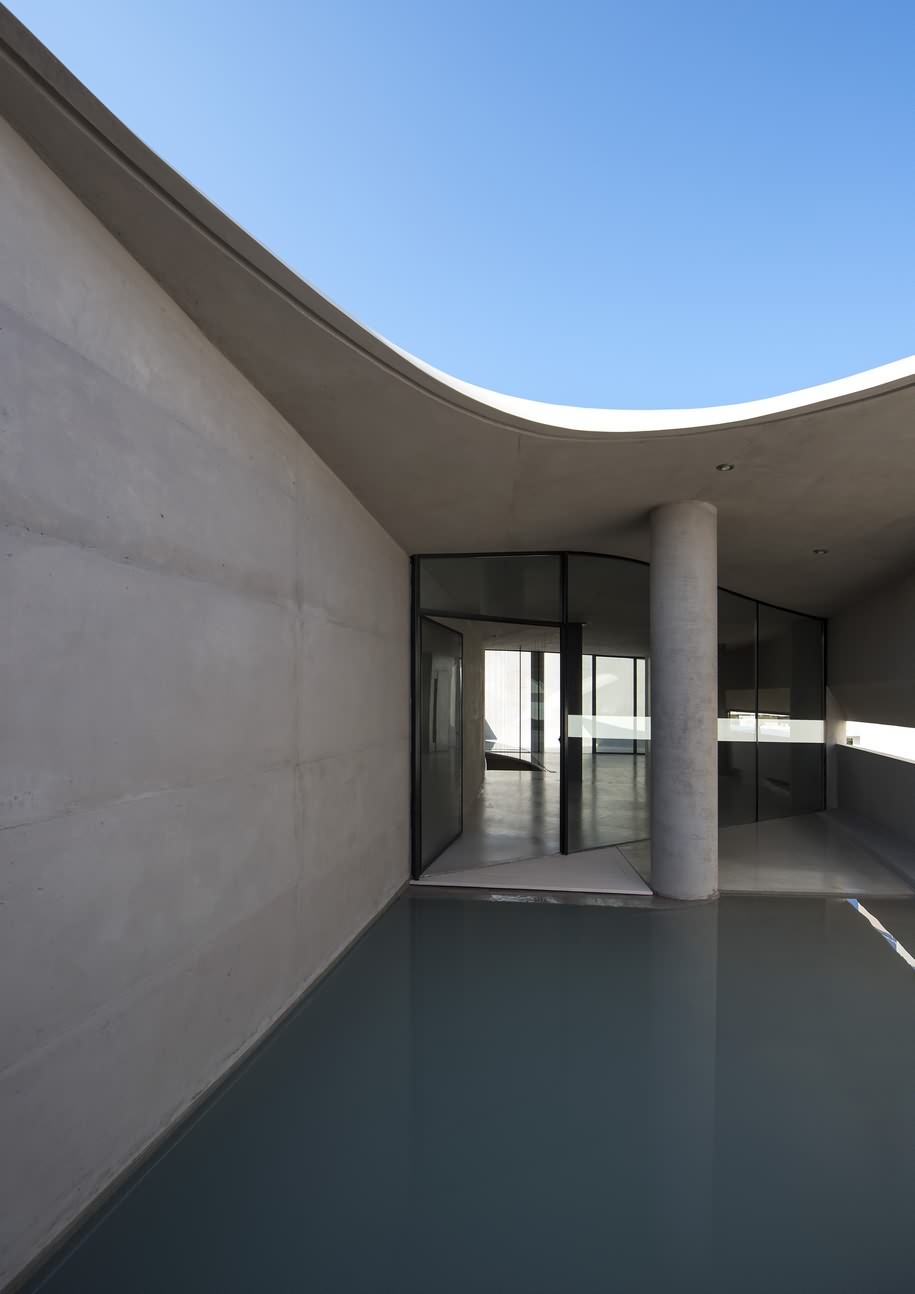 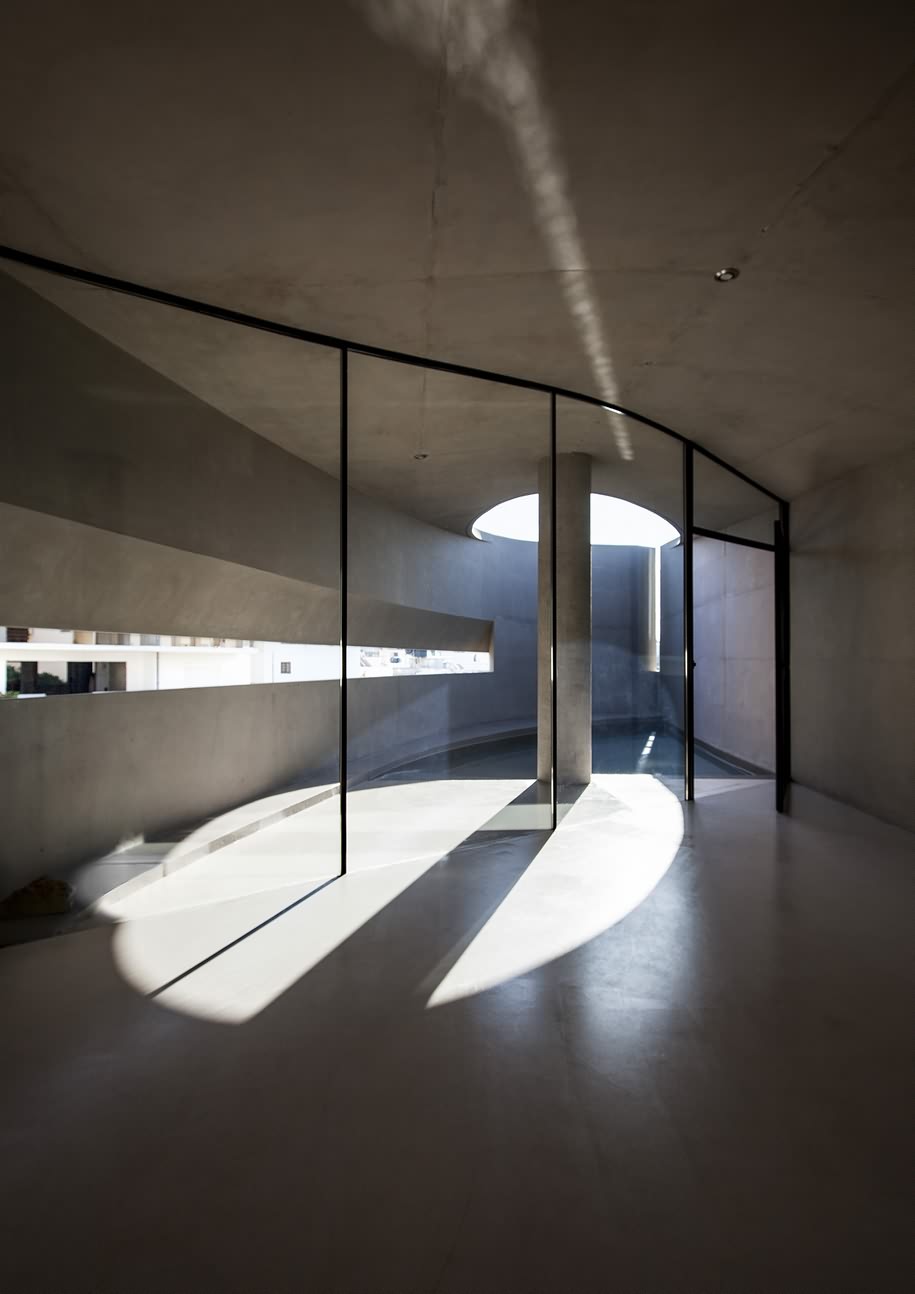 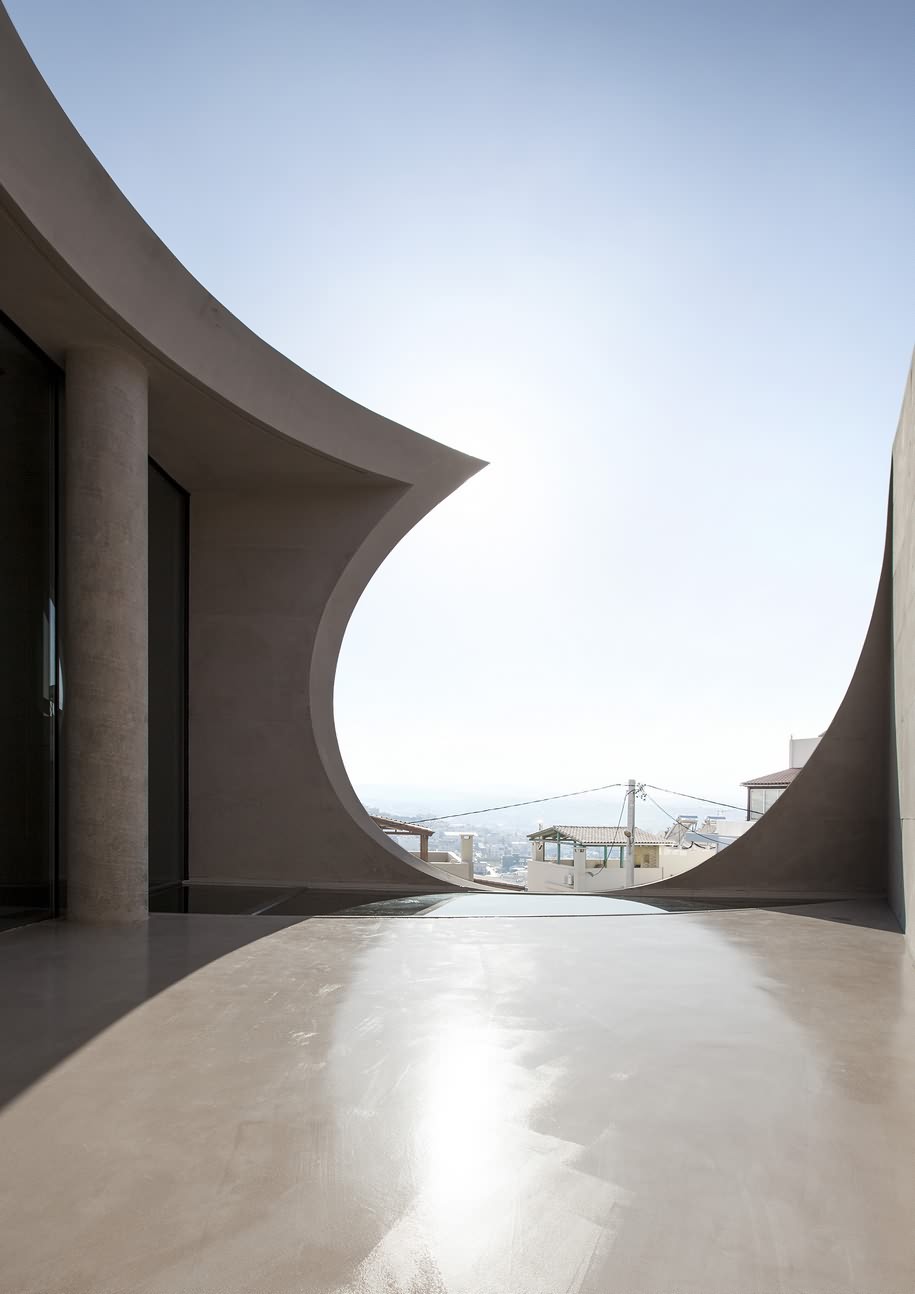 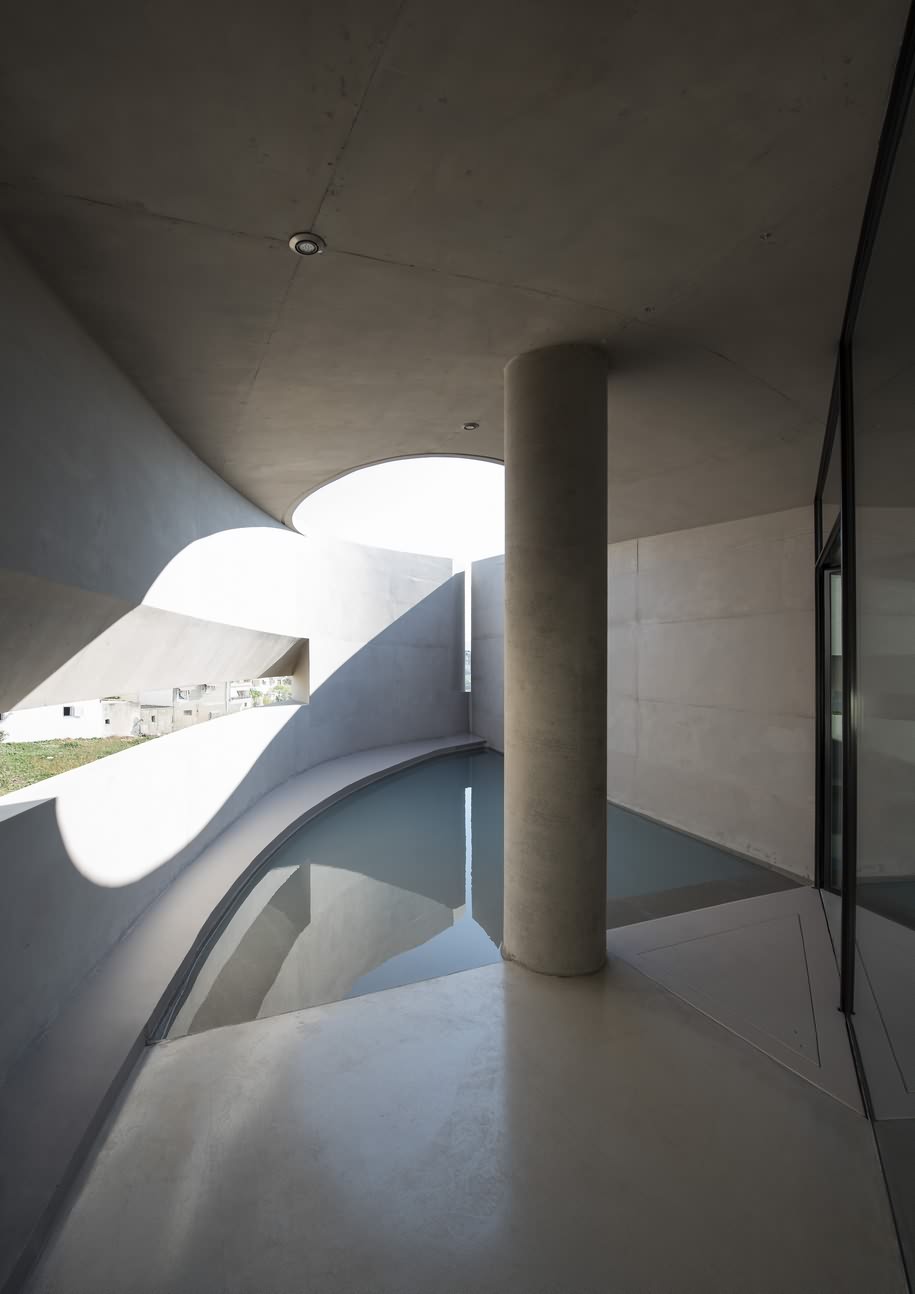 The volume acts not only as a receptor of the private upper premises of relaxation, but also as a shelter for the semi-open expansion of the residence and its garden. Its interior ends in a hidden excision of the roof, at the eastern corner. There, a small pool serves as an outdoor bath. The lower level which is developed as a rigid dark base is also introverted. The handling of curves in this work aims at a tense handling of void and light.

Thus, a successive interpenetration of closed, semi-open and open-air spaces is created: The house is curved, twisted, excised, following the field’s forces -natural or urban. The essentially playful façade seems to enjoy the contrapuntal complicity of its neighboring mass-produced apartment blocks. 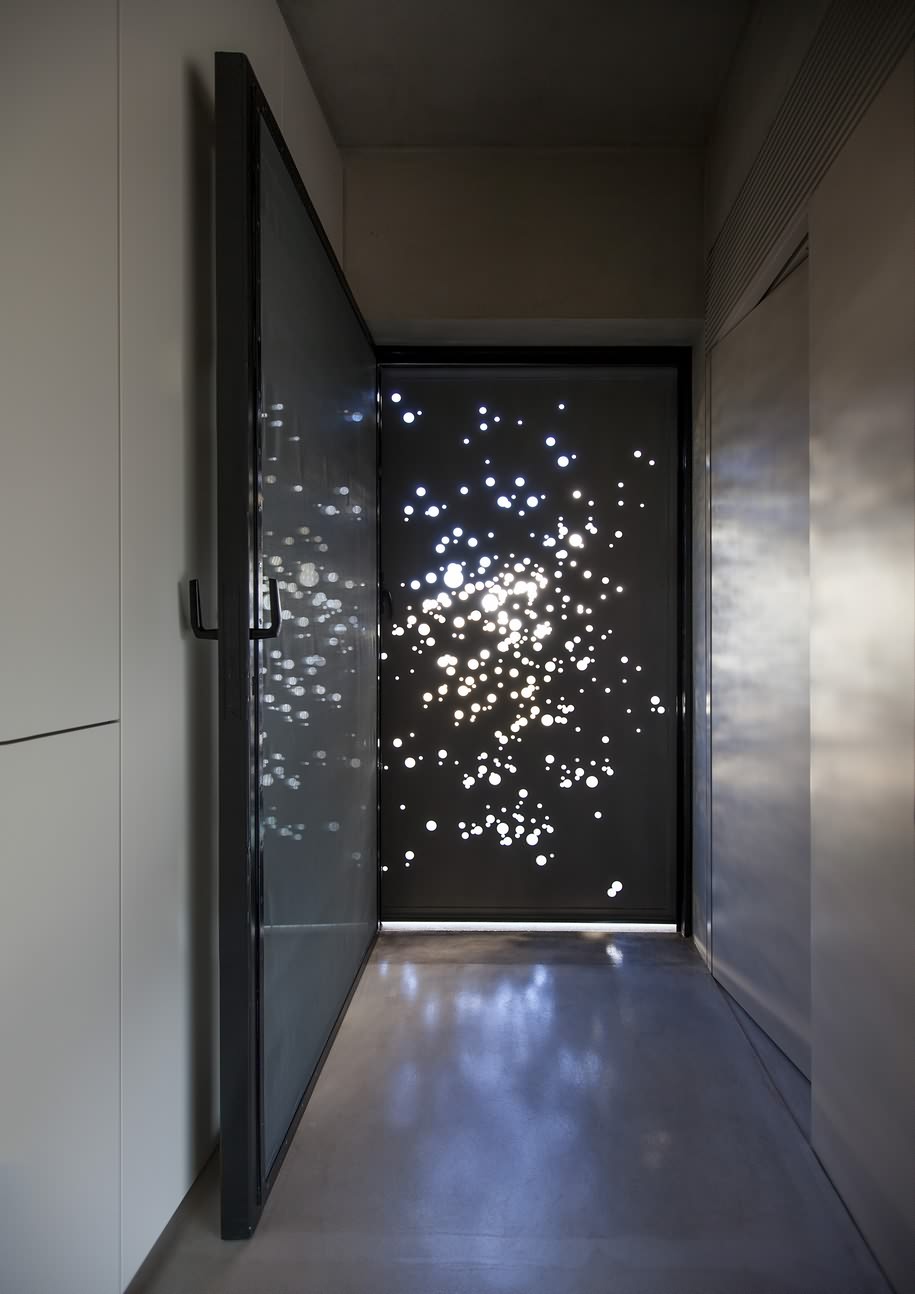 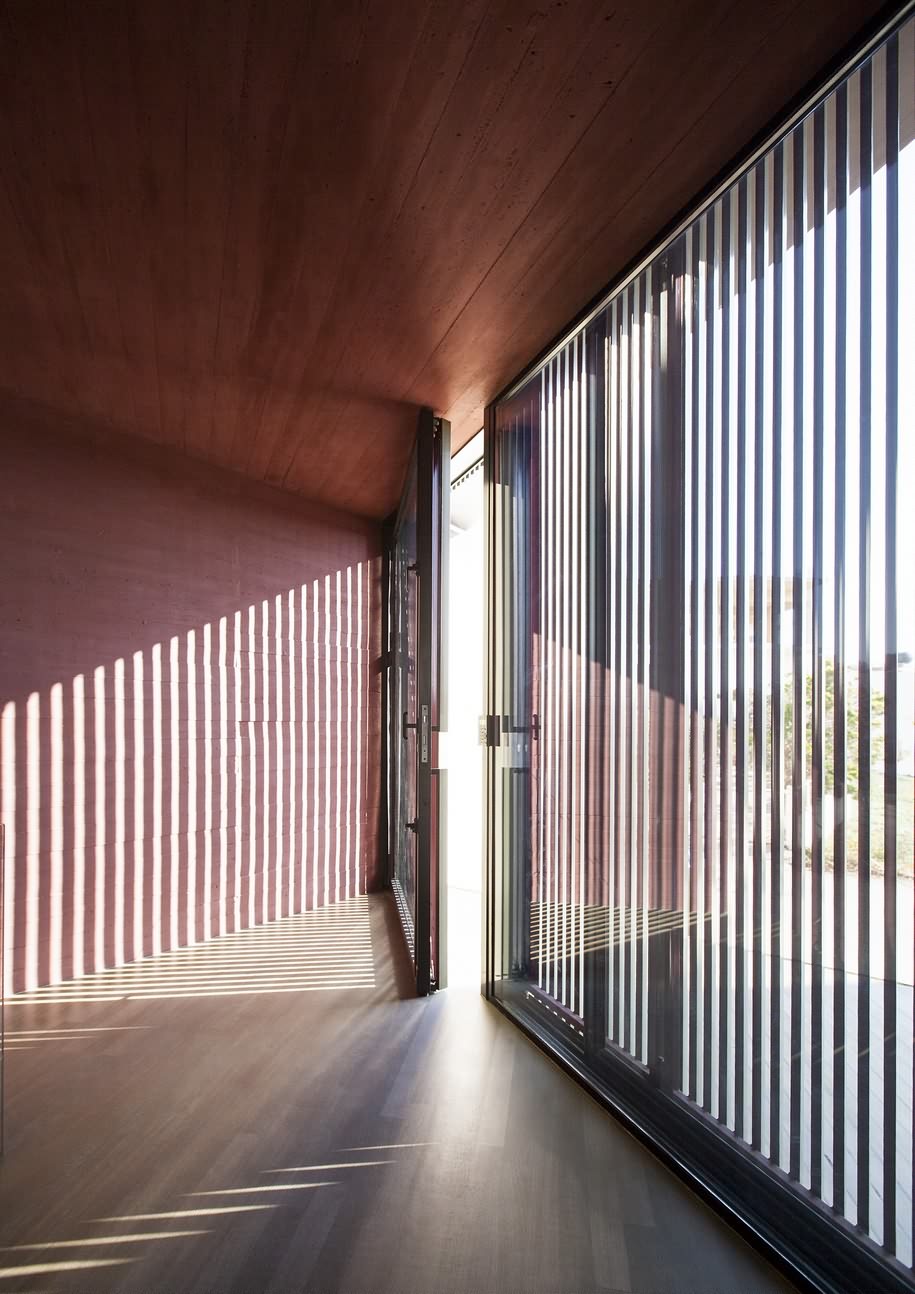 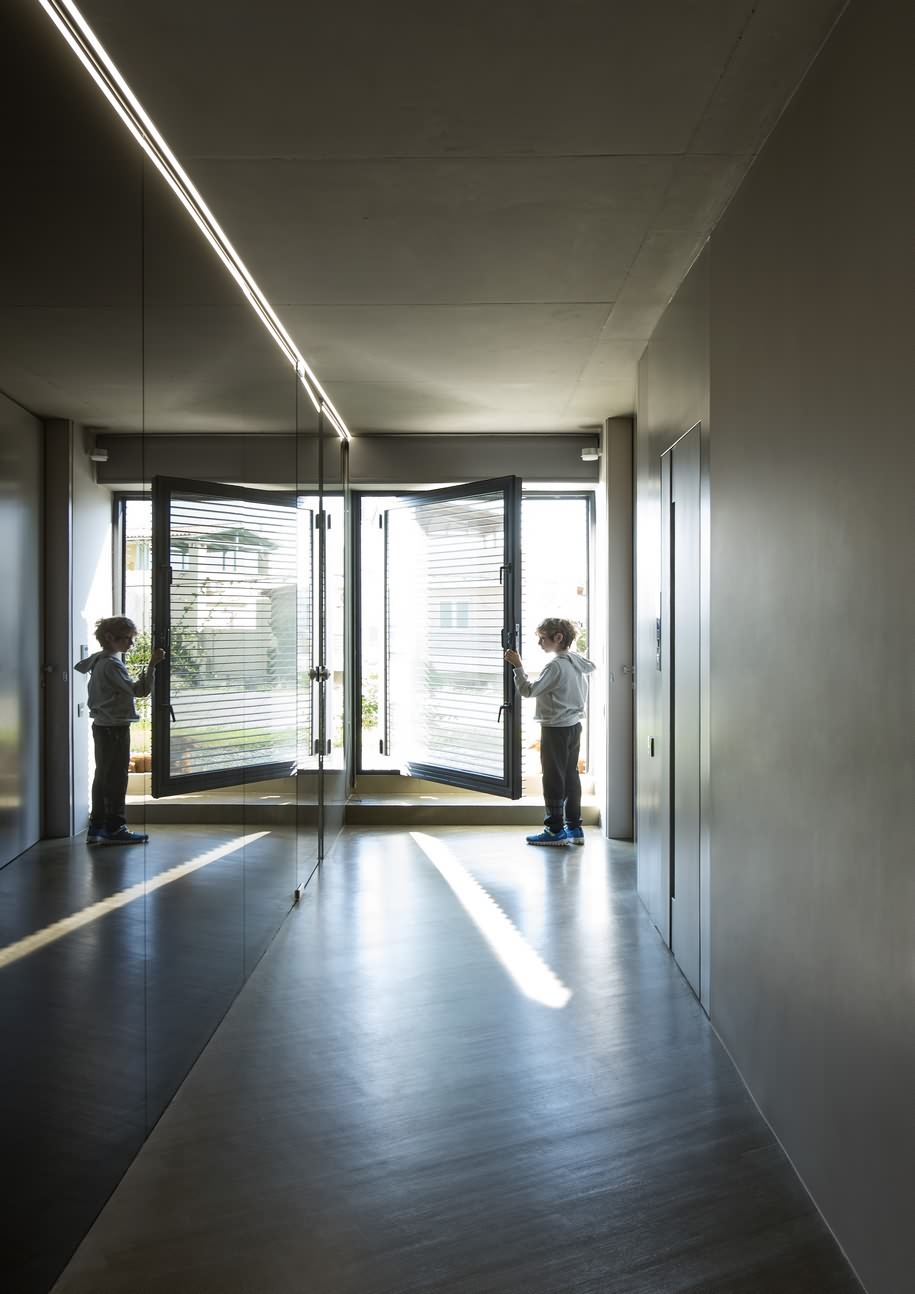 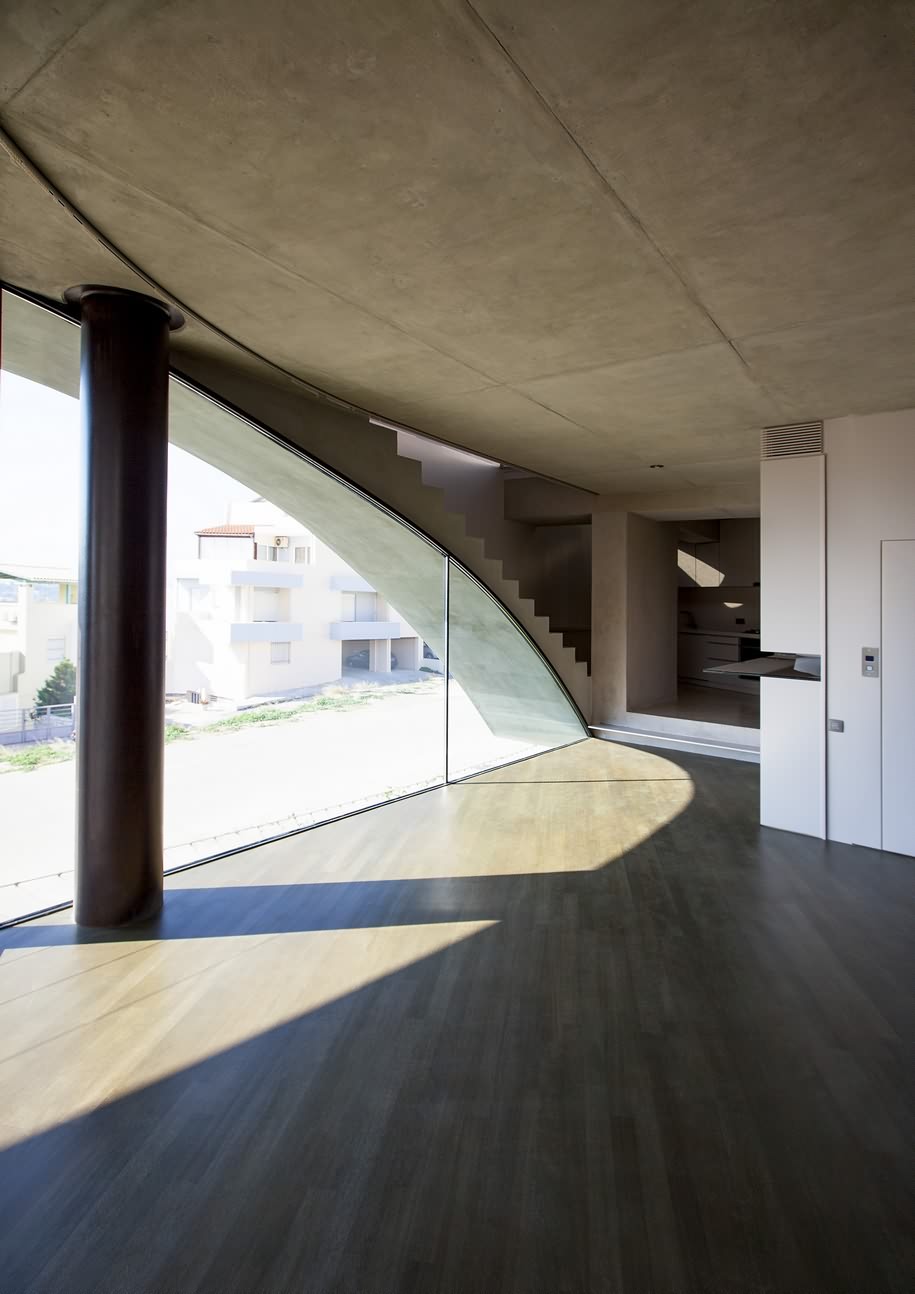 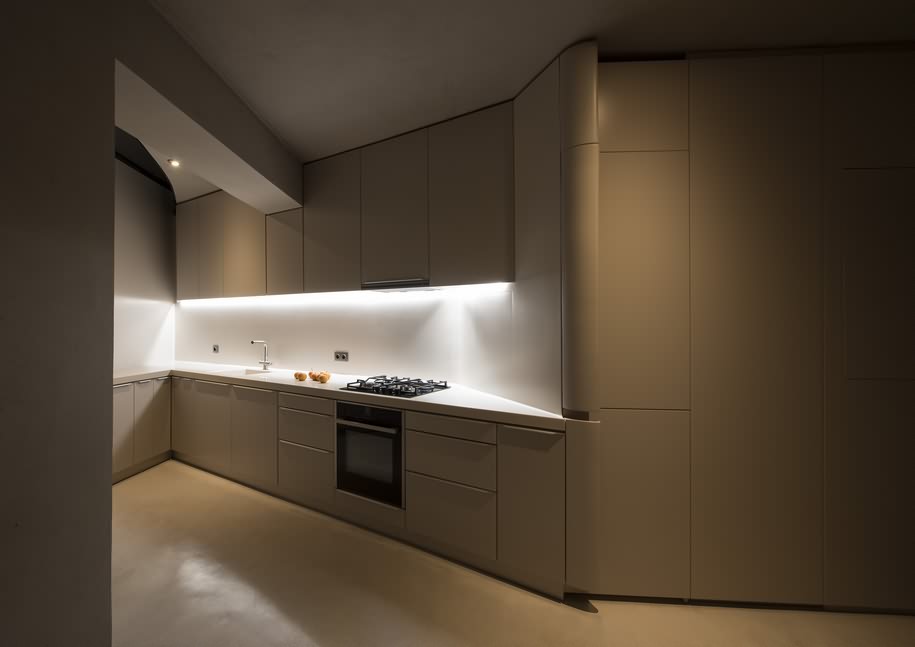 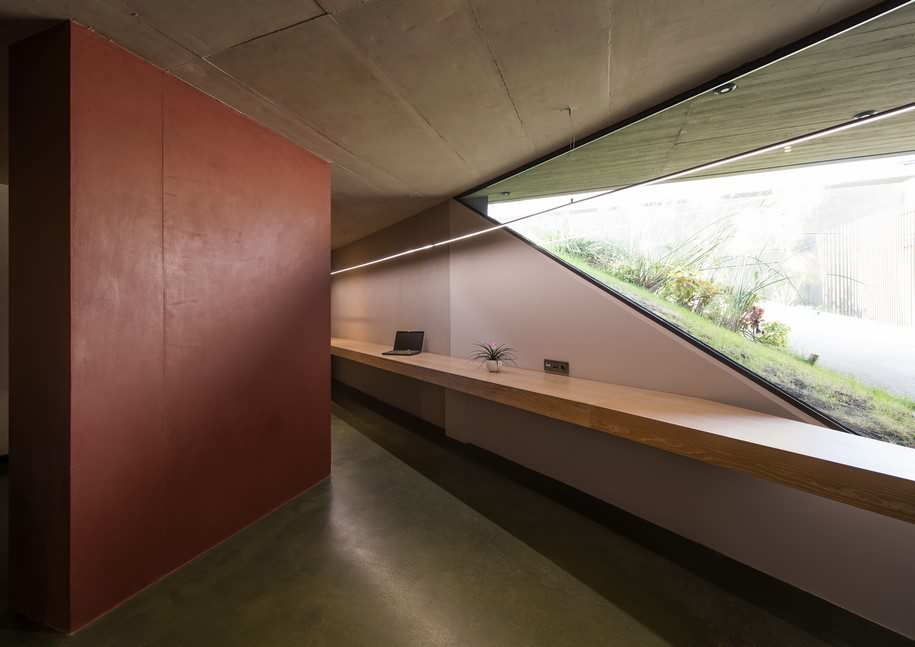 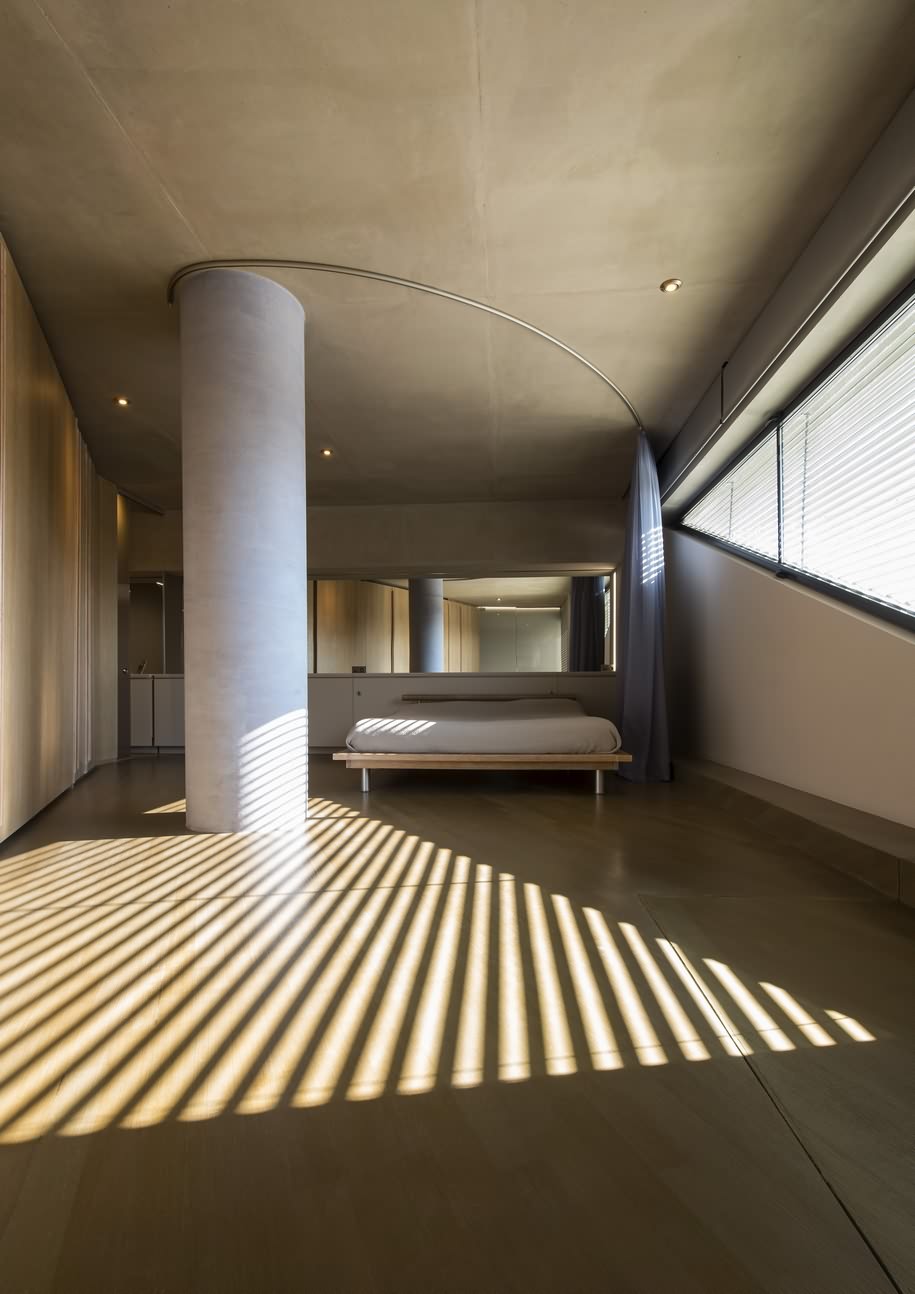 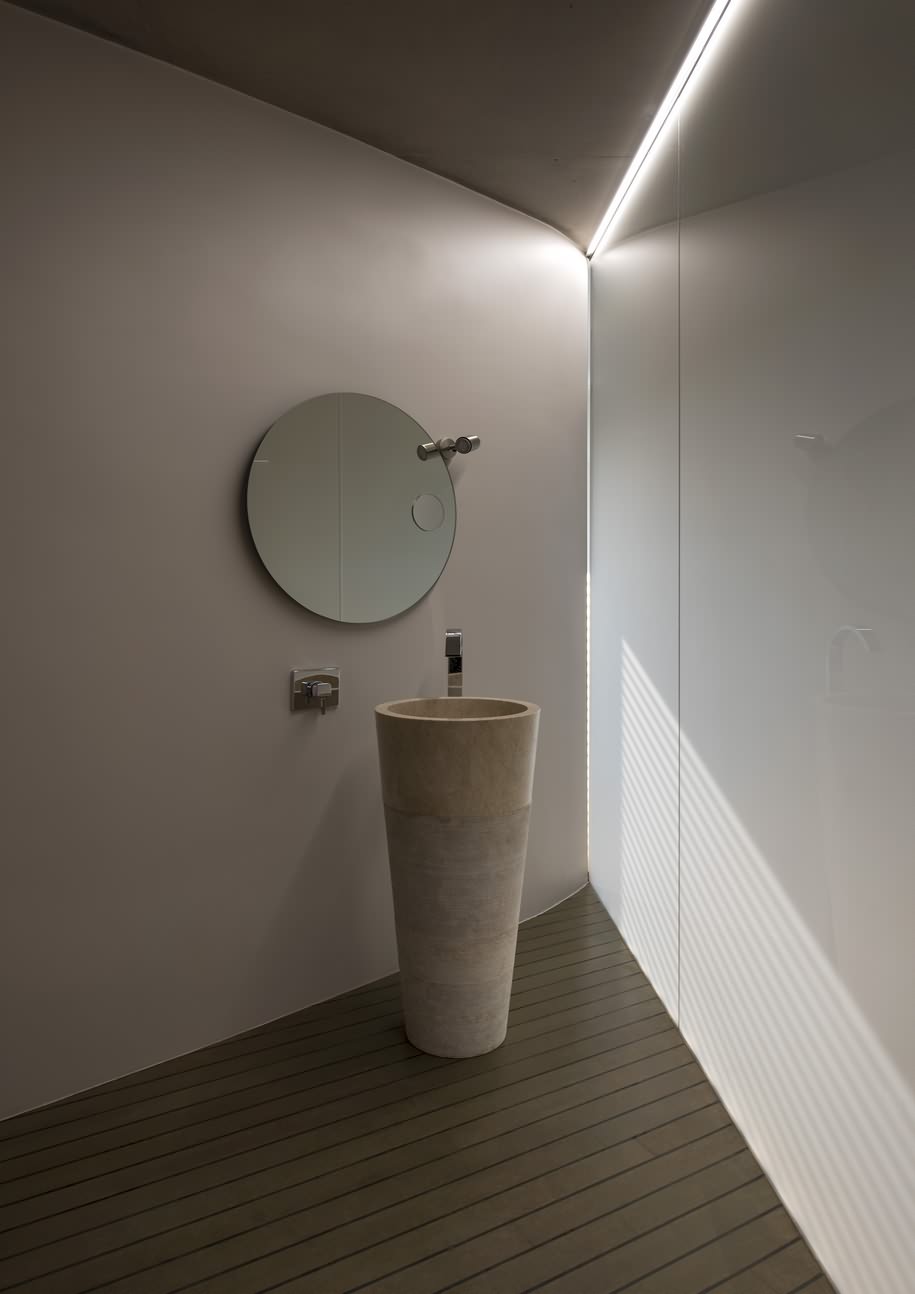 The structural design is inseparable from the form itself: the supporting at the garden’s level is progressively altering from a circular metallic column, to a square concrete one, in order to conclude to the corner monolithic wall upon which the façade rests freely. Its eastern vertical slot allows the thermal expansion and contraction.

In the interior, the vertical blinds offer privacy and protect from the eastern light, passing their deep red color to its innermost recess. The monochromatic kitchen recedes to the west, while its perforated metallic shutter acts as a magnet of light during both day and night. The underground study area, as well as the staircase leading to it, are of dark green colour -a natural continuation of the exterior garden. 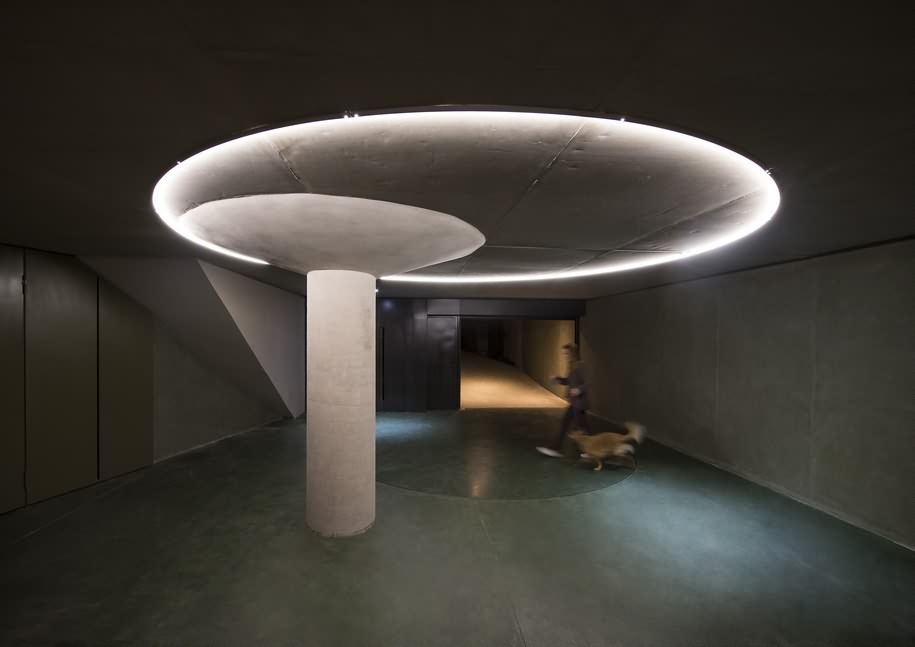 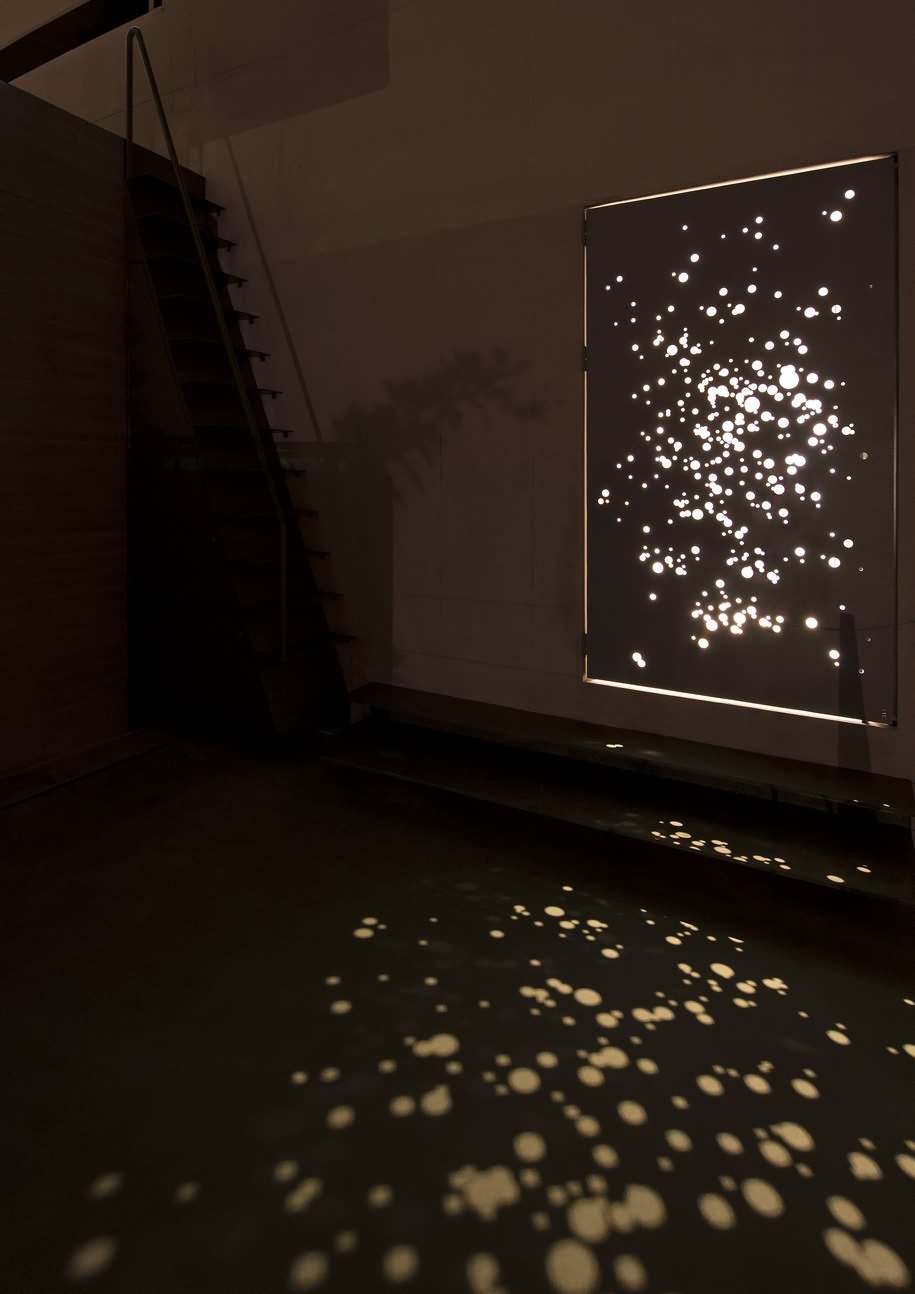 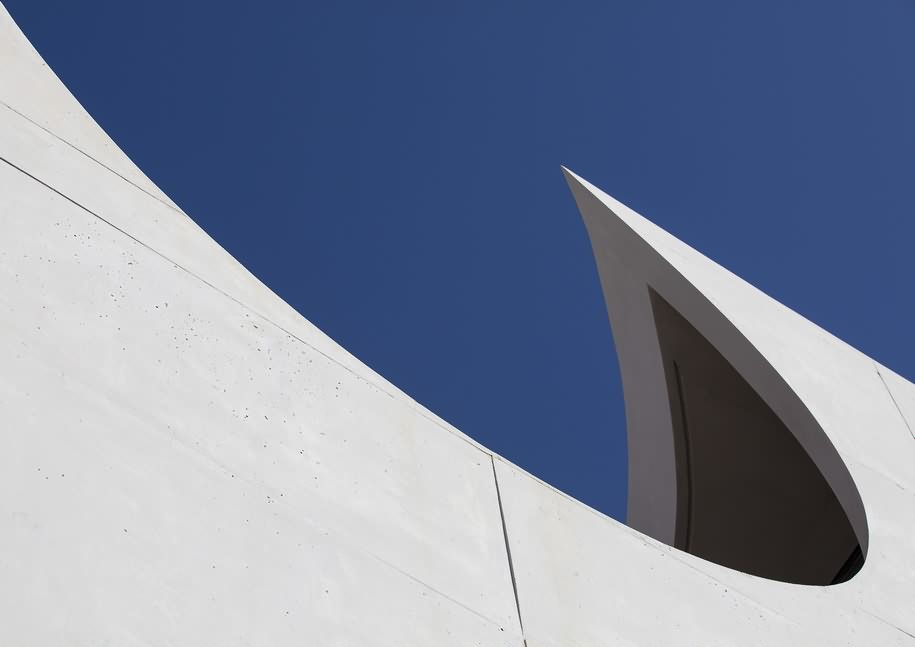 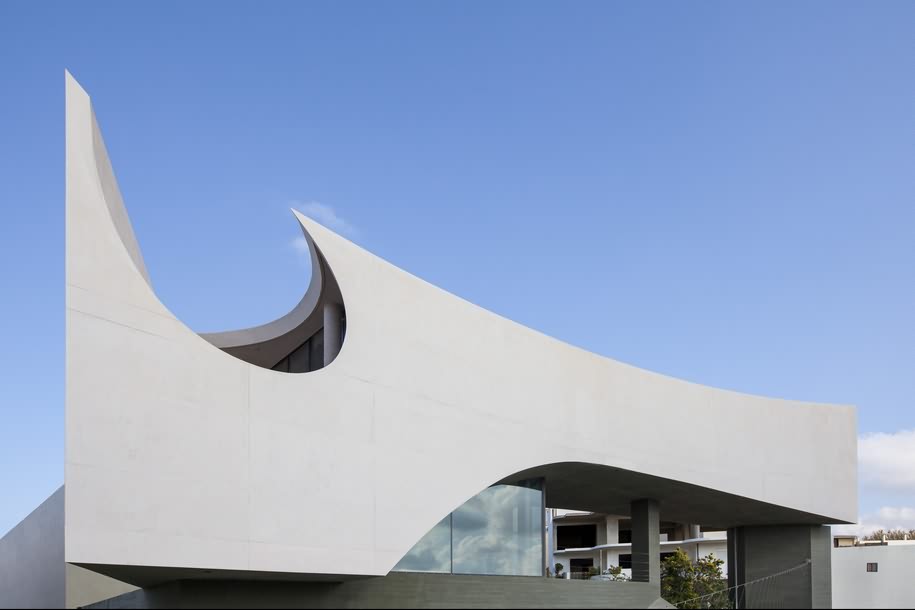 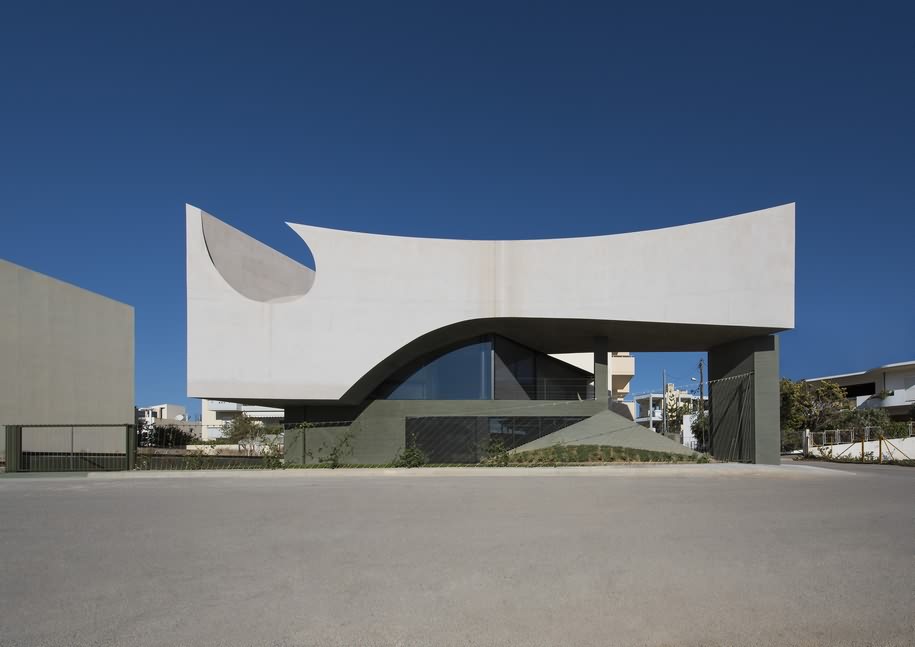 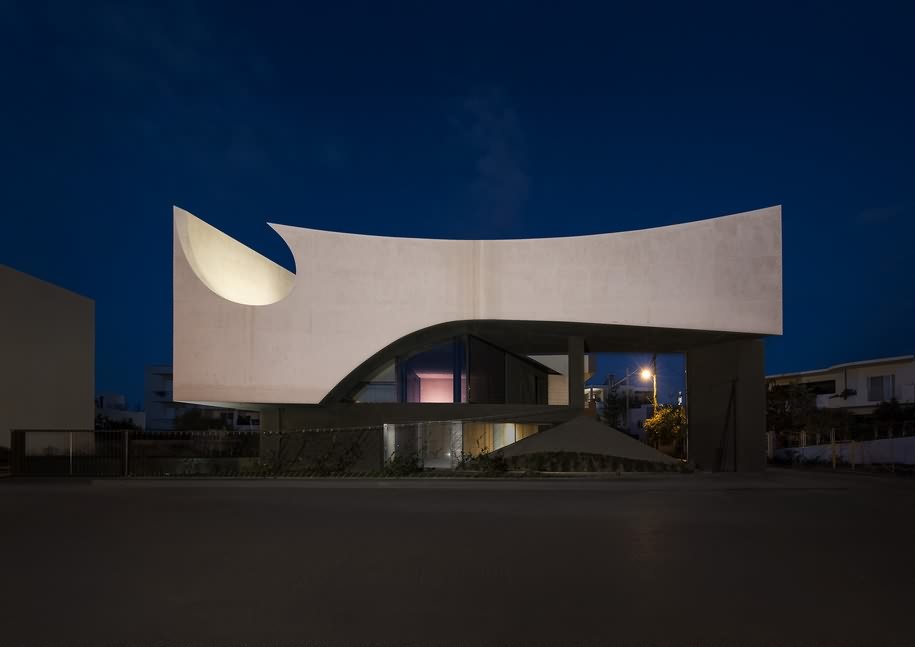 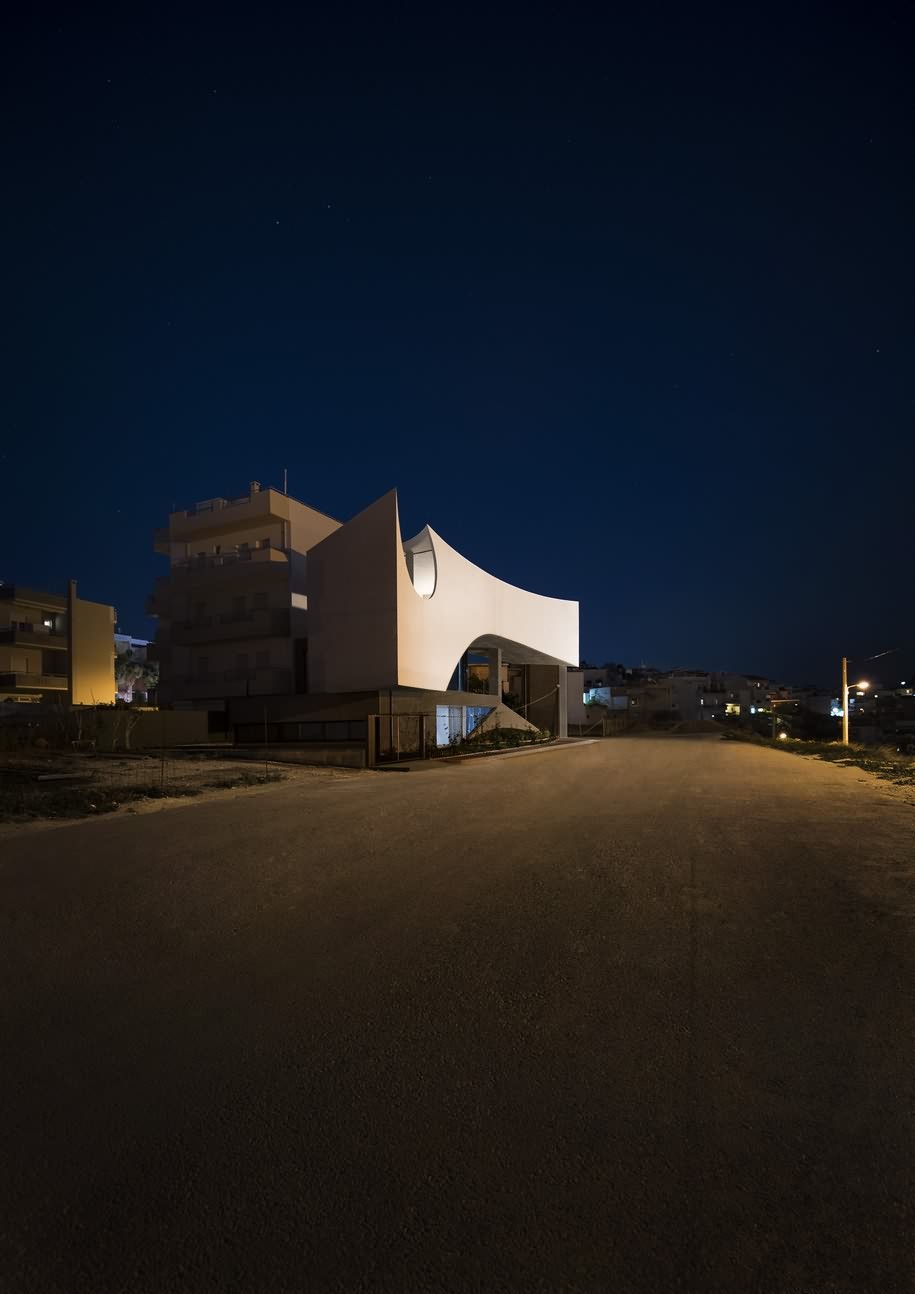 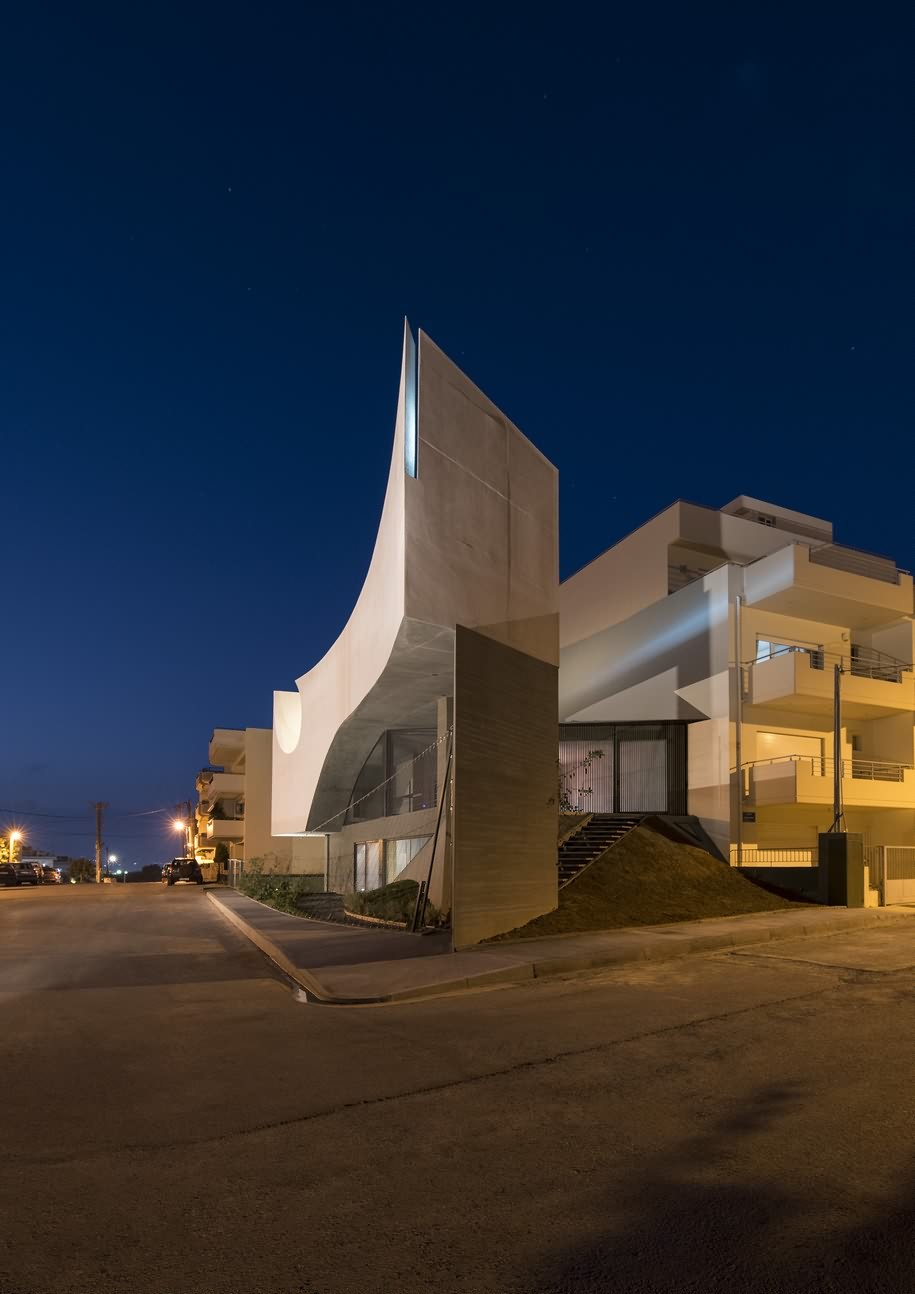 In the parking space, a circular neon wreath around the central column is complementary to the car’s manually rotating ring. In the lighter upper floor instead, it is the glass pane frames that are curved following the vaulted roof. The metal column remains oxidized and dark -while the lighting spots run along its axis. The west facade remains blind, as well as the eastern one -concealing a liquid, receptive interior.