Papalampropoulos Syriopoulou Architecture Bureau presents their proposal for the “New Complex for the School of Fine Arts in Florina” competition.

-text & images provided by the authors

CONCEPTUAL FRAMEWORK  |  ​The proposal approaches the design of the building complex of the New School of Fine arts in Florina by focusing on the context and content of this specific space of teaching and producing art. The investigation of the architectural type led to the devision of the term GENERIC SUBLIME as the conceptual axis of the design, thus defining the architectural scheme as a PROCESSION OF ROOMS.

SITE – CONTEXT  | The location of the site on the outskirts of the city of Florina, along the highway, renders the building “in exile”, in absolute isolation from its urban fabric. The proposal opposes the vague vastness of the context with an austere geometry and introvert quality by constructing interior micro-environments.

GENERIC SPACE  | The classification of the visual arts and their subdivision in categories (painting, sculpture etc) seems inadequate in the contemporary art context since the lines between genres are blurred, the different categories transcend one another, new agents form new categories which in turn transform or self-negate, thus creating an ever changing landscape of mutations.

The body of the arts emerges as a network of infinite possibilities, a “body without organs”, which pulsates with a myriad of triggers.

The architectural layout should construct a spatial infrastructure that can accommodate that which does not yet exist and will come into being. The Generic Space, the space without memory and identity, the space which bears the same features with the spaces adjacent to it, appears to be the answer to the design problem. It can be divided into smaller parts, it can be cut and pasted to any point, in any way, always preserving its properties intact.

SEQUENCE OF ROOMS  | ​The proposal refers to the archetype of the ROOM, as contested in its primal form, an enclosure between four walls, which consists of the minimum module of production of the generic space. The subdivision and multiplication of the type produces a sequence of identical spaces thus forming an architectural typology of unconstrained flexibility.

GENERIC SUBLIME  | If the notion of the Sublime constitutes of its non-defined form and its infinite nature (Kant, “Critique of Pure Reason”) or is conceived as the embodiment of the infinite within the finite (Schelling), then we can trace a possible connection with the Generic. In examples of architectural utopias (Ville Radieuse, Non-Stop City, Continuous Monument) the obsessive repetition of the type indicates a conceptual affinity between the Generic and the Sublime.

The Sequence of Rooms attempts to stimulate the transcendent quality of the Sublime through the repetition of the archetypical room of four walls with the manipulation of light and scale. The roof through its beam structure seems “partially absent”, referring to countryside structures. In the case of the School of Fine Arts the rooms lack the archetypical identification of interior-exterior space since they consist of intermediate inexplicit versions of the prototype. The connections between the different spaces appear loose as someone can wander as a flaneur inside the “labyrinth” of different sections by moving from one room to the other.

MATERIALITY  |  The common low-cost (in the greek context) structural system of concrete beam upon column and its filling with unplastered brickwork references the informal and unfinished non-architecture of the greek countryside. This is further accentuated by the visible concrete beam roof with translucent light diffusers that floods the interiors with natural light throughout the day, especially in the often gloomy cold climate of Florina.

SUSTAINABILITY  | The proposal adopts a multi-facetted sustainability strategy which targets the optimization of the interior thermal comfort, the minimization of the air-conditioning cost, the energy recycling and the rainwater management.

The design applies a hybrid, sensor regulated, ventilation system which allows for an automated combination of natural and mechanical ventilation together with heat recovery and recycling methods with differentiated seasonal function. 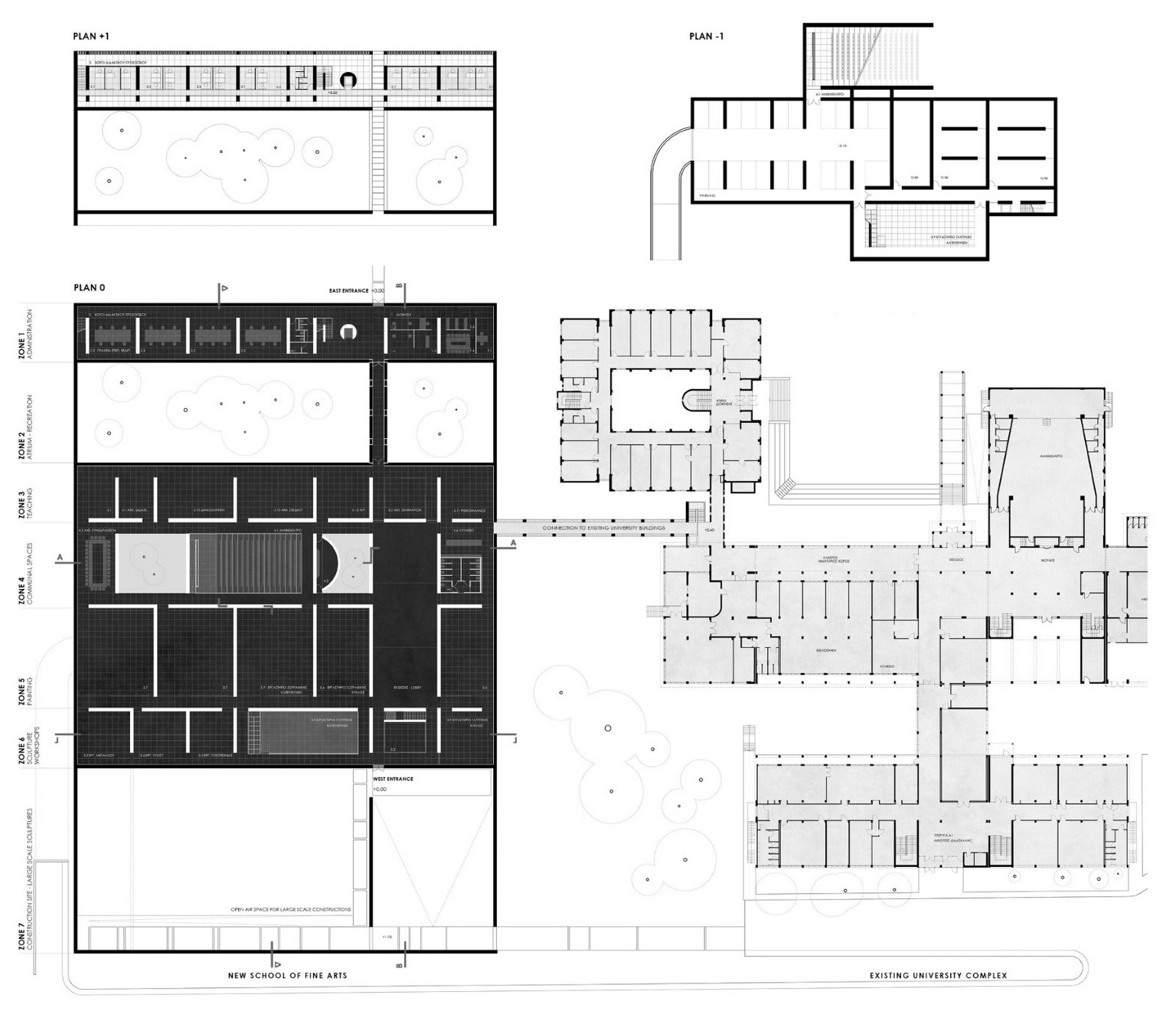 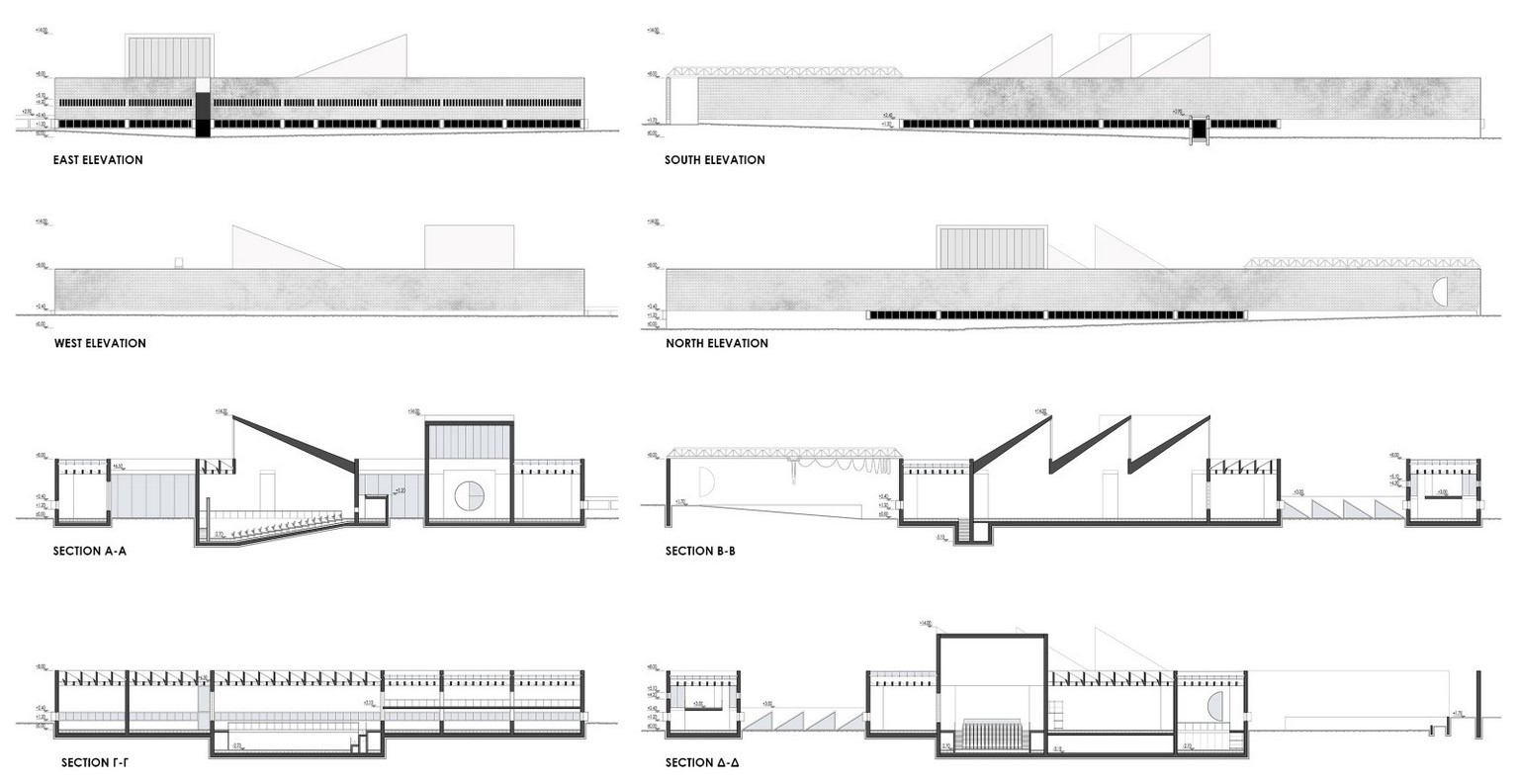 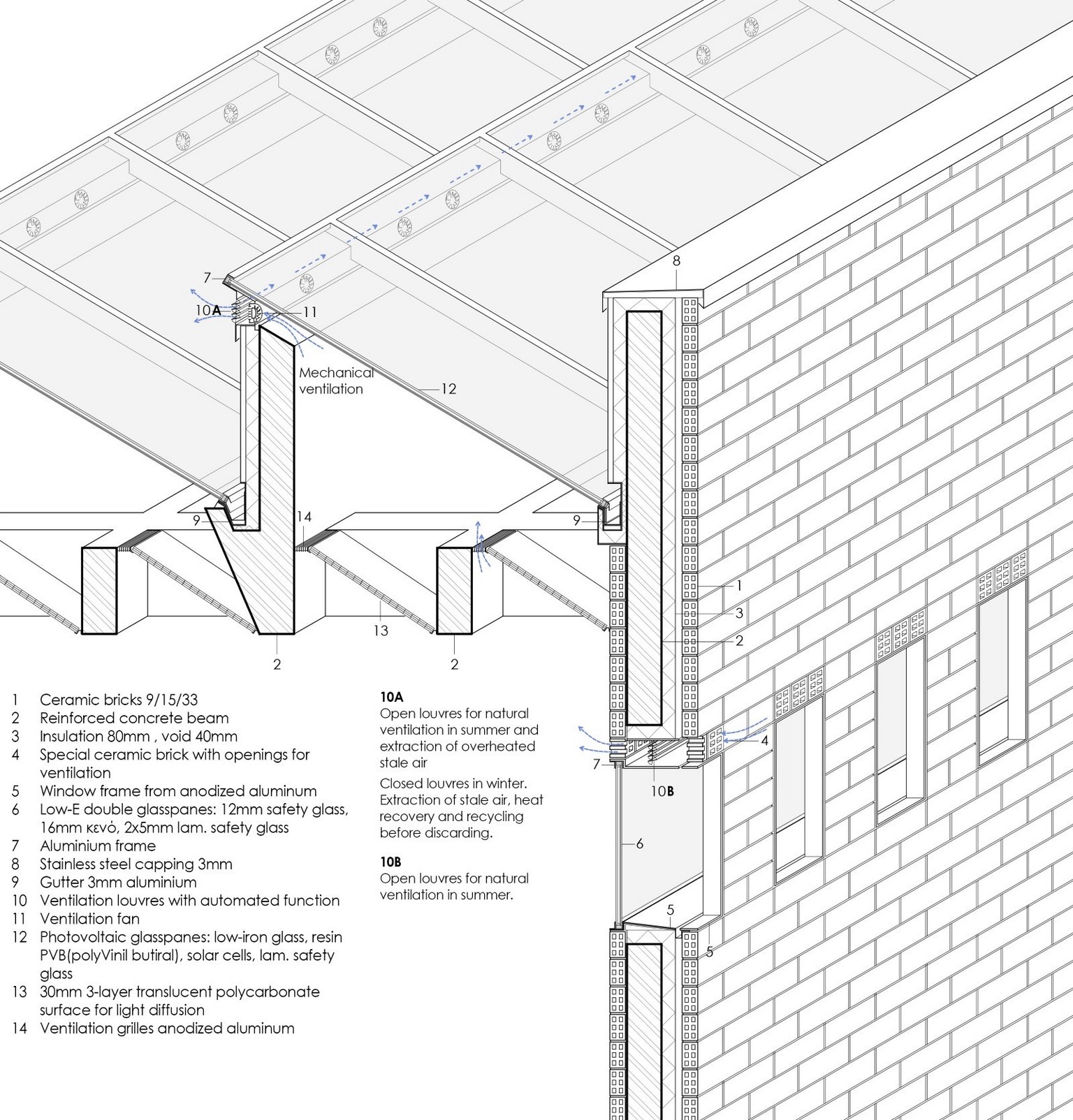