gjG Private single-family house.
gjG House is one of the experimental houses BLAF architects is known for in Flanders and beyond. It is part of their research called ‘Brick Wall City’, that addresses the precise relationship between material, construction and the appearance of brick architecture. 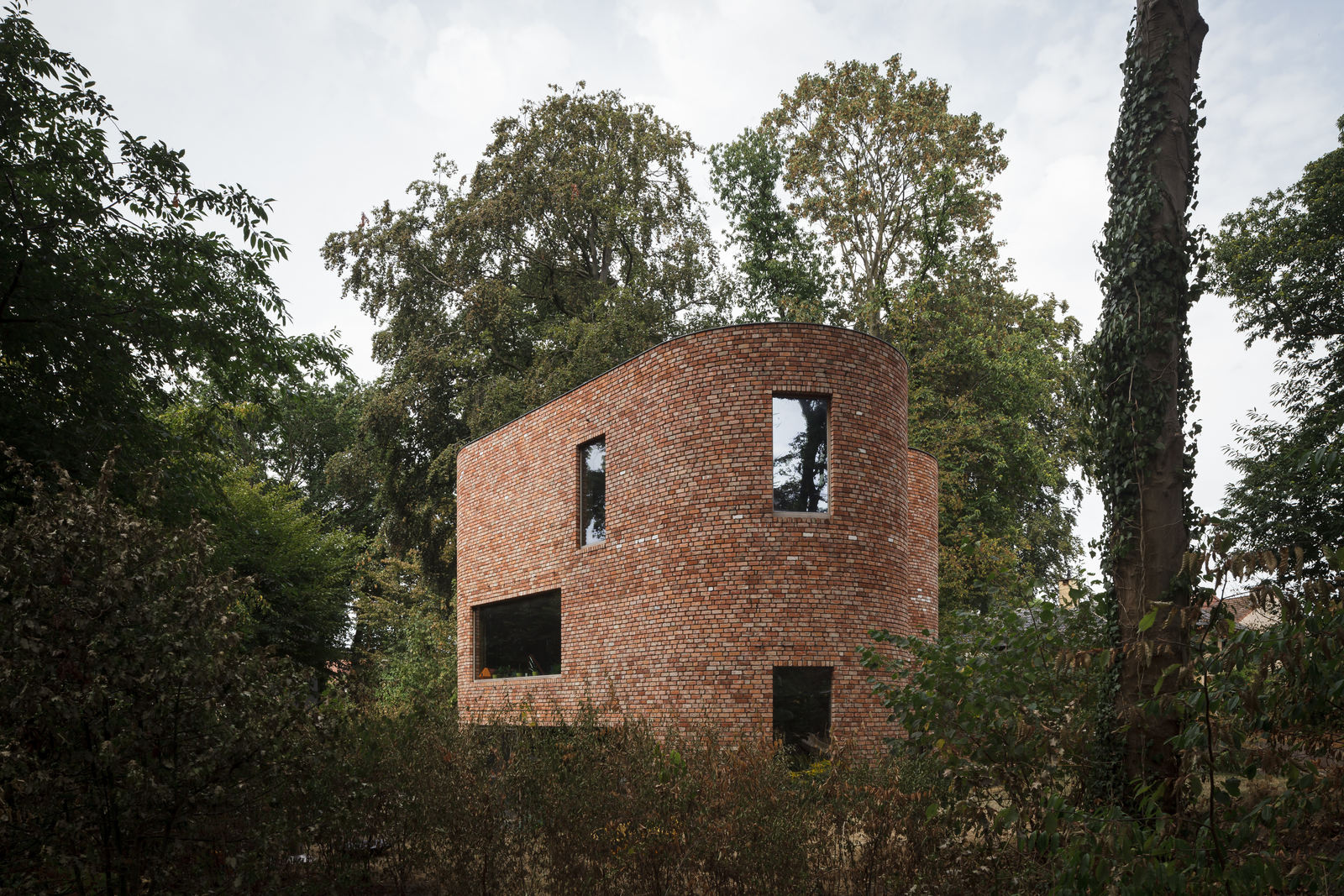 Since the introduction of energy performance standards ‘EPB’ in 2006, thermal insulation in building skins gradually got thicker, causing a shift towards light and low cost facade cladding materials such as putz, scales, tiles, textiles etc. As for brick buildings, this meant an evolution towards brick tiles glued onto buildings as ‘exterior wallpaper’. 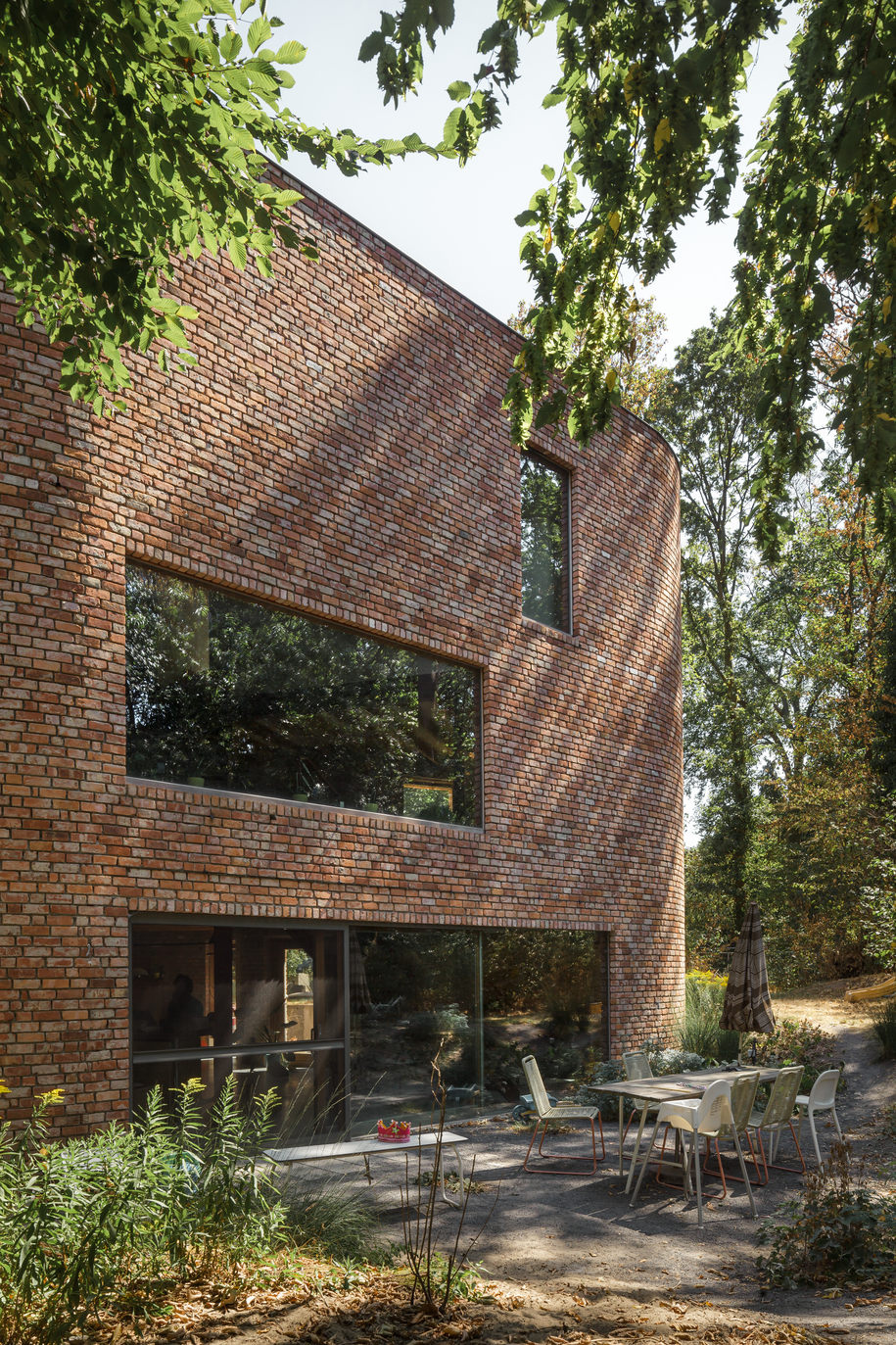 BLAF noticed in an early stage that a construction method with layers glued onto each other would lead to the impossibility to separate the materials at the end of the building’s life cycle, resulting in huge amounts of non-re-usable waste. 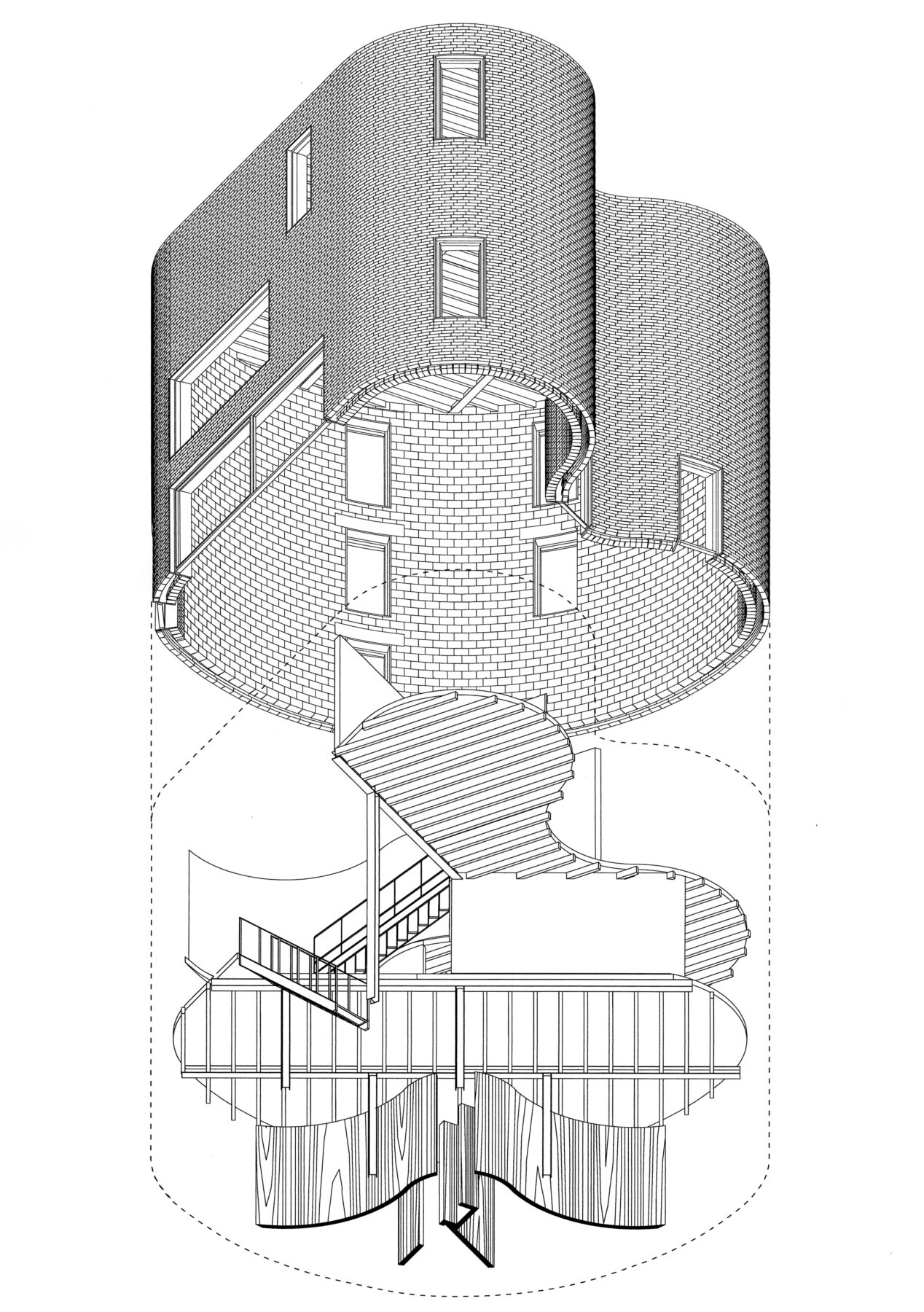 Also, in terms of the design, this evolution leads to new aesthetics, with tectonic expressions no longer to be considered as the result of stacking bricks, as well as a recalibrated position of the architect towards the design of the building elevation. 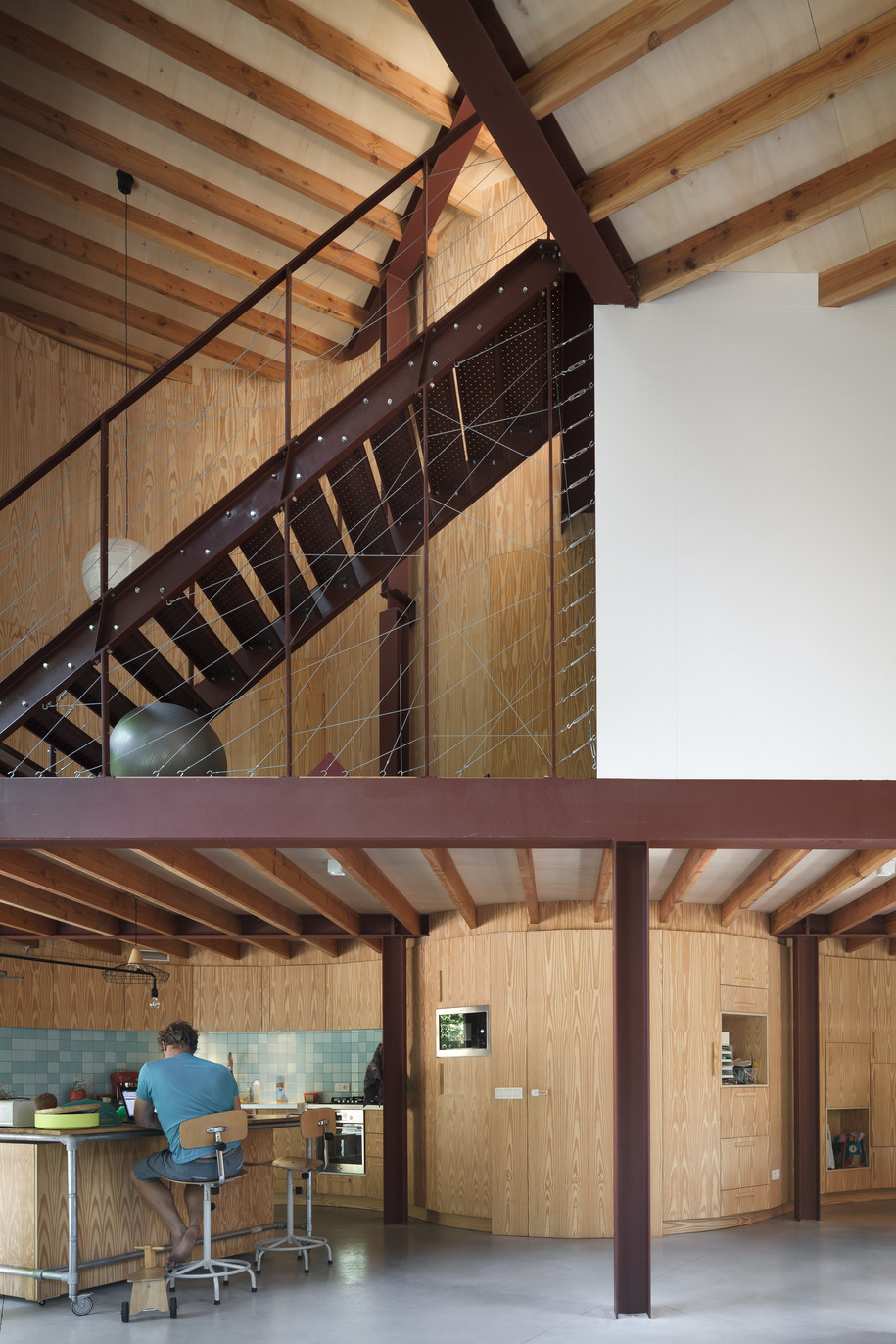 BLAF’s considerations on brick design and construction have led to a series of brick houses, exploring hybrid construction and the development of the new ‘Big Brick’.

The gjG house is one of the early houses in that series, in which the architects explore the re-use of bricks and the shape of the shell in function of its autonomy. 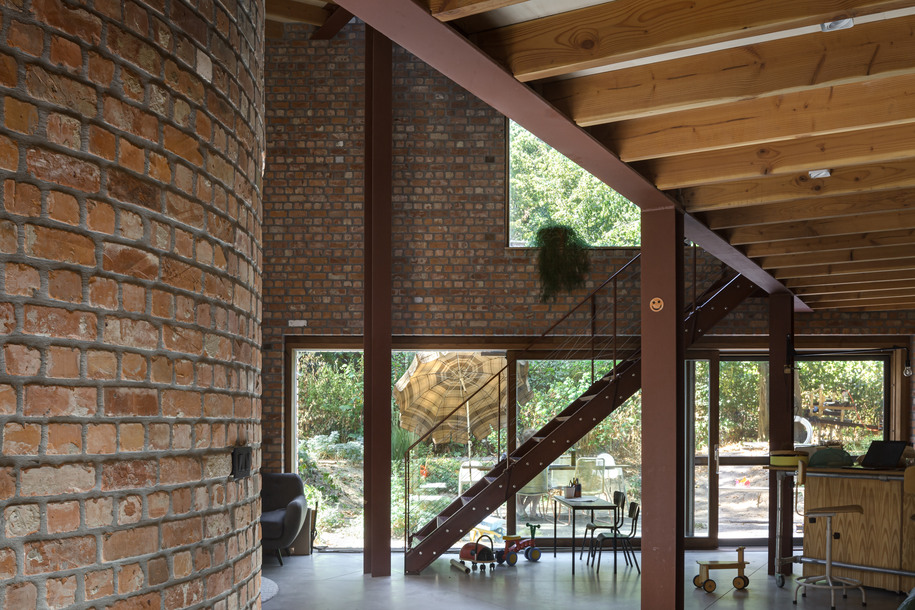 The gjG house seems to be set in a forest-like residential environment, while actually it sits right next to the E17-highway in Ghent, on a plot that used to be part of the garden of a late 19th century mansion. 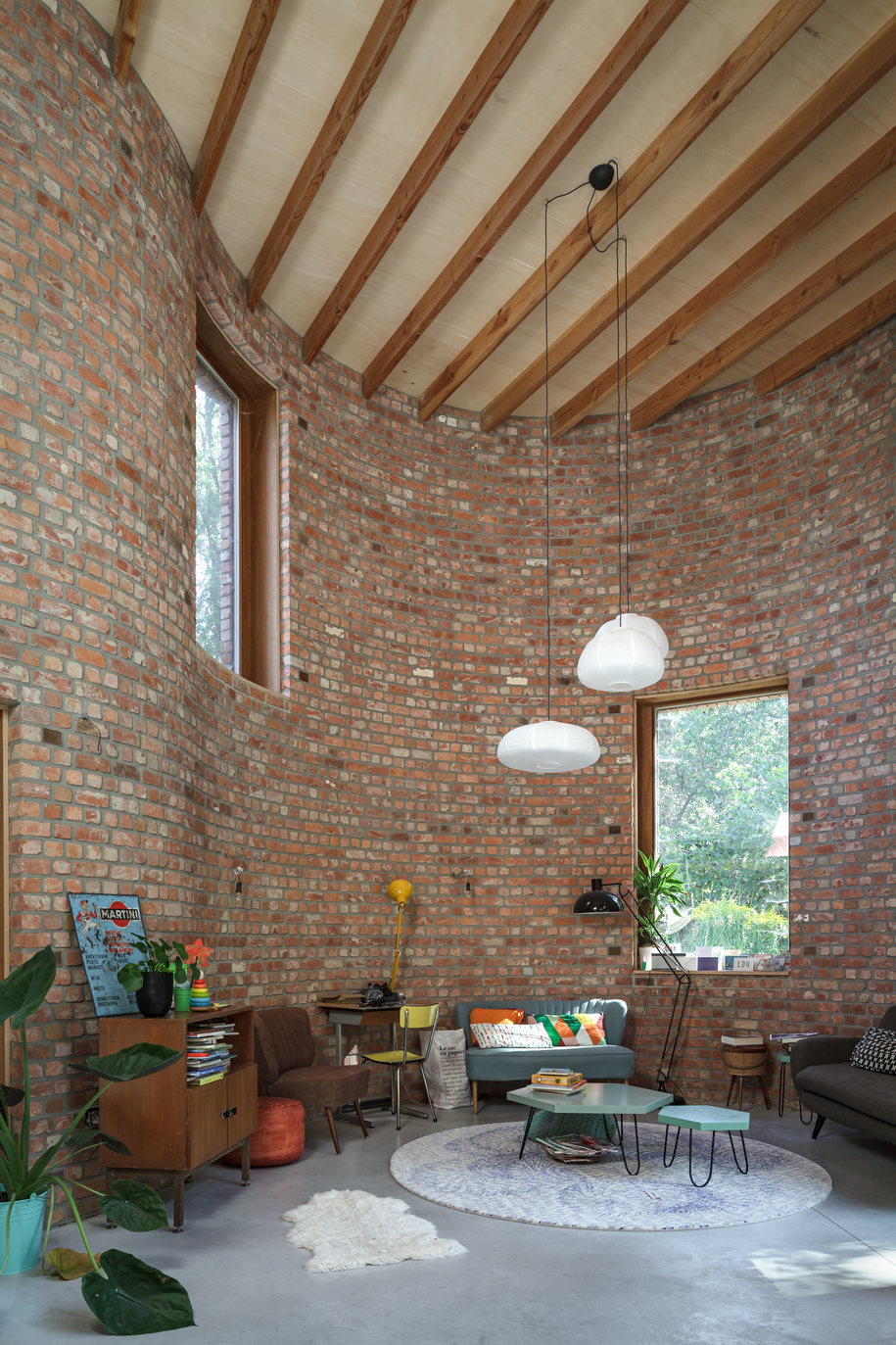 The curved brick shell of the gjG house has multiple motives. First of all the house was to be built on a plot with trees. Instead of cutting the trees, the house was shaped to fit in between them. 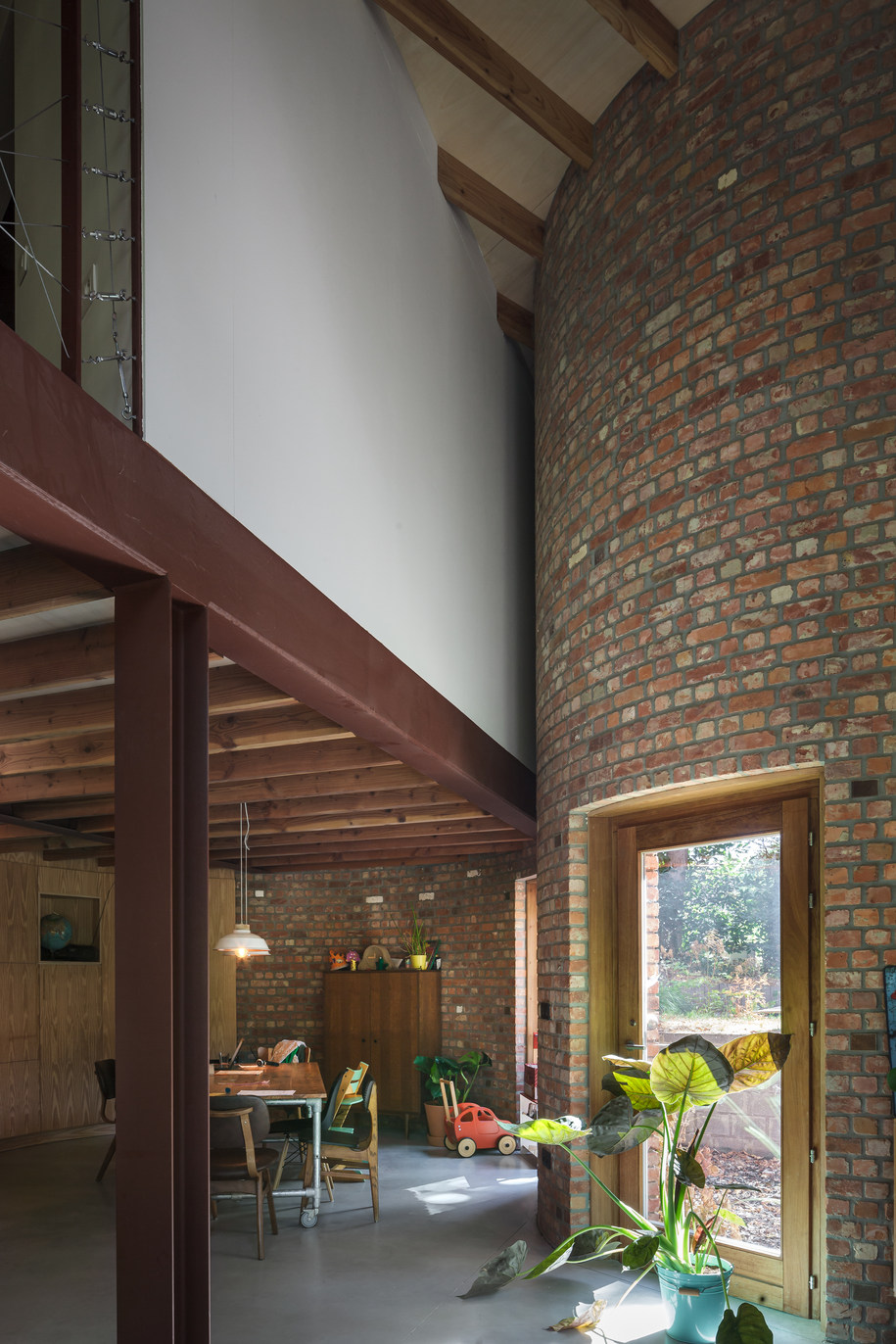 Secondly the shape of the shell allows it to be structurally autonomous.

The stability of the outer brick wall is not depending on cross walls, columns or beams, but merely on its form and the brick bonding.

Thirdly, the massive shell of the house contributes to the acoustic comfort on the inside. 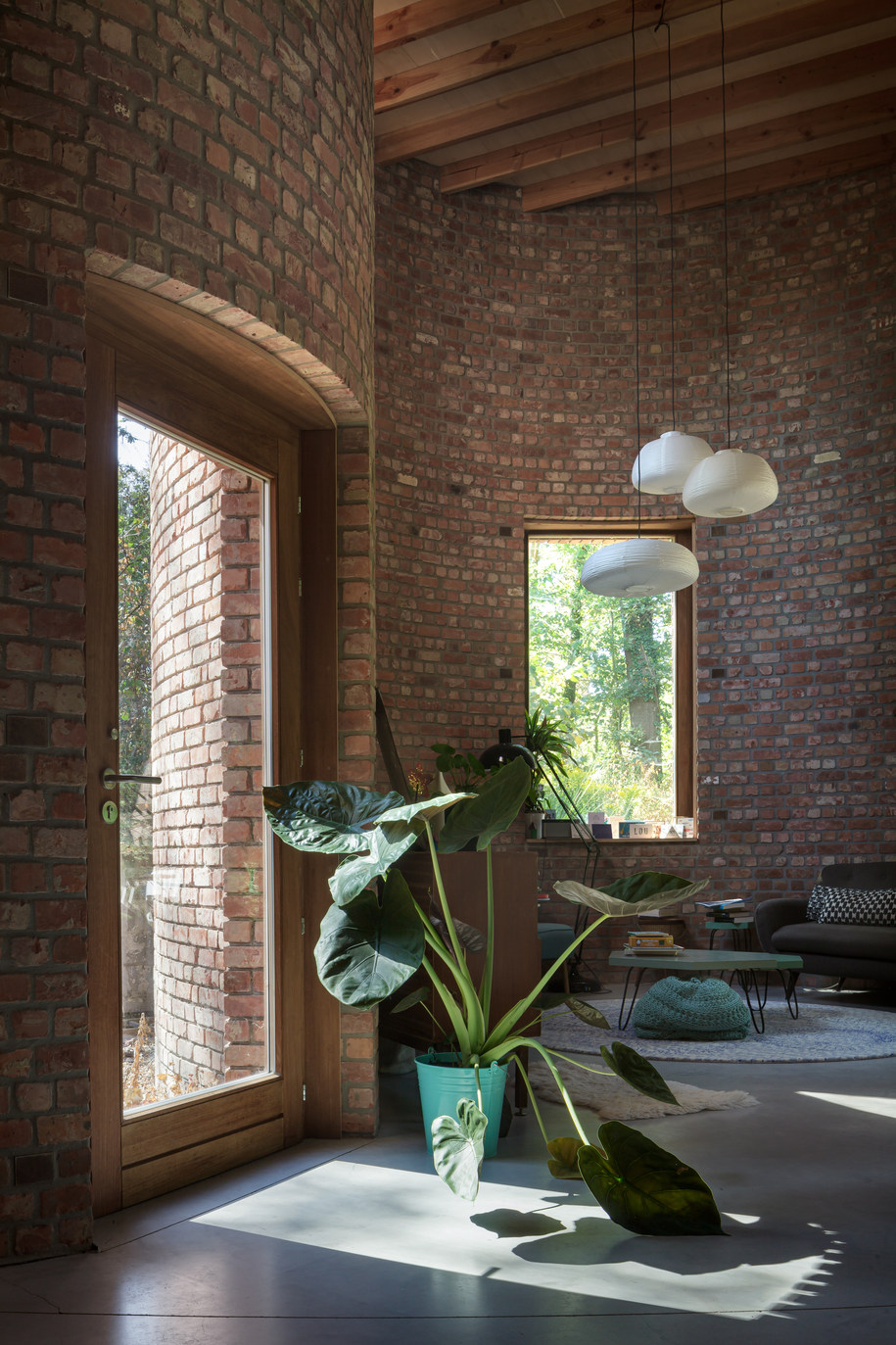 The shell is made out of re-used bricks, creating a generic and timeless aesthetic. The shell supports the roof, together they form a ‘bell’, with a receptible interior space. 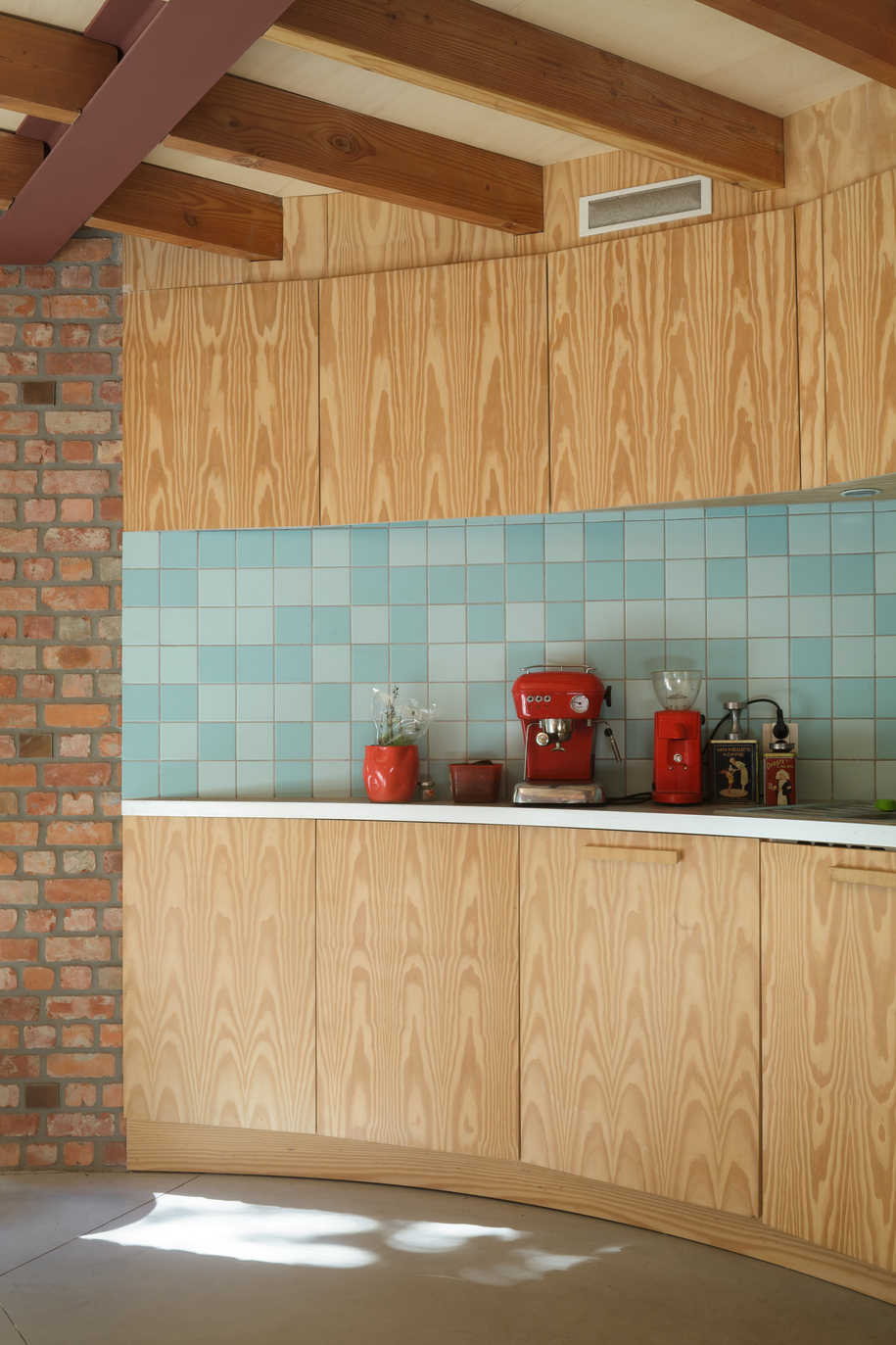 The infill of the bell is the house, made with steel and timber frame constructions, making three stories in one area and one open space in another area. 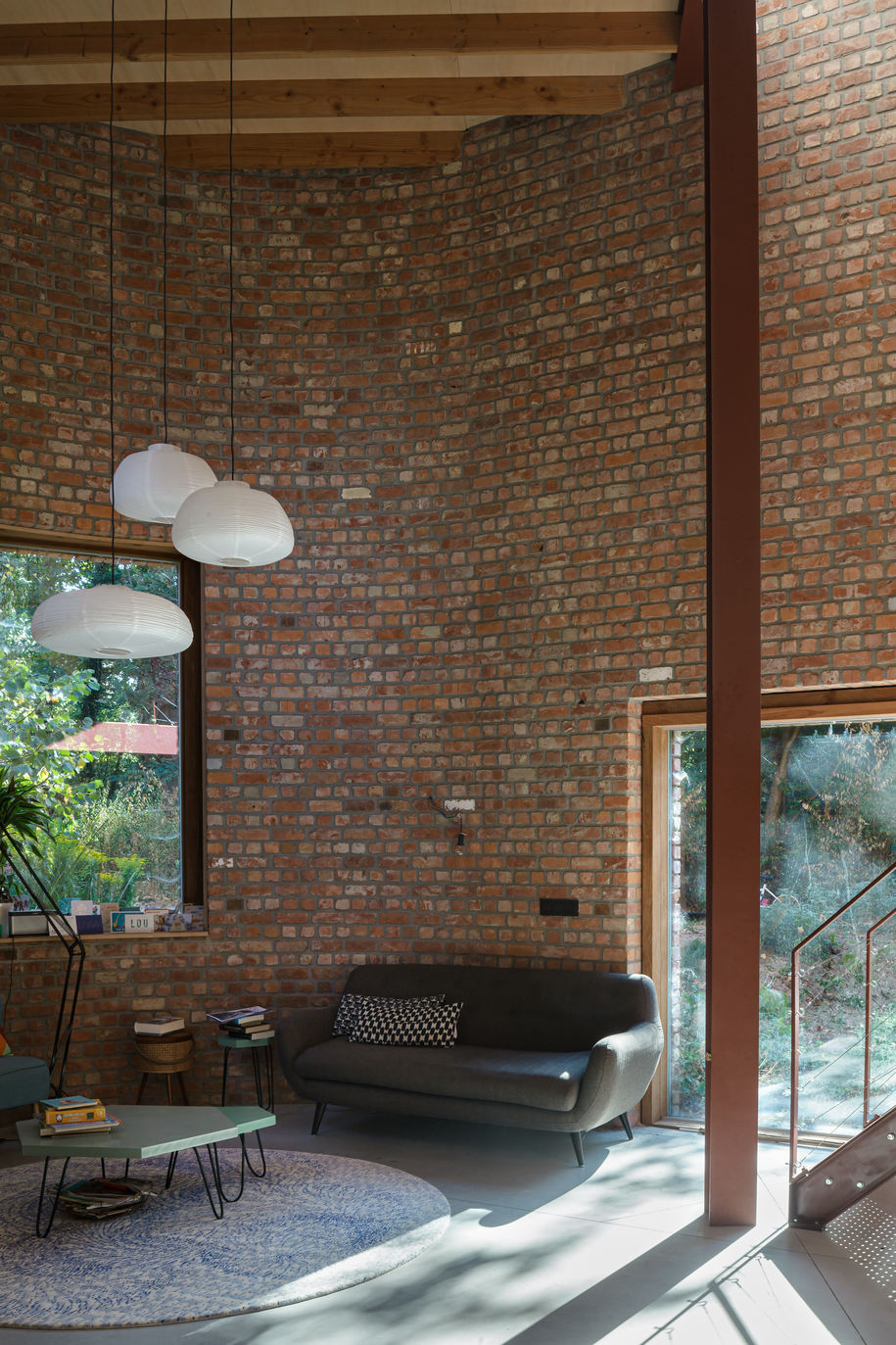 The inside of the shell is finished with the same re-used bricks, creating the idea of an exterior space between the trees. 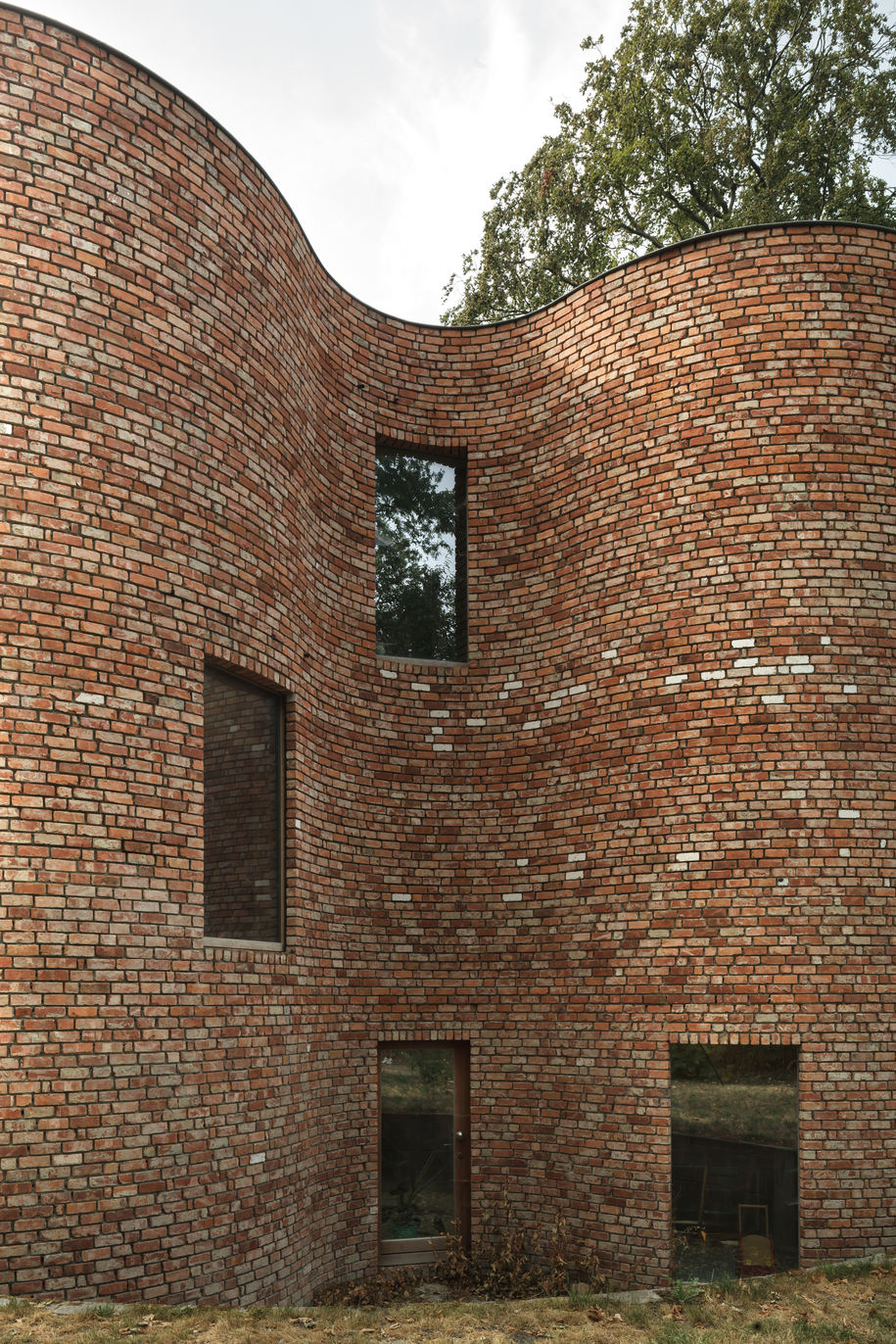