Sitting atop the Avalon Beach Cliffs overlooking one of Sydney’s famous surf breaks Little Avalon. Avalon Residence is one of only a handful of house sites along this coastline that faces north, which allows for an east west orientation, with large windows capturing both the stunning views and northern sun. 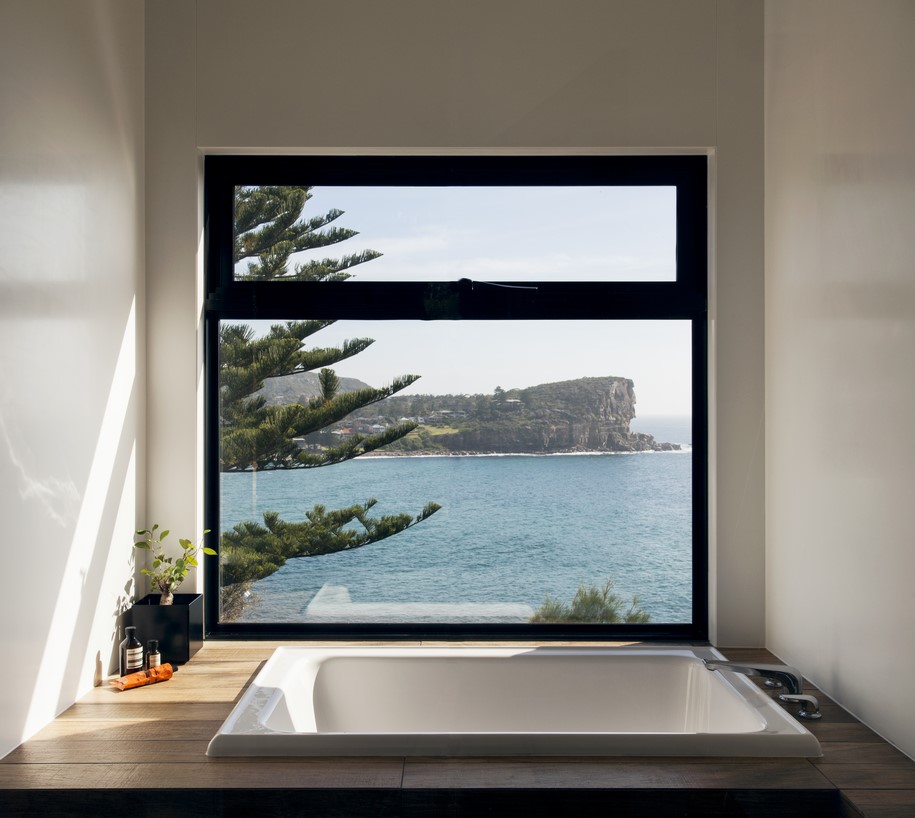 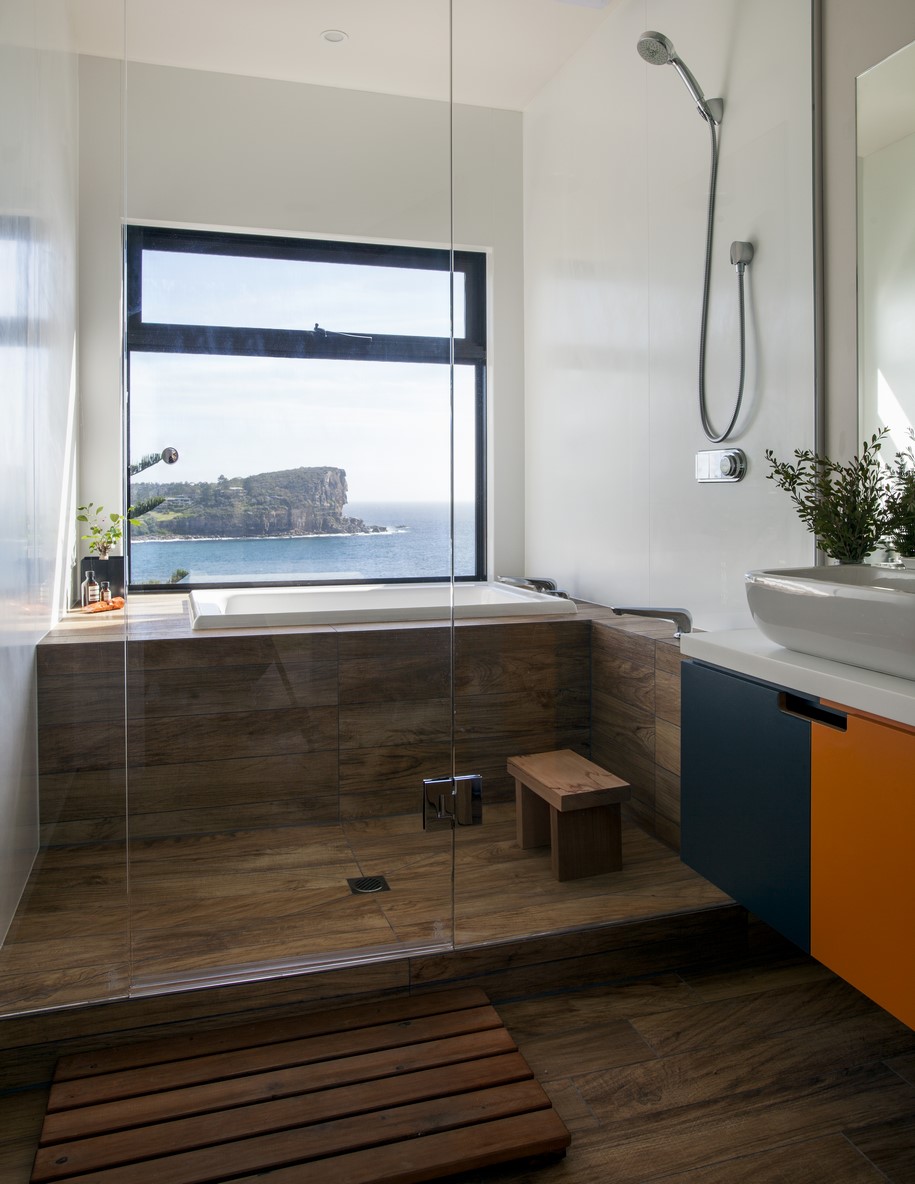 Situated on a sloping site, the small footprint home touches the earth lightly and is elevated off the ground on structural posts. With a size of 106 m2 the residence is minimal in size but grand in design intent. A garden roof crowns the house and allows it to merge back into the coastline. The interior is composed with 2 bedrooms, 1 bathroom, open plan kitchen, dining and living and storeroom. 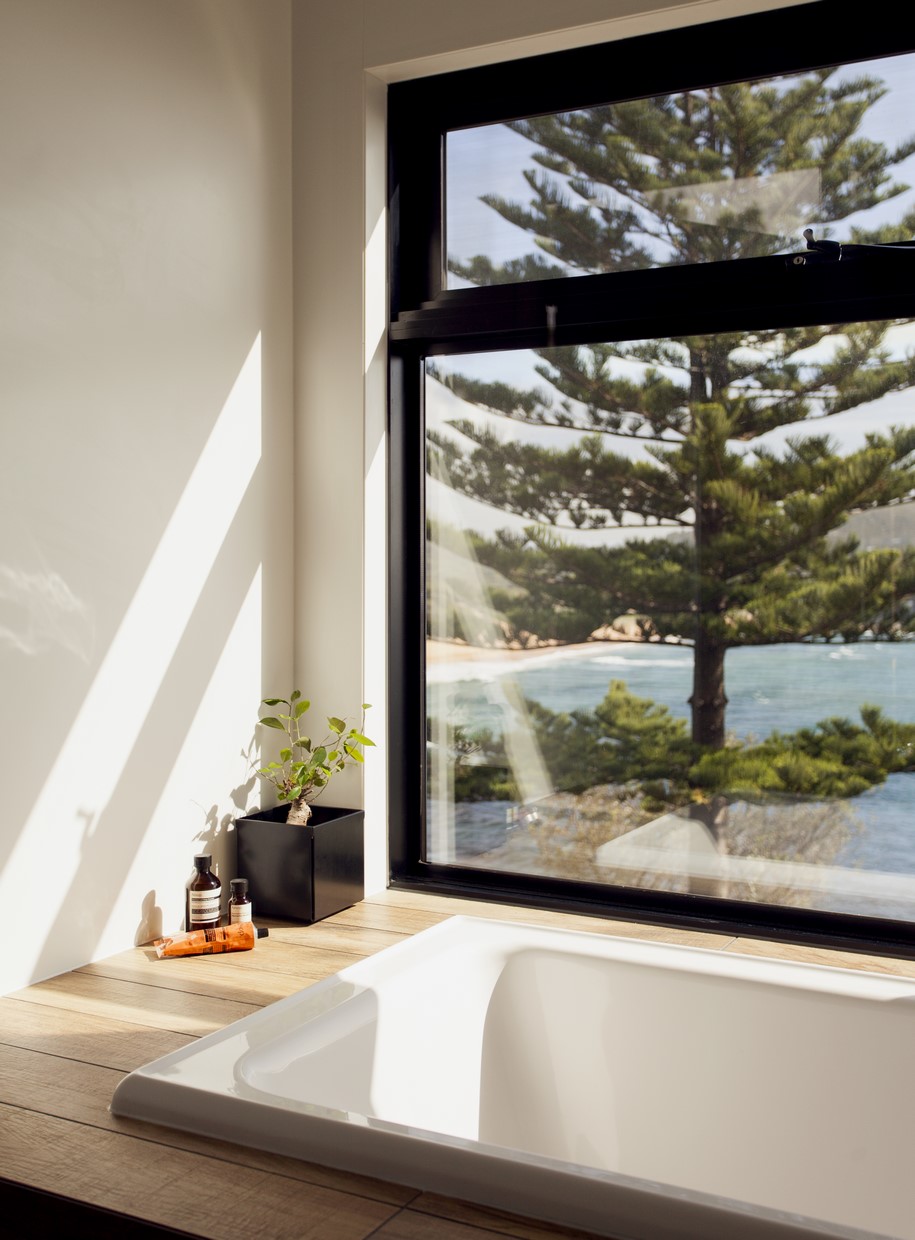 Inspired by the sea and sand, the couple chose blue and orange joinery colours. The residents, who previously lived in Japan, asked that the bathroom be modelled after a Japanese-style bathhouse. Wood-effect porcelain tiles line the shower and tub area. Minimalist and balanced throughout the whole house. Japanese design always inspires and represents many of the qualities we love at ArchiBlox; opportunities to reconnect our lifestyles to the natural environment in a way that positively affects our daily lives with the acknowledgement of the importance of naturally occurring features, such as wind, sun, water, and materials. 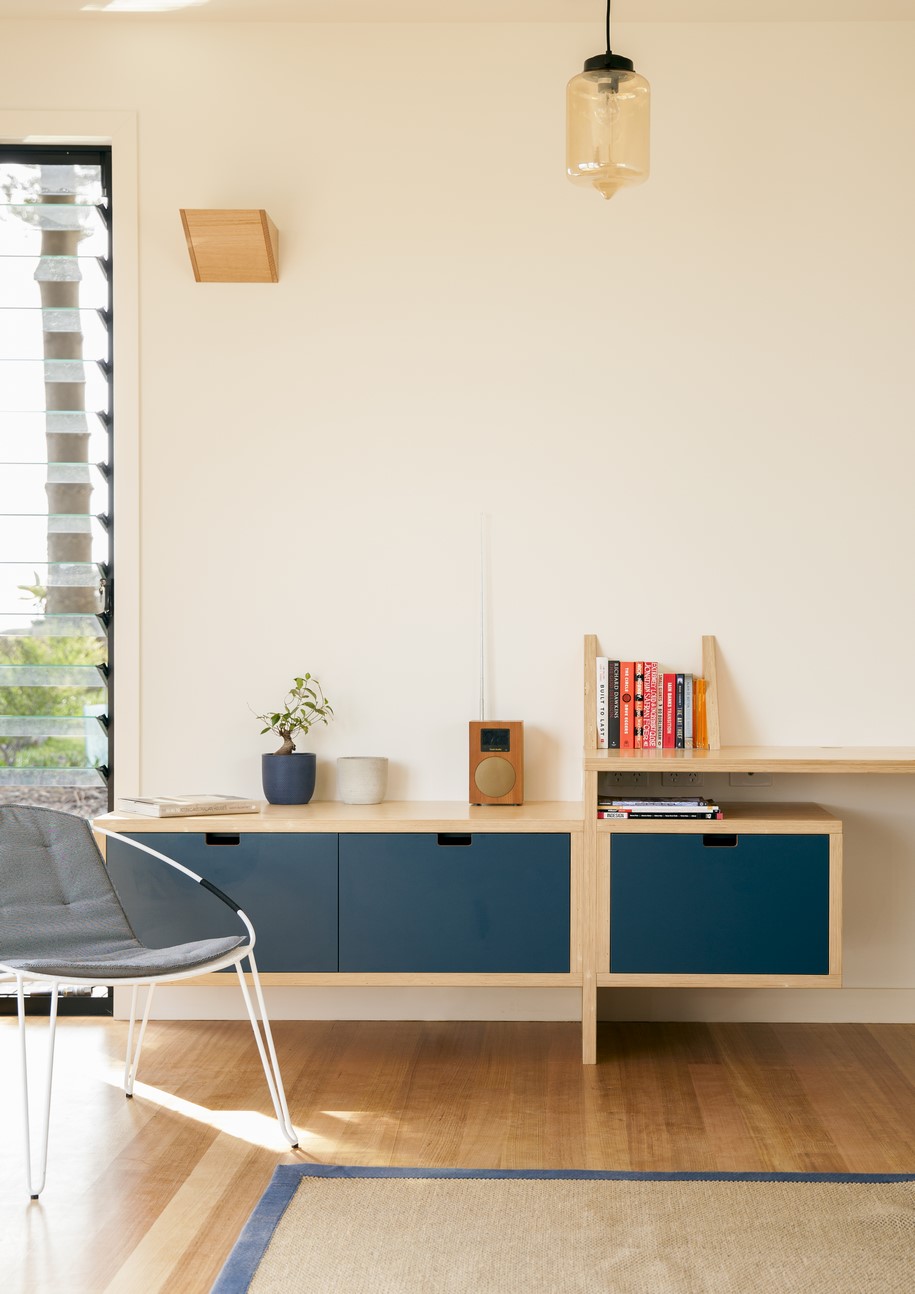 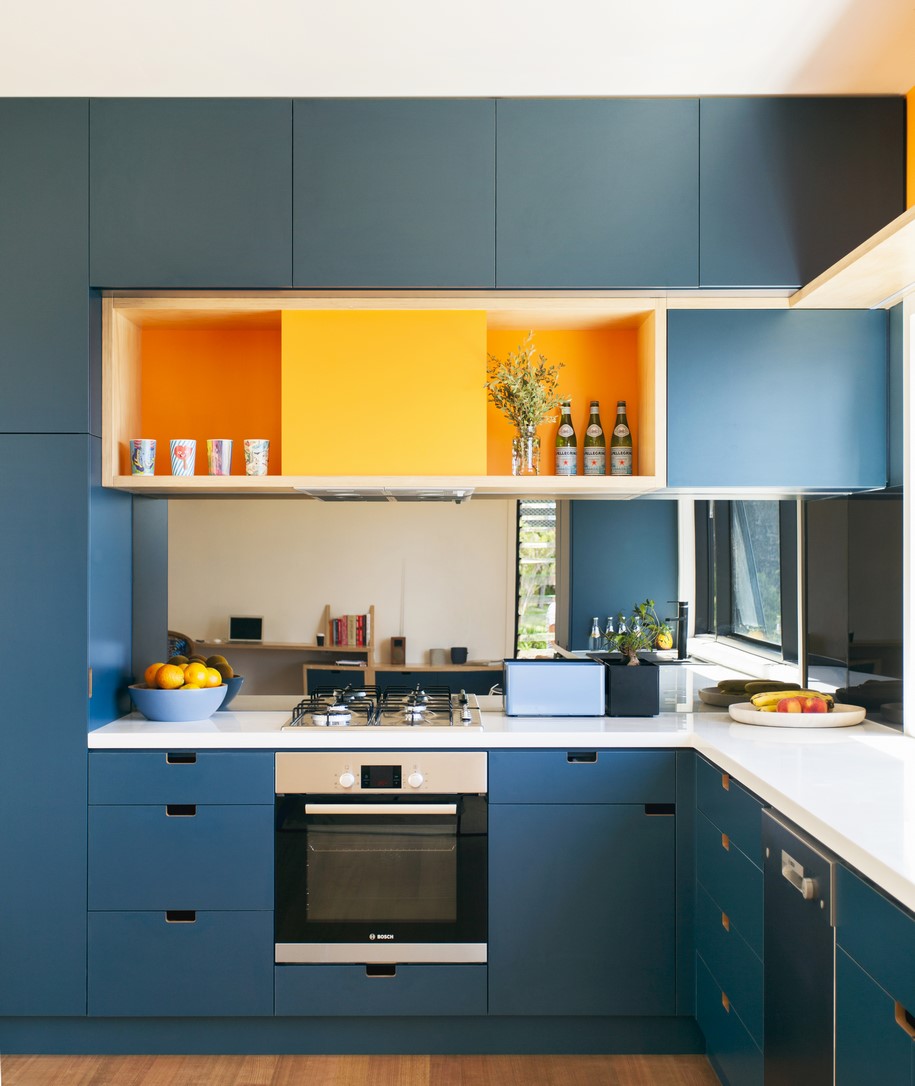 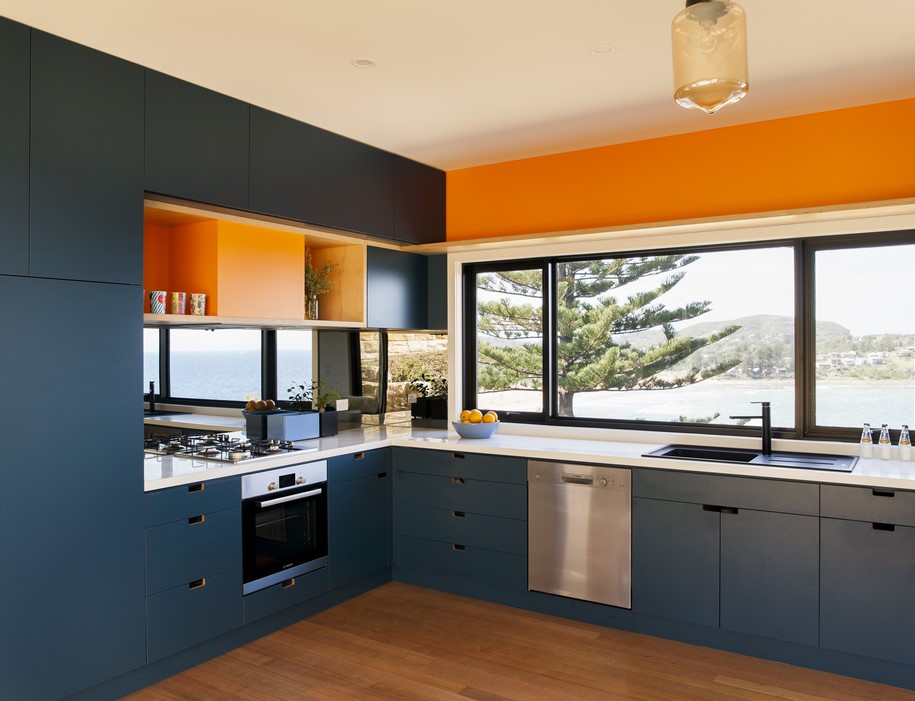 Beyond ArchiBlox’s speedy build time, prefab suited the clients desire to tread lightly on the land with the Avalon House project. After a two-month design process and five months to secure proper permits, the house was installed on-site in just six weeks, meeting the clients’ deadline. 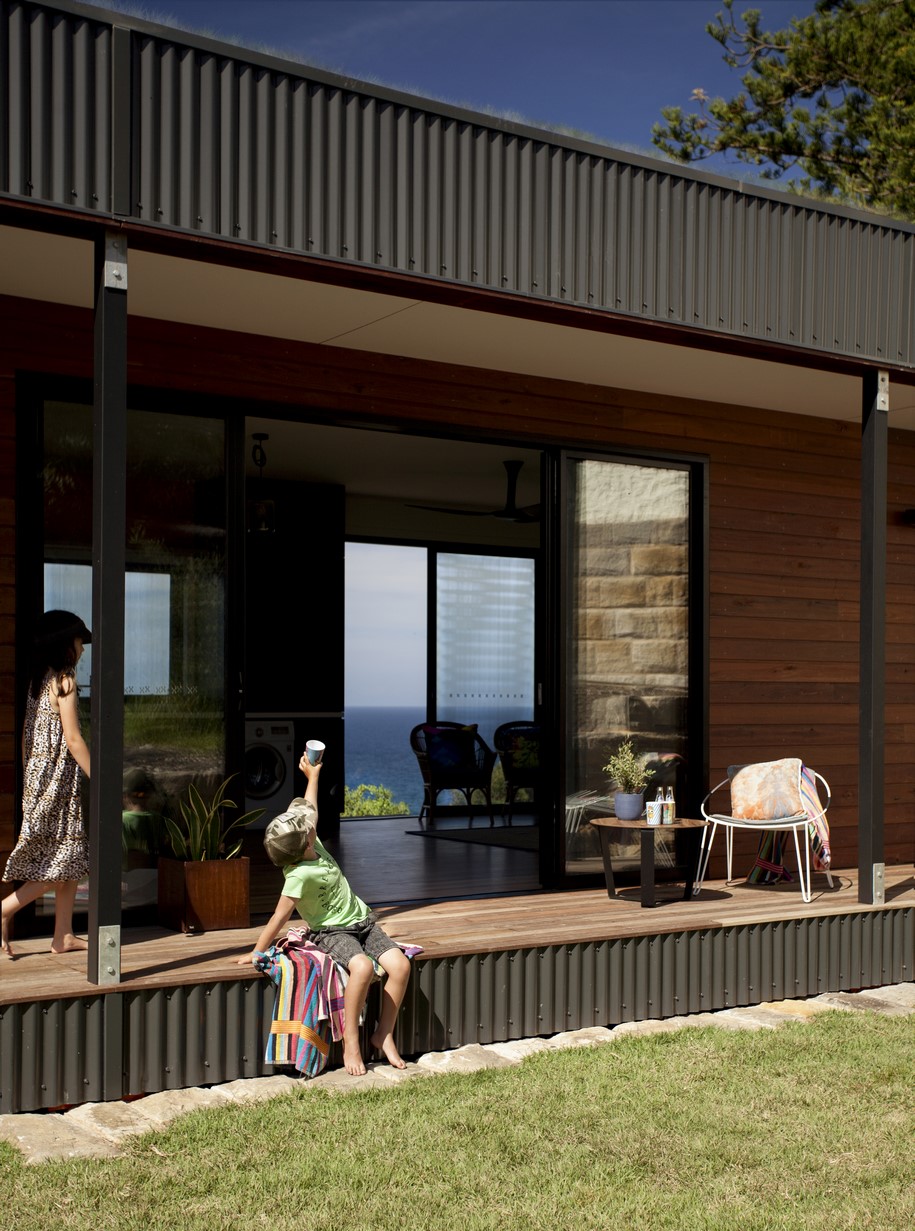 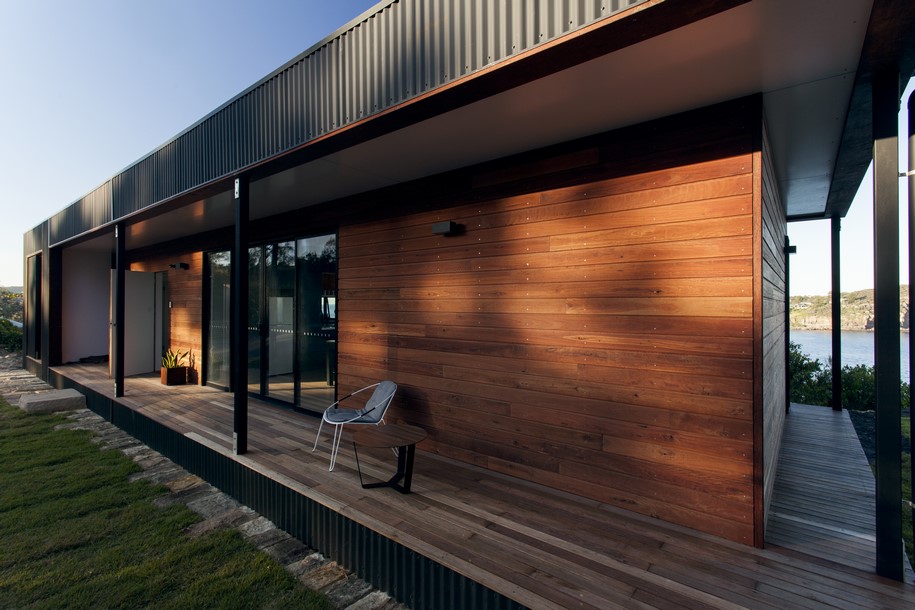 The dwelling is also outfitted with a number of green features, including a living roof that minimizes rainwater run off which also acts as a thermal mass and an east-west orientation that allows cross-ventilation. With modular building the impact on the surrounding environment is heavily reduced by fabricating off-site, ArchiBlox also had careful control over material usage. “We have much better resources to pick out building supplies for our design,” ArchiBlox Architect Bill McCorkell says. “From the start, we designed this particular structure to maximize materials and minimize waste.” 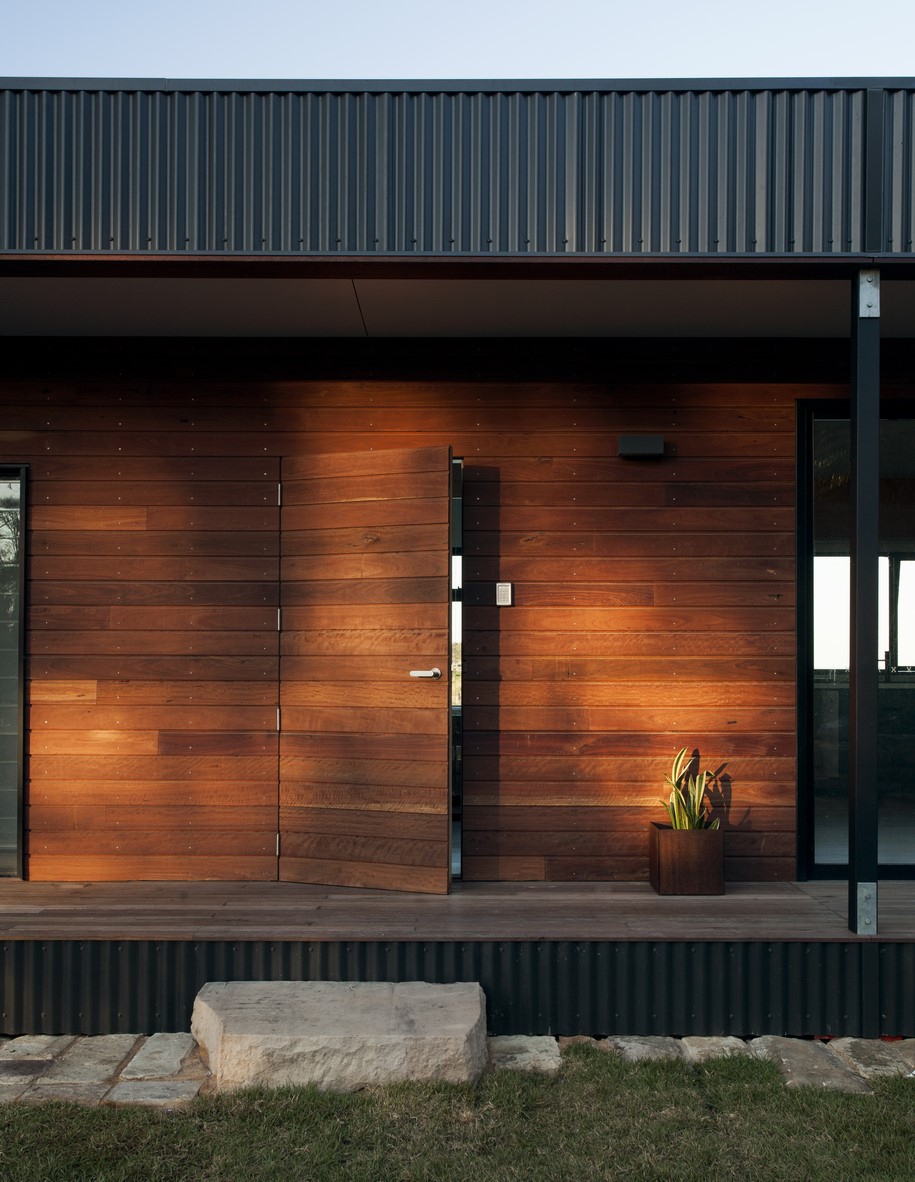 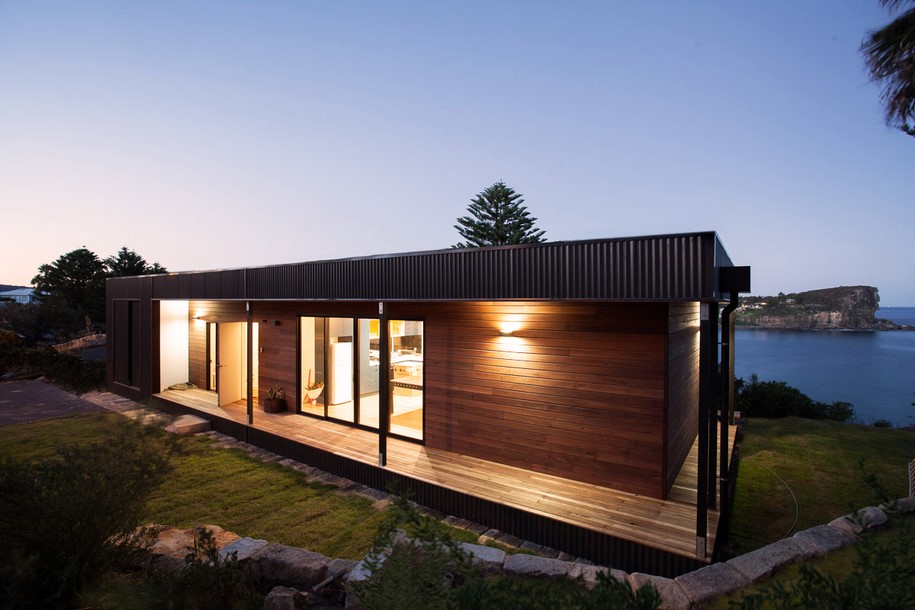 Operable windows are only required to be opened marginally to completely flush the air in the house out after a long summer’s day given the northwesterly wind direction. Their positions are maximized to capitalize on this feature. As strong prevailing winds come up over the cliffs, it was important that the northern interface had no protrusions. Louvres to the windows along the northern façade have been used to reduce solar gain to this interface. 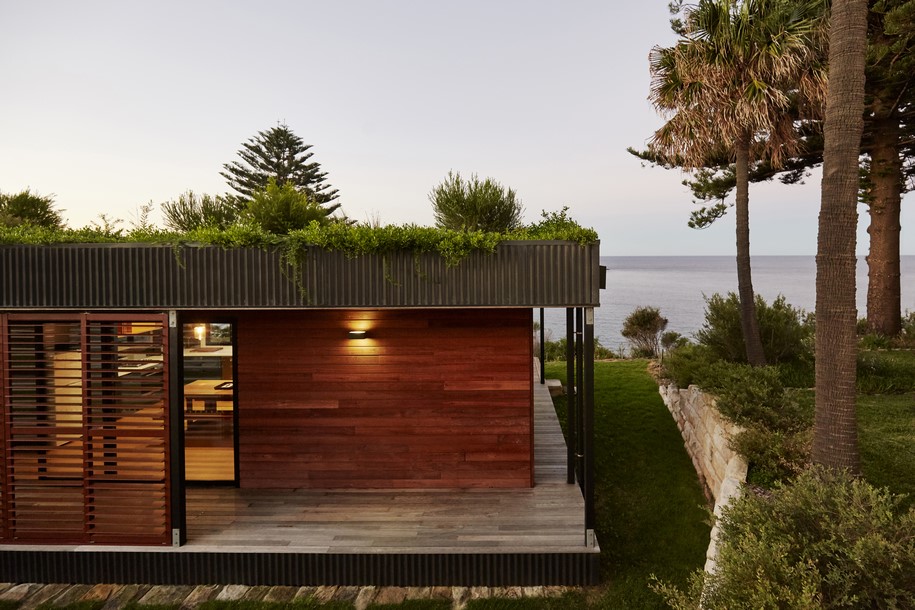 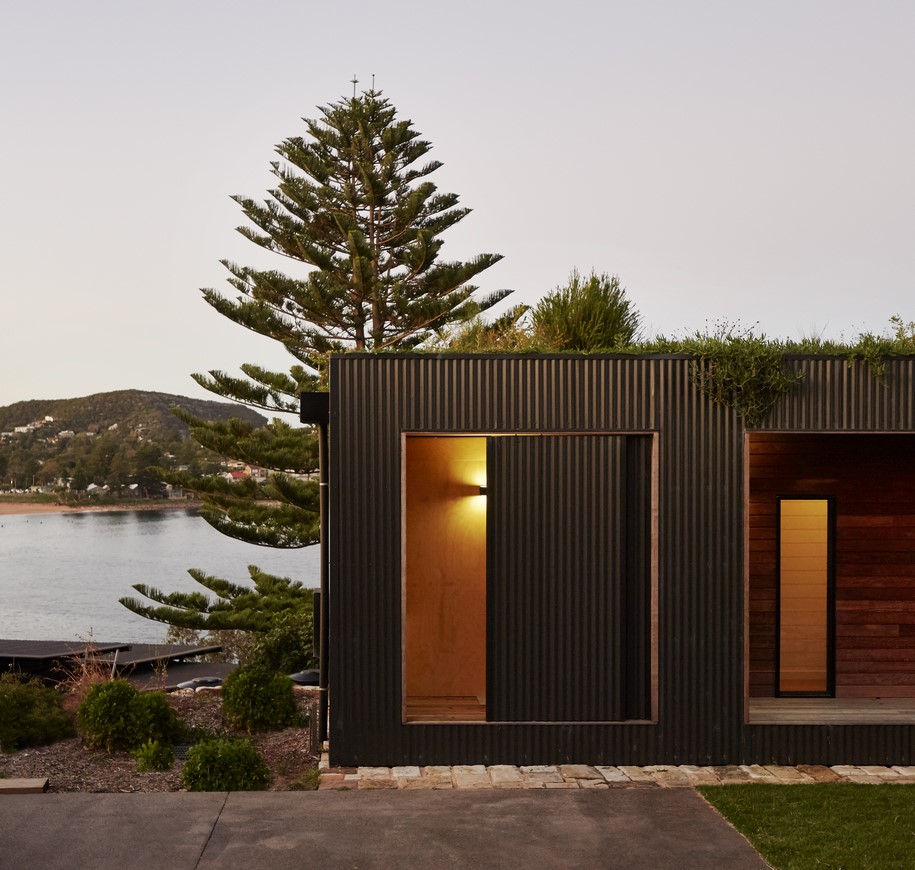 The bulk of the house is wrapped with corrugated iron by COLORBOND® Ultra steel range which is especially designed for severe coastal environments – where there may be a smell of salt or salt spray in the air, approximately 100 to 200m from breaking surf. Blackbutt softens the north-east façade (facing the street and entrance to the house). This is native Australian hardwood is FSC certified timber milled from sustainably forestry methods. 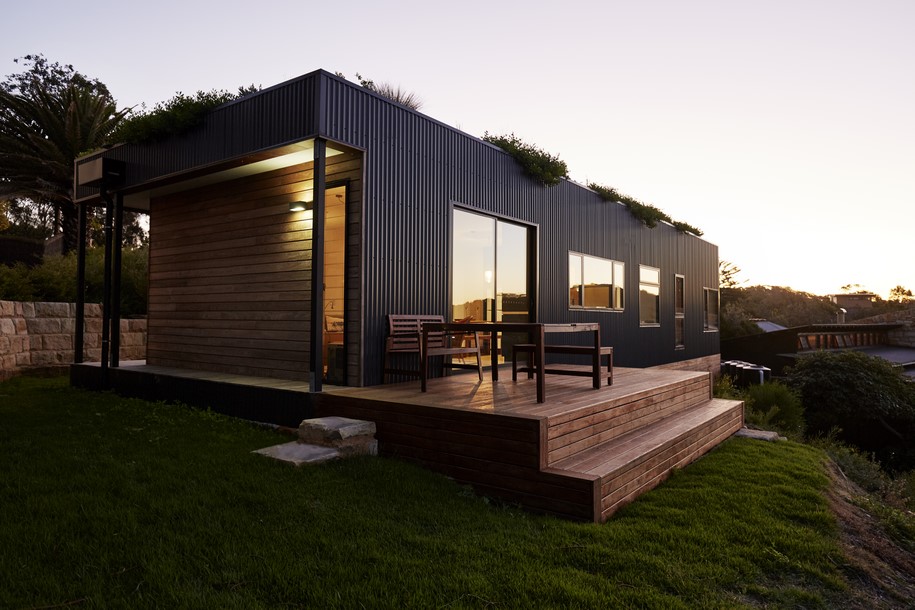 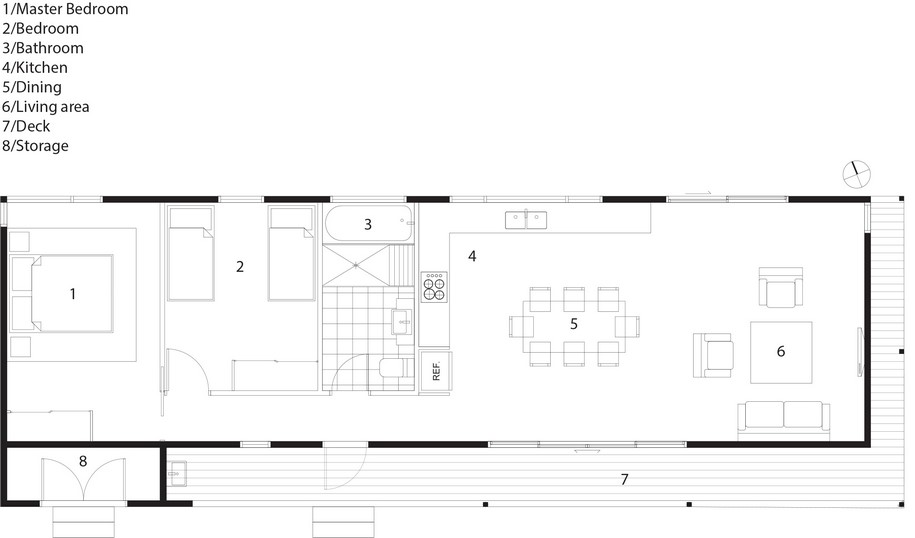 Bill McCorkell hopes the benefits of prefab will continue to be promoted throughout the country. “Prefabricated dwellings were first brought into Australia during the gold rush years of the 1850s as a way to combat housing shortages,” he says. “We are still combating a shortage in the Australian market for architect-designed sustainable dwellings that are affordable. That market is definitely here to stay and will only grow in the coming years.” 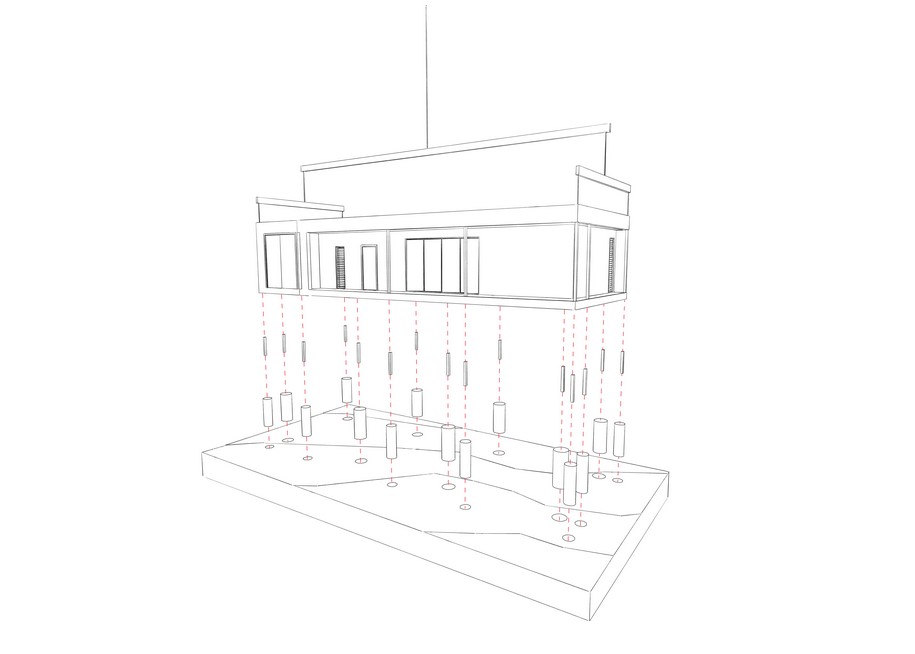 • Lineal structure with east-west orientation allowing cross ventilation
• Maximised North windows which allows the home to enjoy the northern sun
• Green Roof which minimises rainwater runoff and solar penetration
• The roof is double insulated by both a green roof and R6.0 Earthwool thermal insulation and reflective insulation sheet and insulation
• FSC certified external timbers milled from sustainable forestry methods
• Operable windows are only required to be opened marginally to completing flush the air in the house out after a long summer’s day given the prevailing north westerly wind direction. Their positions are maximized to capitalize on this feature
• Aluminium louvres to the windows along the northern façade have been used to reduce solar gain to this interface
• Roof drainage runs to a large aboveground storage tanks
• There’s bulk insulation to walls: 90mm thick R2.5HD Earthwool walls and R2.0 in the floor
• Windows are powder-coated aluminium with double glazing and ‘Breezeway’ louvre inserts and awning/casement windows
• Effective cross ventilation removes the need for artificial cooling aside from ceiling fans in the living area and bedrooms. These fans are a combination of Beacon Lighting fans and Haiku 60-inch Caramel Bamboo from Big Arse Fans
• Rainwater from all roof areas is directed to a 7,500.00 litre above ground tank, which provides water for garden irrigation. There is an elaborate storm water erosion scheme that is set up to protect the cliff face from further erosion which catches all ground surface water across the site and retains it within pits prior to it been dispersed within the ground
• The house uses low energy LED lighting that are a combination of both bespoke Archiblox solutions and Beacon Lighting 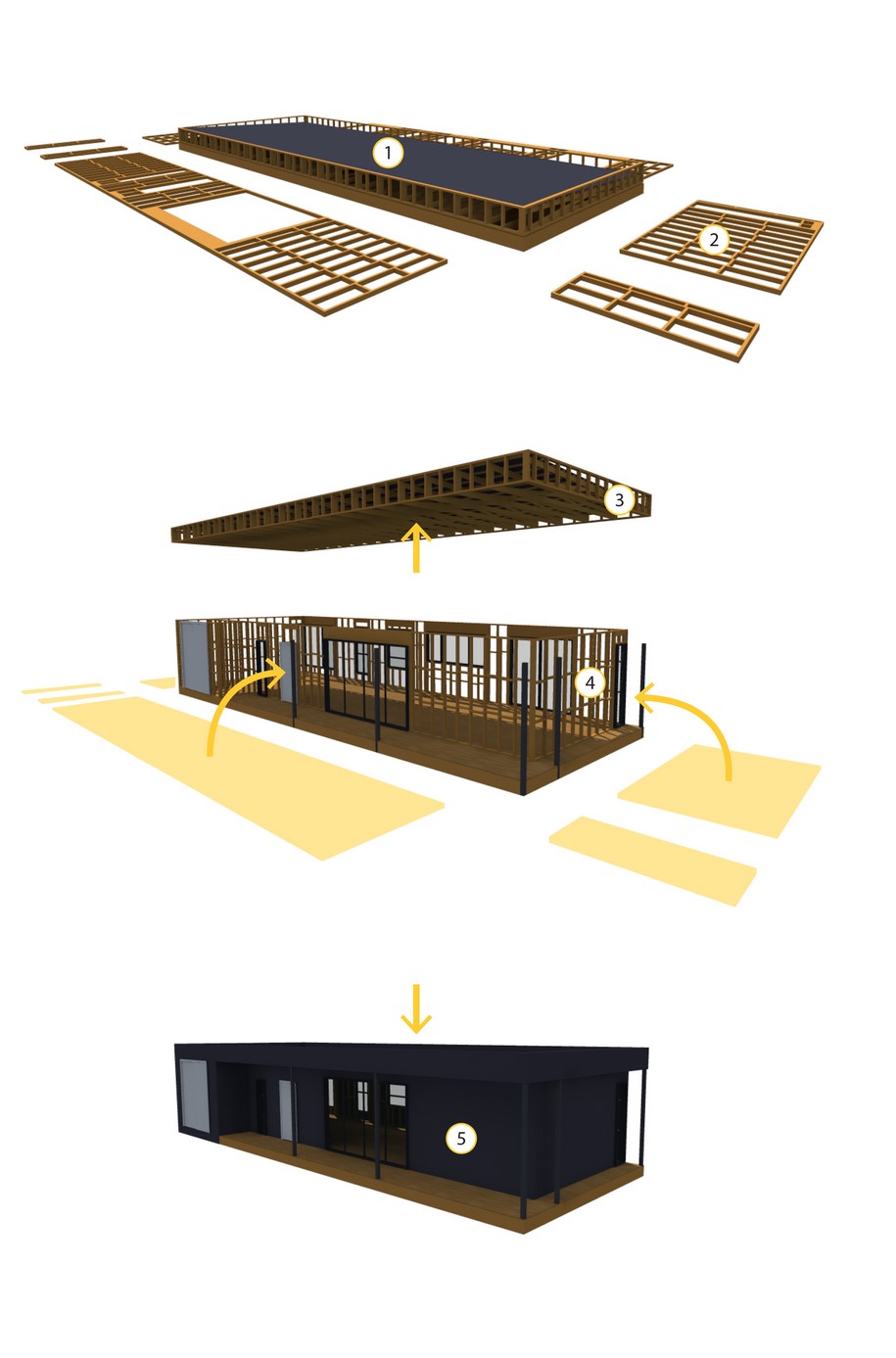 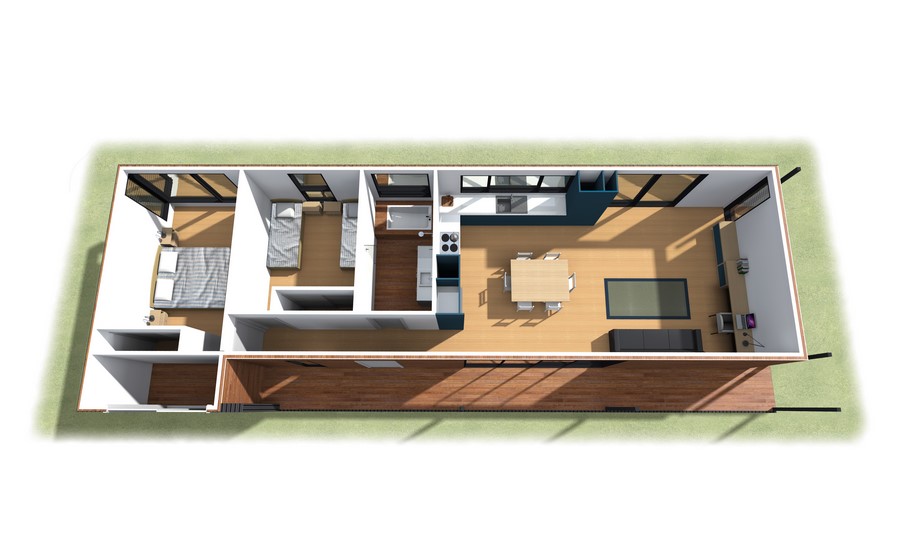 READ ALSO: The Rivesaltes Memorial is compressed between earth and sky, between past and memory / Rudy Ricciotti, Passelac & Roques Architects
0 COMMENTS