The AA Visiting School is being implemented on a global scale in recent years with great success while carrying a predominantly cosmopolitan pedagogical approach. Before the programme travels to Chania in October 2016, the AA visited the city of Thessaloniki. In the case of Thessaloniki the theme “Revelations» has been an experimental architectural installation, as the result of an intensive workshop focusing on generative architectural design and digital manufacturing, involving architectural students and graduates from Greece and abroad.

The installation “Eos» (Ηώς) is an experimental prototype of architectural design and construction; it is the result of the AA Greece Visiting School in Thessaloniki, organized as a collaboration between the Department of Architecture AUTH and the Architectural Association, School of Architecture of London. The project was designed and fabricated on the premises of the Department of Architecture of the Polytechnic School of AUTH, in full use of the capabilities of the Digital Design and Construction Laboratory and its ‘equipment machines. The complete installation was presented in the exhibition hall of the Teloglion Foundation for Fine Arts Museum, thus enabling the visit by the general public.

The focus of this scientific design programme has been the use of digital fabrication via computational design for the creation of a series of parametric proposals on interactive and kinetic morphologies. Within the span of 10 days, Eos (Ηώς), an architectural prototype was developed and fabricated; the design process explored the limits and correlations between architectural design, technical expertise and modern digital construction. Cultural and environmental elements were integrated in the design highlighting a number of topics of contemporary reflection. The implementation of the prototype Eos was made via a participatory process with successive comparative approaches and multiple alternative experiments that yielded a series of very interesting intermediate sketches, drawings and models. These are part of the first stage of the AA Greece Visiting School where design proposals were formed from separate groups of participants, which also were exhibited in the Teloglion Fine Arts Museum. Each of these proposals is described in more detail further below.

Eos is structured as a frame made of 123 pieces of composite wood (MDF) that have been digitally designed and constructed using laser machines and CNC in Digital Design and Construction Laboratory of Architecture AUTH. The component-based prototype has its’ different “cells” covered with Lycra fabric fixed in multiple places. Arduino microcontrollers that were assembled by the participants enable independent interactive features by ensuring movements on Eos’ surface in selected locations.

Apart from the motor mechanisms, the prototype incorporates visual animations which are arising from investigations of Thessaloniki’s urban fabric and are 3D mapped and projected on Eos. Thus participation and interactive relationships with their guests is encouraged through the controlled movements and visuals of the surfaces in real time.

Furthermore the AA Greece Visiting School in Thessaloniki included lecture series by a set of distinguished architects from the international arena. Joris Pauwels gave a lecture representing the architectural firm Zaha Hadid Architects and Dr. Marjan Colletti, professor at the Bartlett School of Architecture, London UCL and the School of Architecture of the University of Innsbruck.

Special thanks are due first to Alexandros Kallegias who is the AA Greece Visiting School Director and the Director of the AA Visiting School programme Dr. Christopher Pierce, and the teaching team consisting of: Alexander Kallegias, Yue Shi, Eirini Vouliouri, Elina Pattihichi, Arsenis Zachariades Alexandros Tsolakis and Sylvia Georgiadou. Host school coordinators from the Department of Architecture AUTH were professors Nikos Kalogerou, Stavros Vergopoulos and Anastasios Tellios. For the fabrication the AA Greece VS collaborated with Dinos Pavlidis and Vasilis Zafranas of the Digital Design Laboratory Construction.

For the design composition and implementation of the project our warm congratulations go to all the following participating students and young architects:

The design proposal of each team is described here:

Benn or Bending the Grid

Acknowledging the Grid as a paradoxical system where its own theoretical yet possible forms are superimposed over the real construction it promises in its two-dimensionality, our team decided to proceed to a research of a component that would materialize this amplitude of spatial metamorphosis. After fabricating a static linear component, translating the Grid atom -the line- into a mere object, we moved forward in a quest for that one alteration that would unlock the third dimension for our component and ultimately, our new system. Flexibility played a critical role at that point since our static linear component had restricted abilities due to the rigidity of the material in use. By applying certain cutting patterns on the material, the desired flexibility was achieved, giving the new system the ability to expand in three dimensions. We firmly believe this system has a vast amount of potentials that could not be explored in the given time and therefore, our team plans on moving forward to more tests in order to explore all of these inherent typologies that the new Grid promises in its form and concept.

Seeing the city as a whole we realise the differentiability of the area in different places in terms of its density. After researching through different maps and data of the city, we analyse the density of the whole area of Thessaloniki through three parameters: first, the relationship between the built and unbuilt, second the traffic network and, finally, the land uses of the city.

Different places across our system are less or more dense depending on the location of the area. Our machine is continuously stimulated by the ink that it is inside our three main cores. Where the city is less dense there is less ink also inside the tubes. Where the city gets denser the visitor experiences immediately the diversity of the city. By taking the visitor around the design there is a chance of communicating with the whole concept thus also with the whole city.

Our team first approached the project by finding the Vergina Sun, an image or a form that was imbedded in the historical and cultural context of Thessaloniki. From our form finding in Vergina Sun we found isometric triangles on a central focal point. We further then explored what we could do with the triangle from central focal point within a circle.

With the hexagon being our base polygon we decided to layer and form geometric clusters.

Having broken down our hexagon and reformed it using our natural steps we learnt from the spider web and the snowflake. We explored how we could apply the layering of the hexagon and how we could start to use different variables to add more kinetic value to our form. We decided on light and its changes and levels throughout the day. We can up with statistics on the light levels in relation to length of the day. After compiling our statistics we were able to create relevant gradients and clusters to the cellular structure.

The main design ambition of our team was to create an installation that would not only be impressive and sculptural but also responsive and friendly. We aimed for a large scale design that could not be overlooked and that it would convey information about the university life, the beating heart of Thessaloniki.

The design was achieved by the use of fabric, a softer and more adaptable material that would respond to the visitors’ movement in real time. In the form-finding process, both digital and physical models were used. After extensive tests and alternatives, a tree-like form was chosen, in order to highlight the importance of the university in Thessaloniki’s grid and also for aesthetic and structural reasons. The design is such as to allow further development or expansion. Moreover, it could adapt and refer to any environment it was placed in, by the use of a different grid and attractors, while maintaining its general form and concept.

Our intention is to create a “water” film that really interacts with human presence. We invent a fluid surface that simulates the crossing of the room by users, as if water was materially present.

In order to fabricate our vibrating surface, we design a performative skin consisting of wooden elements deriving from the mesh triangulation that are attached to a flexible membrane.

The membrane plays the role of an overall hinge with high potential, as it expands and shrinks according to external forces, as well as form-finding necessities. This constructive system permits multi-axis tension, rotation and all that lies within the deformation limits of the Lycra fabric.

Additionally, we have considered the visualization of an under-water feeling by a 3d mapping projection that interacts with the user by proximity sensors.

During the prototyping process we experimented with isometric and non-uniform grids, with various material thicknesses and eventually with connection techniques of the panels to the fabric.

Finally, we have considered the permeability possibilities for the surface of the panels, by means of using simple frames, penetration patterns or just taking advantage of the transparency rate of the stretched fabric.

The perception of Thessaloniki as a passage during the ages, led us to the collection of data of the last decades of the movement of population in relation to the city. As a consequence, our ambition was also to create a portal in space because the area itself is a passage to the exhibition hall. Therefore, we put the numeric data of the population movement as fluids in space, indicating three different directions and then isolated the areas of densities. These densities were transferred as projections and recesses on the final surface.

Through experimentations on the form, the components and the interconnections, we ended up on a structure that consists of 3 main layers. A stable base that represents the skeleton, curvy components that through multiplication fit on that and create a smooth effect of a surface that “flows” in space and then lycra, that gently covers the structure.

On a further development of this project, a kinetic part of some components or a projection mapping related to the data collected from the city, could be considered as handlings that would enhance and highlight the curvature of the structure in the certain area that it was designed to fit, as well as if it would be placed in different spaces. 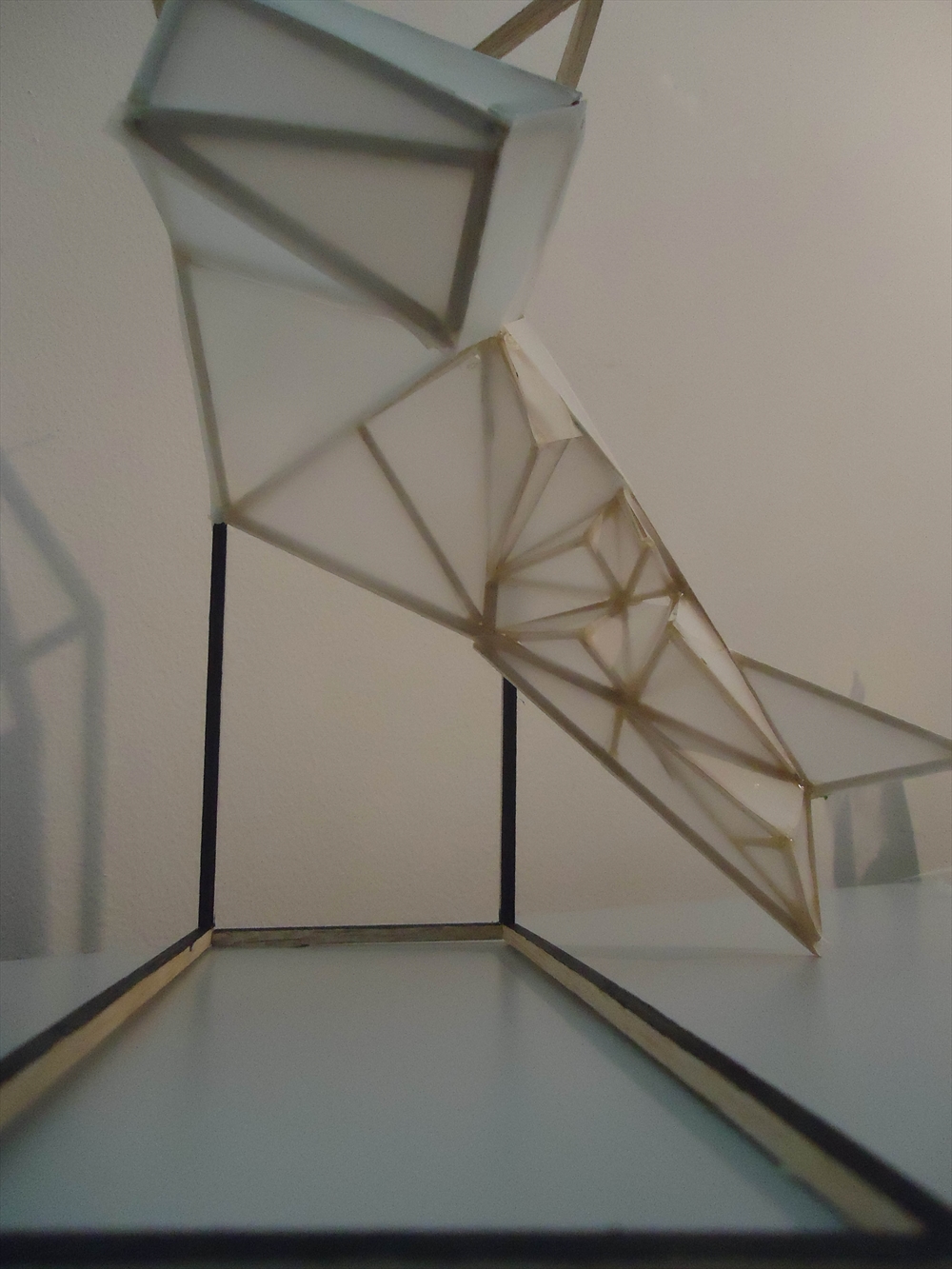 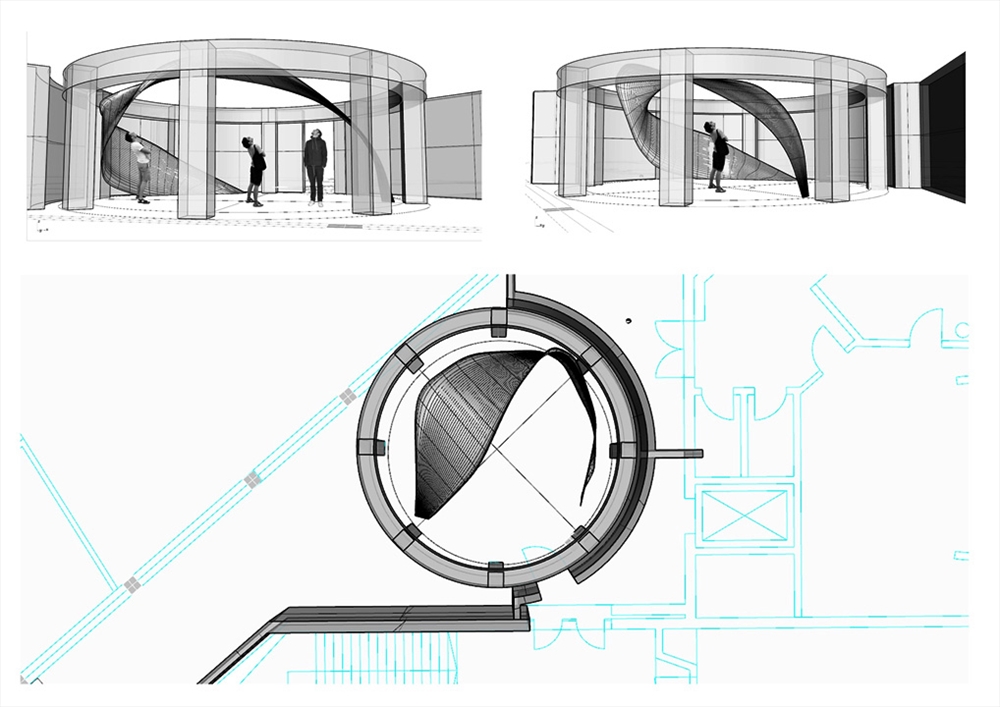 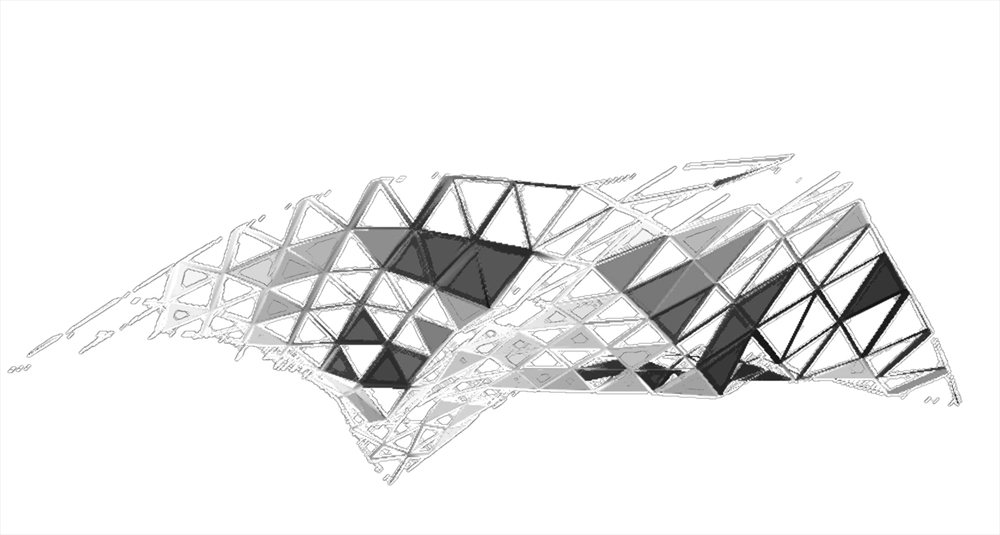 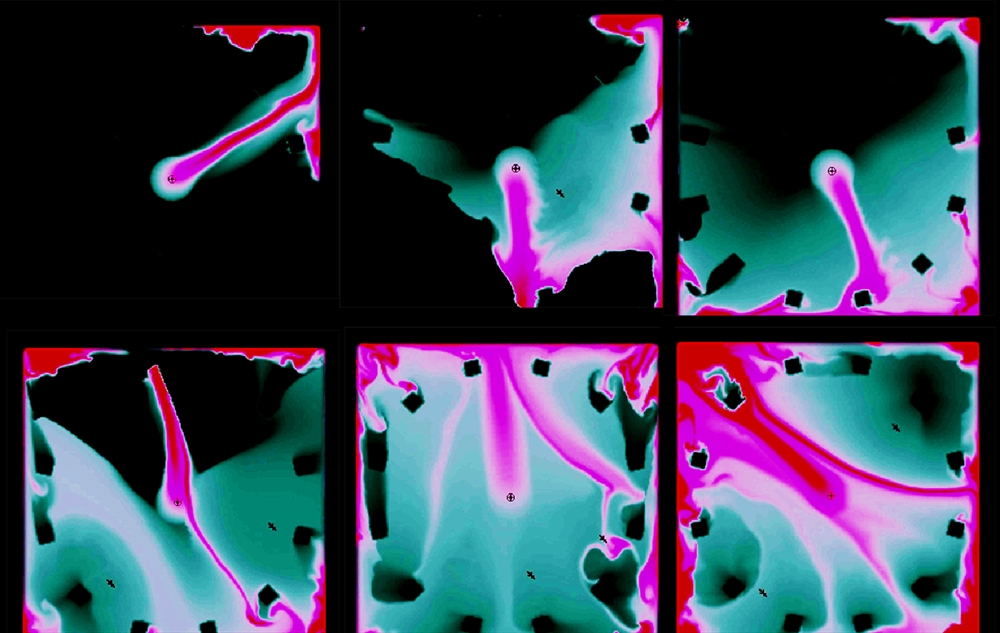 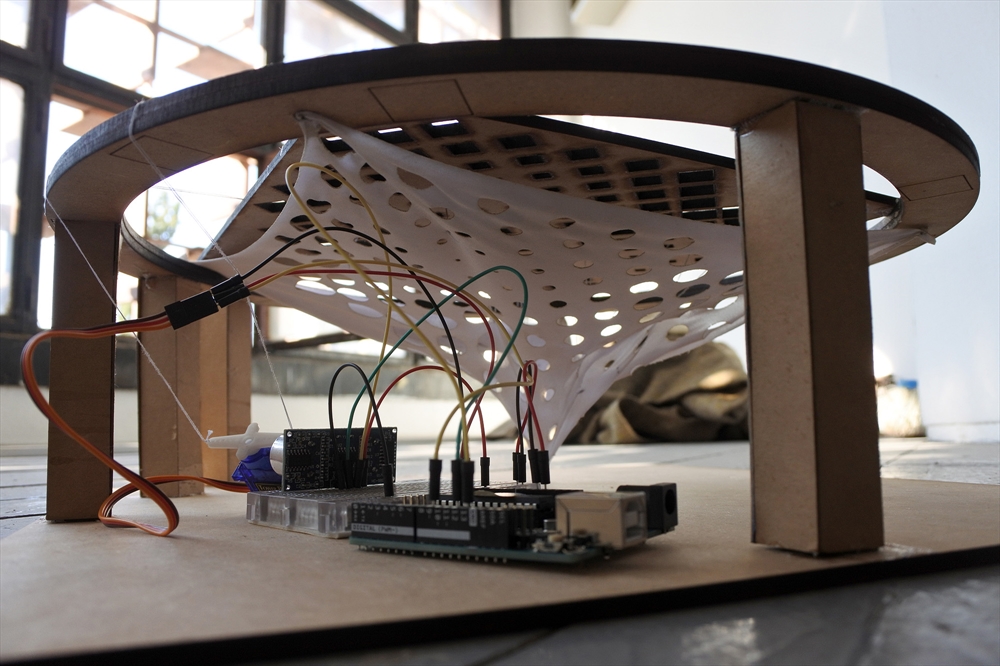 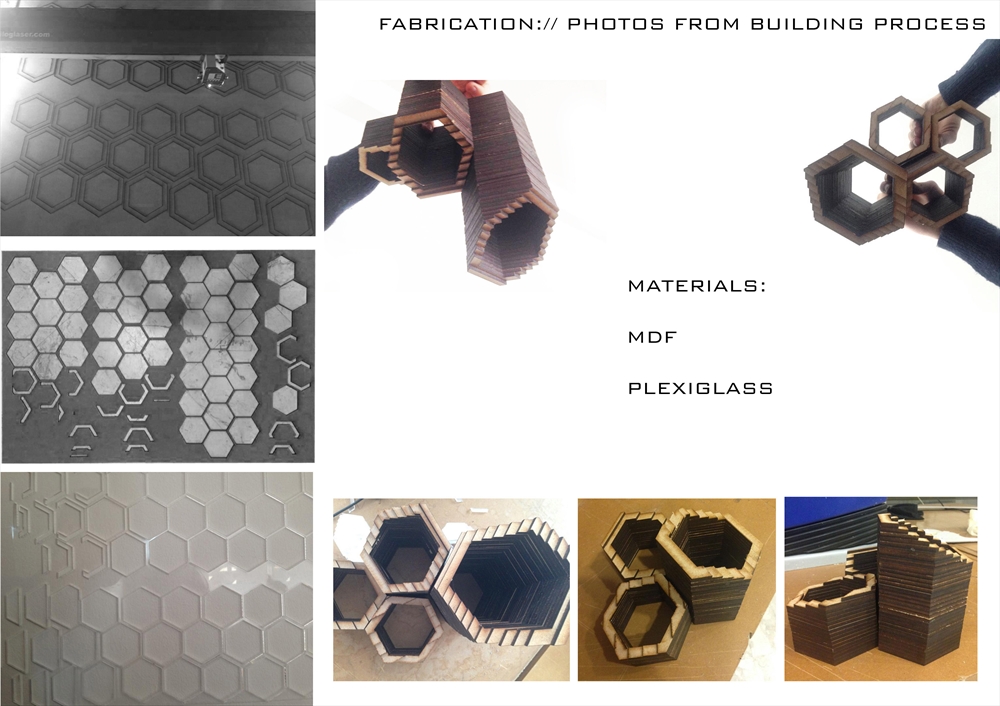 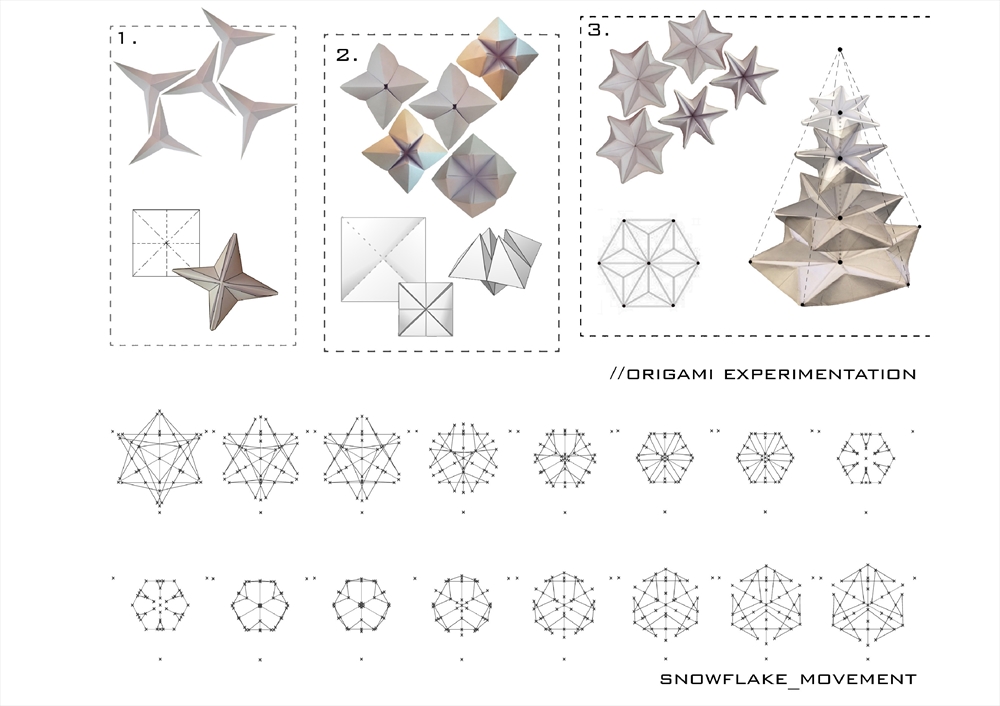 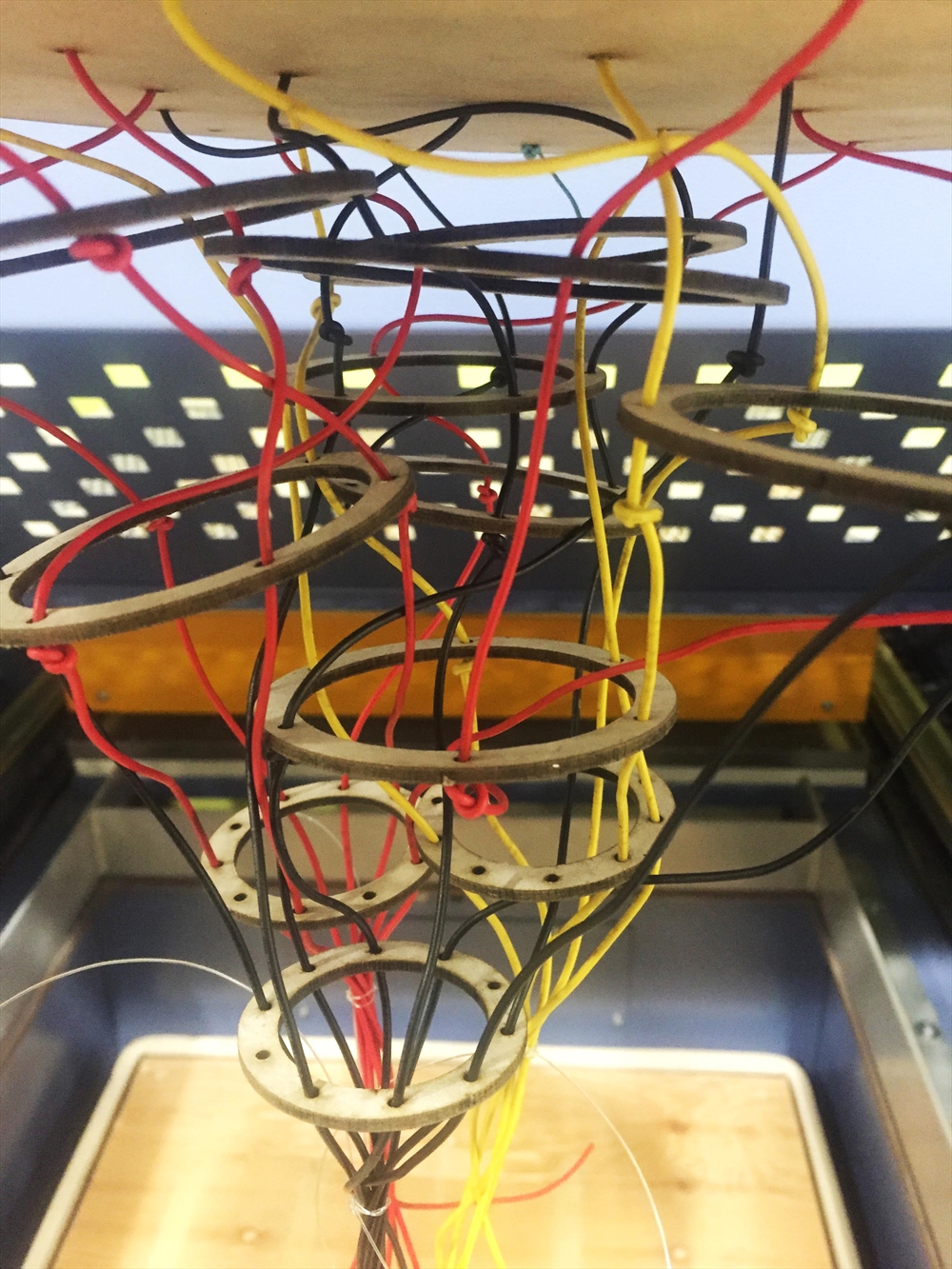 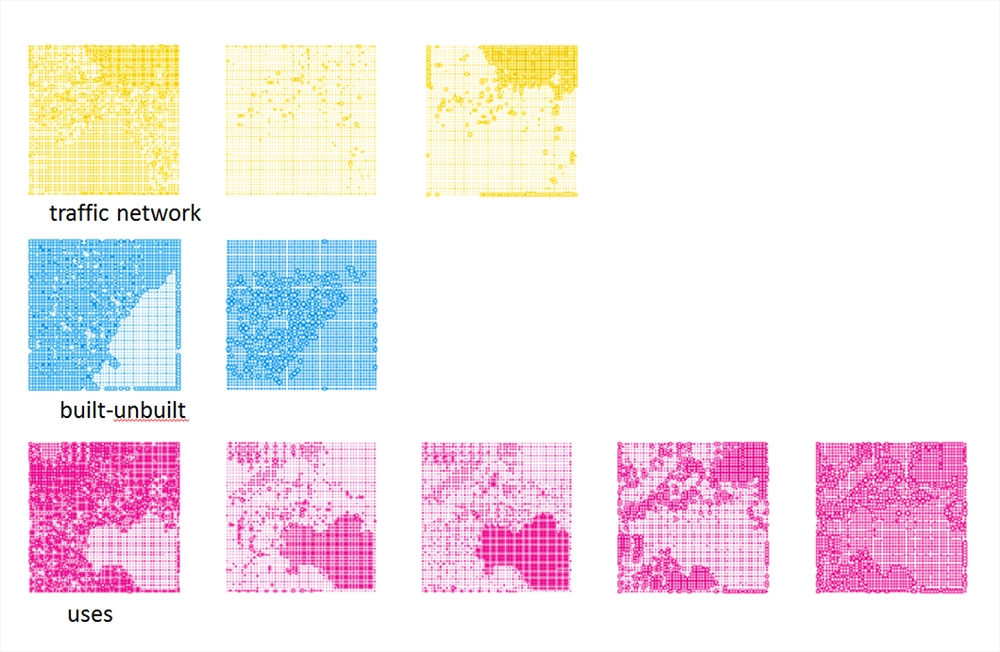 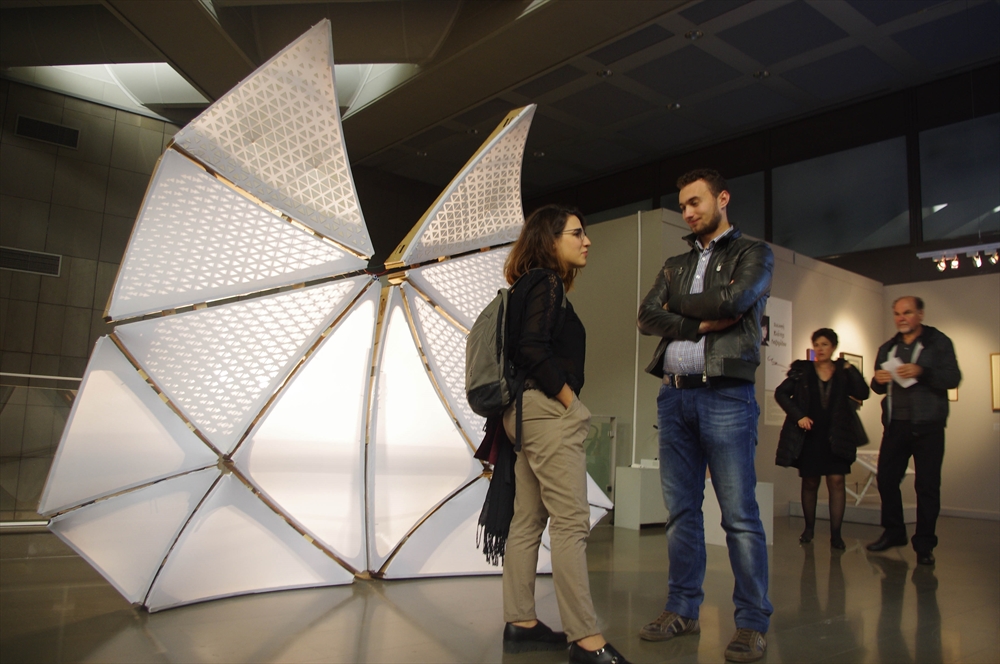 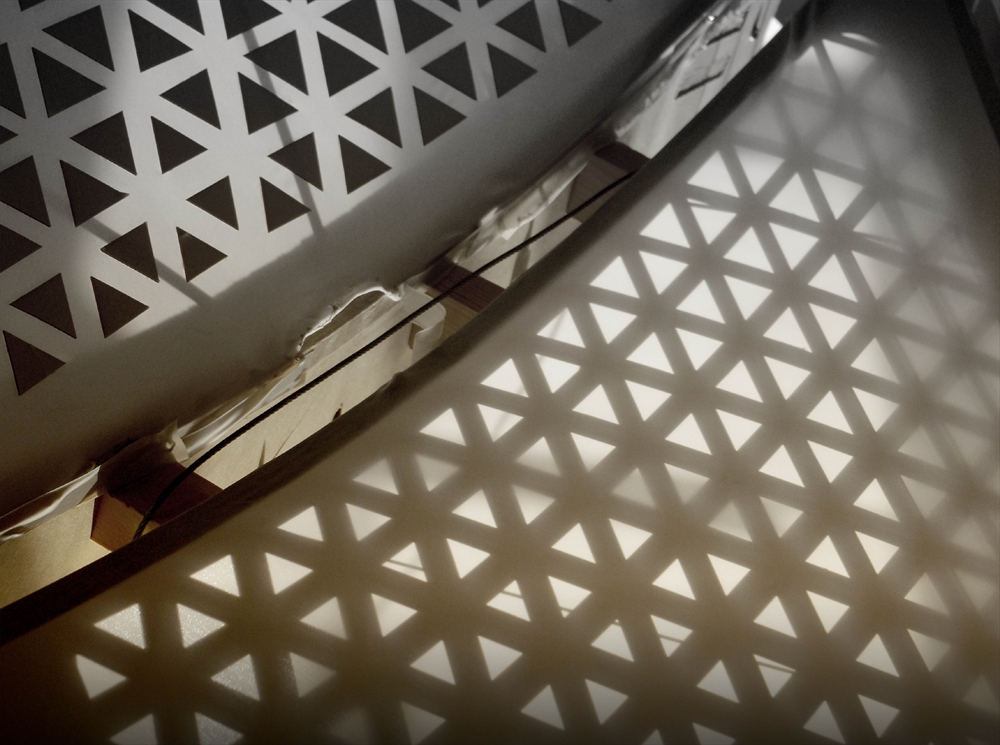 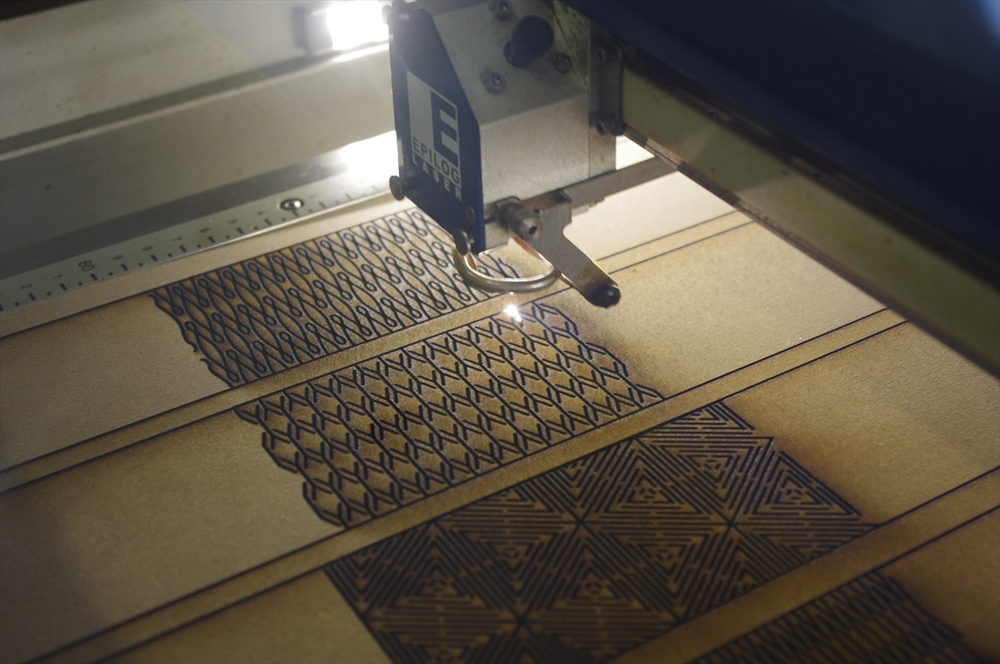 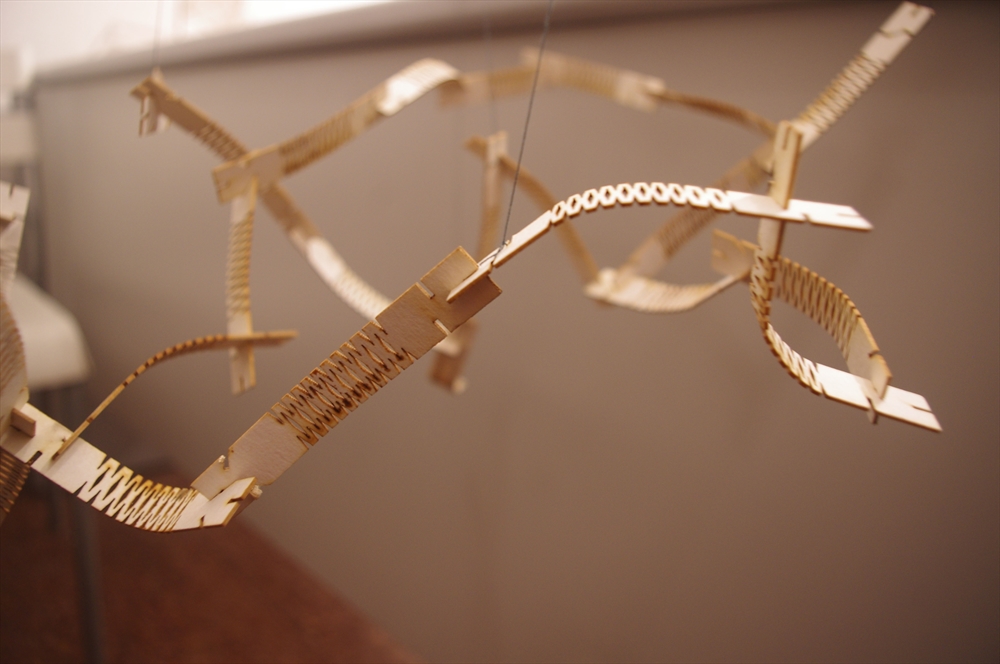